Arthritis is a term used to describe ‘inflammation of the joints’ but truth being told it is a debilitating condition.

The symptoms of arthritis at times may come and go but in some conditions, especially age-related, these symptoms worsen health.

Arthritis can even cause permanent changes to the joints. Some types of arthritis affect heart, kidney, lung, skin as well as the joints. Major types include:

Around 43.2% adults with arthritis report limitations in daily activities.

Treatment involves administration of painkillers, DMARDs and change in diet and lifestyle.

Reduced response to conventional treatment is leading to research for a safer, fast acting and effective cure.

Since we are already looking alternatives why don’t we see food and nutrition can help.

Flaxseed oil has been gaining nutritional importance in recent times owing to its health benefits in various conditions.

What is flaxseed oil?

Flaxseed is known in Latin as Linum usitatissimum which means ‘very useful’. Initially its fibre was used to prepare cloth but now every part of the plant is used commercially.

Flaxseeds are of 2 types: brown or yellow/golden. Both are rich in omega 3 except for 1 type of yellow flax called solin- its poor in omega 3 content. Protein content of flaxseeds is 20-30%.

Flax contains compounds that have estrogenic activity. It is a good source of calcium, magnesium, phosphorous and potassium.

Traditionally it is said to be beneficial in skin disorders, kidney disorders, wound healing, anti-inflammatory remedy, pain, and cough-relieving, etc.

5 Benefits Of Flaxseed Oil In Arthritis

A typical Western diet provides 20-25 more omega 6 fats than omega 3 and this said to be responsible for inflammation.

Flaxseed oil is rich in omega3 fatty acid called alpha linoleic acid(ALA). Once consumed this ALA is converted to eicospentaenoic acid (EPA).

Arachidonic acid is the prime molecule in initiating production of inflammatory enzymes.

EPA inhibits the conversion of Arachidocnic acid to prostaglandin 2 and leukotriene 4- both of which have pro-inflammatory action. They cause pain, redness and swelling.

EPA inhibits the production of these enzymes and lead to production of less inflammatory agents such as prostaglandin 3 and leukotriene 5.

Additionally EPA inhibits production of inflammatory mediators such as TNF-alpha and Interleukin-1.

James et. al report that use of flaxseed oil in the diet reduces the production of inflammatory mediators.

Flaxseed oil is found to act on acute phases of inflammation like migration of inflammatory cells and dilation of blood vessels.

This inhibitory action of flaxseed oil is comparable to that of aspirin.

What does this mean? Flaxseed oil contains omega 3 fatty acid, ALA which inhibits the production of inflammatory mediators. This could be of help in reducing inflammation in arthritis.

2. It has anti-arthritic property

The scientists claim that this anti-inflammatory effect could be a result of inhibition of arachidonate metabolism (explained above) and reduced vascular permeability (reduced dilation of the blood vessel which limits migration of inflammatory enzymes and immune cells).

Based on these findings researchers conclude that flaxseed oil has anti-arthritic and disease-modifying property and dietary incorporation of flaxseed oil will be therapeutic for arthritis and other inflammatory disorders.

What does this mean? Animal studies demonstrate arthritic potential of flaxseed oil and suggest that it can help reduce swelling and inflammation. 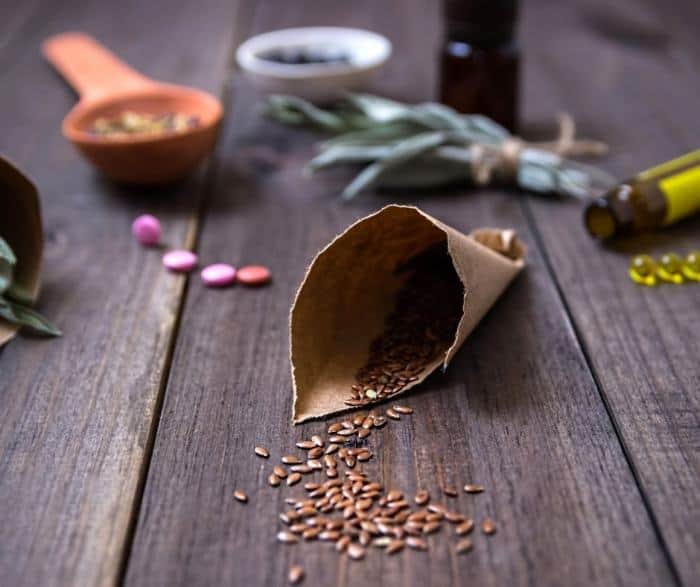 Kaithwas et. al reported that in an animal model flaxseed oil increased pain bearing threshold and this pain killing activity was comparable to that of aspirin.

What does this mean?
By virtue of its anti-inflammatory effect, flaxseed can help reduce pain and research suggests that its pain killing activity is comparable to that of aspirin.

4. It is safe for the stomach

Consumption of painkillers and non steroidal anti-inflammatory drugs can cause gastric side effects such as gastric erosion and bleeding.

In an animal study flaxseed oil was found to protect from gastric erosions caused by painkillers, psychiatric medications, ethanol and stress.

Another study reported hat anti-ulcer effect of flaxseed oil is comparable to that of ranitidine, a drug used to treat acidity and GERD.

What does this mean? Flaxseed oil has anti-ulcer activity which can protect from gastric side effects caused by painkillers.

5. It can reduce complications associated with arthritis

Individuals with arthritis or other inflammatory conditions are at twice the risk of developing heart diseases than normal counterparts.

Flaxseed is beneficial in metabolic syndrome.

A human study reports that milled flaxseed with lifestyle changes decreased the prevalence of metabolic syndrome by 82% and reversed central obesity by 36% in the study population.

A clinical trial was conducted where individuals suffering from Sjogren’s syndrome associated with lupus and rheumatoid arthritis were supplemented with flaxseed oil.

The study lasted for 6 months. It was that the groups receiving flaxseed experienced reduction in eye inflammation and Sjogren’s syndrome.

What does this mean? Flaxseed oil supplementation reduces obesity, metabolic syndrome and there by reduces risks of heart diseases. It also benefits in autoimmune conditions associated with arthritis like Sjogren's syndrome.

The only study that evaluates the effectiveness of flaxseed oil in arthritis is by Nordstrom et. al in 1995.

Nordstrom et. al report that ALA from flaxseed oil does not have beneficial effect on rheumatoid arthritis symptoms despite of increase in ALA in treatment group.

The possible explanation for this well explained by Harvard Health.

1 tablespoon of flaxseed oil provides 7g of alpha-linolenic acid (ALA) making it the richest source of ALA.

But the problem is that this ALA is not efficiently converted to EPA and DHA- omega 3 fatty acids found in fish oil. So 1 tablespoon of flaxseed oil is worth to 700mg EPA and DHA.

In terms of human studies there are some that show that flaxseed oil brings a reduction in inflammation while some show it does not affect inflammation.

How to take Flaxseed/ Flaxseed oil for Arthritis?

You can consume flaxseed tea. Soak uncrushed flaxseed in water for 30 minutes. Remove the seeds and warm the water before consumption.

Flaxseed drink can be prepared by mixing 1 tsp of flaxseed powder in hot water. Brew and drain it and consume 1 cup a day.

Mix 10g of flaxseed flour in honey and consume this paste. Around 30-40g of this paste should provide relief in inflammatory conditions.

How much Flaxseed oil to take in Arthritis?

Flaxseed oil are marketed as liquid or capsules.

A dose of 2.4-3.6/ day is found beneficial in increasing omega 3 fatty acids level in the blood as per studies.

If used in liquid form the recommended dose is 15ml. Consult a health practitioner prior to taking flaxseed supplements.

Flaxseed oil may have drug interactions with painkillers like paracetamol and ketoprofen.

Avoid taking flaxseed oil at the same time when taking other medications since it slows down absorption.

Flaxseed oil is rich source of omega 3 fatty acids which are proven beneficial in arthritis and reducing inflammation.

Due to reduced conversion of these fatty acids to useful biomolecules which could limit inflammation, it is possible that no human clinical trial proves flaxseed oil’s efficacy in arthritis.

However many other research studies prove flaxseed oil’s anti-inflammatory action and it can also help in treating risk factors and complications associated with arthritis.

Including flaxseed oil in diet is still a great option due to its many health benefits.

READ THIS NEXT -
Benefits of Tripterygium Wilfordii (Thundergod Vine) for Lupus
Can Vitamin D Benefit in Lupus?
5 Proven Benefits of Soybean For Osteoarthritis [UPDATED]
4 Ways Wintergreen Essential Oil Can Benefits in Arthritis?

1 thought on “5 Benefits Of Flaxseed Oil In Arthritis”