Gout is a type of arthritis which is commonly known as “the rich man’s disease”.

It is because it is caused due to high intake of proteins which results in elevated amounts of uric acid in the bloodstream.

Gout is a diet-related disease and thus demands some diet changes in addition to the commonly prescribed drugs.

In fact with proper dietary intervention, symptoms of gout can be successfully controlled and kept under check.

Numerous healthy and tasty natural products are said to be good for patients with gout and apple is one of them.

An apple a day keeps gout away!

What is better than witnessing an improvement in your gout symptoms but merely enjoying an apple daily!

I believe this becomes yet another motivation to include apple in your diet chart, as it can immensely help you cope against your gout symptoms!

Apple contains a high amount of vitamins and minerals and is a rich source of antioxidants.

These constituents make it an extremely healthy fruit that reduces the risk of various ailments like type 2 diabetes, cardiovascular disease, and thrombotic strokes, etc. Presence of antioxidants further makes it fit to prevent as well as treat symptoms of inflammatory disorders like gout.

It is thus a healthy and tasty option for patients with arthritis.

How do Apples help in Gout?

Gout, as we know, is caused due to the consumption of purine-rich diet.

So patients with gout are suggested to eat foods that are low in purine.

And apples are the best candidate! It is because, on an average, an apple has only 14 milligrams of purine compounds per 100 grams of fruit.

Thus this means that if apples are included in the diet, they will ascertain decreased production of uric acid owing to their low purine content.

Then again, apples are a good source of Vitamin C, Vitamin C has been known to lower uric acid levels in the blood which again benefit the patients with gout.

An apple contains 10.3 milligrams of vitamin C which is sufficient to fulfill a good part of our daily nutritional requirement.

Apple has been found to be a great remedy for gout in the form of Apple cider vinegar.

This form is full of nutrients like potassium and thus helps to clear toxins and excess water from the body.

Additionally, due to the presence of acetic acid in apple cider vinegar, it is much healthier for gout patients. It is because it helps to maintain the alkaline environment inside the body and maintains a healthy pH balance.

In fact, their further formation is also prevented thus aiding them from being circulated in the bloodstream. This eventually reduces inflammation and provides better flexibility to the joints. 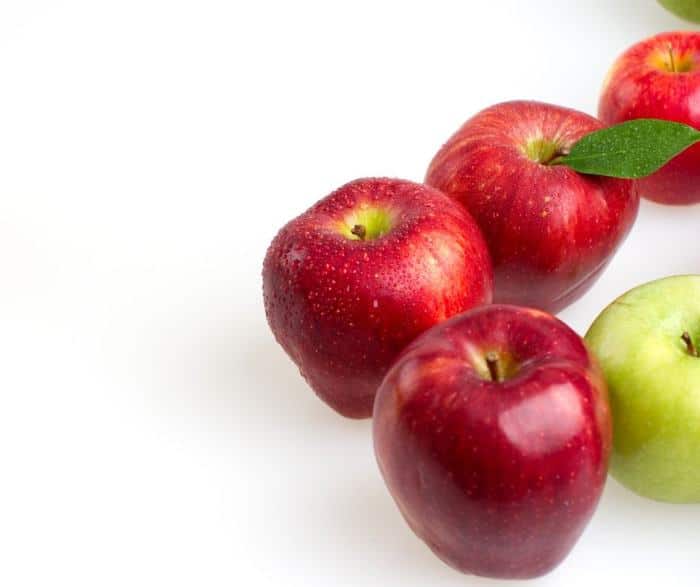 What has Science to say in support - apple for gout?

As such no direct studies have been conducted to show a clear relation between apple intake and gout.

But still, the therapeutic effects of the fruit cannot be denied.

In fact, many studies do confirm the anti-inflammatory nature of apple and thus justify their consumption by gout patients.

A 2009 study tested the effect of apple juice on risk factors for atherosclerosis. Atherosclerosis is a disease of the heart caused due to lipid deposition in the arteries and is characterized by an inflammatory response.

Thus this study tested the effect of apple juice on the inflammatory reactions.

The study clearly showed that consumption of apple juice results in a reduction in the levels of many pro-inflammatory mediators like C-reactive proteins, nitrate levels and level of total lipids.

Obesity or high cholesterol is one of the risk factor for gout as well. If apple consumption leads to a reduction in the overall level of lipids in the body then it certainly will affect the symptoms of gout.

Then again the factors controlling the inflammatory response in case of atherosclerosis are similar to those in case of gout.

Hence a similar response could be expected after apple consumption in patients suffering from gout.

This study thus clearly outlined the anti-oxidative and anti-inflammatory role of apple.

Another study tested the role of apple in attenuating the symptoms of Inflammatory Bowel response.

This study recognized Apple procyanidins as biological agents that exercise a significant role in combating against inflammatory diseases.

Testing the effects of such active compounds on gout patients would be interesting for the world of science.

In fact, the following study tested the effectiveness of the polyphenols present in apple fruit in lowering the inflammatory responses in chronic inflammatory bowel disease.

This study found that these polyphenols directly influence the expression of genes for various different pro-inflammatory mediators like NF-kappa B, IL-8, STAT-1 and IP-10.

Protein levels of some major cytokines and chemokines responsible for eliciting an immune response were lowered thus leading to the preventive and healing effect of the fruit.

Such results further strengthen the claim of apple being good for gout as similar inflammatory processes operate in case of gout.

Furthermore, a 2013 study conducted on colorectal cancer established that Apple possesses anti-inflammatory characteristics as it inhibits the activity of COX-2, another player in case of an inflammatory response in gout.

Prepare a strong case in favour of apple and apple products in treating symptoms of gout.

Though as per now no known scientific data to support this claim is available but still the studies done with other diseases are encouraging.

In the coming years, it is important for the scientific community to realise the significance of naturally occurring plants for fighting against disease conditions and thus focusing their attention towards research work aimed at revealing the therapeutic value of commonly grown fruits and vegetables.

How can we add an apple in our diet?

Apple can be included in your daily diet in a number of ways. Some of them are listed below:

The safe dosage of the fruit depends on a number of factors like age, health status and medical history of the patient

. The best-known dosage recommendation for gout patients is to have two to four servings of fruit daily.

These servings can be in any form but eating fresh fruit as a whole is much preferred.

When taken in the form of apple vinegar, 2-3 tablespoons are recommended to be consumed twice or thrice a day to show effect .

Apple is a commonly eaten fruit and no known side effects have been associated with it. Still, it is best to take precautions rather than being sorry later.

Keeping this view in mind, some of the precautions you must consider before using it as a natural remedy for gout are:

Apples are a common fruit all over the globe. It is much liked and preferred by most of the people on the planet.

Thus the knowledge that its daily consumption might reduce gout symptoms is an added advantage.

As such apples are extremely good for health and must be consumed by every individual due to the high levels of anti-oxidants, vitamins, and minerals.

Furthermore, they have also been credited with relieving the pain and inflammation in patients suffering from gout.

However such claims have not completely found scientific proof but still, there is no harm in supplementing your diet with the benefits of an apple!

1 thought on “Can Apples Help in Gout?”