Rheumatoid arthritis is among the most common type of arthritis which can affect both young and old people equally.

It is known as an autoimmune disease which causes inflammation in the joints of hand and feet.

It affects the lining of the joints which leads to swelling in these joints and subsequently deformation and erosion of the joints.

This disease usually occurs when the immune system of the body starts attacking its own cells and tissues.

This autoimmune affects not only the joints but also other parts of the body like the lungs, eyes, and blood vessels.

This condition can develop due to certain genes which can be genetically inherited.

It can occur due to infection or environmental factors that can initiate the conditions for rheumatoid arthritis.

What is Flaxseed oil?

The seed obtained from the Linum usitatissimum plant is called flaxseed and the oil extracted from this seed is known as the flaxseed oil. This oil is utilized in many forms in India and other countries.

It is most commonly used in the form of after-cooking oil and as an ingredient in margarine.

It has also been utilized in the manufacturing industry in products like soap, paints, varnishes, and waterproofing agents.

It has been used as soothing oil for skin for a long time by many people.

This oil has also been used in making a range of medicines as the oil is known to possess numerous medicinal properties.

It is used to treat constipation (used as a laxative), excess weight, skin irritation, breast cancer, and prostate cancer.

Flaxseed is not present naturally in any of the food items. However, it is added as a flavoring agent to food.

One thing to remember while using flaxseed oil is that it should never be used directly for cooking as it has a low smoking point. Thus, its best to use after food is cooked.

Flaxseed oil is also used in manufacturing as it is an ingredient in paints, varnishes, linoleum, and soap.

People have been using flaxseed oil as a potential treatment for various health conditions like atherosclerosis, diabetes, high blood pressure, and many types of arthritis including rheumatoid arthritis.

The oil obtained from the flaxseed is an abundant source of PUFA or polyunsaturated fatty acids which are considered good for health.

Some of these PUFA include alpha-linolenic acid which is known to decrease inflammation and swelling in rheumatoid arthritis.

The omega-3 fatty acids and omega-6 fatty acids come under the category of fats which are considered good for the heart and health.

The lignans part of the oil is known to possess antioxidant properties.

One reason why flaxseed oil is considered to be very beneficial is its versatility.  This makes it a healthier and more useful alternative to other oils.

Flaxseed oil contains nutritional characteristics that have the ability to act against chemical substances necessary for joint inflammation.

It is also considered to be safe in reducing pain and ailments.

Arthritis can be described as the inflammation of the joint tissues which causes stiffness and pain in the bones and joints.

Flaxseed oil can be useful in treating this swelling as it has anti-inflammatory properties.

Flaxseed oil is a beneficial anti-inflammatory compound because of 3 reasons. Firstly, it contains a high content of alpha-linolenic acid.

It is an essential omega-3 fatty acid for good health and is not produced by the body. This fatty acid helps in maintaining the structure and function of the joints.

The EPA further lead to the production of prostaglandins (PGE2- inflammatory mediators) and leukotrienes (LTB4- produced from white blood cells in response to inflammation).

The Prostaglandins H2 synthetase (enzyme) acts as a catalyst in a certain reaction involved in the inflammation pathway.

This PGH2 is further metabolized finally into prostaglandins.

Another pathway that plays an important role in triggering the inflammatory pathways in the synthesis of arachidonic acid.

The enzyme phospholipase A2 cleaves the arachidonic acid present in the phospholipids of the cell membrane.

An increased amount of arachidonic acid in the cell leads to the production of prostanoids like leukotrienes.

When the flaxseed oil is consumed the EPA and DHA are released from the phospholipids of the cell membrane.

Subsequently, these are converted into LTB5 and PGI3 which are anti-inflammatory eicosanoids.

Usually, these beneficial EPA and DHA are present in animal fats and can be expensive.

The flaxseed oil contains alpha-linoleic acid (alpha-LNA) which is a better and less expensive alternative.

This alpha-LNA is elongated into long-chains of DHA and EPA fatty acids which help in reducing the amount of arachidonic acid in the cells.

In addition to this, the alpha-LNA also competes with linoleic acid for the desaturase enzyme which most commonly leads to the production of arachidonic acid from linoleic acid.

All the latter steps decrease the inflammation by reducing the number of inflammatory metabolites released in the cells and tissues.

Moreover, the alpha-LNA has an action similar to that of steroids used for treating rheumatoid arthritis. It reduces the amount of pro-inflammatory leukotrienes and prostanoids in the cells.

The flaxseed oil acts on the inflammatory biochemical pathways and suppresses enzymes and proteins that are necessary for inflammation.

What does this mean? Flaxseed oil has anti-inflammatory properties because of which it can act against the biochemical pathways that produce pro-inflammatory effects. Hence it can reduce joint pain and stiffness in arthritis. 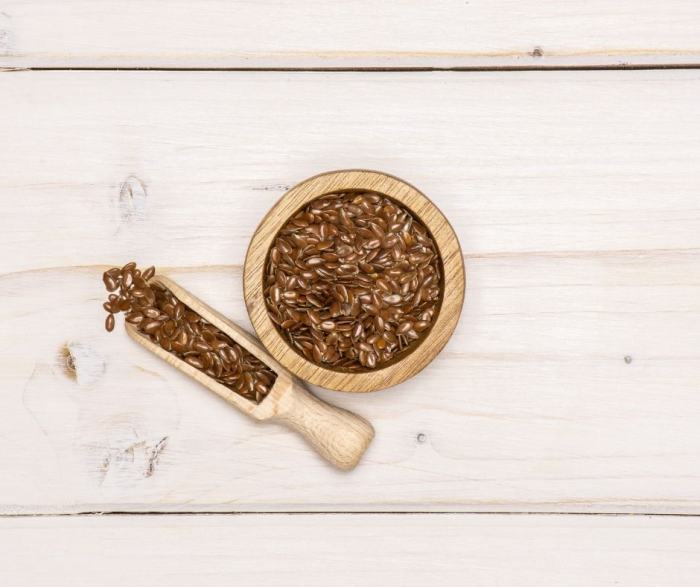 The cells in our body go through many complex reactions to generate energy.

This oxidative stress then causes damage in the DNA and results in cell death and inflammation.

Flaxseed oil has anti-oxidative properties because of the presence of lignans.

They help in reducing the oxidative stress levels which also leads to a reduction in cell death and inflammation.

Some of the painkillers used in arthritis lead to gastrointestinal side effects. A study was conducted which showed that flaxseed oil helps in reducing these harmful side effects.

What does this mean? This means that flaxseed oil has anti-oxidative and analgesic properties which make it useful in treating joint pain and stiffness.

A study was conducted in rat models in which the anti-inflammatory property of flaxseed oil in chronic and acute arthritis.

In the study, arthritis was induced in the rat models and the effect of flaxseed oil in decreasing the progression of arthritis was observed.

A significant reduction in the swelling and pain was observed at the end of the study.

Another study was conducted to study the anti-inflammatory action of flaxseed oil. At the end of the study period, it was observed that flaxseed oil led to a reduction in the expression of TNF-α and IL-6.

A reduction in the swelling and pain in the joints was also observed.

What does this mean? This means that the flaxseed oil has therapeutic beneficial in treating inflammatory disorders like arthritis. The anti-arthritic property of flaxseed oil is due to the presence of alpha-linolenic acid, an essential fatty acid.

How to include flaxseed oil in your diet

Flaxseed oil is easily available in the market at affordable prices. It can be used as after-cooking oil as it is considered very healthy.

It is known to reduce the amount of cholesterol in the body as it contains manganese and magnesium.

These components are known to regulate blood pressure and inflammatory response.

The flaxseed oil is also available in the form of a soft gel capsule which can be taken under the supervision of the doctor.

It is important to keep this oil in the refrigerator as it can turn rancid.

In addition to this, the oil is easily affected by exposure to oxygen, heat, and light, thus it is necessary to package with great care when transporting it.

it can be kept in dark-colored bottles to keep it away from the effect of light, heat, and oxygen.

Flaxseed oil supplements are also available in the market but one should consume it under doctor’s supervision.

It is part of the bread-like multigrain bread which are highly nutritious and healthy. It is also added to other components like dough’s, bread, cakes, etc.

Flaxseed oil is available in different forms like liquid and capsule forms.

It is necessary to keep it refrigerated and requires special packaging as it is easily destroyed by heat, light, and oxygen.

However University of Maryland Medicare Center recommends 1 to 2 tablespoons per day. If you are taking capsules, then the recommended dose is 1 to 2 capsules per day.

It is necessary to not increase the intake of flaxseed oil as it can interfere and inhibit the body from absorbing other medications and nutrients.

Most people use flaxseed oil in liquid form.

Although the flaxseed oil is highly beneficial for the body there are some precautions that should be taken while consuming it.

Flaxseed oil has the ability to interact and interfere with the absorption of other medications which makes it necessary to have guidance and supervision.

Flaxseed oil and other medicines should not be taken at the same time.

People taking these following medications should not use flaxseed oil without consulting your doctor:-

It is difficult for people with diabetes or schizophrenia to break down the alpha-linolenic acid present in flaxseed oil into 2 soluble compounds.

Hence people with diseases should prefer taking these fatty acids from natural food sources like fish.

The condition of rheumatoid arthritis has been posing a problem to people around the world for a long time as the drugs given for its treatment also have adverse side-effects.

These drugs can end up harming other parts of the body and have lasting side-effects.

In such conditions, it has become a must to rely on other natural sources for treating the condition in the most harmless way.

The flaxseed oil shows the anti-inflammatory and anti-oxidant properties which can treat the condition efficiently without hardly any side-effects.

The oil contains omega-3 fatty acids which are highly beneficial as they reduce the inflammation and act against the autoimmune response which occurs due to the condition of rheumatoid arthritis.