Rheumatoid arthritis is one of the forms of arthritis which comes under autoimmune diseases.

The body’s immune system starts to mistake its own cells and tissues as foreign bodies and produces antibodies against them.

This attack of the immune system usually leads to an inflammatory response by the targeted and affected tissues.

In the case of rheumatoid arthritis, the major tissues which are affected are that of the joints.

The inflammatory response causes redness, soreness, and stiffness around the joints.

There are many reasons for the occurrence of this condition; some of them are hereditary, external infection and hormonal changes.

What is Borage Oil?

Borago officinalis or borage is a type of herbal plant which can easily be found around the Middle East and Mediterranean region.

The seeds obtained from the flowers of this plant are used to obtain borage oil. Other parts of the plant like the flowers and the leaves may also be eaten.

Borage oil is a golden yellow oil derived from the seeds of Borago officinalis. Borage is a herb native to Syria but now grown in many other places.

It has characteristic blue, star-shaped flowers and leaves covered with white prickly hair.

Borage oil is said to aid in depression.

It is a rich source of essential fatty acid Gamma Linolenic acid. GLA comprises 17-25% of the oil. GLA works as an anti-inflammatory agent and helps in reducing pain and inflammation.

GLA comes under the category of polyunsaturated fatty acids (PUFA) which are considered for health and consumption.

This oil has been utilized as a treatment for several medical conditions like asthma, gum diseases, and rheumatoid arthritis.

GLA found in borage oil contributes to its anti-inflammatory effect which benefits in arthritis.

1. It reduces symptoms of rheumatoid arthritis

Reed et. al conducted a clinical trial where patients suffering from rheumatoid arthritis received either borage oil rich in GLA or fish oil rich in omega 3 fatty acids or both. The study lasted for 18 months.

There were significant reductions in disease symptoms in all the groups and these improvements lasted for 18 months. Patients were able to reduce their disease modifying anti-rheumatic drug therapy and use of anti-inflammatory drugs.

Clinically significant reduction in signs and symptoms of the disease was observed.

Tumor necrosis factor- alpha is a protein that contributes to inflammation. GLA in borage oil increases the level of prostaglandins ( type of hormones) which increase cAMP levels (biochemical messenger) and suppress the formation of tumor necrosis factor.

What does this mean? Borage oil demonstrates anti-arthritic effect and reduces inflammation in rheumatoid arthritis.

Leukotrienes also exert anti-inflammatory effect and inhibit the immune cells from migrating and attaching to the site of inflammation.

In an animal model of arthritis, a diet enriched with borage seed oil is found to reduce inflammation.

A study in humans demonstrated that oral consumption of GLA reduced the production of inflammatory chemical interleukin beta-1 in inflammatory arthritis and offered protection from sepsis.

Combination of omega 3 fatty acids and GLA supplementation in individuals suffering from rheumatoid arthritis helps in the production of anti-inflammatory eicosanoids.

Johnson et. al have reported that dietary supplementation of GLA has an anti-inflammatory effect.

What does this mean? Gamma Linolenic acid is an essential fatty acid present in borage seed oil exerts anti-inflammatory effect in the body and can help in reducing joint inflammation in rheumatoid arthritis. 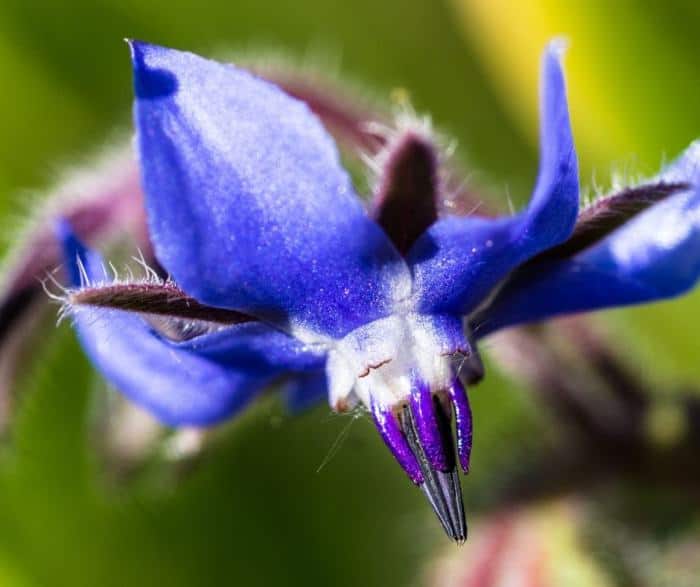 2.  It degrades fibrin deposited in the joints

Another study reported that on consuming the borage oil, there was an increase in the level of DGLA in the serum.

The prostaglandins are known to have a negative feedback effect on the inflammation in rheumatoid arthritis.

The study also reports that the GLA is known to have an inhibitory effect on the synthesis of leukotriene LTB4.

This leukotriene is formed from the high-level activity of the arachidonic acid (the type of polyunsaturated fatty acid) metabolism.

This metabolism triggers the leukocytes which play an important role in adherence, granulation, chemokinesis (undirected movement of molecules due to an external stimulus) and chemotaxis (movement in response to chemical stimulus) of the white blood cells.

The DGLA in the body is further converted into a derivative of 15-hydroxyl which suppresses the conversion of arachidonic acid into leukotrienes.

This study also reported another beneficial effect of the GLA and DGLA of the borage oil.

They reported that these fatty acids follow a fibrinolytic process which leads to an inhibitory effect on the deposition of fibrin.

It was observed that in the case of rheumatoid arthritis there is an excess of deposition of fibrin in the joints.

The study reported the effectiveness of GLA on patients suffering from rheumatoid arthritis.

These patients were given GLA supplements for 12 weeks and the level of fibrinolysis was observed.

It was noted that after treatment with the GLA supplements there was an increase in the degradation of the fibrin deposited in the joints.

This occurred due to an up regulation in the tissue-type plasminogen activator which enhances the process of fibrinolysis .

What does this mean? Rheumatoid arthritis is characterised by excessive deposition of fibrin in joints and GLA in borage oil breaks down the fibrin.

4. It benefits in autoimmune conditions

Dietary omega 3 and omega 6 fatty acids are said to play an important role in autoimmune diseases by modulating immune responses.

This could serve to be therapeutic in autoimmune diseases.

T lymphocytes are a type of immune cells that play an important role in tissue injury in rheumatoid arthritis.

Rossetti et. al conducted a study where individuals suffering from rheumatoid arthritis were supplemented with 2.4g of GLA in borage seed oil capsules. It was observed that GLA supplementation suppressed T lymphocyte proliferation.

GLA supplementation in healthy individuals is found to have a modest effect on immune function. GLA also benefits in arthritis-related complications such as systemic inflammation, eye inflammation, Sjogren’s syndrome, and diabetic nephropathy.

What does this mean? GLA present in borage oil has beneficial effects in autoimmune conditions like rheumatoid arthritis by preventing inappropriate immune system reactions and activation of immune cells. GLA also benefits in arthritis related complications.

How to take Borage oil in diet?

The leaves and other parts of the borage plant have been used by the people for medical treatments.

The oil of borage seeds can be used for several purposes in one’s kitchen.

The oil can be added to fruit and vegetable salads as a dressing.

The leaves and seeds of the borage plant are known to be an excellent source of gamma-linolenic acid. The fresh green leaves of this plant can be utilized in everyday cooking and added to vegetable curries and salads.

The Borage plant has a similar taste to that of a cucumber, thus it can be added to salads to enjoy its flavoring.

The leaves of borage plant can also be used to brew tea which can be very healthy.

In addition to this, it can also be added to lemonades and other healthy drinks.

The borage plant is also used to make borage vinegar. This vinegar can be used in place of a normal vinegar solution for healthier eating habits.

The seed of the borage plant can also be added to food items for flavoring according to taste and preference.

The oil of the borage seeds can be applied directly on the affected region like joints for instant relief.

This oil is added to various types of skin creams to soften the dry and scaly skin.

The capsules of borage oil are also available in the market.

Additionally, the oil can also be consumed directly for medical purposes.

How much borage oil to take for rheumatoid arthritis?

Borage oil can also be used as a flavouring agent in food. Opt for cold-pressed borage oil.

Borage oil can be used topically either alone or in combination with cream for the inflamed joints.

The borage oil has been considered safe for regular consumption as there are hardly any reports of people suffering from its side-effects.

However, there is certain precaution which should be kept in mind while taking this oil as a treatment.

This oil is not recommended for pregnant women and people suffering from seizures.

If taken in high amount (more than 300mg daily) the oil can trigger inflammation instead of inhibiting it. Moreover, the oil should not be combined with other drugs as it can interfere with their mode of action.

Thus, the oil should be taken under a doctor’s supervision .

The oil obtained from borage seeds is found to be a rich source of gamma-linolenic acid.

These fatty acids are known to release anti-inflammatory factors. These factors suppress the inflammation and swelling caused due to rheumatoid arthritis conditions.

The use of this oil has been reported to be effective for treating inflammation as it relieves the patients from pain and soreness in the joints.

This oil can be a healthy add-on to conventional drugs.