Gout is a type of joint inflammation resulting from uric acid crystal deposits in the joints.

Uric acid is formed due to purine degradation.

Purines are compounds present in the genetic material and other parts of the body.

Therefore, gout can surely be controlled by limiting purine consumption [1].

Chicken is one of the predominantly used foods which is well known to be rich in proteins. It provides the most essential vitamins and minerals to the body.

Some parts of the chicken are high in purine content and some are medium purine content. Let us now discuss if a chicken can be taken by gout patients.

Is Chicken Bad for Gout?

Gout patients need not restrict themselves from eating chicken. It can be taken in in moderate quantities.

It is better to avoid chicken during gout attacks as it may slightly add on to the increase in uric acid.

Chicken has moderate amounts of purine and it can be included in gout meal plans. Cooking and rinsing can further reduce the purine content in the chicken. 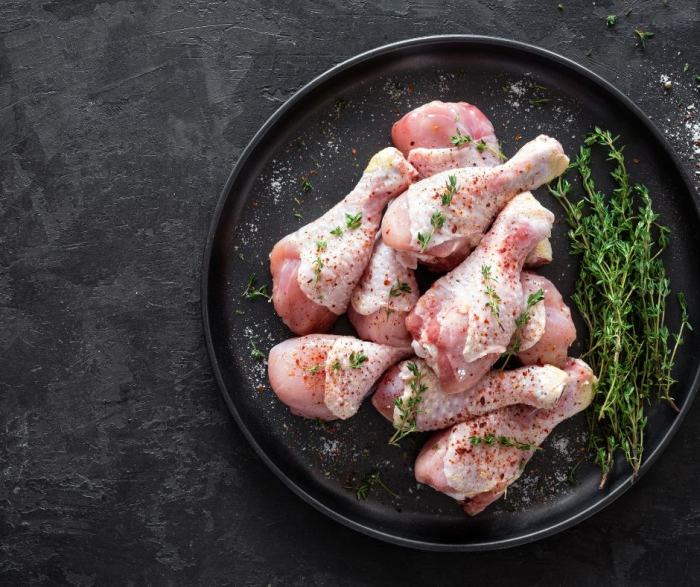 1. Perception of Chicken Intake and Gout

A study carried out by Harrold L.R et. al., studied the patients’ beliefs regarding the foods that cause gout.

It was reported that about 55% percent of the patients incorrectly believed that chicken was involved in increasing gout attacks compared to other high purine foods [2].

Not being aware of the foods that trigger gout can itself be a huge problem in gout patients. This lack of knowledge may be a reason for higher gout attacks.

What does this mean? Lack of information about foods to be taken in gout increases the chances of gout attacks. Correct information is key to gout management.

According to The American Dietic Association if a food contains 150-1000mg/100gm of purines then it is regarded as high purine foods and must be avoided by gout patients [3] .

A study by Ho et.al., classified foods as per their purine content as the following [4] :

Chicken can be classified as moderate purine-rich food.

However, some parts tend to have a higher level of purine than others for e.g. chicken liver.

What does this mean? Chicken contains moderate content of purines. Some parts have higher content than the others. It is best to choose lower purine content parts in gout patients.

3. What part of Chicken to Eat?

The daily diet of gout patients can include moderate amounts of chicken without any problem.

Chicken meat is identified to be the safest in case of gout patients when compared to turkey or goose  [7].

Food rich in protein is not bad for gout. A study demonstrated that food rich in purine increases the uric acid and total protein intake does not affect it [9].

What does this mean? Chicken leg and chicken breasts without skin contain the least purine content and it is the best choice in case of gout patients.

Research has proved that cooking methods could reduce some amount of purine content in chicken.

A study showed that rinsing chicken with water and cooking effectively reduces the purine content [10].

This also means that one must not use the chicken broth as it has higher purine content.

Cooking methods can involve sautéing or boiling. Frying is not advised as it may increase the fat intake. Drinking enough water is necessary before and after the meal as it leads to increased uric acid excretion.

What does this mean? Rinsing chicken and boiling it can effectively reduce the purine content in chicken.

How Much to Take?

Limit chicken to 6 ounces a day. It is best to divide it between 2-3 meals rather than taking all at once [11].

Drinking enough water can help your kidneys flush away more uric acid and keep them healthy [12].

Do not take more quantity of chicken than advised.

Limit the amount or else it might increase uric acid levels.

It is also best to avoid chicken in the diet if you are having an acute gout attack or have had a recent gout attack.

If you are suffering from kidney problems the protein intake must be limited therefore, consult your physician for advice on how much to take.

Gout is a type of arthritis which is caused by increased uric acid in the body.

Uric acid is a degradation product of purines, which are present in foods like red meat, shellfish, organ meats, chicken mackerel, etc.

Gout patients need not completely avoid chicken consumption. It can be taken in moderate quantities as it contains medium content of purines.

The purine content in chicken can be further reduced by selecting specific pieces and cooking them in a specified manner.

However, it is best to avoid chicken during a gout attack and after recent gout attacks.

The intake of chicken in gout patients is safe as far as it is taken in low amounts and in a controlled manner.