Smoking is recognized as one of the preventable cause of deaths. It is responsible for a great number of deaths worldwide [1].

The World Health Organization (WHO) estimates that more than 7 million deaths per year occur as the result of smoking [2].

Cigarette smoking is associated with many diseases like stroke, lung disease, cancer, heart disease, arthritis and many more.

Despite clear cut evidence on the problems of smoking, it remains a majorly prevalent type of addiction.

There are many different types of arthritis, but the two main types are Rheumatoid arthritis and Osteoarthritis [3].

Rheumatoid arthritis is a condition where the body’s immune cells mistakenly attack its own healthy cells. This leads to joint pain, swelling, stiffness, and inflammation [4].

Osteoarthritis is a condition of joint pain which is often caused as the result of aging or an injury [6].

It affects the knees, hips, hands or spine by breaking down the cartilage around the joints [7].

Several clinical studies conducted in humans have demonstrated that the risk of rheumatoid arthritis is higher among people who smoke [8].

Various mechanisms could be involved in this which are discussed in detail below.

6 Reasons Why Smoking Increases the Risk of Arthritis

Smoking increases the risk of arthritis by causing inflammation as the result of the activation of certain biochemicals.

Studies also show that smoking and its components cause damage to the immune system and generate antibodies that add on to the risk of arthritis.

Another important effect of smoking is the generation of free radicals which leads to oxidative stress in the body which is a key mechanism in arthritis. 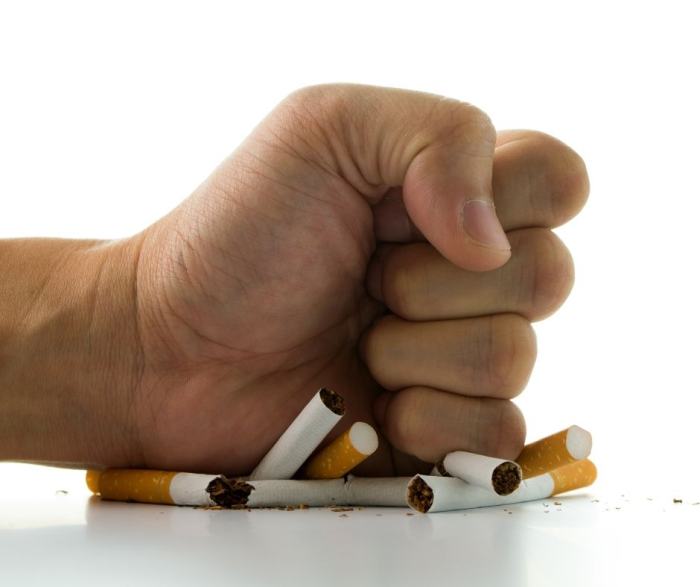 Smoking affects the immune system by causing lung damage and certain biochemical changes in the body which ultimately leads to inflammation [9].

As inflammation is one of the main problems in arthritis smoking could increase its risks.

Additionally, cigarette smoke leads to activation of inflammatory mediators (chemicals that bring about inflammation) which activates the immune system leading to inflammation [10].

Research also shows that smoking induces activation of the inflammatory mediators in the tissues lining the joints which activate inflammation [11].

A study which involved a large group of subjects measured the association of smoking with arthritis risks and it revealed that smoking and the exposure to the tobacco smoke greatly contributed to the risk of developing arthritis [12].

What does this mean? Cigarette smoke causes inflammation by increasing chemicals of inflammation and this can lead to increased risk of arthritis.

2. Smoking Causes Oxidative Stress Which can lead to Arthritis

A by-product of cellular metabolism or energy production is free radicals and reactive oxygen species (ROS) which cause damage to the cells.

This free radical build-up is known as oxidative stress.

Cigarette smoking has two components i.e., the tar component and vapor component. These two or proven to contain a high content of free radicals [13].

Clinical studies have shown that these free radicals are increased in smokers and it can further cause oxidative stress in arthritis [14].

In a study conducted by Kalpakcioglu B et.al., it was shown that oxidative stress greatly increases the inflammation in rheumatoid arthritis patients [15].

Another mechanism for the generation of free radicals can be the activation of inflammatory processes which promotes oxidative stress [16].

Furthermore, it is also proven that smoking reduces the level of antioxidants in the body which results in an imbalance in free radicals and antioxidant producing oxidative stress [17].

What does this mean? Smoking is known to increase the oxidative stress in the body which can one of the mechanisms of development of arthritis. This stress also causes inflammation.

The use of tobacco increases the formation of proteins called ‘Rheumatoid Factors’ which are responsible for the damage of the body’s own healthy cells which forms a key process in rheumatoid arthritis [18].

Nicotine enters the blood via the lungs and reaches different parts of the body including the lymphoid tissue (which produces immune cells) where it causes damage by immune suppression [19].

Long term smoking leads to a permanent change in the immune system which may later develop antibodies that contribute to arthritis [20].

A study found that the organic compounds in cigarette smoke are significant in reducing many types of biochemicals required by the immune system [21].

This can cause the reduced response of the immune system and the development of arthritis.

What does this mean? Smoking increases the production of rheumatoid factors and reduces the function of body’s immune system.

4. Genetic Factors along with Smoking Increases the Risk of Arthritis

A combination of genetic factors, as well as environmental factors, can contribute to a higher risk of development of rheumatoid arthritis [23].

It has been revealed in a clinical study that individuals with certain genetic factors along with smoking habits have an increased risk of developing arthritis [24].

In another study, conducted by Wagner CA et.al., showed that the combination a genetic trait and smoking lead to increased formation of autoantibodies (responsible for immune reactions and damage to healthy cells) [25].

What does this mean? Certain genetic traits along with smoking forms a great risk factor for the development of arthritis. Therefore, in genetically susceptible individuals there is a greater risk.

A process called ‘Citrullination’ takes place in the body where the amino acid called arginine is converted to citrulline.

Citrulline is an amino acid that is not one among the essential amino acids in the body.

This citrullination leads to the development of antibodies (proteins produced as the result of any external substance in the body) by the immune system.

Anti-CCP is an antibody that is present in arthritis patients. It is responsible for the body’s immune cells attacking its healthy cells, inflammation and deranged immune system function.

In a clinical trial which included arthritis patients revealed that there was an increase in Anti-CCP in the smokers when compared with non-smokers [27].

These antibodies are considered as foreign by the body’s immune system and it fights against it to cause arthritis.

Fibrinogen is a protein involved in blood coagulation and inflammation. It is found to be low in smokers. The citrullinated form of fibrinogen can further contribute to the activation of autoantibodies [28].

What does this mean? Smoking causes the production of antibodies which damage the healthy cells and contribute to inflammation and immune system dysfunction.

6. Smoking Increases the Cell Death in the Body

Nicotine and tobacco are found to causes the death of lymphocytes (White Blood Cells – immune cells) by activation of the receptors which causes cell death.

Smoking also increases the number of lymphocytes which are toxic to the cells [29].

Cell death is brought about by the damage caused to the energy-producing component of the cells. This damage ultimately causes cell death [30].

In smokers the free radicals generated within the cells is high and this also further contributes to the cell death [31].

What does this mean? Tobacco increases the damage to the energy-producing component of cells and causes cell death in the body which is a key mechanism in arthritis.

The detrimental effects of smoking and tobacco use proven by various studies and widely accepted. There is a comprehensive array of studies proving the increased risk of arthritis in smokers.

The contents of the cigarette smoke can lead to increased free radicals which in turn brings about cell death and immune cell damage which can be crucial in the development of arthritis.

Smoking coupled with certain genetic traits has been known to cause a greater risk in the development of arthritis.

This factor is of great importance in genetically susceptible individuals.

The association of tobacco use and increased arthritis risks has strong evidence from trials however, some more mechanisms are yet to be understood.

Smoking cessation is proven to be a great path to prevention of arthritis.