Out of all the cosmetic procedures available in the market today, the laser hair removal treatment has witnessed an exponential growth in popularity.

From the variety of problems that a consumer can have, the most common happens to be unwanted hair growth.

As people become more conscious about their looks and external appearances, especially women, they sought more permanent solutions to their problems.

Waxing, shaving, threading are all temporary solutions whereas, laser treatment is comparatively long-lasting.

This method of hair removal is comparatively newer and a lot of pioneering research has been done by leading dermatologists all over the world to further improve and explore this dimension.

The following sections of the article elaborate what this treatment is and all the other necessary information required by the customers.

What is Laser Hair Removal?

Laser hair removal is categorized as a cosmetic procedure for the removal of unwanted hair by the use of lasers.

LASER stands for Light Amplification by Stimulated Emission of Radiation and this basically, means that the light is amplified (made stronger) and focused on the target area to damage the hair follicles.

This prevents the future growth of hair in some cases or lessens the speed of growth or the growth cycle which is somewhat semi-permanent in its nature.

The procedure can be done with the aid of different kinds of lasers and each of them has a special category of hair and skin type on which they work most effectively.

Consultation with the dermatologist will give a clearer idea about the same.

The procedure is mostly completed in a few sessions and there is a prescribed gap between these sessions.

One may also witness side effects and they are informed of this prior to the procedure.

One is also informed of the pre-operative steps that can be undertaken to minimize the damage.

All in all, this happens to be a very precise procedure that requires a lot of care and precautionary measures but almost always results in promising outcomes.

What is Diode Laser Hair Removal?

The laser used throws light at the target region at 800nm which is longer in terms of wavelength as compared to alexandrite or ruby lasers.

Although the longer wavelengths are not absorbed properly by melanin (the pigment which gives the skin its color), it does penetrate deeper into the epithelial cells (skin cells) owing to the tried and tested a theory that “the longer the wavelength, the deeper the penetration”.

When this happens, there are more chances of severe damage to the follicular growth centers which is helpful to our cause.

The diode laser hair removal uses different kinds of the laser as compared to the other laser removal techniques and this is elaborated in the next section.

Therefore, the diode laser treatment is a pioneering and evolving research area, being one of the newest in the field.

According to the studies that have already been conducted it has been reasoned that there are two main mechanisms that will ensure the removal of hair. These are:

Degradation of coarse hairs to vellus like hair: Vellus hair refers to the thin hair that is usually present all over the body from birth.

In this case, it refers to the phenomenon where the coarse hair structures are converted into thinner ones by the thermal effect of the laser.

Complete destruction of follicles: This refers to destroying the remnants of the follicles completely with further treatment to ensure total eradication of any hair growth pigments.

The diode laser treatment focuses on these two mechanisms to get the hair removal done. There are certain pre-operative steps that need to be taken care of.

First is shaving the target area. This is done to:

Second, dark-skinned individuals are required to apply sunscreens before the treatment to reduce the post-treatment damage to the skin because the cases of these happening increases as the skin tone turns darker.

The semiconductor lasers used in the clinical applications tend to be more effective and efficient as compared to the other laser machines which are used for Alexandrite, Nd:YAG etc. because it is smaller.

The other laser treatments use the flashlamp devices which are bulkier as compared to the diode lasers.

Therefore, this laser technology stands for a major change in the hair removal methods.

Clinical Research and Further Specifications of the Diode Laser Treatment

There have been a lot of studies related to the diode laser hair removal as can be seen by the sheer amount of data collected and the analysis done.

This has been summarized briefly in the following points.

They had evaluated 95 subjects in their studies of different hair colors and skin types. They were mostly Fitzpatrick’s skin types II to VI.

The Fitzpatrick scale mostly is basically a numbering system where each skin tone is classified under different numbers.

One can read more about it here. Also, the majority of the subjects had brown or black hair.

The research done by this dermatologist showed that the clearance rate was almost as high as 60% (no hair regrowth for 6 months) after 2-3 sessions.

Also, the fair skinned and dark haired people happen to be the best candidates for this type of treatment.

Although, people with skin type V (refer to Fitzpatrick scale) can also be treated safely at lower fluences, longer pulse duration (30 msec) and adjusting the other parameters accordingly.

The study was done by this group in 2000 also encountered the promising statistics as had been witnessed by Grossman et al.

There was a 22-31% decrease in hair growth after the first treatment and finally stabilized at 65-75% between 3-20 months.

This group worked with 36 patients with skin types I-IV and with black and brown hair.

These patients received the treatment at different fluences and it was noted that when the fluence was changed to match the requirements of the patients, it yielded much more effective results as compared to shaving.

Only 59% participants showed sparse regrowth at the 4 months follow up. It was noted that higher fluences yielded better results.

There has been a lot of other research with variations in the laser used, the spot size of the laser (the area which is targeted in one go), the fluences, the wavelength, the different skin types operated on, the quality and quantity of hair, the comparative study between diode, alexandrite and other kinds of laser currently used for the treatments, treatment intervals variations, pulse intervals etc.

These results have been tried and tested and been used to further improve the effectiveness of the treatment.

The following sections enlist all the comparative studies conducted with regards to Alexandrite, Diode, and Nd:YAG lasers.

It has been noted that the more the number of treatments, the more is the reduction in hair growth.

A common observation noted by several dermatologists was also that the hair which grew back after the treatment was finer and lighter in color.

Also, there were experiments which tested the effectiveness of different fluences (i.e. the amount of energy to be delivered by the laser) and it was noted that when more energy is used, it causes more follicular damage although, this also means that the patient will undergo more discomfort.

The following are some research studies that compare the different treatment options available.

At the six months follow up, there was a 54%-63% reduction which is comparable.

Although, the patients said that the pain level associated with the diode treatment was higher.

Studies by Chan et al. : The study was conducted on 15 Chinese patients with skin type IV-V and it was done only for one treatment session.

It was noted that the pain level associated with Nd:YAG laser was higher as compared to the diode and the hair regrowth was noted to be similar after 9 months.

Twelve months after the last of the 3–6 treatment sessions, the efficacy in hair removal was comparable (35–40%).

Studies by Rao et al.:  The study was conducted on 20 women of skin type II and it included 3 treatments by alexandrite, diode, and Nd:YAG lasers on a rotational basis.

17 women had dark colored hair and 3 of the red or light colored hair. The treatment was conducted at intervals of 6-8 weeks interval.

There was no significant difference between the results of the three treatments although it was concluded that the effectiveness was less for red and light hair colors.

Studies by Toosi et al. : The treatment was performed on 232 women and the comparison was made between diode and alexandrite lasers and the IPL treatment related to the efficacy and the side effect profile.

There was no significant difference although, the diode treatment was more effective as compared to the other two.

The side effects associated with diode were also more and increased with increasing Fitzpatrick scale.

Also, the number of treatments is positively associated with the amount of hair reduced.

The diode treatment was more effective in reducing hair growth as compared to alexandrite and the IPL technique but it was also associated with increased pain levels and side effects.

The skin phenotypes IV-VI reacted almost in a similar way to diode, alexandrite, and Nd:YAG treatments.

Although diode treatment may be painful, the discomfort can be alleviated by the use of a contact cooling lens.

Benefits of the Diode Laser Treatment

The following points demonstrate the benefits this mode of laser treatment has as compared to the other viable options.

Drawbacks and Limitations of the Diode Laser Treatment

The following points illustrate the drawbacks of the treatment.

Which area of body diode laser removal can be used and how many sessions are required?

The treatment can be used to target chest hair, lower abdomen (supra-pubic hair), hair on the back of the neck, male back and chest hair, chin, upper lip, sideburns, cheek hair, bikini region and axillae hair (underarms).

The sessions vary from 3-6 depending upon the region to target and the coarseness and density of hair to be removed. This also varies from person to person.

The intervals between the sessions should be 4-6 weeks if it is facial hair and 8-10 weeks if it any other part of the body.

This is because facial hair grows faster as compared to body hair.

Also, it is important to target the hair in the right growth phase of its complete cycle.

Who can go for this treatment?

As the laser targets the melanin content, the ideal candidate for this treatment should have light skin and dark hair.

The red colored hairs and blonde, as well as white hair, do not react promisingly to the treatment and this may be so because of their low levels of pigment. 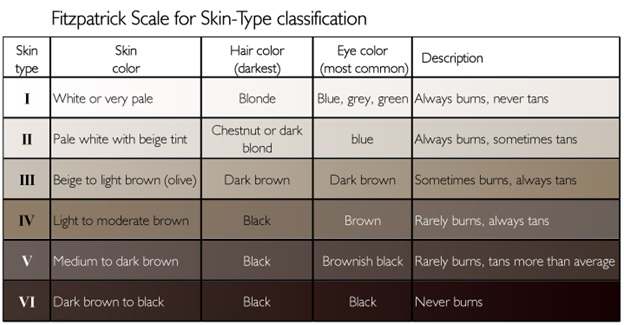 The image above shows that people whose skin color is in the range IV-VI are not advised to go for this treatment because it seldom works and gives the expected outcomes for them.

It has been concluded from the analysis of various researches that the treatment was best suited for Fitzpatrick skin types I-IV.

This laser should always be used with a contact cooling device.

The darker skin types are treated with longer pulse durations varying from 30 to 100 msec to reduce post-operative inflammation.

All in all, diodes are more user-friendly, portable and easy to use.

It is advisable to seek a dermatologist’s opinion before going for this treatment as is the case for all such procedures.