Arthritis is term, which is used to refer to any disorder that affects the joints. Nearly 100 different types of arthritis are known to exist.

There has been increasing awareness and research regarding the application of non-conventional treatment regimes like diet changes and other complementary medicines like herbal therapy because the use of most of the existing conventional medications carries side effects in the long run.

What is Emu Oil?

The yellowish liquid is collected from the bird and then undergoes several rounds of processing until a pure oil is obtained.

Australians used it widely in folk medicine. Native Australians rubbed this oil obtained from the bird on their body to alleviate pain and allow wound healing.

The clear oil is known to have many naturally occurring chemicals that can help with several ailments.

It possesses natural antioxidants like flavones, carotenoids, along with several other beneficial fatty acids like linolenic acid and several omega fatty acids.

It is taken orally as well as applied topically to alleviate pain and aches.

Benefits of Emu Oil in Arthritis 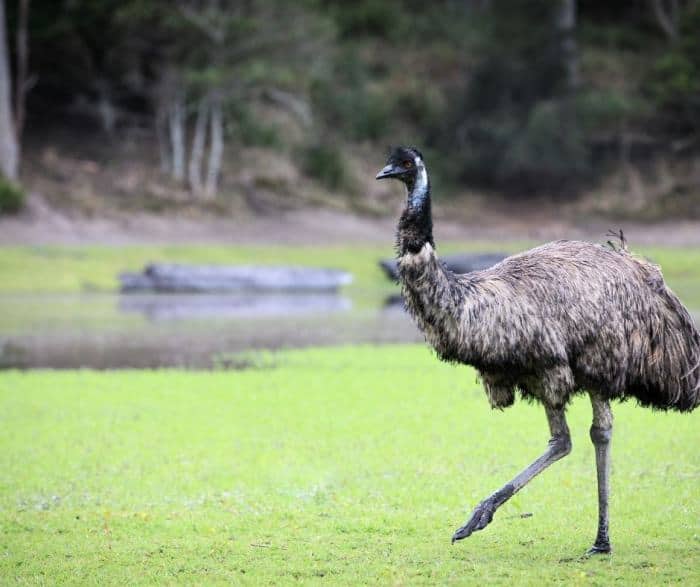 1. Emu oil is anti-inflammatory in nature

Several studies have described and proven the anti-inflammatory activity of emu oil.

It was used by native Australians for alleviating pain and ache associated with arthritis due to its anti-inflammatory properties.

Its topical application also exhibits anti-inflammatory properties. Emu oil has also been shown to reduce inflammation of the intestinal wall in the animal models.

Treatment of arthritic rats with emu oil led to a decrease in the severity of arthritis. There was a reduction in swelling and arthritis score.

Low triglyceride fraction of emu oil showed the maximum anti-inflammatory activity. Topical application posed no side effects like skin irritation, which is sometimes observable in case of topical NSAIDs .

Application of emu oil can stimulate the area and allow better blood flow, which in turn can help alleviate inflammation.

The polyunsaturated fatty acids present in emu oil can alter pathways that lead to the production of pro-inflammatory cytokines and reduce their levels in the body.

What does this mean? Emu oil has been shown to exhibit anti-inflammatory properties. This can be helpful for the patients of arthritis as a reduction of inflammation results in alleviation of several symptoms of arthritis like pain, swelling, etc.

Emu oil is capable of showing anti-oxidant activity. A study showed that emu oil could effectively scavenge free radicals and protect the body against oxidative stress.

This can be attributed to the different beneficial unsaturated fatty acids present in emu oil.

Since oxidative damage can enhance inflammation, degradation of cartilage, etc. it is important to protect the body against oxidative stress.

What does this mean? Oxidative stress can cause the progression of arthritis by enhancing inflammation and causing damage to the connective tissue. Emu oil has been shown to exhibit anti-oxidant property, which can prevent oxidative damage and thus extend protection to the patients with arthritis.

Arthritis patients are at a greater risk of developing cardiovascular ailments like atherosclerosis.

Atherosclerosis in finding to be more prevalent in the patients of rheumatoid arthritis and psoriatic arthritis due to the inflammatory damage to the body.

This not only affects the overall quality of life but also the life expectancy.

Prevention of atherosclerosis is, therefore, an important factor in ensuring that there is no collateral damage associated with arthritic conditions.

Emu oil has been shown to reduce the formation of atherogenic plaques in the obese mice models.

The oil was effective in inhibiting atherogenic changes in the blood vessels and this confirms the anti-atherosclerotic property of emu oil.

This can be attributed to the beneficial fatty acids present in emu oil. Oleic acid, linolenic acid, etc. have been found to be instrumental in alerting biosynthetic pathways and preventing plaque formation.

Emu oil also reduces the cholesterol concentration in the aorta.

What does this mean? Patients of arthritis are at a greater risk of developing atherosclerosis due to inflammation. Emu oil has been shown to provide protection against formation of atherosclerotic plaques and thus possesses anti-atherogenic property.

These drugs are known to carry side effects if used for extended periods of time. One such side effect commonly observed is the damage to the walls of the intestine called NSAID-gastroenteropathy.

Long-term use of these non-steroidal anti-inflammatory drugs by the patients thus poses a risk to their intestinal health characterized by inflammation, bowel perforation, and ulceration.

Emu oil has been shown to decrease the acute intestinal inflammation caused by the use of these drugs.

In a study conducted on rat models, it was shown that administration of emu oil could effectively reduce indomethacin-induced enteropathy.

This can be attributed to the reduced levels of cytokines like tumor necrosis factor alpha and interleukins because of the polyunsaturated fatty acids of the emu oil.

What does this mean? Frequent and regular use of Non-steroidal anti-inflammatory drugs (NSAIDs) is associated with side effects like enteropathy. Emu oil has been shown to reduce this gastroenteropathy caused by such drugs. Therefore it can be helpful in keeping the side effects of these drugs at bay in the patients with arthritis.

The scientific information on dosage is not available.

The dosage will depend on the condition of the patients, age and several other factors.

These factors should be evaluated by the healthcare practitioner and the appropriate dosage and mode of delivery (oral/topical) should be worked out.

Emu oil capsules and tablets are widely available which can be taken orally. It can also be applied topically because of its great penetrance power. It can be mixed with other carrier oils and applied as a massage blend.

A topical application requires a full teaspoon mixed with a carrier oil. Nearly 1-2 capsules can be consumed per day. This should be crosschecked with the health care provider to avoid side effects and drug interactions.

The direct topical application might cause skin redness, irritation in some people.

A patch test should be done before applying it generously. Use should be immediately stopped in case of an allergic response.

It is very important to ensure that the patients use pure emu oil of high grade. The level of useful chemicals varies drastically with the quality of the oil.

It should only be bought from reputable, ethical sources and high non-adulterated quality should be ensured. Poor quality can cause more harm than good due to added artificial chemicals.

Pregnant and breastfeeding women should consult health care provider before ingesting/applying emu oil. There might be interaction with blood thinning medications that are used by the patients of arthritis.

Emu oil has been widely used by native Australians for alleviating several ailments. It has been proven to possess many beneficial properties due to its rich store of naturally occurring chemicals.

It can be bought from reputed sources and used regularly without any side effects.

Finding the right kind of oil and its appropriate use is essential and consultation with health care provider is useful in this case.