Aromatherapy is one of the most commonly used complementary therapies.

Increasing information on the benefits of essential oils in various health-related problems has enabled people to use natural remedies like these in the management of their health issues.

Arthritis is a condition affecting millions of people and there is no cure for the disease yet.

Which makes patients rely on the medication and other complementary therapies.

These main symptoms are seen in all the patients but, in some patients, these symptoms can cause stress, anxiety and even depression.

Aromatherapy usage in arthritis can do a great deal of good to the patients by reducing their symptoms and improving their quality of life.

Before we move on to the benefits of chamomile oil in arthritis let us discuss some basic information about this oil.

What is Chamomile Essential Oil?

Chamomile is an aromatic herb that produces white flowers and is mainly grown in Europe, Germany, Russia, and Rome.

Chamomile usage can be dated back to ancient times in Greece and Rome.

While people in ancient Egypt regarded chamomile as sacred, people from Europe and Germany rendered this herb to be capable of anything.

Chamomile oil is an essential oil that is collected through a process of distillation from the herb. It mainly contains ‘sesquiterpenes’, which is a class of chemical compound that imparts the health benefits to this oil.

Researchers confirm that chamomile possesses anti-inflammatory, antiseptic, and analgesic properties that make it useful in a wide variety of health conditions.

It is also proven to be effective in stomach diseases and anxiety. Chamomile oil is also used in the cosmetic industry, perfumery, and beverages.

Benefits of Chamomile essential oil in arthritis are due to its anti-inflammatory, analgesic, antioxidant and anti-anxiety effects. Scientific research proves the property of chamomile in reducing joint pain and inflammation in arthritis. It can make you stress and anxiety free as well as promote detoxification of the body. Chamomile oil has some evidence suggesting weight reducing effects which could benefit in arthritis. 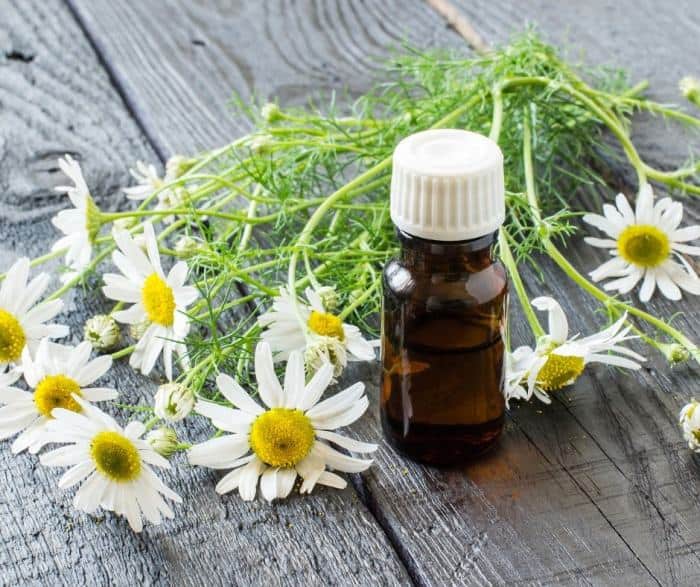 Agonizing pain is the main symptom of arthritis that leads to distress among patients. Chamomile oil is a centuries old remedy for abating rheumatic pain and arthritis.

It was also capable of reducing the oral pain-killer tablet requirement among patients.

A study published in the ‘Journal of Dietary Supplements’ demonstrated that chamomile was responsible for reducing joint pain and improved the movements of the joints of the knee and lower back.

A chemical constituent called ‘phellandrene’ which is present in chamomile is found to be responsible for this analgesic activity that inhibits the pain signals from reaching the brain.

Chamomile oil can reduce pain and do wonders in relieving joint pain bringing about improved physical activity and quality of life in arthritis patients.

What does this mean? Chamomile oil has properties of analgesia that can help in ameliorating pain in the joints of arthritis patients. It can further benefit arthritis by reducing the intake of pain-killer medications.

Arthritis literally means ‘inflammation’, which is a technique opted by the body’s immune system to ward off external as well as internal damage to the tissues.

Chamomile’s property of anti-inflammation has a centuries-old tale to tell in reliving numerous inflammatory diseases of the body.

Chamomile oil exerts its effect of anti-inflammation by reducing the chemicals that are responsible for bringing about inflammation in the body.

Upon identifying the anti-inflammatory properties of chamomile in animal studies, researchers then moved on with human trials to validate this property.

What does this mean? Chamomile oil is suggested to be anti-inflammatory in nature that could reduce inflammation in arthritis.

3. Antioxidant Capacity of Chamomile Oil can Promote Detoxification of the Body

An antioxidant is a must for anyone to remove the internal (which are generated within the body during biochemical processes) and external toxins from the body.

In the absence of antioxidants in the body, it can lead to oxidative stress.

Chamomile oil is a potent antioxidant agent that fights and removes toxins from within the body.

‘Bisabolol’ and ‘Chamazulene’ are two chemical constituents that are present in chamomile which imparts antioxidant benefits to chamomile.

Research also identifies that chamazulene has better antioxidant activity than that of vitamin E and C. Studies in animals have proven the potent antioxidant capacity of chamomile oil.

What does this mean? Chamomile oil can help in detoxification of the body which is imperative in arthritis patients as there exists a deficiency of antioxidants in them.

4. Chamomile Oil is an Excellent Remedy for Stress and Anxiety Relief in Arthritis

Arthritis symptoms can lead to stress and anxiety which may lead to depression. Arthritis patients are at a higher risk of developing these problems which require careful management and therapy.

Chamomile releases anxiety, stress, and aids in sleep induction. Sighting these properties, it was used as folk medicine by our ancestors.

Researchers have identified that chamomile contains a flavonoid that is great for reducing stress and anxiety in people.

According to the Journal of Clinical Psychopharmacology, chamomile extract reduces the symptoms of anxiety in 57 participants.

A clinical trial conducted by Amsterdam JD et. al. demonstrated that chamomile was effective in reducing the symptoms of anxiety and good anti-depressant activity.

An analysis of the research studies on chamomile extract emphasizes its capacity on the reduction of anxiety, stress, and depression. This effect can be highly beneficial in reducing stress and anxiety in arthritis patients.

What does this mean? Chamomile oil can help in reducing depression and anxiety symptoms in arthritis patients who are at a higher risk of developing these problems.

Overweight and obesity are the main risk factors in the development of arthritis. Moreover, it is involved in worsening the symptoms of arthritis too.

Weight loss is a crucial step in the management of arthritis.

Studies in animals have demonstrated the property of chamomile in reducing body weight and preventing the accumulation of fat tissue.

Chamomile has been proven to reduce the weight gain in obese animals by acting on the receptors that are responsible for weight gain.

Chamomile oil which is regarded with the properties of weight loss can be beneficial in arthritis therapy. However, studies in patients are still pending in providing solid evidence to prove this effect.

What does this mean? Obesity is a common problem in arthritis. Chamomile could reduce weight gain in arthritis patients. However further research is required to strongly prove this benefit in arthritis.

How to Use Chamomile Essential Oil

Chamomile can be used both internally as well as externally on the body. Chamomile essential oil is generally regarded as safe by the FDA, which means that it is safe to be taken internally.

Orally it can be taken in the form of teas and capsules. For preparing teas to add 2-3 drops chamomile oil in 150ml of hot water.

Capsules of 370mg can be taken orally for weight loss three times daily.

Chamomile oil can be applied topically to the painful joints to reduce pain and joint stiffness. To apply externally take a few drops of diluted chamomile oil and gently massage on your joints three times a day.

Make sure to dilute the oil before use. Use jojoba oil, almond oil or coconut oil (carrier oil) for dilution. Add one drop of chamomile oil to one teaspoon of carrier oil.

Chamomile oil can also be placed on a diffuser and the vapors can be inhaled which can help in reducing anxiety and stress.

Chamomile oil is generally safe to be used. However, one must perform a skin test before using this oil topically.

To perform a skin test, take a few drops of diluted oil and apply to your forearm skin. If no reaction occurs after 48 hours, then the oil is safe to be used topically.

If you are allergic to ragweed you might also be allergic to chamomile. Therefore, you must avoid using this oil, both orally and externally, without your physician’s advice.

Do not use chamomile oil if you are pregnant or lactating as it could cause fetal harm.

If you have concomitant diseases or medications then seek advice from a registered medical practitioner before taking chamomile oil internally.

Chamomile herb has been used for centuries in managing various health-related issues. Research on the chamomile herb identified its numerous benefits on health.

Chamomile oil has great benefits in arthritis patients. It can reduce joint pain and inflammation in arthritis.

It is also proven to reduce oxidative stress and promote detoxification in arthritis patients.

Anxiety is a common problem in arthritis patients which can be reduced by using chamomile oil as it possesses strong anxiety and stress-relieving properties.

Chamomile has been suggested to contain anti-obesity properties which may benefit arthritis patients to reduce weight.

However, this effect is yet to be proven via human trials.

Chamomile oil is an amazing natural therapy for arthritis patients as it is proven to be effective and safe in relieving the symptoms of arthritis.