The term arthritis is associated with any disorder that affects the joints.

It is used to describe inflammation and pain in the joints and the tissues surrounding the joints.

Various research studies have suggested the supplementation of Vitamin E in the diet for the treatment of arthritis as well as other health benefits which have been described further in this article.

What is the role of Vitamin E in health?

Vitamin E is characteristic of its anti-oxidant properties which protects the cells from the damaging oxidative effects of free radicals i.e. reactive oxygen species.

This is a very important property of Vitamin E as free radicals increase risk of developing cardiovascular diseases and cancer.

Apart from its anti-oxidant activity, it has anti-inflammatory property, role in platelet aggregation and enhancement of the immune system.

Following are some health benefits of Vitamin E in diseases like it:

A clinical study conducted on 78 patients investigated the anti-inflammatory and immune function of Vitamin E in humans with active rheumatoid arthritis.

The study suggested that co-supplementation of linoleic acids with Vitamin E may be effective in reducing inflammation in arthritis patients.

In another clinical study conducted on patients with rheumatoid arthritis revealed that Vitamin E supplementation was capable of exerting an anti-inflammatory and analgesic effect hence reducing pain, inflammation and oxidative stress of proteins and lipids in the affected joints.

Animal studies investigated the anti-inflammatory effect of Vitamin E on rats induced with arthritis and found that Vitamin E reduces inflammation in the affected joints of rats demonstrating that Vitamin E treatment has the ability to modify the disease and alleviate its symptoms.

What does this mean? Vitamin E has shown tremendous scope in reducing inflammation in the joints of arthritis patients due to its efficient anti-inflammatory properties. It has the ability to alleviate symptoms of arthritis when incorporated in the diet in appropriate amounts.

Osteoarthritis is one of the most commonly occurring forms of arthritis and the cause of chronic pain and disability in the elderly.

Supplementation of Anti-oxidants is very essential for patients suffering from arthritis.

Vitamin E is one such powerful anti-oxidant.

In an experimental study conducted by Bhattacharya et al. it was observed that antioxidant activity of Vitamin E supplements has a protective effect against oxidative stress caused in osteoarthritis leading to pain and inflammation in the joints.

It inhibits lipid peroxidation and exhibits anti-inflammatory analgesic activity. Vitamin E has an effective therapeutic effect for treating the symptoms of osteoarthritis mediated by oxidative stress.

In another study conducted on 75 clinically diagnosed osteoarthritis patients that antioxidant of Vitamin E was investigated.

The results showed an improvement in the anti-oxidant status as well as bone health on prolonged Vitamin E supplementation.

A study determined that 400mg of oral palm Vitamin E supplementation reduces symptoms of osteoarthritis in the knee.

No side effects were observed. This is due to its potent anti-oxidant effect.

What does this mean? Vitamin E is a powerful anti-oxidant. Its antioxidant properties reduce peroxidation of lipids and oxidative stress that are a common cause of pain and inflammation in the affected joints. Vitamin E supplementation can prove to be beneficial in boosting the antioxidant defence of the body.

3. It prevents the progression of arthritis

Cytokine-mediated pathways play a central role in the pathogenesis of rheumatoid arthritis.

This is because rheumatoid arthritis is an auto-immune disease and cytokines mediate an important role in regulating the adaptive and innate responses of the immune system.

It is important to regulate levels of cytokine for normal functioning of the immune system.

This can prevent the occurrence or progression of rheumatoid arthritis.

An experimental study evaluated the effects and mechanisms of Vitamin E on serum levels of cytokines.

The conclusion made was that Vitamin E reduced levels of cytokines in the serum suggesting that its supplementation in the diet can be used as a novel method in the treatment of rheumatoid arthritis. 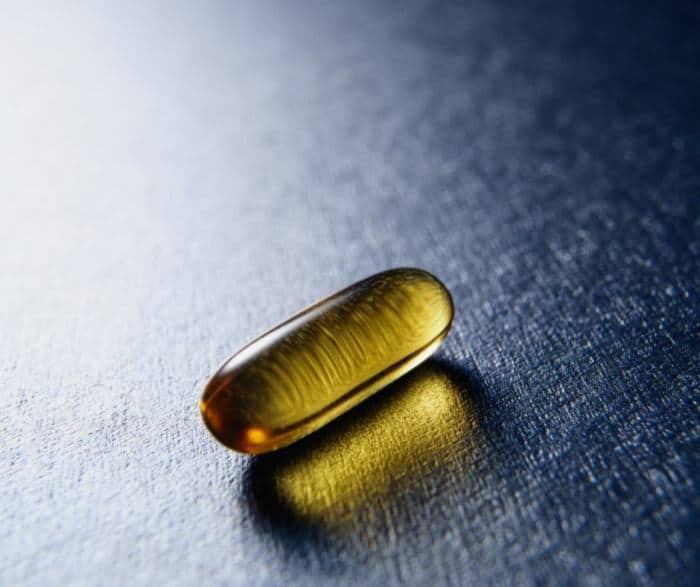 Rheumatoid arthritis is an auto-immune disease.

Various studies have suggested that vitamin E supplementation in excess of current intake recommendations has shown to enhance immunity which can be beneficial in rheumatoid arthritis.

The natural age-related decline of the immune functions may also be a cause of certain types of arthritis like osteoarthritis and rheumatoid arthritis.

Vitamin E has been found to reduce susceptibility to infections and enhanced response to immunization especially in the elderly.

Fish oil along with 500 IU of Vitamin E in the diet delays onset of autoimmunity by lowering levels of interleukins and tumor necrosis factors.

What does this mean? This signifies the importance of incorporating anti-oxidants like Vitamin E and omega 3 fatty acids present in fish oil to delay progression of auto-immune diseases and thus can be helpful in treating condition of Rheumatoid arthritis.

Although the severity of pain may vary is a common symptom seen in all types of arthritis.

Research studies have shown that oral doses of Vitamin E supplementation in the diet is beneficial in the treatment of rheumatoid arthritis.

The study was performed on forty-two patients who were given a dose of 600 mg twice a day for a period of 12 weeks.

The results gave evidence regarding the fact that pain significantly reduced in patients with Vitamin E in the diet as compared to the control group.

Vitamin E exerts a small but significant anti-inflammatory and analgesic activity which are independent of each other.

What does this mean? Vitamin E has shown a positive effect in reducing pain in the affected joints giving a sigh a relief to patients suffering from arthritis.

6. It protects metabolic health and heart

Vitamin E has shown immense potential in reducing risk to metabolic health and heart in patients suffering from arthritis.

It has been observed that patients with arthritis are at a higher risk of developing cardiovascular diseases and high levels of blood pressure.

In such cases, Vitamin E supplementation in the diet has proved to be beneficial.

An experimental study was conducted on patients suffering from rheumatoid arthritis. The aim of the study was to determine the effects of Vitamin E in combination with linoleic acids on serum lipid profiles and blood pressure of these patients.

. The dosage of Vitamin E provided in this case was 400 mg daily for three months.

Another study showed that Vitamin E was capable of reducing high levels of homocysteine that are associated with vascular endothelial dysfunction in patients with arthritis.

The study was conducted on animal models, rats induced with arthritis to evaluate effects of Vitamin E administration.

It was observed that vitamin E had a relaxant effect, normalized levels of homocysteine and improved vascular dysfunction in the animal models.

What does this mean? The activity of Vitamin E has shown tremendous scope in the treatment of metabolic risks to the health and overall health associated with arthritis. Consuming vitamin E supplements or foods enriched in Vitamin E have an excellent therapeutic effect in alleviating symptoms like cardiovascular diseases related to arthritis.

Arthritis is mainly involved progression of articular arthritis which is caused due to increased oxidative stress which enhances with age and has not yet been controlled.

Vitamin E has an antioxidant effect which can reduce this oxidative stress caused by free radicals.

The anti-inflammatory and analgesic activity of Vitamin E exerts a therapeutic effect which relieves pain and inflammation in the joints of arthrtitis patients.

Thus, since Vitamin E plays an important role in alleviating symptoms related to arthritis it becomes necessary for incorporating it in the diet especially for those suffering from arthritis.

Unless advised by the doctor one should not opt for vitamin E supplementation. Including dietary sources of vitamin E can benefit in arthritis.

Dosage and Natural Sources of Vitamin E For Arthritis

The recommended dietary allowance of Vitamin E is 4mg for infants, 11mg for children aged between 9-13 years, 15 mg for adults and 19 mg for lactating mothers.

According to the tolerable upper intake levels proposed by Food and Nutrition Board for Vitamin E , 1100 mg/day in supplemental form or 1500 mg/day in natural form is considered safe for adults. No appropriate tolerable dosage has been reported for infants till now.

People on medication can seek the advice of a doctor before consuming Vitamin E supplements.

It is present in significant amounts in green leafy vegetables and fortified cereals.

Research has not found any adverse side effects yet associated with the consumption of Vitamin E in food. However, overdosage of Vitamin E supplements has found to cause hemorrhage, inhibit blood coagulation and inhibit platelet aggregation.

Vitamin E can cause bleeding hence people consuming blood-thinning medications or those who are about to undergo surgery must avoid Vitamin E supplements or foods.

One must avoid the overdose of Vitamin E and strictly follow the recommended dietary allowance suggested by the Food and drug administration.

The therapeutic properties of Vitamin E can play an important role in the treatment of arthritis when incorporated in the daily diet in appropriate dosage.

Vitamin E is a powerful anti-oxidant.

It enhances the immune system, has anti-inflammatory effects and reduces the progression of bone and cartilage reduction.

Vitamin E supplements can be used as alternatives to drugs involved in alleviating symptoms related to arthritis.

READ THIS NEXT -
Benefits of Endurance Training for Arthritis + Top 5 Exercises
7 Benefits Of Fish Oil In Rheumatoid Arthritis
Motion Exercises for Arthritis - How Can they Help?
Can Vitamin E Help in Acne Treatment?

1 thought on “6 Awesome Benefits Of Vitamin E In Arthritis”