Osteoarthritis is the most common type of arthritis mainly affecting people when they grow old and weak.

Although it can affect younger people too, it is more prevalent in older ones who are at the age of 45 and above.

Reports have shown it occurs in more than 25% of the Australian population over the age of 65.

Osteoarthritis is a disease of entire joint affecting joint cartilage, its ligaments, and underlying bone.

It is a degenerative disease showing symptoms such as joint pain, stiffness, weakness in joint muscles and numbness in arms and feet.

There are a number of factors which causes this disease such as aging, being overweight, injury of a joint, genetic problem and stress on joints due to occupation or sports activity

Treatment and Management of Osteoarthritis

Treatment of osteoarthritis completely depends on their cause and symptoms.

Grapefruit was bred in the 18th century and it was formed when an orange was crossed with a pomelo.

It was named grapefruit because it grew in clusters like grapes.

This fruit is available almost throughout the year but the main growing months are November and June.

Florida is the largest producer of grapefruit.

Grapefruit is one of the most nutritious fruits and one should make it a point to have it regularly.

It has very fewer calories and has abundant nutrients. It is also a rich source of vitamins A and C.

A study conducted at Harvard Medical School reported that grapefruit has a glycemic index of 25.

This means that it does not affect the levels of blood sugar and insulin. Benefits of grapefruit are:-

This article focuses on the effectiveness of grapefruit in osteoarthritis.

3 Awesome Benefits of Grapefruit In Osteoarthritis

Here are some interesting and science-backed health benefits of grapefruit in osteoarthritis. 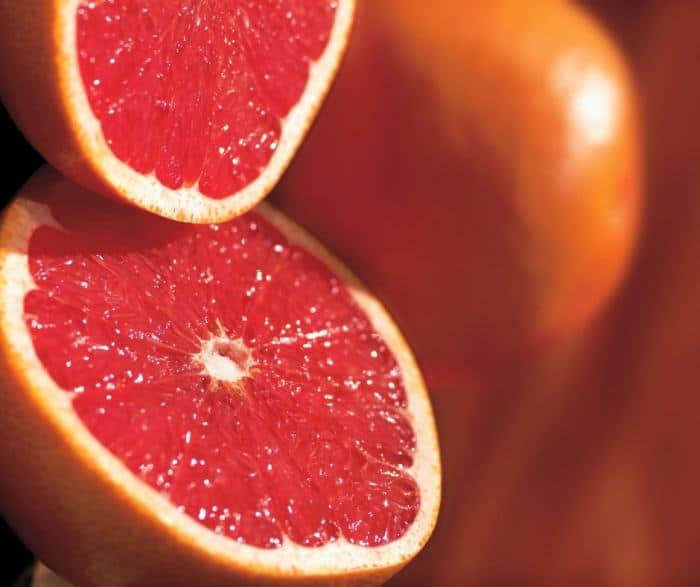 Grapefruit is a rich source of vitamin C and a lot research has been conducted to assess the effects of vitamin C on osteoarthritis.

The Framingham epidemiological study reported that if you take a sufficient amount of vitamin C, then the risk of developing osteoarthritis reduces by 3 times. This means that there is an inverse relationship between vitamin C intake and loss of cartilage.

Tissue damage and loss of cartilage can be caused by harmful substances that lead to oxidative stress.

Oxidative stress is caused by an increase in the highly reactive molecules that react with other molecules in the cells and lead to tissue damage and cartilage loss.

Hence the anti-oxidants in vitamin C neutralize these harmful molecules and reduce the damage.

Ascorbic acid or vitamin C present in grapefruit were also found to involve information of both collagen and proteoglycans of cartilage tissue.

Collagen and proteoglycans are two major components of cartilage tissue which provides both cushions like function and lubrication for joint movement and their proper functioning is very important in osteoarthritis patients.

A study was published in Arthritis and Rheumatism which investigated the effectiveness of antioxidants like vitamin C in protecting against the development of osteoarthritis.

A difference in the progression of osteoarthritis was seen in the patients who were given vitamin C with those who were given non-antioxidant vitamins like B1, B6, niacin, and folate.

At the end of the study period, it was reported that if we increase our intake of vitamin C, then it can decrease the progression of osteoarthritis by decreasing the loss of cartilage. In contrast, this was not seen with patients who were given non-antioxidant vitamins.

It has been seen that being over-weight is a factor which can cause osteoarthritis.

Obesity can put pressure on the knee joints which can injure them and cause tissue damage and cartilage loss.

Grapefruit is a low-calorie fruit and if taken 20 minutes before a meal, it can reduce your appetite.

This is probably because of the water content in this fruit makes you feel fuller faster. The compounds in grapefruit reduce the level of insulin in the body which can help lose weight.

A study was published in the Journal of medicinal food which studied the effectiveness of grapefruit in losing weight.

In this study, 91 obese patients were given grapefruit juice and grapefruit capsules 3 times a day before each meal.

The effects of grapefruit on metabolism were studied for 12 weeks.

At the end of the study period, it was observed that having half a grapefruit before each meal leads to a significant loss of weight. Grapefruit was also reported to improve insulin resistance.

What does this mean? Grapefruit is extremely effective accelerating in weight loss. By losing weight, a person can reduce the pressure he puts on his joints, especially knee joints and prevent knee injury. This can in turn prevent the development and progression of osteoarthritis.

Lycopene is an organic pigment which gives grapefruit its pink colour. Lycopene is considered to be an effective anti-inflammatory agent.

This is because it is known to act against and reduce the effect of pro-inflammatory mediator TNF alpha.

Hence it lycopene decreases the secretion of TNF alpha and other pro-inflammatory cytokines like IL-8 and IL-6 (small proteins that cause inflammation).

Grapefruit is effective in reducing inflammation in osteoarthritis because of the presence of lycopene.

A study published in Molecular Nutrition and Food Research reported that lycopene showed anti-inflammatory properties by decreasing the secretion of pro-inflammatory compounds like TNF alpha.

Another study published in Die Pharmazie reported that lycopene has a significant effect in reducing the levels of pro-inflammatory cytokines like IL-8 and IL-6.

A study was conducted to detect the effect of naringin (a phytochemical synthesized by plant), well known falvanone glycoside found mainly in grapefruit and other citrus fruits on the key mediators (precursor which helps to connect) , namely T cell subsets (lymphocytes), CD4+GITR+expressing cells, CD4+CD25+Foxp3+(Treg), Th1/Th2cytokines  which are responsible for causing inflammation in arthritis. In the study Balb/c mice were treated with naringin in the concentration of 20, 40, and 80mg for 14 days.

What does this mean? This means that the lycopene in grapefruit is an amazing anti-inflammatory agent and should be used by patients who are suffering from osteoarthritis.

Dosage of Grapefruit for Osteoarthritis

The recommended dosage for grapefruit is based on the clinical trials that have been taken place to see its effectiveness.

It is safe to consume 1/2 grapefruit daily. If you are taking juice, then the daily consumption should be 8 oz / 1 cup of grapefruit.

Easy ways to include Grapefruit in diet

Grapefruit is the delicious fruits in the citrus family, having a slightly tangy or sweet taste.

Drinking a glass of grapefruit juice along with other snacks in breakfast can be the healthiest way to start your morning.

Below are simple tips to include grapefruit in your diet.

Peel the fruit and separate the individual wedges and store this wedges into an airtight container in the fridge.

Have them early morning with your other breakfast snacks. This practice will save you time when you are in the rush to go to the office or school.

The most delicious way is to put them in the juicer and extract their juice. A glass of grapefruit juice is enough to satisfy your hunger.

You can squeeze little lemon juice on top of it to make it tastier.

Try to incorporate this fruit with other fruits like apples, bananas, strawberries to make a delicious mixed fruit salad.

Grapefruit smoothie can be also a very healthy option for people who love fruit smoothies. Include grapefruit juice with banana and strawberries juice.

Add some vanilla flavored yogurt, honey, and ice cubes and blend it to make the smoothie.

It was shown that the chemical present in the fruit furanocoumarins interferes with a chemical which is naturally produced in humans stomach known as cytochrome P450 3A4.

These furanocoumarins are produced by plant tissue as a defense mechanism against foreign particles or predators.

There is the number of drugs found, that interact with grapefruit such as statins group such as simvastatin, lovastatin, and atorvastatin which are taken for treating cholesterol problems.

An antibiotic like erythromycin, quinine, primaquinine used to treat bacterial infection, drugs used for cancer treatment like crizotinib, dasatinib, etc. are found to become more potent when they come in contact with grapefruit.

Hence it very crucial to consult your doctor about your diet when you take specific medicines.

Grapefruit is an amazing fruit which should be utilized properly for its beneficial properties.

It should be used patients and also recommended by doctors to prevent inflammation and the progression of osteoarthritis.

Apart from using it for arthritis, it should also be considered for its whole lot of amazing effects on skin and health.

Considering it has the ability to interact with other medications, a doctor should always be consulted to before taking grapefruit to prevent the side effects.

This is because it will eventually cause more harm than good.