Rheumatoid arthritis is a debilitating disorder characterized by joint stiffness, inflammation, and pain.

It is an autoimmune disease affected by various genetic and environmental factors.

In chronic cases, it might affect the day to day functioning of the patient as well.

Thus providing proper physical as well as mental care to the patients becomes of utmost importance.

Allopathic medications provide symptomatic relief and do have numerous other side effects too.

Thus the use of other alternative medications is quite common among patients with rheumatoid arthritis.

Ginger as a ‘Wonder spice’ for Rheumatoid Arthritis

Natural herbs and spices have the answer to the greatest medical challenges of humans.

This is the reason why these herbs have been given great importance in the ancient medical literature.

Ginger is one such herb plant which is well known for its therapeutic roles. It is a native to South East Asia, China, Caribbean, and West Africa.

It is a plant rhizome just like carrot and is used widely in Chinese and Indian cuisine.

Apart from its culinary uses it is also used in Ayurveda and Chinese medicine for various health ailments. There are scientific evidence that prove its role in prevention of motion sickness and sea sickness.

It also helps in prevention of morning sickness, stomach upset, and nausea due to cancer, muscle soreness, respiratory troubles, and menstrual pain.

An article in the Journal of Medicinal Food states that red ginger was also used as a painkiller for arthritis in Indonesia.

It relieves joint pain and also improves joint movement in patients with rheumatoid arthritis. Thus it won’t be wrong to call it a ‘Wonder Spice’!

The analgesic and anti-inflammatory effects of ginger bioactive compounds have great potential in the treatment of the symptoms of rheumatoid arthritis. These have the potential to stop the progress of the disease as well as the ability to reverse the damage caused by it.

Inflammation is a major characteristic aspect of rheumatoid arthritis.

Various pro-inflammatory molecules are known to initiate the development of this disease.

The anti-inflammatory property of ginger is known for a long time and many research studies have confirmed it over time.

Gingerol component of ginger is involved in suppression of prostaglandin and leukotriene synthesis.
In a study, the combined action of gingerol and essential oils from the ginger extract were found to reduce inflammation in the case of rheumatoid arthritis.

There have also been findings that ginger is capable of reducing inflammation by lowering the expression of chemokines (pro-inflammatory molecules) in the synovial cells.

What does it mean? It means ginger is useful in reducing the inflammation in rheumatoid arthritis. Regular use of ginger is also capable of preventing the onset of this disease by suppressing the expression of the molecules involved in inflammatory response in the body.

The impact of oxidative stress has a high adverse effect on the development of rheumatoid arthritis.

There is over-production of reactive oxygen species, which leads to lipid peroxidation, oxidation of proteins and DNA damage in the rheumatoid arthritis patients.

There is also insufficient anti-oxidant defense in them.

All this contribute to the tissue damage and cartilage destruction in rheumatoid arthritis patients.

The external supplementation of anti-oxidant is known to be effective in managing oxidative stress.

There are substantial evidence for the anti-oxidant activity of ginger, especially the gingerols components.

The anti-oxidant activity of gingerols is attributed to its radical scavenging action and inhibitory action on the free radical producing metabolic pathways.

The shogaols fraction also is a potent anti-oxidant and has a high radical scavenging activity.

What does it mean? It means intake of ginger can increase the anti-oxidant defence mechanism of the body. This can help in prevention of tissue and cartilage damage caused by oxidative stress in rheumatoid arthritis patients.

Pain is an inevitable consequence of the inflammation of joints. In the case of rheumatoid arthritis, there is also an involvement of neurological signals in the generation of pain.

As a result of inflammation, the pain signals are stimulated through the neuropeptides and other metabolites and changes in the ion channels that reach the brain to generate the sensation of pain.

Ginger has been found to have anti-nociceptive (pain killing) effect.

It is known to block calcium channel involved in the nociceptive pain generation, i.e. pain generated by neurological signalling.

What does it mean? It means ginger can be used to decrease the pain in rheumatoid arthritis. It has ability to reduce pain caused by inflammation as well as the neurological signals. 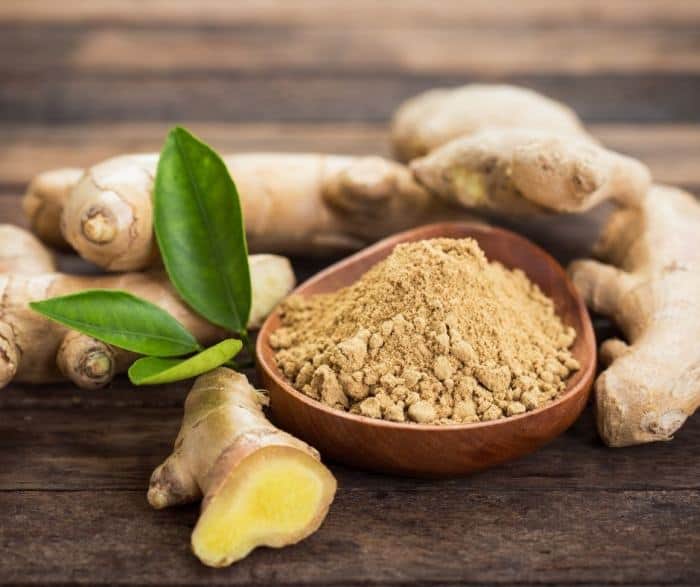 Rheumatoid arthritis severity leads to many complications in the body, beyond the bones and joints.

These complications may be related to heart problems, lung problems, kidney dysfunction and many more.

Ginger has been studied to find that it has protective effects against various complications related to this disease.

The combined anti-oxidant, anti-inflammatory and analgesic effects of ginger compounds is effective in protecting the body from rheumatoid arthritis severity and hence its complications.

What does it mean? It means consumption of ginger can protect the body from complications of rheumatoid arthritis by reducing its severity.

Morphine is sometimes prescribed to rheumatoid arthritis patients for reduction of pain. But morphine is known to have a large number of side-effects.

Also, morphine is an addictive drug and people tend to develop a dependence on this drug which is hard to overcome.

Ginger has potential in reducing the dependence on morphine and helping in better pain management.

In a study, ginger extract was able to prevent morphine dependence.

It also could attenuate the withdrawal symptoms (symptoms exhibited upon sudden discontinuation of an addictive drug) of morphine addiction.

What does it mean? It means ginger can be used to prevent dependence on the pain relieving drugs that are addictive. It is also useful in lowering the withdrawal symptoms related to these drugs.

Dosage of Ginger In Rheumatoid Arthritis

Ginger is a versatile food product. It can be used in the form of juice, powder, pieces, paste or extract for benefits in rheumatoid arthritis.

The ginger powder, pieces or paste can be added to soups or other such dishes.

Ginger juice can be added to vegetable or fruit juices. 1-2 tablespoon is recommendable for the juice form.

Ginger pieces can be boiled with water or tea and drank cold or hot. The use of ginger in beverages is an effective and tasty option.

Ginger extracts are also available in the form of capsules or tincture. About 25-30 drops of tincture is recommended twice or thrice daily.

Ginger is regarded as a safe food for consumption. But there may be some minor side-effects due to improper use. It is better to take some precautions before using it.

1. High dosage of ginger can have side-effects.
Overconsumption of ginger can upset the stomach and cause gas and diarrhea. It can also cause heartburn, nausea, and irritation in the mouth.

2. Ginger may cause allergy.
Ginger allergy is rare but it may sometimes cause an allergic reaction in our body due to intolerance of the immune system with some of its compounds. There may be the development of rashes on the skin, irritation in eyes, lips or mouth, vomiting, etc.

3. High dose of ginger during pregnancy must be avoided.
Intake of ginger in high amounts can have adverse effects on pregnancy. There is a possibility of greater side-effects and miscarriage.

4. People with gallstones should avoid ginger consumption.
If one has a stone in the gall bladder, ginger consumption must be avoided as it improves bile juice flow. This can lead the stone to flow into the bile duct and stuck there which may be harmful.

5. Ginger should be avoided in case of a few heart problems.
Ginger can lower blood pressure so people suffering from heartbeat irregularities should avoid it.

It can protect from side effects of arthritis drugs and serve as excellent adjuvant therapy.

Including ginger in diet or juicing it or making tea with ginger can help reduce pain in arthritis.