Osteoarthritis is the most common type of arthritis.

It is a joint disease characterized by the breakdown of joint cartilage leading to pain, stiffness, and disability.

Symptoms include pain and stiffness in the joints.

It is most commonly observed in the thumbs, neck, lower back, knees, and hips. Most often it affects the hands, hips, knees, and spine.

There are various ways to treat arthritis most of which involve bringing about changes in one’s lifestyle like controlling weight and exercise along with nondrug therapies, medication to relieve pain and in some cases surgery.

Treatment aims at controlling the pain and improving the function of the joint.

Soybean has found to be an emerging nutritional supplement in curing osteoarthritis. Soybean is also known as Glycine max, or soya bean is a legume native to East Asia.

It is widely grown for its edible seed that is used for numerous purposes and produces significant amounts of protein.

Soybean capsules are used for relieving pain and improving functional ability in patients. Research has identified soybean as a potential supplement in the treatment of osteoarthritis.

What are the Health Benefits of Soybeans?

Soy foods have been popular for the past 25 years for their ability to prevent and treat various diseases.

Soybean is composed of essential components like genistein, isoflavones, and daidzin that provide anti-inflammatory, antioxidant and anti-carcinogenic properties to it.

Thus they are found to be helpful in improving cardiovascular health.

Soy foods are rich in isoflavones that are known to be estrogen and phytoestrogen compounds.

Soybean possesses high antiproliferative activity against cancer cells. Soy milk prevents acne outbreaks and can be used as an alternative to total and skim milk.

What are soy isoflavones and soy unsaponifiable?

Soy Isoflavones are compounds Genistein and Diadzein found in soy foods that affect a variety of mechanisms in our body systems. They mimic the female hormone estrogen to an extent.

They have been found to be involved in reducing the risk of breast cancer, lowering cholesterol levels, preventing cardiovascular diseases and osteoarthritis.

Soy unsaponifiable are natural vegetable extracts made from soy oil and consist of approximated 1% leftover fraction that cannot be made into soap after saponification.

Soy unsaponifiable have been found to be essential in curing patients suffering from osteoarthritis. They are now available in the form of capsules as an alternative to synthetic drugs. 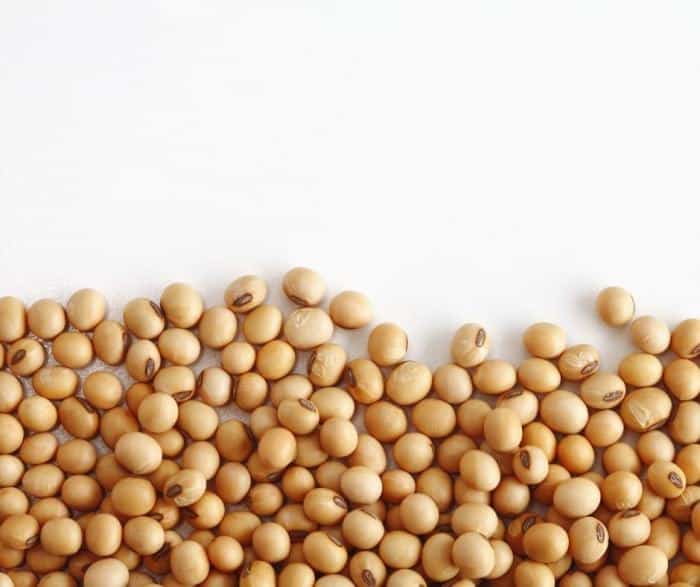 5 Proven Benefits of Soybean in Osteoarthritis

Osteoarthritis is a life-altering, and painful disease suffered by thousands of people worldwide and is one of the common causes of disability.

Numerous studies are ongoing to find the best possible cure for osteoarthritis.

Avocado- Soybean unsaponifiables have found to be effective as an alternative to drugs for the treatment of osteoarthritis.

An animal study was conducted by Gabay et al. to determine the effect of avocado-soybean unsapoinifiables on signaling pathways of a mouse or human chondrocytes.

The study concluded that Avocado-soybean unsafonifiables reduced inflammation in the affected cells by reducing expression levels of metalloproteinases and Prostaglandins in the study model.

This indicated the use of avocado-soybean unsaponifiables in reducing symptoms of inflammation in osteoarthritis.

What does this mean?Avocado-soybean unsaponifiables show anti-inflammatory activity and hence be beneficial in preventing and curbing inflammation caused in the joints due to osteoarthritis.

Avocado-soybean unsaponifiables have beneficial effects on the cartilage. A study published in the Journal of Rheumatology was performed on human chondrocytes isolated from patients suffering from osteoarthritis.

The results suggested that Avocado-soybean unsaponifiables may promote repair of the cartilage by acting on the bone osteoblasts.

Another study from the same journal suggested that avocado-soybean unsaponifiables effects the metabolism of human chondrocytes by increasing the production of aggrecan (protease specific to the cartilage).

It had structure-modifying effects in osteoarthritis-affected cells preventing the degradation of cartilage and promoting cartilage repair.

What does this mean? Avocado-soybean unsaponifiables have been found to have a protective effect on degradation of cartilage. They promote cartilage repair by acting on the chondrocytes of the bone thus helping in the treatment of osteoarthritis.

An experimental study conducted in 2001 to compare the effect of different dosages of avocado/soybean unsaponifiables in patients with knee osteoarthritis revealed that on the administration of 300mg and 600mg daily symptoms of osteoarthritis improved with no difference in the two dosages.

A study published in 2004 in the journal of phytomedicine described the effects of soy protein in alleviating symptoms of osteoarthritis.

The study was carried out in 135 people suffering from osteoarthritis or knee joint pain.

They were provided with 40g of soy protein daily for a span of three months.

The results revealed that soy protein was capable of relieving pain and stiffness in the joints affected by osteoarthritis.

It was the first study to provide evidence of the beneficial effects of soy protein in the management of osteoarthritis.

One such clinical study focused on studying the effect of soybean unsaponifiables on cells affected by osteoarthritis.

It played an efficient role in inhibiting inflammation of the affected joints.

The combination of avocado and soybean oil was successful in preventing growth in osteoarthritis pathogenesis.

The study concluded that soybean, when taken with avocado, reduces pain and stiffness in the joints, improving the function of the joints and resulting in decreased dependence on analgesics.

Another controlled clinical study was performed to determine the effects of Avocado-soybean unsaponifiables on the knee and hip osteoarthritis. The study revealed the efficacy of the compound in improving symptoms associated in osteoarthritis patients.

The compound was well tolerated by the patients and its protective effect persisted even after the end of the treatment.

What does this mean? Avocado-soybean unsaponifiables show improvement in symptoms associated with osteoarthritis. They are well tolerated by the osteoarthritis patients and are successful in preventing the progression of osteoarthritis.

4. Soybean reduces the dependence on painkillers in osteoarthritis

Avocado-soybean unsaponifiables have been proved as potential natural drugs, as an alternative to other painkiller drugs in the treatment of osteoarthritis.

A clinical study was conducted by Blotman et al. in 1997 to determine the safety of avocado-soybean unsaponifiables as anti-inflammatory drugs for three months in patients with osteoarthritis of the knee and hip.

The results showed that patients treated with avocado-soybean unsaponifiables experienced lesser pain over time as compared to the control group suggesting the reduction of dependence on painkillers and shifting to natural supplements for treating pain caused in the affected joints in osteoarthritis.

What does this mean? Avocado-soybean unsaponifiables are natural extracts that curb the pain caused in the joints due to inflammation and swelling. Hence they can be considered as an effective alternative to painkillers containing chemical compounds.

Avocado-soybean unsaponifiables improve antioxidant status in patients with osteoarthritis. This is mainly because of the presence of soy isoflavones in them.

An animal study published in the Journal of Science of Food and Agriculture confirmed that consumption of dietary soy isoflavones increases the antioxidant capacity in plasma and anti-oxidant enzymes in various tissues.

The effects were dependent on the form of administration and the mechanism of antioxidant balance of the organism.

Soy Saponins are compounds that are found in abundance in soybeans and have the ability to reduce inflammation as well as inhibit the excessive oxidation caused by reactive oxygen species.

A study was carried out by Zha et al. in 2014 to investigate the inflammatory pathway inhibited by soy saponins.

The results suggested that soy saponins could decrease inflammation and oxidation caused by reactive oxygen species.

Soybean can be used as an anti-oxidant supplement leading to effective treatment of osteoarthritis based on evidence revealed from various clinical trials.

It contains essential compounds like campesterol, phytosterol, stigmasterol and many other compounds that contribute to its antioxidant and anti-inflammatory potential.

What does this mean? Avocado-soybean unsaponifiables show anti-oxidative properties that reduce excessive oxidation caused by reactive oxygen species. It can be used as an anti-oxidative supplement for treating symptoms associated with osteoarthritis.

How to include soybean in the diet?

Soy milk is easily available in the market.

It can be added to chocolate and vanilla to give a soy flavor. One must choose unflavored soy milk in dishes like soups.

Soft or silken tofu which is made by coagulating soy milk can be blended and flavored to make puddings, sauces, salad dressings, and dips.

Soy is available in the form of cream cheese, yogurt, creamer and ice cream. Soy flour is also available in most markets. However, it cannot completely replace wheat flour since it lacks sufficient amounts of gluten.

An easy way to get soy protein is to buy a container of soy protein powder from the supermarket in the vitamins section.

Adding soy to your diet is a great way to prevent pain and stiffness in the joints if suffering from osteoarthritis.

Dosage of Soybean For Osteoarthritis

Research studies suggest that a single daily dose of soybean supplements incorporated in low-fat foods proves to be essential in preventing the risk of cardiovascular diseases.

According to the Food and Drug Administration 25gm per day of soy protein incorporated in a diet low in saturated fat reduces the risk of coronary heart disease.

Taking all the recommended dosage into account, for a young adult two servings of soyfoods per day seems reasonable.

Till now there are no known side effects of consuming soybean. Its consumption is considered safe.

Some mild side effects include constipation, bloating and nausea. Pregnant women must avoid intake of soy products in large doses as it may harm the development of the baby.

Children suffering from cystic fibrosis have difficulty in processing proteins. Since Soy is rich in proteins, they must avoid its intake.

People suffering from kidney related problems must avoid its consumption. Soy is rich in phytoestrogens that increase the risk of kidney failure. Oxalates found in soybean lead to the formation of kidney stones especially in people who have a history of kidney stone formation.

Soybeans are rich sources of isoflavones that are classified as both phytoestrogen and estrogen receptor modulators. Human research supports the safety and effectiveness of soy foods.

According to the European Food Safety Authority isoflavones do not have any side effects. They do not affect the breast, thyroid, and uterus of postmenopausal women adversely.

If suffering from any health condition, especially cancer, avoid consuming soybean supplements without a doctor’s recommendation.

Although there are numerous drug therapies and pain medications that are involved in the treatment of osteoarthritis symptoms, natural dietary supplements are always considered safer alternatives with less undesirable effects.

Soybean supplements can be considered as effective alternatives in curing pain, stiffness and alleviating other symptoms of osteoarthritis.