H.pylori is a spiral shaped bacteria responsible for various types of gastric ailments in humans. It can persist for entire life in the stomach of the person.

The inflammation due to this bacteria result in various gastric diseases from mild discomfort like superficial gastritis to very severe ailments such as gastric cancer, gastric ulcer, chronic gastritis.

Manuka honey is a special kind of honey which honey bees made by using the nectar from wild Manuka trees related to Leptospermum species. These Manuka trees are native to New Zealand and Australia.

Manuka honey has many special properties which are absent in other honey. It is this special Manuka factor of

Manuka honey which generates the interest of many scientists. Now Manuka honey is the most widely studied form of honey for its various medicinal uses.

Almost all variety of honey possess antibacterial properties because of osmotic effect of their high sugar content but Manuka honey has most potent antibacterial, antimicrobial, anti-inflammatory, antiseptic activities.

It also possesses anti-oxidant properties because of the presence of high levels of methylglyoxal. It has the capability to treat many diseases.

Manuka honey is considered as best medicinal aid to treat this infection and gave relief in gastric ulcers. Manuka honey contains many compounds which help to fight the infection.

These properties help Manuka honey to fight microbes like H.pylori.

Manuka can inhibit the growth of a wide range of the bacteria and microbes and hence is very effective for antibiotic resistant strains of microbes.

It has been proved in a study conducted on 477 honey samples derived from wide variety of plants. In these samples it was observed that 274 varieties of honey have useful therapeutic activities while only 80 samples have non-peroxide activity. These 80 samples were mostly derived from Leptospermum sp.

Later in another study it was found that non-peroxide activity of Manuka honey is due to the presence of methylglyoxal. And Manuka nectar has ample of methylglyoxal and so as the honey produced from this nectar.

What does this mean?
Manuka honey is a potent antimicrobial agent and this property of manuka honey help in preventing H.pylori infection.

A bacteriostatic compound has the potential to stop the growth of the bacteria. They stop bacteria from reproducing further and hence prevent them from causing infection.

In a study it was found that Manuka honey contain phytochemicals and anti-bacterial factors in it which resist the growth of the H. pylori bacteria and certain other types of bacteria. In this study H.pylori was tested for its sensitivity to the Manuka honey.

Five isolates were taken from the biopsies of gastric ulcers containing H.pylori and these isolates were tested if they are sensitive to 5%, 20% and 40% solutions of Manuka honey.

What does this mean?
This indicates that the manuka honey act prevent the growth of bacteria by inhibiting its growth cycle so that bacteria can’t multiply in stomach.

This shows the presence of some other compound in Manuka honey which contributes to its bactericidal nature. Later this compound was identified as defensin-1.

What does this mean?
Manuka honey not only contains peroxide and methyloglyoxal to kill bacteria but certain other proteins and components like defensin-1 are also present. 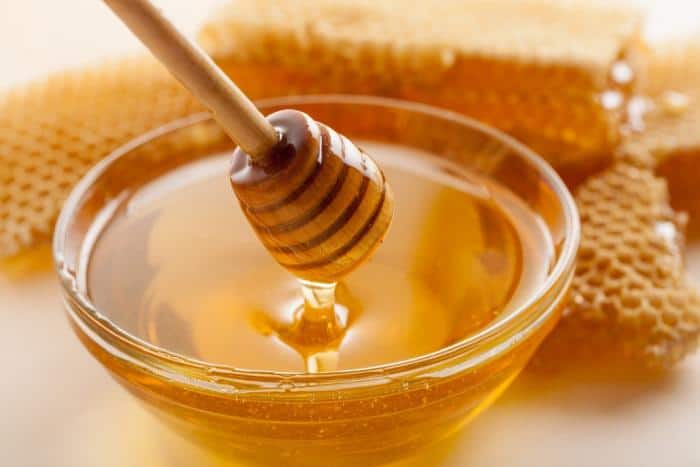 The viscous honey forms a layer around the bacteria which prevent its adhesion to the stomach wall and hence reduce the chances of damage cause to the wall due to bacterial infection.

What does this mean?
This shows the mode of action of manuka honey by which manuka honey prevents bacterial growth is by preventing them from adhering to host cells.

It has been proved by an animal study that Manuka honey has gastroprotective effect against ethanol induced gastric ulcers .

In this study analysis was conducted for lesions, ulcers and oxidative stress in stomach before treatment with Manuka honey. After treating with Manuka honey for some weeks a significant decrease in ulcer index was observed.

The mucosa (gastric lining) was completely protected from the lesions and preserved the gastric glycoproteins. It also inhibits lipid peroxidation by its anti-oxidant components and hence exerts antiulcer properties.

What does this mean?
This means that manuka honey prevents the infection not by just killing bacteria but also protect the gastric lining by reducing the effect of bacterial activity and healing the ulcer.

The Manuka honey stimulates the immune system of the person and improves the secretion of various immune active substances like cytokine, macrophages, TNF-alpha and monocytes.

These substances kill the bacteria by activating natural defence mechanism of body and also help in healing of any epithelial layer damaged due to ulcers and infection.

They promote easy growth of epithelial tissue and prevent any further damage.

The antioxidant nature of honey is due to the presence of various flavonoids and other polyphenols. These antioxidant substances help fighting the bacteria in stomach and eliminate any toxic compound produce by the bacteria. Due to which bacterial damage is reduced and digestion improves.

What does this mean?
The antioxidant and anti-inflammatory properties of manukahoney help in removing toxic substance produce by bacteria and also boost the immune system.

UMF is a registered trademark for ensuring quality of honey and test its standard to avoid its misuse.

Manuka honey can be consumed by either dissolving it in cold or lukewarm water or directly 1 teaspoon. Avoid using it with tea and hot water as high temperature would degrade essential enzymes present in it and hence affect the quality of honey.

Manuka honey is very beneficial for treating gastric ulcers due to its potent bactericidal property against H.pylori.

This property of honey has been put to its benefit since ancient times and has proved to be very efficient in preventing the growth of harmful bacteria in stomach. But since it has been said that ‘excess of everything is detrimental’.

Likewise use of Manuka honey also offers some limitations in its use.

In a study it has been found that the methylglyoxal content of this medicinal aid is very high as compared to other honey available. So it can have a potential risk factor in people suffering from diabetes.

Methylglyoxal is a protein-glycating agent and is a precursor of glycation products. Hence there is risk of occurrence of diabetic foot ulcers in patients suffering from diabetes.

Also methylglyoxal has ability to modify the structure and function of target molecules involve in healing. So delayed healing of ulcers was seen in the diabetic patients who consume Manuka honey.

The methylglyoxal content of Manuka honey is found to be 38-761mg/kg which is 100 times more than the conventional honey . It has both its pros and cons.

In a study  it has been found that administration of methylglyoxal can have various negative effects which can interfere with the immunological components of body help in easy healing. But this study only included methylglyoxal and not the Manuka honey.

This is now evident that methylglyoxal content of Manuka honey can have negative effects on the diabetic patients so it is advisable for such patients to consume Manuka honey in very less doses or at the prescription of doctor.

While in normal healthy person Manuka honey seems to cause no adverse effects so they can consume it on regular basis to get its benefits. While certain people might be allergic to honey they must take precautions while consuming honey.

It is better to first test the effect of Manuka honey before using it by initially consuming a very less amount and look for any sign of allergy for 1-2 days.

Diabetic patients should either avoid its consumption or if necessary should consume at very low concentrations.
For children special medical advice should be taken before its use.

A very high dose should be avoided in any case. Store honey in glass or plastic bottles at room temperature in the dark for better use and longer shelf life.

It is quite evident from various studies performed on animals and patients suffering from gastric ulcers that Manuka if every effective in treating gastric ulcers caused by infection from H.pylori in the stomach.

It not only reduce the activity of bacteria and kills it but also boost the immune components to act on bacteria and improve healing efficiency of cells. Its antibacterial and antiulcer activity is very beneficial in fighting the H.pylori.

Also its daily consumption is safe for non-diabetic people and even in case of diabetic patients controlled use of Manuka honey with regular check on blood sugar levels can help fighting the H.pylori infection.

READ THIS NEXT -
What is an Ideal Dosage for Goji Berry
5 Ways Coconut Oil Promotes Liver Health
Can Quinoa Help in Cholesterol Problems?
Coconut Water for Detox
Cinnamon for Muscle Soreness
How to Plant Aloe Vera at Home