Aloe vera is a thick green cactus-like plant that was once grown abundantly as weed, is now, a plant of high medicinal value.

The current article discusses if aloe can be beneficial for stomach issues specifically ulcers.

Although the medicinal uses of aloe vera trace its history into the ancient Egyptian times, the advent of technology has brought it in limelight.

A bit about stomach now.

The natural lining of the stomach protects it from damage.

This thick layer can be reduced in many ways like a bacterial infection, long-term intake of drugs like aspirin and ibuprofen, or excessive acidity in the stomach, which results in the digestive juice to eat away the stomach lining and resulting in painful sores called ulcers.

The lesions in the stomach lining can be cured by the use of aloe vera because of its anti-bacterial and anti-inflammatory activity.

Aloe Vera plays an important role in remedying, protecting and healing of the ulcers.

The use of aloe vera juice in easing the pain of ulcers and repairing the walls of the stomach is very well known.

Aloe vera juice in the treatment of ulcers is recommended because of its following properties: 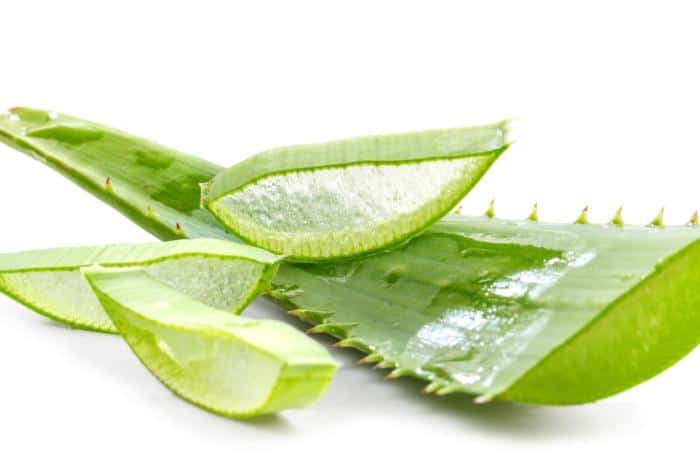 A human study carried out on patients suffering from gastric ulcers in Iran found that oral administration of aloe vera gel twice a day along with the conventional gastric ulcer treatment aided in faster recovery and proved to be beneficial in treating gastric ulcers.[2]

Another animal study conducted on rats found that aloe vera can treat induced gastric ulcers by improving tissue health and reducing inflammation of the tissue according to an article published in the World Journal of Gastroenterology.[3]

An animal study conducted on rats induced with gastric ulcers found on oral administration of aloe vera gel the number of ulcers and lesions in the gastric area decreased significantly.[4]

What does it mean? Administration of aloe vera orally increases the chance of treating gastric ulcers drastically.

Aloe vera is an anti-inflammatory agent

Aloe vera inhibits the production of prostaglandins which in high concentration causes inflammation and pain caused due to stomach ulcers. [5]

Manipal University, India, conducted an animal study on mice to find that aloe vera has an anti-inflammatory effect in carrageenin induced paw edema.[6]

Alimentary Pharmacology and Therapeutics journal published a research study done to decrease the symptoms of human colorectal mucosa, states the beneficial effects of aloe vera gel in decreasing inflammation by diminishing the number of prostaglandins secreted in the body that could help treat gastric ulcers.[7]

What does it mean? Aloe vera has active ingredients that aid in reducing inflammation and thus relieving the symptoms of a stomach or gastric ulcers.

Aloe vera is an antimicrobial agent

An in-vitro study conducted by the University of Yuzuncu Yil, Turkey, found aloe vera to effectively inhibit the growth of common microorganisms that can cause infections of the wounds left due to the gastric ulcer.[8]

Helicobacter pylori is a common causative agent of peptic ulcers. Aloe vera has been found to be antimicrobial in nature according to a research study published in the journal of Applied Microbiology and can efficiently inhibit the growth of the organism by causing cell lyses.[9]

According to a study published in the Journal of Pure and Applied Microbiology in the year 2017, aloe vera was proved to be effective against the most common pathogen E.coli.

The growth of the bacteria was inhibited by treating it with a low dose of 50 microgram/ml of ethanol extract of the aloe vera gel.[10]

What does it mean? Aloe vera has antimicrobial properties that can prevent the gastric ulcer caused due to Helicobacter pylori and protect against infections of the wound left by the ulcer.

According to a research study published in the Planta Medica journal, aloe vera gel acts as a strong antioxidant agent due to its efficient free radical species scavenging ability as well as the oxidizing agent scavenging ability.

This was found to promote wound healing as well.[11]

A 2003 study published in the Journal of Agricultural and Food Chemistry found aloe vera to possess strong antioxidant ability by acting as a free radical scavenger that could aid in preventing damage to the stomach lining.[12]

In a 2010 study conducted on rats induced with oxidative stress published in the NISCAIR periodicals, it was found that oral administration of aloe vera gel reduced the oxidative stress and acted as an antioxidant agent due to its inherent ability to scavenge harmful free radical species.[13]

Another study published in the Carbohydrate Polymers journal found that purified aloe vera polysaccharide prevents cell death caused due to oxidative stress and acts as a scavenger against harmful free radicals and oxidizing agents meaning it could act as a protective agent preventing harm to the stomach lining.[14]

Aloe vera acts as an analgesic

According to an animal study conducted on rats published in the Inflammation magazine, high doses of oral aloe vera supplements reduced formalin-induced pain in mice.[15]

A study conducted by the Department of Pharmacology, Medical College and Hospital, Kolkata, India, found that aloe vera gel supplements had an analgesic property.

The mice showed improved tolerance to pain when subjected to the writhing test subsequent to the administration of aloe vera.[16]

According to another animal study conducted in Tamil Nadu, India and published in the International Research Journal of Pharmacology, the whole leaf extract of aloe vera was found to appreciably diminish the pain in albino rats in a dose-dependent manner. It was also found to have significant anti-inflammatory property.[17] [18]

This study was conducted to analyse the effect of aloe vera juice on the patients with gastroesophageal reflux disease and also compare its effects with other antacids like omeprazole and ranitidine.

These patients were randomly given different treatments with Aloe vera syrup, omeprazole capsule or ranitidine tablet. The dosage of each medicine was defined:

The goal was to analyse the effect of aloe vera on patients showing the various symptoms of GERD.

How efficient aloe vera syrup is in fighting those symptoms and what relief could this cause to the patient suffering from GERD.

What were the results of the study?

The result of the study shows a significant reduction in the GERD symptoms at an interval of both 2 and 4 weeks of treatment in all the groups.

The aloe vera group showed a reduction in all the GERD symptoms at both 2 weeks and 4 weeks as compared with the baseline or untreated patients.

In the omeprazole and ranitidine group, the frequency of all assessed symptoms of GERD was also reduced significantly compared with the data recorded at the start.

A trend in the increased frequency of heartburn was seen in all the groups at 4th week as compared to that at 2nd week.

Adverse events resulting in two drop-outs each from omeprazole and ranitidine groups while no drop-out took place from the aloe vera group.

This indicates that the side effects from the omeprazole and ranitidine were intolerable to the patients as compared to the relief these chemicals give.

How does this occur?

It has been believed that GERD is a result of inflammation and oxidative stress. Hence aloe vera reducing the symptoms of GERD is due to its anti-oxidant and anti-inflammatory properties.

Aloe vera inhibits the activity of cyclooxygenase (an enzyme involved in stabilizing superoxide in the cell), has an ability to scavenge superoxide anions, reduce lipid peroxidation and up-regulates antioxidant enzymes; hence it acts as a potent antioxidant.

In a study it was found that aloe vera reduces oxidative damage to the liver due to various toxins like Carbon tetrachloride which can lead to hepatotoxicity.

Also, aloe vera suppress the expression of lipid-producing genes so insulin resistance improves and the toxic effect of lipid on liver get reduced. Since the liver is the most vital organ for digestion, so this hepatoprotectant nature of aloe vera can improve digestion and prevent heartburn (a major symptom of GERD).

It was also found out that aloe vera reduce the chances of leukocyte infiltration (movement of white blood cells outside the blood to the infected area) and TNF-alpha concentration in infection with Helicobacter pylori.

This is the indication of a strong antimicrobial effect of aloe vera against H.pylori (bacteria which has the tendency to damage the gastroesophageal lining) and hence the effect of gastric acid secretion on stomach lining gets reduced.

Aloe vera contains lectins which inhibit the aminopyrin uptake by acid-secreting cells of the stomach so acid secretion is reduced.

Hence, damage to oesophageal lining can be prevented.

Aloe vera leaf extracts contain a glycoprotein called aloctin A, which reduces the volume of gastric juice, acid and pepsin production in the stomach. It also inhibits the appearance of gastric lesions.

Also, the polymer fraction of aloe vera protects the gastric mucosa (outer layer of the stomach) against erosion.

This implies that aloe vera syrup provides easy, safe and effective treatment and reduce the frequency of GERD symptoms significantly.

So aloe vera should be given to the patients suffering from GERD on a daily basis to get relief from this disease naturally.

Also because aloe vera is less expensive, easily available and has many therapeutic activities other than treating GERD for example peptic ulcers, diabetes, etc. and also it does not cause any side effect.

Aloe vera syrup can be very beneficial for health if taken regularly.

Many aloe vera preparations are available in the market. The aloe vera gel can be directly consumed to treat ulcers. No specific dose is identified.

One can consume 1-2 tsp of fresh aloe vera gel daily. You can also consume 10-30 ml aloe vera juice daily as a part of other juices.
Please consult a health practitioner before consuming aloe vera.

Every ingredient in nature possesses some threats to the health if consumed inappropriately or in an excess amount.

The aloe vera gel can be allergic to a few people and thus the allergic reactions must be checked prior to use.

The aloe vera gel or latex, if consumed orally, can be unsafe for pregnant women.

Oral consumption of aloe vera gel or latex by children below the age of 12 years is considered unsafe and should be avoided.

Tracing the huge health benefits that aloe vera provides, it has proven to be very useful in the case of stomach ulcers.

Appropriate consumption of aloe vera can help in the reduction of the ulcer condition by altering the mucus content and reducing inflammation of the stomach wall and healing the ulcers.

The aloe vera is proven to be useful in stomach ulcer cases because of its anti-inflammatory property, healing effect, anti-bacterial effect and mucus stimulatory effect, the regulatory effect on gastric juices and cytoprotective effect.

It can be used as a very effective natural remedy for stomach ulcer patients.

READ THIS NEXT -
Chia Seeds for Acid Reflux
Aloe Vera Nutrition Profile
Why is Coconut Not Benefiting me ?
Benefits of Cocoa for Hypertension
4 Evidence-Based Benefits of Spirulina in COPD
How Cocoa Can Make Your Skin Youthful!