Chronic obstructive pulmonary disease (COPD) is a lifelong disease which obstructs the breathing pathway in the lungs.

It is basically a combination of two diseases – chronic bronchitis and emphysema. [1]

Chronic bronchitis is inflammation of bronchial tubes (the passage that carries air to lungs) and makes excessive mucus.

This leads to narrower of pathway and results in difficulty in breathing.

Emphysema is the damage of air sac which leads to its loss of stretching ability and hence results in short breaths. [2]

Chronic obstructive pulmonary disease (COPD) is characterized by chronic cough, shortness of breath (dyspnea), wheezing, and production of a lot of mucus (phlegm/sputum).

Other common symptoms are a frequent respiratory infection, blueness of lips (cyanosis) and fatigue.

The main cause of COPD is smoking. Prolong exposure to lung irritants, occupational dust, environmental pollution, childhood infection, and genetic factors also contribute to the incidence cases of COPD. [3]

Spirulina is a kind of blue-green algae (cyanobacteria) that is being used as food by humans and animals from a few decades.

Its biomass is used as a food source because it has high nutritional value, easy to grow and lesser time and money required to attain full growth,

The nutritional profile of Spirulina displays 60% of protein, rich in Vitamin B (thiamine and riboflavin), and also a good source of iron and manganese.

Nowadays it is marketed in the form of tablets, powder, and flakes.

There are two species of spirulina used for this purpose – Arthrospiraplatensis, and Arthropira maxima. [5]

Spirulina has the potential to prevent risk factors of cardiovascular, obesity and can also improve lipid profile. 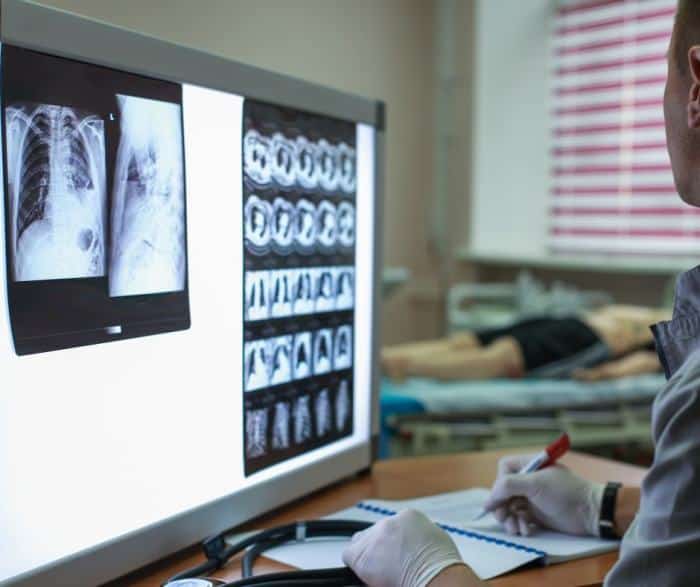 4 Evidence-Based Benefits of Spirulina in COPD

Here a few beneficial properties of spirulina that can benefit in COPD.

Cigarette smoke is a rich source of nicotine and soluble-stable aldehyde and ketone.

Nicotine component increases the risk of cancer and vascular disease by stimulating the sympathetic system.

These carbonyl compounds activate NADPH oxidase complexes in vascular tissues in the lungs and cause oxidative damage.

In animal studies and human cell cultures reveal that the phycocyanobilin (PhyCB), a phytochemical produced by cyanobacterium Spirulina has the ability to imitate bilirubin’s role.

Phycocyanobilin acts as an inhibitor of NADPH oxidation (oxidized form of NADPH is NADP+, is responsible for the generation of free radicals in immune cells) and prevents oxidative damage.

A combination of carvidilol and spirulina has the moderate pathogenic impact of smoking on users which fail to quit or refuse tobacco.

Drug carvidilol suppresses the sympathetic activity [6] (a part of the nervous system that stimulates the body's fight-or-flight response).

What does this Mean? This means that the combination of Spirulina with carvedilol can be used to protect smokers who fail to quit tobacco from the risk of the cardiovascular system.

In the pathogenesis of the chronic obstructive pulmonary disease (COPD) oxidative stress plays an important role.

Various forms of pulmonary hypertension have been reported due to the imbalance of oxidants.

A randomized control study states that consumption of spirulina minimum of 30 days is found to be effective in lowering the MDA. [8]

This study also showed an increase in superoxide dismutase (SOD) and catalase (CAT).

Spirulina is an anti-oxidant which has a performance-enhancing effect.

It has a dual purpose as an anti-oxidant agent.

It indirectly protects by inhibiting the oxidase enzyme system. It also reacts directly with free radicals and changes lipid peroxides to hydroxyl resins.

This reduction in oxidative stress is attributable to C-phycocyanin in spirulina.

What does this Mean? This means that spirulina can help to reduce oxidant imbalance which in turn reduces the risk of the chronic obstructive pulmonary disease (COPD).

These increase the secretion of inflammatory factors that cause inflammation when entering the lung.

Though it was found that spirulina doesn’t increase the plasma level of the α tochopherol.

Pre-clinical and clinical trials suggest that anti-oxidants can affect redox reaction and can stop the inflammatory response. [10]

In another study, it was found that treatment with spirulina reduced the expression of HDAC (histone deacetylases) in macrophages.

This treatment resulted in a decrease of synthesis of inflammatory factors.[11]

What does this Mean? This means that spirulina can reduce inflammation by a various mechanism of enhancing and inhibiting inflammatory factors, hence can be used in the treatment of pulmonary chronic obstructive disease.

As we are already aware that Spirulina is a nutraceutical food item with high vitamin and protein source.

It bears the properties of anti-oxidant and immunomodulatory which play a role in enhancing the human immune system.

It inhibits lipids peroxidation, scavenges free radicals and escalates the activity of superoxide dismutase and catalase.

In a vitro study, it was revealed that spirulina activates monocytes and T-cells which causes immunological function. [12]

In another study, spirulina enhanced the secretion of cytokines (IL-6 and TNF-α) from human B-cells.

It also showed that increased the natural killer cells which are also involved in the activation of the immune response. [13]

The enhanced immune system can reduce the risk of having chronic obstructive pulmonary disorder by releasing immune responses against pollutants, irritants, and bacterial-viral cells.

This doesn’t allow foreign elements to accumulate in tissues and trigger adverse reactions.

What does this Mean? This means that spirulina can activate the immune system which can ultimately protect the body from certain microbial infection and irritants.

Though there is not much evidence related to dose. The dose depends on the severity of the diseases and body mass, and age.

In a clinical trial, it was found that taking 500 mg tablet twice daily for a minimum of 30 days can effectively reduce the oxidative stress and can thus reduce the risk of chronic obstructive pulmonary disease (COPD).

The chronic obstructive pulmonary disorder is a disease which can be prevented by bringing a change in the behavior and attitude of the person.

Along with modification in diet and exercise, quitting smoking and reducing chemical exposure can prevent the incidence of the disease to a great extent.

Spirulina, having capabilities to reduce the oxidative stress, helps in reducing the inflammation.

When spirulina is used in combination with carvedilol it can help to prevent smoking and its effects.

With all these characteristics spirulina can help in chronic obstructing pulmonary disease. But further studies need to be done to confirm the hypothesis.

READ THIS NEXT -
Proven Benefits of Aloe Vera for Melanoma
Difference between Cinnamon Bark Oil and Cinnamon Leaf Oil
15 Amazing Superfoods for Memory
Cinnamon Helps In Blood Sugar Control And Can Prevent Pre-diabetes
What is Aloe Vera Drink and its Benefits?
Wheatgrass Nutritional Value