Sunburns are radiations that damage the skin on exposure to harmful UV radiations of the sun. It can occur in animals and humans and is characterized by symptoms like redness, pain, etc.

Excessive exposure to UV radiations is fatal. The risk of contracting sunburn has increased in the past few years due to depletion of the ozone layer.

Therefore, one must take care and special precautions before going out in the sun. Sunburns are commonly caused by exposure to direct sunlight. The sun is overhead from 10am-4pm, and this is the time one should avoid sun exposure and keep oneself covered.

For those visiting countries with high temperatures during summers may not be used to the climate and develop a sunburn easily. Visitors can start by adjusting to the extreme climate by exposing themselves to the sun for short durations like 10 to 15 minutes.

Treatment of sunburns often involves the application of sunscreens however many individuals are allergic to these.

Protection of the eyes in the sun is also very important.

Coconut oil is extracted from the coconut and grown mainly in the tropical countries like India. Coconut oil is used in a variety of natural beauty products.

It has great therapeutic properties that have the ability to penetrate deep into the skin on the application in small amounts as compared to other natural oils and commercially available creams and lotions.

It has no reported side effects or toxicity yet and therefore is extremely safe for use.

While it may sound very new to most of the readers, in tropical regions, coconut oil has been used as a suntan oil since long! It has been saving people of tropics from sunburns which get exposed to it so much. It was also part of suntan and sunburn oil in past, even today some brands have it as an ingredient.

Coconut oil can help in sunburns in various ways. Coconut oil is known to protect skin from UV radiations and their harmful effects. It can help in healing the skin damaged due to sunburns.  Further, coconut oil's anti-inflammatory properties help protect the irritated skin. It is an anti-oxidative and thus helps in reducing damage caused due to oxidation causing radiation. Lastly, Polyphenols present in coconut oil can play a beneficial role in reducing the risk of skin carcinogenesis in humans. 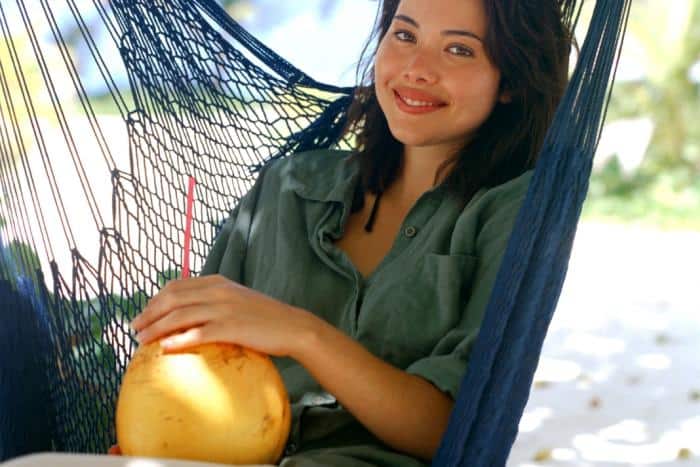 The benefits of coconut oil for sunburns are discussed in detail below.

Sunscreens widely used to protect the skin surface from sun rays. They are selected for use by an SPF factor. SPF stands for skin protection factor, and the concentration of the cream is applied accordingly.

Now, there is various side effects and toxicity caused by sunscreens, and thus they are not safe for daily use. On the other hand, coconut oil acts as a natural and effective sunscreen with a good SPF value.

According to a study published in Pharmacognosy Research in 2010 coconut oil was found to have the highest SPF value, 8 in comparison with other nonvolatile natural oils like mustard oil, castor oil, almond oil and sesame oil.

The study concluded that coconut oil could thus be used in the formulation of sunscreens due to a protective effect on the skin against the harmful UV radiations.

Olive oil was found to have an SPF of 8, and the effects of coconut oil as a sunscreen can be enhanced by mixing it with olive oil and applying the mixture to the affected skin surface.

Another study carried out by Korac et al. in 2010 reported that coconut oil could block 20% of the UV rays.

What does this mean?
Coconut oil has a good SPF value and can be used for the formulation of sunscreens. It is natural, safe and effective. Coconut oil has a protective effect on the skin and protects against harmful UV radiations.

2. It helps in wound healing

Coconut oil can be topically applied to wounds to fasten the healing process.

An experimental study carried out by Nevin et al. to determine the antioxidative status of wounds on the application of coconut oil on it for 10days.

Results of the study found that coconut oil increased the level of antioxidant enzymes, reduced glutathione and malondialdehyde levels by the 10th day. It also reduced oxidation of lipids.

These results ensured faster wound healing as compared to that of the control group models.

A study demonstrated how coconut oil alone as well as in combination with a topical cream containing silver sulphadiazine had positive effects on the burns. The results showed that coconut oil enhanced healing by the quicker formation of the epithelium damaged beneath the affected area.

What does this mean?
Coconut oil quickens the healing process by enhancing formation of the damaged epithelium layer.

3. It has anti-inflammatory properties

Inflammation is a major symptom of sunburn. It can be controlled by application of coconut oil on the burn.

Coconut oil is rich in polyphenols and phenolic acids that play an important role in healing.

A study published in reported that polyphenols play an important role in preventing UV radiation-induced inflammation along with skin protective effects and therefore can be used in the formulation of sunscreens.

The anti-inflammatory activity of coconut oil was tested on the human skin exposed to UV irradiation in a study conducted by Kim et al. in 2017.

According to the results of the study, the presence of polyphenols and fatty acid components in coconut oil prevent redness of the skin and protect the skin from UV-induced inflammation.

What does this mean?
Coconut oil contains large amounts of polyphenols and beneficial fatty acids that protect irradiated skin and prevent inflammation.

4. It has anti-oxidant defences

It is very important to include antioxidants in the diet to reduce susceptibility to sunburns. Oxidative stress can further damage the skin affected by sun rays.

Free radicals attack the layer beneath the skin and lead to skin ageing, sunburns, and skin cancer. Its balance in the body is imperative to maintaining skin health.

A study conducted by Saric et al. in 2016 reported that polyphenols are rich anti-oxidants. Studies conducted on humans \ for determining effects of polyphenols in both ways topically as well as when orally ingested against damage induced by UV radiations.

The study found that polyphenols were effective in protecting skin from oxidative damage in both ways and play an important role in maintaining skin health.

According to research published by Korac et al. 2011, phenolic acids are antioxidants that have a major role in fighting against reactive oxygen species that cause skin damage and negatively affect the skin.

The study also mentioned that polyphenols extracted from various plant products protect skin from exposure to UV radiations. Extracts from coconut oil were tested and coconut oil was found to block 20% UV rays.

What does this mean?
Coconut oil is rich in antioxidants, polyphenols that have a protective effect on the skin. They protect skin from oxidative damage and block harmful UV rays from damaging the skin.

5. It has photoprotective effect that prevents sunburns

It is well known that coconut oil is enriched with polyphenols. Various research studies have examined polyphenols for their protective effects on the skin affected by damage from UV radiations or other skin disorders.

A research study conducted by Nichols et al. in 2010 reported that polyphenols and phytochemicals have a photoprotective effect and their inclusion in the diet prevents oxidative stress, skin inflammation, and DNA damage.

The study conducted laboratory experiments on animal models and found that polyphenols protect the skin from UV radiations and prevent the risk of skin cancers too.

The study concluded that agents containing polyphenols could be used in sunscreens.

According to a study carried out by Afaq et al. in 2011, polyphenols play an important role in skin protection by reducing inflammation caused by UV radiations, DNA damage and other harmful effects of the sun on the skin.

The polyphenols protected the skin and were found useful in the management of skin cancer.

What does this mean?
Polyphenols present in coconut oil can play a beneficial role in protecting the skin from harmful UV radiations and reduce the risk of skin carcinogenesis in humans.

According to various skin experts if you plan to get exposed to the sun (say you are going for hiking, trekking, or to tropical regions) take care of the following:

Simple tips to use Coconut Oil for Skin Care

It is not that one needs to use coconut oil only when you need to avoid sunburn. If you are a regular user of coconut oil and take care of your diet you will not have to worry about sunburns anymore. Here are some tips:

So, rather than thinking coconut oil for just sunburn use it as a comprehensive skin care oil which when applied regularly will help you keep a soft, smooth and healthy skin naturally and economically!

Read: Why Coconut Oil is Great for Skin

Although no side effects of coconut oil have been observed till now, certain general precautions must be followed before incorporating it into the daily routine.

If any side effects are observed one should immediately stop its intake. Conduct a patch test before topical use of coconut oil.

It is better to use pure and organic coconut oil from a good brand which is free from additives and contaminations included to prolong shelf life.

Virgin coconut oil is preferred as it is unrefined and the nutrients in it are preserved as it is not subjected to chemical treatment.

Coconut oil is natural oil with miraculous properties. Its use in healing sunburns can help to a great extent.

The absence of side effects and toxicity on use of coconut oil is a big plus point as it can replace artificial chemicals used in the formulation of sunscreens.

It can be used as a natural sunscreen having greater effectivity and safety as compared to other natural oils.

Since dietary changes are also very important in preventing and healing sunburns including coconut oil enriched with anti-oxidants play a key role in the healing process.