Menopause is the condition where a woman’s menstrual cycle ceases after reaching a certain age, usually after 45 years. Sometimes it can be much earlier (in the 30s) or much later (in the 60s).

Menopause occurs when there is an absence of periods for one year.

It happens as a result of non-functioning of the ovaries, i.e. when the ovaries can no longer produce the female hormones, estrogen, and progesterone. It means that the woman cannot be pregnant anymore.

This process is a normal part of the life of every woman, but sometimes it may be caused by the surgical removal of the ovaries or premature ovarian failure due to chemotherapeutic drugs, autoimmune diseases or genetic disorders.

The process of menopause takes time and shows some changes or symptoms that indicate menopause prior.

The occurrence and intensity of these symptoms vary from woman to woman. Although menopause is not a disease, its symptoms may cause discomfort and require treatment.

Due to the termination of the production of female hormones menopause poses certain risks in the postmenopausal women.

There is an increased risk of cardiovascular diseases, osteoporosis, and urinary infections. Sometimes there may also be an elevated risk of ovarian cancer.

To manage the menopausal symptoms, often medications are prescribed. These may include hormonal therapy, antidepressants, medicines to prevent bone loss, etc.

However, hormonal therapy has many risks associated with it. It increases the risk of breast cancer, blood clots, and heart diseases.

The other medications also have side effects such as nausea, fatigue, weight gain, dry mouth, insomnia, muscle pain, etc.

In place of the medications, lifestyle changes can be very helpful in minimizing the risks associated with menopause.

Switching to a healthier diet, exercising regularly, quitting smoking and alcohol is important. For the management of the symptoms, natural alternatives can be very useful.

A natural product that has a wide applicability in menopause is the humble and very nutritious, coconut oil.

Coconut oil is the oil obtained from the kernels of the mature fruit of coconut palm or Cocos nucifera. The oil is extracted either from the raw coconut (cold-press) or the dried copra.

The coconut oil mainly consists of saturated and medium chain fatty acids such as lauric acid, myristic acid, palmitic acid and others. It also has a presence of vitamin E, polyphenols, and phytosterols.

The coconut oil has antioxidant, anti-inflammatory, antimicrobial, and immune supporting properties by virtue of its components. These properties make it beneficial in heart diseases, diabetes, wound healing and many other disorders.

The biological properties of coconut oil can be very useful in managing the symptoms and the risks associated with menopause. 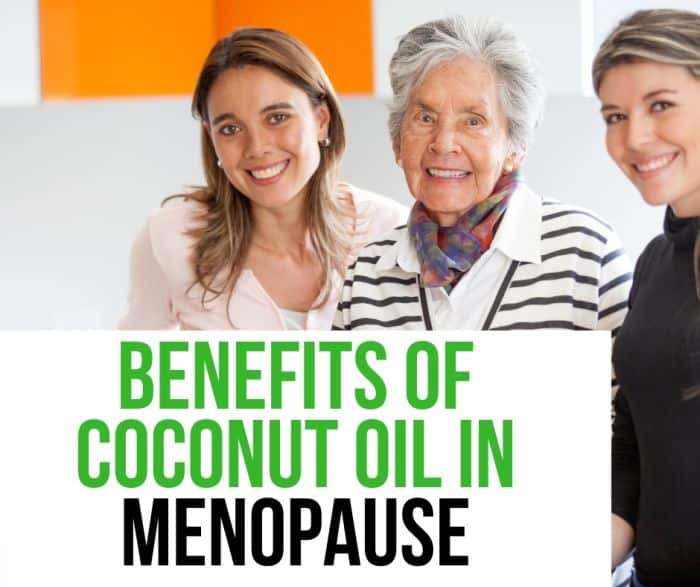 In the postmenopausal women, the risk of cardiovascular diseases is found to be prevalent and very high. It is a consequence of the deficiency of estrogen hormone after menopause which affects the cardiovascular functioning.

Lack of estrogen results in endothelial dysfunction, abnormal lipid profile, inflammation in the vascular system, changes in fat distribution in the body, etc.

Therefore, there is a risk of diabetes, insulin resistance, hypertension, stroke, and other cardiovascular problems.

Coconut oil in the diet is known for its cardioprotective benefits due to the action of its medium chain fatty acids.

Its major cardioprotective activity is through alteration in the lipid profile in the body. It lowers the level of the LDL (bad cholesterols) by preventing their oxidation through its antioxidant action.

It also increases the levels of HDL (good cholesterols) to improve the lipid profile. These help in preventing hypertension, dyslipidemia, and other cardiovascular problems.

It also improves the endothelial function by maintaining the nitric oxide (NO) level in the vascular system and thus prevents problems like hypertension.

In a study, it was found that in the pre-menopausal women who regularly included coconut oil in their diet had a better lipid profile. It suggested an improved lipid profile after menopause as well resulting in a reduced risk of cardiovascular diseases.

It means consumption of coconut oil by women pre- and post-menopause can reduce the risk of cardiovascular diseases in them caused by the deficiency of estrogen. Coconut oil improves the lipid profile and endothelial function and thus exhibits cardioprotection.

Coconut oil can address these problems and help to improve the metabolic health and promote weight loss.

It has been found to regulate lipid metabolism and promote bile acids formation. It results in a better lipid profile and thus, a better metabolic health.

Virgin coconut oil has been found to significantly improve the glucose metabolism to prevent insulin resistance through its antioxidant activity.

In women, coconut oil consumption in the diet has been found to promote belly fat loss.

The inclusion of coconut oil in the diet increases the weight loss. It occurs due to the enhancement of energy expenditure in the body by the action of medium chain triglycerides of the coconut oil.

Since the medium chain triglycerides do not adversely affect metabolic health, they are very helpful in weight management.

It means the regular intake of coconut oil can improve metabolic health and help in weight management. Coconut oil prevents the dysfunction of lipid and glucose metabolism and promotes weight loss as well.

The estrogen deficiency caused by menopause results in osteoporosis (reduction in bone density caused due to bone loss).

It occurs because of bone resorption (breakdown of bone cells) which is promoted by the absence of estrogen.

Estrogen is involved in various bone synthesis process and protects the bone against oxidative stress.

Virgin coconut oil has been found to prevent the postmenopausal osteoporosis. The antioxidant action of its polyphenols reduces oxidative stress in the bones by increasing the activity of antioxidant enzymes.

In a study, supplementation of virgin coconut oil in the postmenopausal model could reverse the effects of estrogen deficiency. Its strong antioxidant capacity prevented bone loss significantly.

Estrogen has an important role in brain function and influences many neuronal activities and protects the neurons from oxidative stress.

It also increases the risk of dementia and Alzheimer’s disease in them.

Coconut oil has the ability to improve the brain health as well. It is known to have antidepressant-like effects by altering the neurotransmitters.

It also protects the neurons from oxidative damage by its antioxidant action.

Coconut oil can prevent the development of Alzheimer’s disease (caused by amyloid-β peptide deposition ). It attenuates the abnormalities caused in neurons by amyloid-β.

Coconut oil in the diet has been found to prevent the development of Alzheimer’s disease and memory impairment.

It means coconut oil consumption can help protect the brain from functional abnormalities caused by estrogen deficiency. It can also prevent the development of brain disorders like Alzheimer’s disease in the post-menopausal women.

Coconut oil is regarded as safe in the dietary amounts. However, taking certain precautions is necessary to avoid any adversity related to its use.

1. Coconut oil may be allergic.
Those who are prone to food allergies can be allergic to coconut oil as well. Coconut oil consumption by them may trigger an allergic reaction in their body to cause hives, shortness of breath, redness, itching, etc.

2. Coconut oil’s excessive intake may cause diarrhea.
Coconut oil consumption in high amounts may irritate the stomach and thus result in diarrhea.

4. Repeated heating of coconut oil can be very harmful.
Coconut oil is safe for cooking on high heat but re-heating it, again and again, can turn some of its constituents into a carcinogen (cancer-causing agent). Therefore, repeated use of coconut oil for cooking should be avoided.

Coconut oil has great therapeutic benefits in menopausal women. It is beneficial in various risks associated with the menopause.

The consumption of coconut oil can help protect these women from cardiovascular risks, brain disorders, and osteoporosis.

It also helps in improving the metabolic health and helps in the weight management of these women.

The strong antioxidant activity of coconut oil ameliorates the damages caused by oxidative stress and compensates for the estrogen deficiency indirectly.

In conclusion, coconut oil is very useful in preventing the risks associated with menopause in women.