IBD is a collection of severe gastrointestinal symptoms like diarrhoea, abdominal pain and bleeding. The chronic conditions of IBD include two chronic inflammatory disease of gastrointestinal tract.

The major symptoms of the disease are:

The factors responsible for IBD:

IBD affect about one in 200 people in western countries with rising incidence in developing countries also. This disease may initially start with minor abdominal pain can have a lifetime of severe symptoms, affecting the well being and life style of individual suffering from the disease.It may cause a high risk of bowel cancer.

The medical treatments for IBD are not very successful and often surgery is the only option left. New ways of treating and managing the disease are being researched upon.

Manuka honey is a special kind of honey which honey bees made by using the nectar from wild Manuka trees related to Leptospermum species. These Manuka trees are native to New Zealand and Australia.

Manuka honey has many special properties which are absent in other honey. It is this special Manuka factor of Manuka honey which generates the interest of many scientists. Now Manuka honey is the most widely studied form of honey for its various medicinal uses.

The most common cause of IBD is inflammation due to toxic products and microorganisms. Most common microorganisms involved in causing IBD are: Mycobacterium avium subspecies paratuberculosis(MAP), Salmonella, Campylobacter,E.coli, Bacteriodes, Clostridium,Fusobacterium, Yersinia enterocolitica, Collinsella, Ruminococcus.

And Manuka honey has antibacterial activity due to which the growth of these bacteria can be controlled in the gut.

Since IBD is caused by the increase in the harmful microbes in the gut the antibacterial property of the Manuka honey could be very beneficial in treating the IBD. Manuka honey has a broad spectrum antibacterial activity on the bacteria involved in food spoilage and gastric ulcers.

In a study conducted on four different type of honey to test their effect on the growth of various microbes it was found that Manuka honey show maximum activity against microbes.

What does this mean?
This means that antimicrobial nature of manuka honey can help in restoring the gut natural micro biota which got disturbed during IBD by killing harmful microbes.

Clostridium difficile is considered as leading cause of diarrhea and IBD. It affect the individual with IBD by triggering disease flares and sustaining activity and is highly resistant to antibiotics so can’t be eliminated easily.

In a study conducted on three different strains of this bacteria it was found that Manuka honey have significant bacteriocidal activity against this bacteria. It was observed that on increasing Manuka honey concentration the sensitivity of the bacteria increases and no growth was seen even after 7 days.

In another study the susceptibility of C.difficile was tested on its biofilm forming ability. Biofilm formation is a mechanism of bacteria to spread infection and also prevent itself from toxic compound. It was found that Manuka honey has antibacterial activity against it and inhibits biofilm formed by C.difficile .

What does this mean?
Clostridium is most harmful bacteria of all for IBD and can’t be eliminated easily. Manuka honey has the potential to kill the bacteria and prevent its growth further in gut. 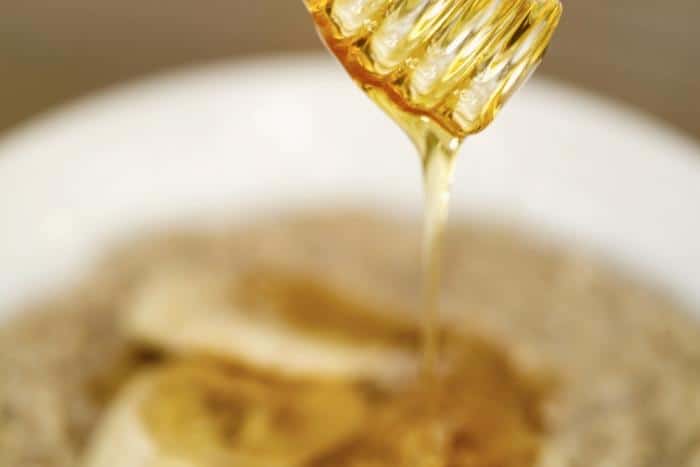 3.It serves as an antioxidant

Free radical oxides and superoxides are highly toxic for the body as they are involve in damage of DNA, proteins and lipids present in cells and tissues. And these cause oxidative stress in various gastrointestinal disorders. So they need to be eliminated as early as they got produce in the stomach.

Antioxidants are compounds which help in degradation of the oxides free radicals. And Manuka honey possesses high antioxidant property.

The methylglyoxal present in the Manuka honey act as potent superoxide scavenger and reduce oxidants in the cell.
In a study conducted on middle-aged rats to determine the effect of Manuka honey on their oxidative status.

A reduction in DNA damage was found. Also there was reduction in the level of malondialdehyde and glutathione peroxidase. This shows the high antioxidant activity of Manuka.

What does this mean?
This means that manuka honey contain various antioxidants which eliminates the toxic substances produced by the bacteria and hence maintain the healthy gut.

4.It reduces inflammation in IBD

Inflammation is the major reason of the onset of IBD. It is due to high level of toxins in gut which cause alteration in the activity of immune system and immune components got over activated. This over activation of immune system is responsible for gastric ulcers, fever and abdominal pain in the individual suffering from IBD.

A study was conducted to assess the effect of manuka honey on experimentally induced inflammatory bowel disease.

After completion of treatment it was found that different doses of manuka honey provides significant protection against experimentally induced colonic damage. The inflammation reduced significantly with reduction in other parameters of IBD.

In another study conducted against gastric ulcers in animal model it was found that use of Manuka honey decreases the gastric mucosal malondialdehyde and plasma TNF-alpha, IL-1beta, and IL-6 concentrations .

What does this mean?
IBD mainly caused due to inflammation and manuka honey have anti-inflammatory properties which can help control the inflammation.

Dosage of Manuka Honey In IBD

Manuka honey can be consumed by either dissolving it in cold or lukewarm water or directly 1 teaspoon twice a day.

Manuka honey has very beneficial effect in the IBD. But it can also induce similar conditions in certain cases due to its high methylglyoxal content. It has been proved that methylglyoxal is a potent toxic metabolite which is produced by harmful bacteria present in intestine.

In a animal study, various IBS (irritable bowel syndrome – lower level of IBD) like symptoms were observed when animal models were administered with methylglyoxal (not manuka honey). Diarrhea, hyper sensitivity, depression was observed.

The methylglyoxal content of Manuka honey is found to be 38-761mg/kg which is 100 times more than the conventional honey . Therefore start with small doses and increase dose gradually. If you experience worsening of symptoms then avoid using Manuka honey.

While in normal healthy person Manuka honey seems to cause no adverse effects so they can consume it on regular basis to get its benefits. While certain people might be allergic to honey they must take precautions while consuming honey.
A few precautions to be noted about manuka honey include:

Manuka honey seems to have no adverse effect on healthy individuals. So it can be consumed on regular basis by any individual keeping in mind the precautions mentioned above.

It has been evident from the studies conducted on animal models by various scientists that Manuka honey helps in fighting various symptoms of IBD due to its anti-inflammatory, anti-microbial and anti-oxidant activity.

It helps in restoring natural microbiota of the gut by its action on harmful microbes. Start with small doses to ascertain whether manuka honey benefits you in IBD without causing side effects.