As the name suggests, allergic rhinitis is a result of an allergy.

Allergy to dust, pollen, mold can cause rhinitis (inflammation of the nose).

The symptoms of allergic rhinitis patient are similar to cold symptoms [1].

These symptoms can be mild to severe. It is more common in children and adolescents. It is a global health problem.

The immune system of the affected overreacts to an allergen (allergy causing agent) which one inhales.

The immune cells release inflammatory mediators like histamine which is responsible for running nose and watery nose.

Different medications are recommended for treating allergic rhinitis like antihistamines, decongestants, nasal corticosteroids and nutrition supplements like herbs and Spirulina.

Spirulina is blue-green algae or cyanobacteria. It is also known as Arthrospira. The most common one is Spirulinaplatensis, which is famous for its nutritional value worldwide.

It is rich in proteins, vitamin B complex, copper, iron, magnesium, potassium, and manganese.

It also contains polyunsaturated fatty acids or omega‒3s and therapeutic agent, phycocyanin. It mainly has antioxidant and anti-inflammatory properties.

Spirulina has nutritional as well as several health benefits. It may be beneficial for the treatment of allergic rhinitis in many ways. 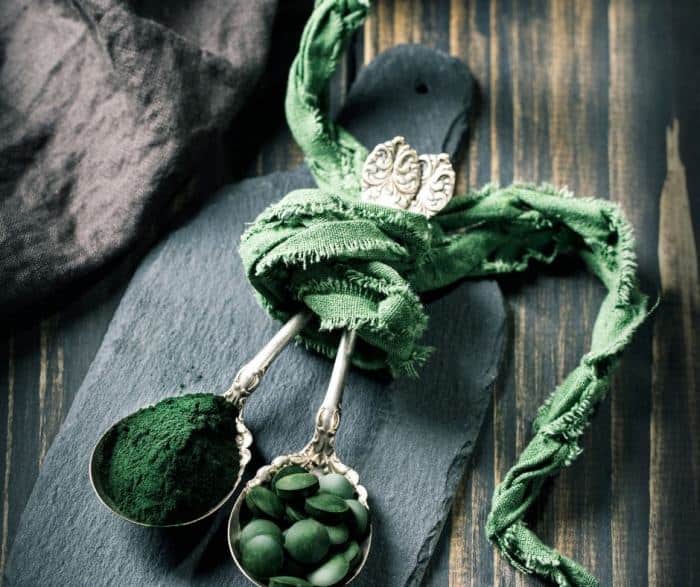 1. It has Anti-Inflammatory Property

Phycocyanin, a prominent pigment present in Spirulina has been reported to have anti-inflammatory property.

It has an antioxidant effect which scavenges free radicals thereby inhibiting inflammation.

What does this Mean? Spirulina prevents painful symptoms of nose inflammation by inhibiting the release of mediators of inflammation or swelling.

2. It Fights Allergy by Modulating the Immune System

It modulates the immune system by modifying the release of cytokines (inflammatory mediators). The cytokines such as IL‒4, INF‒γ regulate immunoglobulin‒E‒mediated allergy.

In a study, Spirulina when administered in patients with allergic rhinitis at 2g/day significantly reduced the level of cytokines by 34% thereby regulating allergy in the patient [4].

It also modulates the T cell profile (immune cell) of patients of allergic rhinitis by suppressing its expression hence, inhibiting the release of cytokines.

The level of histamines was also found to be low in the rat model [5].

What does this Mean? The intake of Spirulina controls the allergic symptoms by manipulating the immune system of the patient such that allergic reactions are limited.

Anaphylaxis is a life-threatening reaction to allergens (allergy-causing agents).

In rare cases, the immune system of patients of allergic rhinitis overreact and they can suffer anaphylactic shock.

Spirulina has been shown to inhibit the mast cells which are the key immune cells causing allergy [6].

This regulates allergic reaction in the patient so that further complications don’t develop.

What does this Mean? This signifies that the consumption of Spirulina is preventive for extreme cases of allergic reactions. As anaphylactic reaction can cause sudden death, Spirulina is a lifesaver in these cases as it inhibits these toxic allergy reactions in the patient and stabilizes the condition.

4. It Overall Relieves the Symptoms of Congestion

Consumption of Spirulina has been shown to significantly improve the symptoms of allergic rhinitis such as nasal discharge, sneezing, congestion of nose and itching [7].

The mechanism of the same is not clear yet but it has been found to be clinically effective.

What does this Mean? This means that Spirulina can be an alternative therapy or medication for allergic rhinitis as it alleviates the symptoms in the diseased.

5. It has Nutritive Value

Spirulina is 50‒70% protein by weight. It is also rich in vitamins and minerals such as vitamin B complex, copper, iron, manganese, etc.

The intake of vitamins especially vitamin D is known to be protective for allergic rhinitis [8].

Spirulina’s intake provides the essential polyunsaturated fatty acids like omega‒3s.Consumption of omega‒3s have been found to reduce the cough and wheezing symptoms in allergic patients [9].

Omega‒3 fatty acids may reduce airway inflammation [10]. Thus, it contains all the basic essential nutrients required by the body.

It thus acts as an energy booster.

What does this Mean? Spirulina is regarded as a superfood due to its high nutritional value. Dietary intake of Spirulina generally prevents diseases by boosting energy as well as the immune system.

The constituents of Spirulina such as polysaccharides, essential fats are easily absorbed by cells which help in fast release of energy.

This is the reason it is called the food of the future.

To some extent, Spirulina helps in preventing chronic fatigue.

What does this Mean? Intake of Spirulina also relieves the secondary symptoms like fatigue and maintains strength in the patient's body.

The dose of Spirulina should not exceed 5g on a daily basis.

The healthcare professional must be consulted before intake of Spirulina as a dietary supplement [13].

Generally, the consumption of Spirulina is considered safe.

Pregnant women and breastfeeding mothers must consult the doctor before its consumption.

It is known to cause stomach problems like constipation in some of the consumers.

The patients with autoimmune disorders like rheumatoid arthritis, multiple sclerosis, etc. should avoid the intake of Spirulina.

People suffering from phenylketonuria must also avoid its consumption.

Spirulina is a superfood with a lot of nutritional benefits as well as health benefits. It is a suggested alternative medicine or herbal therapy for allergic rhinitis.

The therapeutic ingredients of Spirulina such as phycocyanins, flavonoids, vitamins, protein, and other minerals make it a potential nutraceutical.

It has an anti-inflammatory property and also has the capacity to modulate the immune system.

The positive effect of Spirulina on allergic rhinitis is that it helps to fight allergy by inhibiting the release of histamines from mast cells.

It inhibits the inflammation of sinuses thereby preventing nose congestion.

Most importantly, Spirulina is anti‒anaphylactic and hence, it lowers the risk of sudden death that can be caused in extreme cases by the overreaction of the immune system when exposed to an allergen.

It is a high protein diet and rich in essential nutrients. Thus, Spirulina is beneficial in overall health management.

READ THIS NEXT -
Cooking with Cinnamon
Chia Seeds for Candida
How to Open a Coconut
Kelp vs Spinach - Which is Better?