Aloe vera is a plant species that grows wild in the hot and humid weather conditions and is mainly cultivated for the agricultural, decorative and medicinal purposes.

It is a natural product known for its health, beauty, medicinal and skincare properties.

It is called as “The Plant of Immortality” and is used today for various purposes in dermatology.

Yeast is a fungus that lives almost everywhere including our body, which can multiply and cause infection.

Our body’s immune system keeps the yeast under control but during sickness or consumption of antibiotics, the immune system becomes weak and the yeast now can multiply and cause infection.

Yeast infection occurs in various parts of the body in different ways. It can occur in the mouth causing white patches - Thrush, which can spread down to the esophagus - Candida esophagitis, it can occur in women in the vagina – Vaginitis, it can cause itching and rashes on the skin and the most life-threatening being the yeast infection in the bloodstream- Candidemia .

There are many medications available that are used to provide quick relief from the infection, but the herbal methods are always proven to be more effective, long-lasting and without any side effects.

Please feel free to use the Table of Contents below to jump to the relevant section. 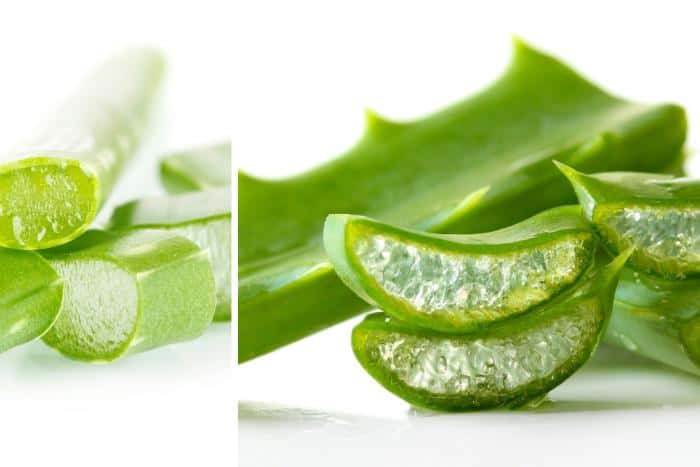 These properties are discussed in detail below -

In a 2010 animal study published in the Archives of Pharmacal Research, Aloe vera was found to have active ingredients such as aloctin A and acemannan which inhibited the growth of the fungi Candida albicans, which is the causative agent for yeast infections.

In an in-vitro study conducted in Tamil Nadu, India, 250 micrograms per ml of aloe vera extract was found to effectively inhibit the growth of Candida albicans.

It was found to be a dose-dependent reaction and with an increase in the dose of aloe vera extract, the fungicidal effect was found to improve.[2]

Similarly, studies carried out by the Department of Oral Medicine and Radiology, Chhattisgarh, India and also by the University of Delhi, India, found that Aloe vera had promising antifungal activity against Candida albicans at high concentrations.[3] [4]

What does it mean? Aloe vera has antifungal properties which can effectively combat a yeast infection.

According to an animal study published in the Central European Journal of Immunology, on the administration of a high dose of oral aloe gel supplement daily for a period of 14-21 days, the antibody production and chemokinetic activity of the mice increased significantly.[5]

Aloe vera was found to increase the activity of macrophages for infection against Candida albicans by a study published in the journal of Immunopharmacology and Immunotoxicology.[6]

Aloe vera extract was injected into rabbits in an animal study and the concentrations of their immunoglobulin production were thereafter noted on a regular basis.

It was found that the immunoglobulin production of CD4+ and CD8+ increased significantly after the administration of aloe vera indicating that it stimulates the humoral and cell-mediated immune system in a positive way making it useful for fighting infections.[7]

According to a study published in the Journal of Inflammo Pharmacology in 2012, aloe vera was found to increase the humoral immune response in mice.[8]

What does it mean? Aloe vera stimulates the immune system in a positive way by stimulating the production of antibodies and macrophages which would help in fighting the fungal infection more efficiently.

According to a study published in the Journal of American Podiatric Medical Association, Aloe vera was found to reduce inflammation on topical application of aloe vera gel.

In another study published by the Journal of American Podiatric Medical Association conducted on mice, edemas against various common irritants were found to subside on the application of aloe vera gel.[10]

Aloe vera inhibits the production of prostaglandins which in high concentration causes inflammation and pain which are a few symptoms of yeast infections. [11]

What does it mean? Aloe reduces inflammation by reducing the production of Aloe vera has the inherent property to reduce inflammation caused by yeast infections.

In a study published by the Journal “Planta Medica”, aloe vera was found to have active ingredients such as isorabaichromone and aloesin that act as free radical and superoxide scavengers that can damage the sensitive tissues of the body and further affect the infected area. Thus ale vera acts as an antioxidant agent.[12]

According to a human study conducted in India, aloe vera possesses anthraquinones which acts as an antioxidant agent preventing the damage free radicals cause to the affected tissue.[13]

What does it mean? Aloe vera contains active ingredients that act as scavengers for free radicals preventing oxidative stress-induced damage to the affected tissue of the body.

According to an animal study conducted on rats published in the Inflammation magazine, high doses of oral aloe vera supplements reduced formalin-induced pain in mice.[14]

In another animal study conducted in Tamil Nadu, India and published in the International Research Journal of Pharmacology, the whole leaf extract of aloe vera was found to significantly decrease the pain in albino rats in a dose-dependent manner. It was also found to have significant anti-inflammatory properties. [15] [16]

A study conducted by the Department of Pharmacology, Medical College and Hospital, Kolkata, India, found that aloe vera gel supplements had an analgesic or pain-relieving property.

The mice showed improved tolerance to pain when subjected to the writhing test after the administration of aloe vera.[17]

What does it mean? Aloe vera has an analgesic property which helps in relieving pain caused due to yeast infections.

The dosage of aloe vera for yeast infection depends on the area of infection.

An allergic reaction can be shown due to Anthroquinones, thus people allergic to plants like garlic, tulips, and onions, should avoid the use of aloe vera.

The laxative effect of aloe vera can also cause electrolyte imbalance.

Oral consumption of aloe vera should also be avoided by breastfeeding and pregnant women as it may stimulate uterine contractions and lead to miscarriage and gastrointestinal discomfort in nursing infants.

Aloe vera has a lot of effective uses for the treatment of yeast infection. It can be used for treating the infection because of its antibacterial, antifungal and antiviral properties.

Thus this natural product acts as an important resource in traditional medicine and can be used for the prevention and treatment of yeast infection.