Gastric ulcer or peptic ulcer is commonly known as stomach ulcer refers to painful ulcers or sores in the lining of the stomach or frontal (upper) part of the small intestine called duodenum.

It is a result of an imbalance of digestive fluids in the stomach and duodenum.

Most of the gastric ulcers are caused by bacterial infection of Helicobacter pylori. In rare cases, tumors in the stomach called as Zollinger‒Ellison syndrome develops peptic ulcers.

Some of the factors that increase the risk of gastric ulcers are an excessive intake of nonsteroidal anti-inflammatory medicines or painkillers, excess acid production from cells lining the stomach or excessive smoking and drinking alcohol.

The most common symptom is a burning stomach pain which begins at night or between the intake of meals.

Treatment for peptic ulcer is the use of antacids and antibiotics to get rid of H.pylori infection.

Manuka honey is obtained from the nectar of a bush named Manuka, native to New Zealand.

The main components of Manuka honey are hydrogen peroxide, methylglyoxal and leptosperin.

These are the active ingredients with health benefits.

The therapeutic potential of Manuka honey is determined by Unique Manuka Factor (UMF). Higher the content of methylglyoxal, higher is the UMF.

Thanks to its anti-inflammatory, antiulcer properties, Manuka Honey help prevent stomach Ulcers. Being an antimicrobial, it specifically inhibits the growth of Helicobacter pylori, a causative agent of gastric ulcer. 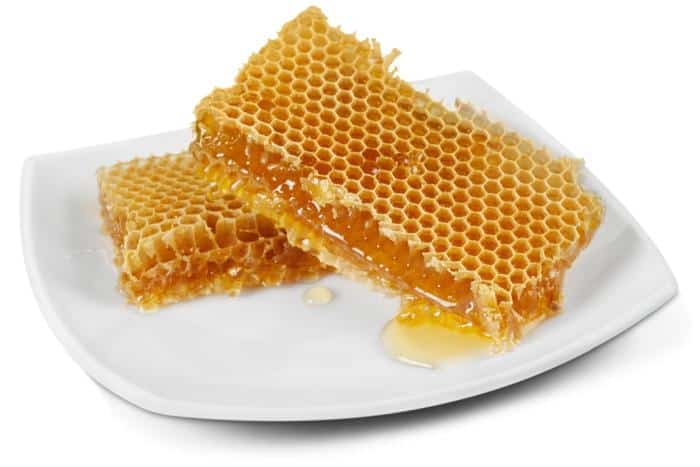 Studies have found that five isolates of H. pylori from gastric ulcers were sensitive to 20% (v/v) solution of Manuka honey. The antibacterial activity is mainly due to hydrogen peroxide. It was found that the minimum concentration of honey to inhibit bacterial growth is 5% (v/v).

Moreover, pH of honey is low enough (3.2‒4.5) to inhibit the growth of bacteria. High sugar content and low moisture of honey are other factors which are bactericidal. The antibacterial property of Manuka honey has been widely researched and is renowned worldwide.

What does this mean?
Manuka honey acts specifically against the causative agent of gastric ulcer, Helicobacterpylori. Even at low concentrations it is effective. Hydrogen peroxide is the key contributor to antibacterial activity. UMF 10‒14 is beneficial in maintaining bacterial balance in the intestine.

2. It has antiulcer potential

Gastric ulcer is one of the common diseases affecting humans. Manuka honey has gastroprotective effects.

Manuka honey has been found to significantly decrease ulcer index and prevents the lining of the stomach from getting damaged.

Ulcer index determines the propensity of the gastric ulcer for eg. A value of 0 denotes no ulcer, a value of 2 depicts deep ulcer etc.

Manuka honey also significantly increases the level of non‒enzymatic as well as enzymatic antioxidants such as gastric nitric oxide, glutathione (an antioxidant) and superoxide dismutase (an enzyme that catalyzes the destruction of free radicals).

This exerts antiulcer effects in stomach and intestine.

What does this mean?
Manuka honey is helpful to alleviate the symptoms of gastric ulcer by exerting antiulcer effects. This means that manuka honey can be preventive against gastric ulcers.

3. It has anti-inflammatory activity

Gastric ulcers cause an inflammatory response which leads to the activation of neutrophils (major cells involved in inflammation) and an imbalance in oxidant/antioxidant ratio.

What does this mean?
Inflammation induced by the infection of H. pylori is common in patients of gastric ulcer. In worst cases it can cause gastric ulcer. Manuka honey has been found to alleviate symptoms of inflammation by inhibiting the factors that initiate inflammation.

4. It has an immunomodulatory effect

Manuka honey inhibits NF‒ĸB (a protein complex that controls transcription i.e. formation of RNA from DNA) and AP‒1 (transcription factor) DNA binding activity which is induced by the infection of H. pylori.

By modulating the immune system, manuka honey prevents damage to stomach and duodenum thereby, inhibiting the changes in the immune system of the affected, induced by the growth of H. pylori.

Maximum inhibition was observed at a concentration of 20%.

What does this mean?
Manuka honey has the potential to avert the changes in immune system induced by infection of H. pylori. This is an effective mechanism to control gastric ulcers.

5. It is a urease inhibitor

Urease hydrolyses urea to ammonia and carbonic acid which is responsible for the proliferation of the bacterium and elicits an immune response.

What does this mean?
Manuka honey inhibits the action of pathogenic enzyme, urease which plays a significant role in gastric ulcer prevention.

Acting as inhibitor of urease, manuka honey serves as the foundation for development of urease inhibitors in pharnaceuticals.

Manuka honey can be taken orally or applied topically. One to two teaspoons of manuka honey is recommended on daily basis to increase immunity.

As such, there is no dose restriction for manuka honey but patients of diabetes should take honey in moderation.

People who are allergic to pollen must avoid manuka, honey. Pregnant women and breastfeeding mothers must consult the doctor regarding the appropriate dosage.

A few precautions to be noted about manuka honey include:

Manuka honey has a lot of therapeutic potentials.

Studies have shown that it can be preventive for gastric ulcer. It has anti-inflammatory, antiulcer properties.

Being antimicrobial, it specifically inhibits the growth of Helicobacter pylori, a causative agent of gastric ulcer.

In rare cases, patients of gastric ulcer develop gastric cancer. Manuka honey is antiproliferative and hence has an antitumor effect.

The key components of manuka honey, hydrogen peroxide and methylglyoxal are antibacterial.