Hypertension, also known as high blood pressure, refers to a disorder where blood hits the walls of the arteries with force greater than normal.

It can cause severe damage to an individual’s health.

It increases the risk to conditions such as heart attack, stroke, and other heart problems.

Therefore, it needs to be regularly monitored as we age and be given the required attention if it goes beyond the normal levels (120/80-140/90).

Cocoa consumption has often seen to be accompanied with the relaxation of blood vessels and easier blood circulation.

These are just some of the ways that it reduces the risk of cardiovascular disease.

Before we get to the benefits of cocoa for hypertension, let’s understand our superfood cocoa better. [1]

In addition to its excellent flavor, it offers several health benefits. The most potent of these are its anti-inflammatory and antioxidant effects.

It has been used throughout history to heal a variety of ailments. The Incas used to refer to it as ‘the drink of the gods.' [2]

Cocoa has a unique healing system that helps it monitor any different types of cellular activities.

Increasing scientific evidence is indicative of its ability to act on damaged or aging blood cells and repair them.

Some of the benefits of using cocoa to obtain healthy blood pressure have been listed as follows: 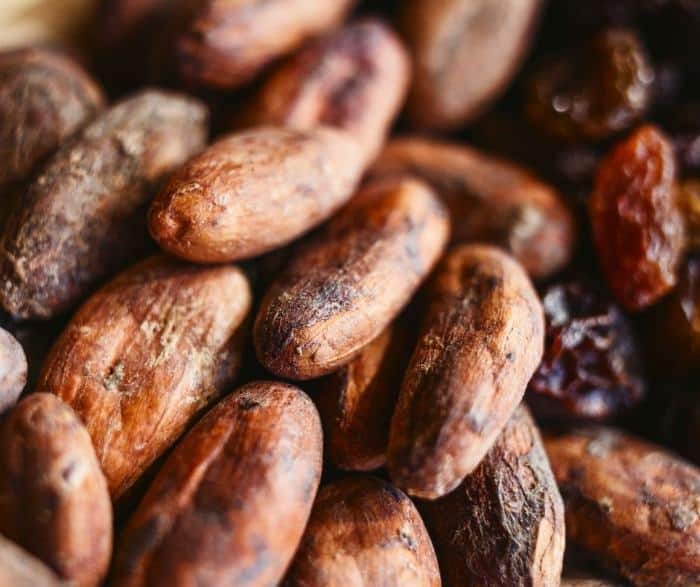 Lowering of blood pressure is essential to preventing the development of heart problems. To achieve this, blood flow rates need to be monitored.

Through detailed data collection and analysis, they saw that the flavanols in cocoa were capable of inducing vasodilation.

Their study also revealed that acute consumption (around two weeks) showed optimal results while the extent to which long term cocoa consumption could aid blood pressure problems was uncertain. [3]

What does this Mean? The flavanols in cocoa possess blood pressure lowering properties. It monitors blood flow enabling it a useful to treat hypertension.

Studies have indicated that cocoa plays an active role in regulating metabolic markers related to blood flow. This is primarily due to the flavanols present in it.

The study attempted to compare the effects of dark and white chocolate on hypertensive individuals.

Over the period of the survey, it was discovered that the dark chocolate (cocoa containing) not only lowered blood pressure but also upregulated metabolic activity such as insulin sensitivity while protecting the blood vessels from damage. [4]

What does this Mean? Cocoa could be potentially used as to stimulate steady blood flow while strengthening the blood vessels.

In 2008, the Journal of Nutrition published a study which was based on the use of cocoa in a randomized control trial for the treatment of blood pressure.

It was carried out using a mix of male and female subjects.

The period of which the subjects were studied ranged over 15 days.

Through analysis of several parameters, they determined that cocoa could curb the negative changes caused by hypertension on artery walls.

The mechanism behind this was that the compound enhanced the levels of nitric oxide in the cells lining the arteries.

This protected the arteries from damage and allowed easier blood flow. [5]

What does this Mean? This study showed that the detrimental morphological effects brought about by high blood pressure were significantly brought down through the administration of cocoa.

Endothelial dysfunction is a common cardiovascular risk associated with hypertension.

Cocoa has been observed to aid this condition and in turn, reduce mortalities associated with it. [6]

Scientists aiming to understand the biological mechanism behind this saw that consumption of cocoa is coupled with an increase in the concentration of this compound epicatechin in human plasma.

It is an excellent antioxidant. It drives away harmful free radicles residing in the blood vessels while bolstering the endothelial lining. [7]

What does this Mean? Through the administration of cocoa, blood pressure can be brought down through improved endothelial function.

Thrombosis is the process by which blood clots occur in veins, this obstructs blood flow, causing pressure build up around the artery walls.

The main cause of this is cholesterol accumulation in the arteries which takes place through various means. One of these is LDL oxidation.

When Wan Y and colleagues evaluated the effects of cocoa consumption on this phenomenon, they got highly positive results.

As per their experiment, the polyphenolic compounds in cocoa did not allow for LDL oxidation to take place efficiently and slowed down its rate significantly.

This corresponded to lowering cholesterol and in turn less blood pressure risks. [8]

What does this Mean? Cocoa does not allow cholesterol to build up in the arteries; this prevents thrombosis and drives away other risk factors for cardiovascular disease.

Arteriosclerosis is a condition wherein arteries gradually harden and lose its ability to pump blood efficiently. Over time, this may lead to the development of hypertension.

Researchers have conducted extensive human based studies on cocoa to conclude its highly potent anti-arteriosclerotic effects.

One such clinical trial showed that cocoa could aid with blood flow and reduce artery stiffness when tested in a group of overweight adults for an 8-week period. [9]

What does this Mean? Cocoa could be potentially used as to eradicate signs of stiffness which causes the resistance of blood flow through arteries.

Vascular reactivity refers mainly to the process by which blood flow through vessels is modulated by suitable variations in blood vessel dimensions.

In hypertensive cases, the vessel reactivity reduces gradually. Cocoa provides a means to boost this activity.

As per Current Hypertension Reports, the flavonoids in cocoa can lower cell adhesion and therefore prevent cholesterol accumulation and lipid metabolism.

This, in turn, results in more improved blood vessel structure and reactivity. [10]

What does this Mean? Since the flavonoid compounds present in cocoa are capable lowering lipids and cholesterol, it has potential to be used for improving vascular reactivity.

8. Cocoa is an Effective Nutraceutical for Blood Pressure Control

Natural products are used for disease treatment as they offer the least side effects and have several beneficial chemicals.

In the case of cocoa, its benefits can be attributed to its polyphenols and flavonoids.

These make it an excellent anti-oxidant and anti-inflammatory agent and are believed to provide nutritional benefits at par with vitamins and minerals in fruits and vegetables.

According to the most recent edition of Food and Function, it effectively reduces the risk of heart disease by lowering stress and enabling steady blood flow and is one of the bioactive agents to look out for in the coming years. [11]

What does this Mean? The polyphenols and flavonoids in cocoa have great nutritional benefits and can help reduce the risk of cardiovascular disease.

Dosage of Cocoa For Hypertension

The main goal behind the consumption of cocoa or dark chocolate is to optimize some flavonols taken in by the body. Further research is required to determine the optimal dose.

However, at present, 25-40g of dark chocolate containing 85% cocoa is recommended. Milk and white chocolate do not act as suitable supplements. [12]

Scientists are still researching the full scope and outcomes of uses of cocoa in our diet. The pathways through which it modifies cell signals and blood flow are still poorly understood.

Therefore there are certain factors that must be considered before initiating the regular use of cocoa.

The presence of oxalates in cocoa can increase the urine excretion of oxalates and thus, promote kidney stone formation, a highly risky condition.

Excessive amounts of chocolate can cause blood thinning and therefore increase the risk of bleeding and bruising in people with bleeding disorders and those on blood thinning medications.

Caffeine content of cocoa can worsen the symptoms of IBD (inflammatory bowel disease) such as diarrhea, in large amounts.

Blood sugar may also be raised by cocoa, and therefore, diabetes patients should avoid chocolate.

The high caffeine content can increase the risk of miscarriage, premature delivery or low birth weight in pregnant women.

Through the above studies, we can see that cocoa offers a variety of benefits for a better flow of blood through the arteries.

As a result, scientists are now trying to use the compound to develop formulations to aid this condition.

Therefore, it is advisable for those showing signs of hypertension and high blood pressure to try cocoa. The results will surely not disappoint.

READ THIS NEXT -
Cinnamon for Sinus
What Is Ideal Dosage of Kelp Supplements
Difference between Cinnamon Bark Oil and Cinnamon Leaf Oil
What Is Red Quinoa and Benefits?
4 Benefits of Coconut Oil for Epilepsy
Benefits of Cinnamon Leaves