As we grow older, most of our organs tend to lose their liveliness and regenerative abilities. The same goes for our largest organ, skin.

Some visible signs of aging are the appearance of wrinkles, dark spots, and sagging.

In addition to aesthetic appeal, the skin performs a variety of functions for which it is crucial to maintaining it well.

Some of these roles are protection from the environment, fluid level control, and body temperature maintenance. [1]

Cocoa has lately been emerging as a powerful superfood and is also being used to develop many skincare products.

Cocoa butter and lotions are becoming increasingly popular. Before we discuss its applications for skin health, let us discuss a little more about the compound. [2]

Cocoa is obtained from the dried and fully fermented seed of Theobroma cacao.

Despite its traditional use in cakes and confectionary items, it is loaded with nutrients and offers many health benefits.

In fact, in Latin, its name translated to “food of the god’s.” Here we explore how it can prevent aging of the skin. 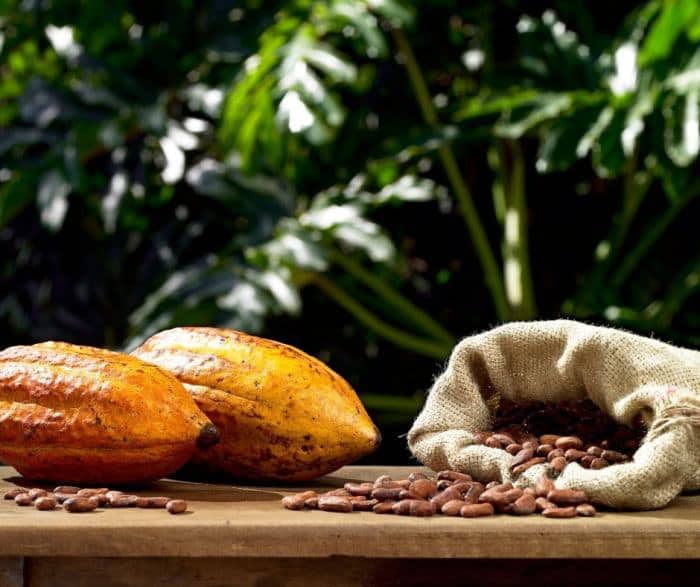 Cocoa has a unique healing system that helps it monitor any different types of cellular activities. Some of the advantages of using cocoa to delay skin aging have been listed as follows:

1. Flavanols in Cocoa have Photoprotective Action

Excess exposure to the sun can be very harmful to the skin. Not only can it cause conditions like erythema (red patches and irritation) but it can also lead to premature aging and appearance of wrinkles. [3]

Flavanols in cocoa have demonstrated the ability to protect against such harmful effects of UV radiation and prevent photoaging of the skin.

In a study conducted by Heinrich et.al the effects of mild radiation on two groups were observed.

The results of the study showed that long term ingestion of high flavanol cocoa has positive effects on the skin health of that group.

It decelerated photoaging and increased skin density and hydration. [4]

What does this Means? Flavanols in cocoa have excellent UV protective properties. Their long term ingestion can improve skin density and hydration and thereby slow down the rate of sun inducing aging.

It is well-established skin blood flow is inversely proportional to an individual’s age. That means, as we get older, the blood flow through our skin loses its intensity and rigor.

However, cocoa can act as a medium of restoring this activity.

The European Journal of Nutrition highlighted in its 2007 publication, the ability to cocoa to increase microcirculation of blood to the skin.

What does this Means? Cocoa is useful for delaying skin aging as it modulates blood flow and elevates oxygen saturation levels. Thus, making the skin surface smooth and driving away wrinkles

3. Polyphenols in Cocoa can aid in Skin Restructuring

Researchers have conducted extensive studies on cocoa to conclude its effects on skin toning and elasticity.

The evidence of such abilities was provided through the International Journal of Cosmetic Science study which showed that cocoa could influence several markers within the skin.

The key markers it targeted were glycosaminoglycans and collagen I, III and IV.

The polyphenols in cocoa could regulate these compounds as potently as commercially available products. [6]

What does this Means? Specialized formulations of cocoa bear great potential for improving skin elasticity. They monitor protein interactions to relieve the markers of aging.

Cocoa pod is the region around cocoa fruits which is often discarded during processing of the cocoa bean.

This pod, however, contains several nutrients that are useful in preventing aging of the skin.

In 2015, Azila Abdul Karim discovered that the extract contained polyphenols which had very potent antioxidant abilities.

What does this Means? When used as a cosmetic agent, cocoa pod extract acts against skin degrading enzymes and restores elasticity and vigor to the skin.

If the rate of build-up of free radicles exceeds the speed of their elimination toxic condition known as oxidative stress takes place.

Oxidative stress may set off a chain of enzymatic reactions which speeds up the aging of the skin. [8]

Coupled with its anti-inflammatory effects, cocoa’s radicle scavenging capacity makes it useful for protecting against such cases.

Polyphenols in cocoa have been estimated to have a very high total antioxidant capacity (TAC) making them helpful in driving away free radicles. [9]

What does this Means? Coca could be potentially used to eradicate harmful free radicles which are the cause of skin aging. It reduces oxidative stress by improving antioxidant enzyme activity.

6. Cocoa is an Excellent Hydrating Agent

Skin requires moisture to stay smooth. When the balance of water in the skin is not maintained, drying takes place gradually.

If not given required attention the skin may become extremely dry and lead to a condition known as xerosis cutis.

Cocoa has been observed to behave as a humectant, i.e., an agent which prevents loss of moisture from the body.

This has led to the vast commercialization of cocoa butter as a moisturizing agent.

It hydrates the skin and forms a barrier to prevent water loss and invasion from foreign pathogens.

What does this Means? The highly potent moisture preserving the ability of cocoa shows the compound can be used to develop lotions and cosmetic agents which act against dry skin.

7. Cocoa can Protect the Skin from Damage from the Environment

Cocoa is rich in chemicals called flavonoids. They play a fundamental role in many of cocoa’s metabolism controlling activities.

Flavonoids act as antioxidants and decrease the intensity of oxidative stress.

A study from Photochemistry and photobiology also highlighted that flavonoids could act on skin fibroblasts and activate a compound, hesperetin. [10]

This compound can form a shield around the skin and prevent damage induced by the sun or other environmental factors.

What does this Means? The flavonoids in cocoa possess skin protective properties. It monitors the effects of environmental risk factors like sun and pollution.

The primary goal of the consumption of cocoa or dark chocolate is to optimize some flavonols taken in by the body.

Further research is required to determine the optimal dose. However, at present, 25-40g of dark chocolate containing 85% cocoa is recommended.

Milk and white chocolate do not act as suitable supplements. [11]

There are certain factors that mustbe considered before initiating the regular use of cocoa.

1. Cocoa can cause allergy

2. Cocoa may Cause Anxiety

3. Cocoa can have Drug Interactions

4. Cocoa can trigger a Migraine Headache

6. Cocoa should be avoided in Bleeding Disorders

7. Cocoa should be Avoided before Surgery

9. The high amount of cocoa is not safe for pregnant and breastfeeding women

Research indicates thar cocoa offers a variety of benefits for the skin.

As a result, scientists are now trying to use the compound to develop lotions and cosmetics using it.

Therefore, it is advisable for people looking to lower signs of aging to give cocoa a try. The results will surely not disappoint.