Cinnamon oil is the extract from the cinnamon tree. This tree grows in Sri Lanka, Indonesia and India. Commercially grown trees are maintained at heights of 6 feet. The bark of the tree yields cinnamon quills which are harvested every 2 years. Cinnamon oil is extracted from Cinnamomum zeylancium tree, which is also called ‘True’ or Ceylon cinnamon. Cinnamon oil is part of the essential oil family and has great value in aromatherapy.

There are different methods of extracting cinnamon oil from the various parts of the plant. Depending on the parts used and the process, there is a variation in the strength and quality of the oil. Usually the bark and leaves are used to extract the oil. Aromatherapists prefer cinnamon bark for it is said to produce better quality oil.

The first method of extraction is the distillation process which is the most popular. The leaves or barks are placed in a steam distiller that resembles a pressure cooker. The cinnamon is subject to high pressure steam that causes oil globules to get released and then evaporate. The vapors pass through a cooling pipe where they condense and turn into liquid again. The water is separated from this liquid and the cinnamon oil retained.

The pressing method is used to extract cinnamon oil from the leaves. The leaves are chopped into tiny bits and then pressed mechanically. The liquid is then separated from the oil. However, this type of cinnamon oil has a short shelf life. 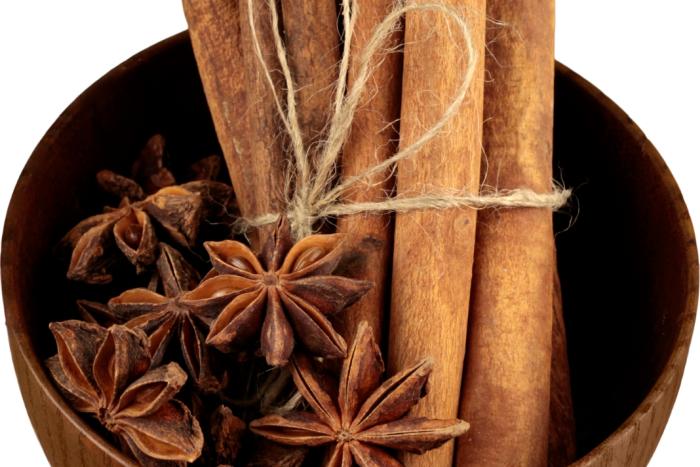 Maceration is an extraction process that is used to produce cinnamon oil meant for topical application or for massages. The plant material is soaked in vegetable oil and then heated to boiling point. After this the liquid is strained and the essential oil separated. This is not pure but infused essential oil.

Cinnamon oil can even be extracted at home. Get some cinnamon bark and leaves and place in a cooking pot. Add 2 cups carrier oil and heat for 3-5 minutes on medium flame. Remove and allow it to cool before straining it. Place the final product in a dark container to protect it from harsh light.

The bark yields around 0.5-1% oil and the leaves 1.6-1.8% oil. The oil extracted from the leaves is of a more delicate variety. The benefits of cinnamon oil are got from the chemical compounds found in it like eugenol, cinnamaldehyde or cinnamic aldehyde, eugenol acetate and benzyl benzoate.

Benefits and Uses of Cinnamon Oil

The therapeutic benefits of cinnamon oil are as an: astringent, aphrodisiac, carminative, cardiac, insecticide, analgesic, antiseptic, antispasmodic, antibiotic and as a tonic.
Cinnamon oil can be used to as an instant home remedy to ease an aching tooth. It has antibacterial and antifungal agent and is used to make products to heal infections, as a sexual stimulant and to help with blood circulation.

According to some studies, cinnamaldehyde has fungitoxic properties and its vapors can treat respiratory tract mycoses such as Candida albicans, Aspergillus niger, Histoplasma capsulatum and more.

In aromatherapy, cinnamon oil is blended and with other essential oils like benzoin, lavender, thyme, rosemary, ginger, grapefruit, frankincense, cloves, cardamom and coriander for therapeutic purposes. It can be used to treat general pains, respiratory tract infections and rheumatism. It can calm us when we are depressed. It can be used to ease period pains and tone the body.

It can be used in vaporizers or burners to ease colds, stuffy nose and general symptoms of acute bronchitis like weakness and body pain. Used as massage oil in a bath, cinnamon oil offers antiseptic properties that could be used to fight infections. It can calm the digestive tract and cure nausea and vomiting, ease joint and muscular pain. It can even be used as a lotion or cream and offers similar benefits.

Cinnamon oil can stand cooking at high temperatures and is preferred over cinnamon extract to make cinnamon apples and hard candies. It is a popular choice for room fresheners and potpourris since it has a very pleasant aroma.

Cinnamon oil is an excellent repellent for mosquitoes for it can kill the larvae. Using cinnamaldehyde to kill mosquitoes is considered an environmentally friendly option. Cinnamon oil can be added to herbs to improve their remedial action and make them taste better.

In a scientific study, it was found that cinnamon oil was able to inhibit the growth of molds. The Aflatoxin production by the mold Aspergillus parasiticus was studied using a yeast- extract. It was found that clove oil, cinnamon oil, eugenol and cinnamic aldehyde all displayed antifungal activity and prevent mold growth.

Cinnamon oil got from the leaves is non-toxic. Eugenol and cinnamaldehyde could irritate the mucus membrane and hence should be carefully used. Pregnant women must not use cinnamon oil due to its emmenagogue (stimulation of uterine bleeding) action. High doses could lead to convulsions. Cinnamon oil is not generally recommended to be used for skin care products as it could cause irritation.

Cinnamon oil is very strong and is usually not recommended for internal consumption. Used topically, it must be tested on the skin before it is applied. Do not use cinnamon oil directly on sensitive areas like the face.

2 thoughts on “Cinnamon Oil and Benefits”