‘FAT’ has been considered as an enemy whenever Healthy eating or Health comes into the picture.

A ‘Low-Fat’ diet is what most people resort to when they start ‘Dieting.’

There is compelling evidence that implicates the ill effects of a high-fat diet on health, and there is no denying that.

Despite all the shaming dietary fats have received in the past it cannot be ignored that they’re still an essential nutrient and are required for the body’s healthy and normal functioning.

They are required for proper brain functioning, for the dissolution of fat-soluble vitamins, for the synthesis of various hormones, and they also provide cushioning to our visceral organs.

Recently there has been a stir about the advantages of consuming ‘good fats.’

Saturated Fat is now considered as the enemy and not Fats as a whole. As a result, natural oils are now avoided as they are rich in saturated fats and refined oils are being popularly used.

This brings us to the topic at hand- Coconut oil for cooking.

In areas that are native to Coconut trees such as Sri Lanka and South India the coconut tree has often been regarded as the ‘Tree of Life.’

Coconuts and coconut-based products are a major part of the diet of the people in these areas especially Coconut oil.

Coconut oil is extracted by crushing and pressing the ‘copra’ from the coconut in large mills. The reason why coconut oil has received so much shaming in the past is that of its high saturated fat content. Around 90% of the fats in coconut oil is of thesaturated type which is normally considered as ‘Bad Fats.’

In spite of that consumption of coconut oil has been found to be beneficial in the treatment of various health issues including diabetes, heart diseases, irritable bowel syndrome, etc .

The saturated fats in them are composed of Medium Chain Triglycerides (MCTs), their metabolism and absorption are different than those of animal origin. It is the kind of saturated fats present in them that confers them with these health benefits.

The MCTs present in coconut oil confers the following benefits:

Benefits of Using Coconut Oil Over Refined Oil For Cooking 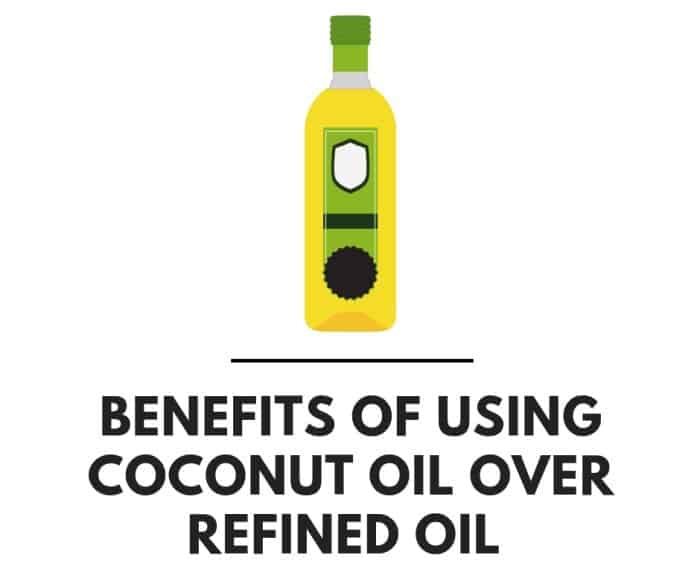 As surprising as it may sound, coconut oil helps in maintaining a healthy blood lipid profile.

A few animal models of studies have suggested the use of coconut oil in reducing the circulating levels of low-density lipoprotein (LDL) and total cholesterol in the blood.

Another study conducted on pre-menopausal women showed a beneficial lipid profile, the reason behind this believed to be MCTs.

They are directly absorbed from the intestine and sent to the liver directly through the portal vein.

Therefore, they are not involved in the synthesis and transport of cholesterol thereby leading to lower LDL and total cholesterol levels in the blood.

Another study conducted on individuals with high levels of cholesterol showed the association of lower levels of LDL-c in groups with high consumption of coconut oil as compared to the group who consumed safflower oil or butter.

What does this mean?
The MCTs after being absorbed in the intestine are sent straight to the liver thus avoiding the biosynthesis and transfer of cholesterol consequently leading to lower LDL and total cholesterol levels in the blood.

2. They help in lowering the risk of Cardiovascular diseases

A human-based model of the study suggested that diets including coconut oil led to lower levels of postprandial tissue plasminogen and lipoprotein (a)- a blood marker that has been implicated in the incidence of heart attack.

Apart from lowering the LDL levels and total cholesterol as discussed above, coconut oil was also found to elevate High-density lipoprotein (HDL) levels.

High levels of HDL in the blood has been associated with good heart health.

What does this mean?
Coconut oil has beneficial effects on heart health as it elevates HDL levels and reduces levels of lipoprotein (a), a blood marker which is linked to the risk of heart attacks.

3. It helps in weight loss

A human-based study showed that the group supplemented with 30 ml of coconut oil per day in addition to a hypocaloric diet, and 50 min of exercise showed a reduction in LDL levels,

There was an increase in the HDL levels along with a reduction in the waist circumference of these women as compared to the group supplemented with soybean oil.

Both groups showed a reduction in BMI .

This suggests the role of coconut oil reducing abdominal obesity along with a hypocaloric diet and regular exercise.

Since the MCTs are directly transported to the liver, they are immediately broken down to liberate energy and do not get stored as fats, thereby increasing energy expenditure and preventing fat accumulation. This causes weight loss.

What does this mean?
The MCTs present in coconut oil aid in weight loss and when supplemented with hypocaloric diet and regular exercise they help in reducing abdominal obesity.

4. It has anti-stress and antioxidant activity

The anti-stress and antioxidant activity of coconut oil was tested via an animal model.

The stress in them was marked by higher lipid peroxidation levels and lower levels of antioxidant enzyme superoxide dismutase.

Coconut oil supplementation led to a reduction in lipid peroxidation and an increase in the activity of superoxide dismutase.

These properties of the coconut oil are mainly attributed to the MCTs present in them along with polyphenols .

What does this mean?
The MCTs and polyphenols present in coconut oil are responsible for its anti-stress andantioxidant activity.

5. Cooking with coconut oil reduces the toxicity produced due to heating

The MCTs present in coconut oil contains a large fraction of Lauric acid (LA). The health benefits of MCT are attributed to the presence of lauric acid to some extent.

MCTs rich in lauric acid make them a suitable oil for frying at moderate temperatures, if used for deep frying at higher temperatures there is a higher degree of accumulation of Acrylamide (a potential carcinogen, that is formed when starchy foods are fried at high temperatures for a long time).

Furthermore, it was discovered that coconut oil rich in saturated fats caused less cellular damage to liver and kidneys, however, some studies have also revealed that repeated heating of coconut oil at high temperatures can cause genotoxic effects on the liver.

What does this mean?
The lauric acid and saturated fats present in coconut oil actually reduce the build-up of carcinogens with frying provided that coconut oil is not heated at very high temperatures and there is no repetitive heating involved.

Cooking oils are mainly of two types- refined and unrefined (or natural) oils. The reason for their difference lies in the processes by which they are made. Unrefined oil as the name suggests goes through a minimum number of processes to keep the nutrients intact.

Refined oil, however, goes through a series of processes (such as bleaching, deodorization etc.), the purpose of these processes is that it makes them more suitable for cooking.

For instance, unrefined coconut oil will have a particular smell and flavour that it imparts to the food whereas refined oil imparts no smell or flavour as it is put through so many processes to avoid that.

These days unrefined oils are being replaced by refined oils which are often advertised as “heart-friendly”. In such cases, these oils are processed further to add more PUFA (Polyunsaturated fatty acids) to it.

These unsaturated fatty acids are essential for our body and have known to have many known beneficial health effects including lowering the risk of cardiovascular diseases .

The reason why their intake is emphasized is because content in PUFA rich foods is also not very high, as it should be because the requirements of unsaturated fatty acids in our body are not much.

As it is rightly said too much of anything is never good, the high amounts of PUFA present in these refined oils (especially the levels of omega6 fatty acids and the ratio between omega6 and omega3 fatty acids) are detrimental to health.

In fact, it is also suggested that coconut oil is consumed occasionally if not regularly to obtain maximum health benefits without it affecting the health in a negative manner, that it should be alternated with oils rich in PUFA such as olive oil and soybean oil.

This will help maintain the required intake of saturated fats from coconut oil and that of PUFA from the soybean or olive oil .

Even though there is experimental evidence that supports the use of coconut oil for cooking because of its health benefits, the results of these experiments have been quite inconsistent.

For instance, a few studies suggest the replacement of coconut oil with vegetable oils rich in unsaturated fats for prevention of CVD6.

Furthermore, certain studies conclude that the evidence suggesting its health benefits is not compelling enough. The method of experiment or the use of hydrogenated (refined) oil instead of unrefined coconut oil could be a few of the reasons behind these inconsistent findings.

Therefore, more research with consistent findings is required to confirm the benefits of coconut oil for cooking.

The debate between the use of refined and unrefined oils (natural oils such as coconut oil) has still not been resolved.

Our body requires a certain amount of those, and the consumption of excess unsaturated fats also has ill effects on health.

This does not mean that all the studies and researches implicating the role of saturated fats in various diseases are untrue.

The key in such cases is LIFESTYLE, a healthy lifestyle that involves regular exercising is essential.

With that being said if one maintains a healthy lifestyle and is free of medical condition then the consumption of saturated fats within limits might even cause more good than harm.

READ THIS NEXT -
Benefits of Cocoa for Heart Health
What is Goji Tea?
Manuka Honey vs. Buckwheat Honey: Which Should You Choose?
Bee Pollen for Weight Loss : Does it Work?
12 Awesome Evidence Based Health Benefits Of Chia Seeds
Cinnamon for Acne