Insect bites and stings are quite common and experienced by all. Usually, insect bites are harmless, but some bites may be toxic and release harmful substances inside the body.

Insect bites are followed by itching, skin reddening, pain, swelling, burning, irritation, tingling or numbness in the affected area, depending on the type of insect. This may last from few hours to few days.

Most common insect bites are from bees, wasps, mosquitoes, spiders, ants, hornets and fleas. Some people may develop an allergic reaction to insect bites called anaphylaxis.

Insect bites may also lead to infections and other diseases as insects are carriers of microbes and toxins.

The reactions from insect bites are treated by applying a soothing cream or ointment to the affected area. Insect repellents can be used to prevent insect bites. Several natural plant-based oils have been identified that can repel insects and treat insect bites.

Coconut oil is one such oil which is used in several insect repellent formulations. It is obtained from the mature and dried fruit of the coconut palm tree (Cocos nucifera).

It is rich in saturated fats and medium-chain fatty acids. It has several therapeutic advantages that help in the treatment of insect bites: 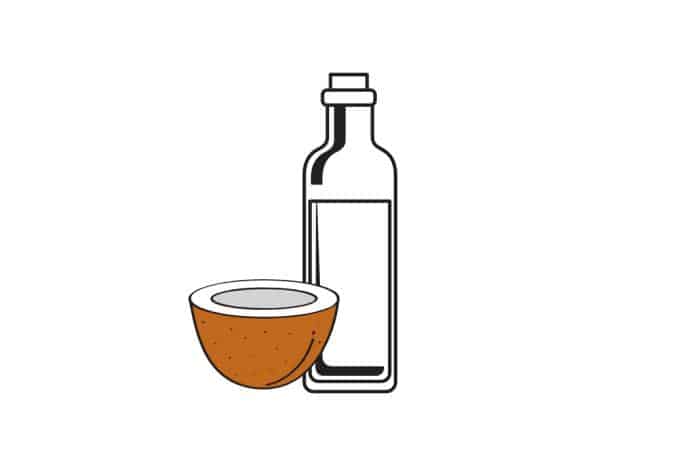 Since long, we have been using coconut oil over mosquito bites, any bites so that it does not itch and get inflamed. These are the miracles coconut oil can do to your skin:

1. It is anti-inflammatory in nature

Insect bites usually result in skin inflammation. This is because bites and stings leave behind insect saliva, acids or venoms, and cause skin puncture.

To protect the skin from their harmful effects, the immune response of the body sends cells and proteins to fight any foreign substances or objects that have entered the skin.

This leads to swelling and inflammation of the affected area. The bites and stings may stimulate nerve endings in the skin that can result in sensations of pain.

Coconut oil is proven to possess anti-inflammatory and analgesic (pain relieving) properties, due to the presence of saturated fatty acids like lauric acid, palmitic acid, and oleic acid.

It suppresses the inflammatory mediators like Tumor Necrosis Factor-alpha (TNF-α) in the skin.

Thus, it can be used to relieve pain and inflammation caused by insect bites and stings.

It also neutralizes the effect of toxins released by the insect. Massage on the affected area is known to help in combating swelling and pain.

It also helps in removing the itchiness following an insect bite.

What does this mean?
Anti-inflammatory and pain relieving nature of coconut oil make it an effective treatment to counteract the after effects of insect bites.

2. It has anti-microbial properties

Insects are carriers of bacteria and viruses and are known to cause many diseases. Through bites and stings, the insect can transmit the disease-causing microbe inside the skin and blood, and cause infections.

Applying coconut oil is beneficial in preventing such infections as it is known to be inhibitory against various species of microbes.

It has a strong anti-microbial nature, which helps in suppressing the growth of various bacteria, fungi, and viruses.

This anti-microbial nature of coconut oil is due to its fatty acids constituents like lauric acid, caprylic acid, and capric acid.

These fatty acids are capable of disrupting the cell walls of bacteria. They can also inhibit viral replication and binding by dissolving their lipid envelopes.

In this way, coconut oil helps in prevention of infections and diseases resulting from insect bites.

What does this mean?
Coconut oil can prevent and treat microbial infections caused by the biting of insects.

3. It acts as insect repellant

Mosquito bites are very common and often cause redness and itchiness. They are also responsible for various communicable and life-threatening diseases like malaria, dengue, encephalitis, chikungunya, zika fever, to name few.

Coconut oil-based formulations are found to be effective against mosquito bites from Aedes and Anopheles mosquitoes that cause various diseases.

In a study published in Journal of the American Mosquito Control Association, the toxicity of methylated coconut oil against the larvae of two species of mosquito Anopheles farauti and Culex annulirostris was proven.

Moreover, oleic acid and linoleic acid, which are present in coconut oil, were found to possess larvicidal behaviour against the mosquito Culex quinquefasciatus.

Another common insect infestation is by Head louse that occurs mostly in children. Coconut oil formulations were able to treat head louse infestations with 93-100% efficacy.

The European Journal of Pediatrics reports a study in which coconut and anise spray was found to be quite effective against head louse.

In another study, natural remedy consisting of coconut oil was beneficial in treating head louse infestations in children.

Coconut oil was also used as a repellent against Simulium damnosum (Blackfly) bites.

Several essential oils are used as insect repellents, but they can cause skin irritations. Therefore, they require a carrier for formulating creams and lotions.

Coconut oil is widely used as a carrier for many essential oils in developing insect repellents. It is considered very safe for use and does not cause any irritations, allergies or adverse reactions.

The essential oils are also highly volatile. Thus, adding of coconut oil slows their evaporation and increases the efficacy.

What does this mean?
Coconut oil has insect repelling properties and is being used with many essential oils to formulate repellents. It is also completely safe for use and has no side effects.

How to apply Coconut Oil

The best way to apply coconut oil is before the injury actually happens, you might find this amusing but it is possible!

Let's take an example if you are a bodybuilder you are likely to get stretch marks on your body. If you start using coconut oil before you can get them helps in coping up with the problem altogether.

Similarly, if your area is infested with mosquitoes, sleep after applying coconut oil, this will ensure coconut bites do not get inflamed and you do not itch while sleeping.

Another important point here is to keep the oil applied for long duration and also till the time problem is healed.

As coconut oil is absorbed very quickly by our skin, you may want to use a bandage or cotton dripped in coconut oil and keep it on the affected area.

You may also tape the bandage t the area. This exposes the area to coconut oil for a longer duration and speeds up healing.

Other factors which is continuous usage - coconut oil may not fade scars etc. quickly. It may take several months before the affect is significant. Thus it is important that one keeps applying coconut oil on the area without fail and patience.

Which coconut oil to use?

If you do not get reliable virgin oil brand in your neighbourhood you can make it yourself easily (see method here).

If you are buying virgin coconut oil from the market, make sure you opt for a good brand as "virgin coconut oil" is not bound by any standards and thus various producers may call their oil virgin while it may not be 100% so.

Precautions to be Taken while Using Coconut Oil

Here are a few basic precautions to be taken while using coconut oil:

Coconut oil has many benefits for preventing and treating insect bites. Its anti-inflammatory and analgesic nature helps in dealing with the swelling and pain encountered after an insect bite.

It soothes the skin and removes the itching.

Due to its anti-microbial behaviour, infections and diseases spreading through insects are prevented. It also acts as an excellent repellent of insects and used in many creams and lotions to resist insects.

It is easily available and considered safe to apply.

READ THIS NEXT -
What is Maca
5 Benefits of Argan Oil in Thrombosis
Maca Side Effects
How Spirulina Boosts Your Immune System
Manuka Honey vs. Kanuka Honey: What Is The Difference?
How is Kelp Different from Seaweed?