Delayed Onset Muscle Soreness or DOMS is a type of soreness that develops after a day or two of a physical activity that puts excessive load on the muscles.

It peaks between 24‒48 hours after exercise. Some suggest that it is a side effect of the repair process which develops in response to muscle damage [1].

Physical activities that can cause DOMS include, jogging, jumping, walking down the hills, strenuous aerobics, etc.

Some other common symptoms include stiffness of joints, temporary reduction of range of motion of a joint, swelling and tenderness of the joints, increase in the level of an enzyme, creatine kinase, in the blood that signals muscle tissue damage.

Muscle pain can be relieved by applying an ice pack, massage, and acupressure.

The muscle damage and its reduced functions take time to heal.

Spirulina has been considered a good natural supplement to help muscle pain.

Spirulina is cyanobacteria or blue-green algae. The major phytochemical present in Spirulina is phycocyanin.

It is rich in protein content and hence used as a Single Cell Protein, commonly known as SCP.

It has a high content of polyunsaturated fatty acids, omega‒3s, vitamins, and minerals. Spirulina is thus a functional food.

6 Benefits of Spirulina in DOMS

Spirulina has high nutritional value and several health benefits due to the presence of phytochemicals, phycocyanin, flavonoids. 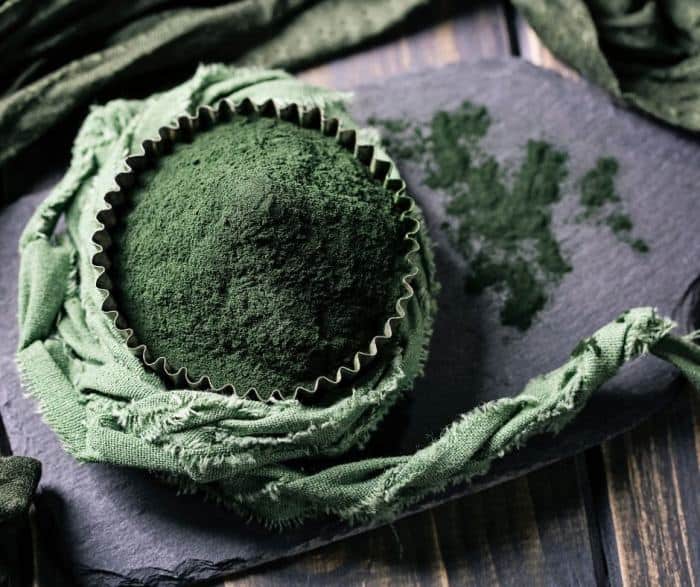 1. It has Anti-Inflammatory Activity

The major phytochemical present in Spirulina, phycocyanin has anti-inflammatory property. This prevents the inflammation of joints.

The anti-inflammatory activity is linked to its antioxidant potential [2]. The free radicals are scavenged by phycocyanin which prevents inflammation.

Moreover, it also inhibits the release of inflammatory mediators by inhibiting the action of NF‒ĸB pathway [3].

Antioxidants also have a protective role in exercise-induced muscle damage [4].

Inflammation at the joints is reduced and also the muscle damage is prevented. Hence, the antioxidant property and anti-inflammatory activities are linked with each other.

What does this Mean? Intake of Spirulina alleviates the symptoms of pain in muscles related to inflammation.

Fatigue and tiredness are common after any physical activity. Spirulina is known to prevent chronic fatigue.

The essential fats and carbohydrates present in Spirulina are absorbed easily by the cells which make the release of energy fast.

It enhances the growth of Lactobacillus which produces vitamin B6 that helps in the release of energy [5].

This boosts energy levels and further helps in recovery from fatigue.

What does this Mean? Symptom of chronic fatigue in DOMS can be relieved by consumption of Spirulina.

3. It has Analgesic Effect

Phycocyanin, a phenolic compound present in Spirulina has pain relieving effect which can be beneficial in case of delayed onset muscle soreness.

The pain sensitivity that occurs in the damaged muscle tissue in the sufferers of DOM can be ameliorated by the therapeutically important component of spirulina that is phycocyanin.

What does this Mean? Phycocyanin, the most active ingredient of Spirulina has analgesic like property which relieves pain.

4. It has a High Nutritive Value

Studies have suggested that nutritional intervention is one of the preventive and therapeutic ways to reduce the risk of Delayed Onset of Muscle Soreness (DOMS) [7].

A study revealed that on the intake of 1.8g of omega‒3 fatty acids, 27 male participants demonstrated a reduction in DOMS [8].

What does this Mean? This means that the high nutritional content of Spirulina especially omega‒3s can prove beneficial in reducing DOMS in athletes as well as non‒atheletes.

Sixteen people were given Spirulina for three weeks.

The blood plasma significantly had less concentration of malondialdehyde (an organic compound which is a marker of oxidative stress) and the activity of two enzymes viz.

What does this Mean? In severe cases of DOMS, muscle tissue can be damaged or muscle tissue injury may occur. Supplementation of Spirulina in diet can prevent this damage to a great extent.

Hyperalgesia is a heightened sensitivity to pain. DOMS has been associated with nerve growth factor which is known to increase pain response8.

The nerve growth factor is generally secreted more in response to inflammatory response such as that in DOMS which can cause joint pain.

Spirulina’s phycocyanin prevents the development of the hyperalgesic reaction.

What does this Mean?  The most active therapeutic component of Spirulina, phycocyanin, has the ability to reduce sensitivity to pain by preventing the action of inflammatory mediators that induce pain.

A spoonful of Spirulina or approximately 5g/d is recommended. The healthcare professional must be consulted for an optimum amount that should be consumed as it varies from individual to individual.

Spirulina is considered as GRAS that is ‘Generally Regarded As Safe’ by the Food and Drug Administration (FDA).

Some people show stomach disorders like constipation as the sole side‒effect.

Pregnant women and breastfeeding mothers should always consult the doctor before consuming Spirulina.

The patients of phenylketonuria should avoid the consumption of Spirulina.

Spirulina is a functional food with both nutritional as well as health benefits.

The therapeutic ingredients of Spirulina are major protein, omega‒3s and phycocyanin.

It has anti-inflammatory, antioxidant and analgesic properties which make it effective against DOMS.

Most importantly, it prevents muscle tissue damage that occurs in severe cases.

The nutritional supplementation of Spirulina in the diet has been shown to reduce the symptoms of DOMS in athletes as well as non‒athletes.

It prevents chronic fatigue that is common after vigorous exercise. Moreover, it inhibits the activity of creatine kinase in the blood that signals muscle tissue damage.

Overall, Spirulina is a nutraceutical which can be regarded as the food of the future as it is regarded as safe for supplementation in the diet on a daily basis. It is effective against Delayed Onset of Muscle Soreness.