Cinnamon is a very popular spice, harvested from the bark of evergreen trees, which is used all over the world since centuries.

In addition to being a condiment, it has also proven beneficial in treating various disorders through its numerous medicinal properties.

More than a dozen trees are grouped under the name ‘Cinnamon’ and all are grown commercially for spices.

The Cassia cinnamon plant grows up to 10-15 m in height. The bark is greyish in color and is very hard.

The leaves are elongated and have a length of about 10-15 cm. These leaves appear reddish in color when young.

Cassia cinnamon (Chinese Cinnamon) is derived from the Cinnamomum cassia plant which is native to China, Vietnam, India and various other East Asian countries. It is one of the most common types of cinnamon used all over the world.

In India and the US, the bark of the cassia cinnamon tree is most widely used.

Both the bark and the powdered variety of cassia cinnamon are used as flavouring agents. The buds of this plant are also used, albeit rarely, mainly in India.

Chinese cinnamon is considered to be one of the 50 fundamental herbs in traditional Chinese medicine.

There also seems to be some evidence regarding the usefulness of cassia cinnamon in treating Type 2 diabetes.

It has been shown that consuming cassia cinnamon for 6 weeks helps to control blood pressure and blood glucose levels.

However, the evidence for this is scant and inconclusive.

However, the reports are not convincing and more research needs to be carried out to determine the usefulness of cassia cinnamon in medical conditions.

Although cassia cinnamon is sold widely all over the world, it should be consumed with caution as it contains a high amount of a compound called ‘coumarin’.

It is a naturally occurring plant compound and is toxic to the liver, kidneys and the nervous system. It is thus recommended to limit the consumption of cinnamon to 2-4g per day and not to consume cinnamon for more than a few weeks at a stretch. 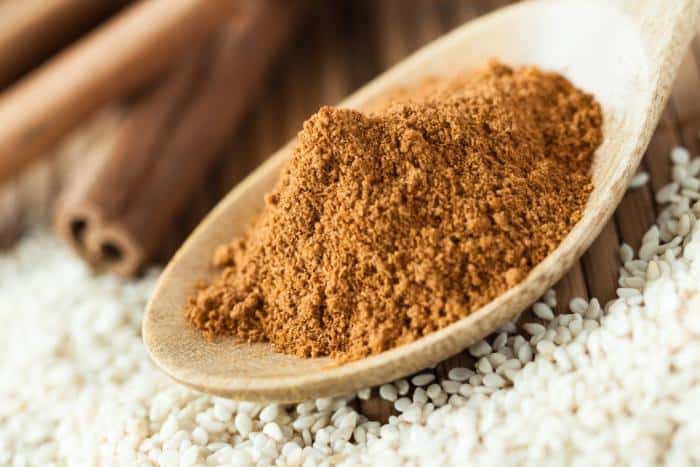 The Ceylon cinnamon tree grows upto 10-15 m in height. The leaves of Ceylon cinnamon are about 7-18 cm long and the flowers are greenish in color and have a distinct odour.

The purplish-black fruit of the tree contains a single seed.

Ceylon cinnamon (true cinnamon) is derived from the Cinnamomum verum tree species which is native to Sri Lanka.

The older name for Cinnamomum verum is Cinnamomum zeylanicum. Sri Lanka produces a majority of the Ceylon cinnamon.

Several cultivars of Ceylon cinnamon are available and they are distinguished on the difference in the taste of the bark.

The bark of the tree is widely used to obtain the spice. The Ceylon cinnamon variety is used widely as a flavoring agent in foods and perfumes.

In addition to its use as a spice, Ceylon cinnamon is also used to treat conditions such as arthritis and other inflammatory diseases, rheumatism, intestinal gas, and nausea.

It is also used to treat hypertension, common cold, as an antiseptic and in tonics. It has strong antibacterial, antiviral, anti-fungal and anti-oxidant properties. As it is a hypotensive, it can also be used to lower blood pressure.

In traditional medicine, it is used to treat boils and abcesses, diarrhea, vomiting, various respiratory and digestive disorders as well as cancer.

Ceylon cinnamon does not contain coumarin which reduces the effect of toxicity. Thus, consumption of Ceylon cinnamon will not be toxic to the liver or to the kidneys.

There are several features by which one can differentiate Cassia and Ceylon cinnamon.

Ceylon cinnamon is much more expensive than Cassia Cinnamon and the price can be almost 10 times that of Cassia cinnamon.

They vary in their taste as well; Ceylon tastes sweet whereas Cassia has a pungent, strong taste.

The flavor of Cassia cinnamon can be distinguished from that of Ceylon cinnamon as Cassia has a much more delicate flavor.

It is all right to consume small amounts of Cassia cinnamon occasionally.

However, it is recommended that you consume Ceylon cinnamon for daily use. Scientists claim that Ceylon cinnamon is safer to consume in higher doses as compared to Cassia cinnamon.

This brings us to a key difference between the two – % of coumarin levels.

Both cinnamon have coumarin but the % is much higher in cassia. This is the key reason why it is not recommended. While the quantity of coumarin mentioned in these varieties varies from studies to studies (as its dependent upon sample) – in general, cassia cinnamon can have upto 1% coumarin by weight while it is just 0.004% in Ceylon.

A large number of studies have been carried out, more with the Cassia variety rather than the Ceylon variety, to elucidate the benefits of cinnamon.

Studies have shown that cinnamon can help lower blood sugar and cholesterol in humans.

It is also beneficial to sprinkle small amounts of cinnamon to reduce sugar levels.

Thus, although cinnamon is used widely, it is necessary to ensure its source and safety before consumption.

The presence of coumarin in Cassia cinnamon can cause more damage than good and it is recommended to consume the true cinnamon i.e. Ceylon cinnamon.

Although a large number of studies have been carried out which have elucidated the numerous medicinal benefits of cinnamon, they do not always differentiate between the different varieties of cinnamon and these reports themselves are inconclusive.

Ceylon cinnamon and Cassia cinnamon are the most popular varieties of cinnamon.

Although Cassia cinnamon is more widely used, it contains a high proportion of the cytotoxic compound coumarin.

Thus, it is recommended that you consume Ceylon cinnamon which is regarded as the true cinnamon.

However, in both cases (especially cassia) it is necessary to ensure that the consumption is limited to 4-6g per day and is not consumed for a long time (6 weeks+).

This basically follows the rule that overdose of anything may be harmful.

There are several contradicting thoughts on this but again, if one is including cinnamon in the diet it will rarely go above 2-3 gms per day and thus no chance of overdose happens.

As always, it is necessary to consult a doctor before consuming cinnamon for medicinal purposes and ensure that you are not allergic to this spice.

READ THIS NEXT -
5 Reasons Why Manuka Honey is Great for Skin
Wheatgrass for Weight Loss - Can It Really Help?
Benefits of Wheatgrass in Pancreatitis
What is White Quinoa and its Benefits?
Cinnamon for Melanoma
Is Methylglyoxal in Manuka Honey Safe?