There can be various occasions during which one could happen to interact with bee pollen. Pollen can be present in flowering plants.

These consist of the male gametes (or reproductive cells) of that flower.

Bee pollen has found a number of uses in today’s time.

Even a tiny, single grain of the bee pollen consists of a number of nutrients that are required for the body. [1]

It can be used by people as an appetite stimulant, for nutrition, mouth sores, radiation sickness, and even premature aging.

However, bee pollen can also be toxic to many people. It may cause allergic reactions, as well as be described along with the course of this article.

It was recently observed that bee pollen may be contaminated with about 17 pesticides, which are poisonous.[2]

The research was conducted across 7 European countries.

This poses a threat if the bee pollen is consumed as the pesticides and insecticides observed were thiacloprid and chlorpyrifos as well as boscalid, which is a fungicide.

These compounds can combine and form even more hazardous substances.

Along with these, neonicotinoids can also be formed. These can eventually cause harm to the bees, eventually killing them.

Possible Side Effects Associated With Bee Pollen Use

Mentioned ahead are more adverse effects linked to bee pollen. 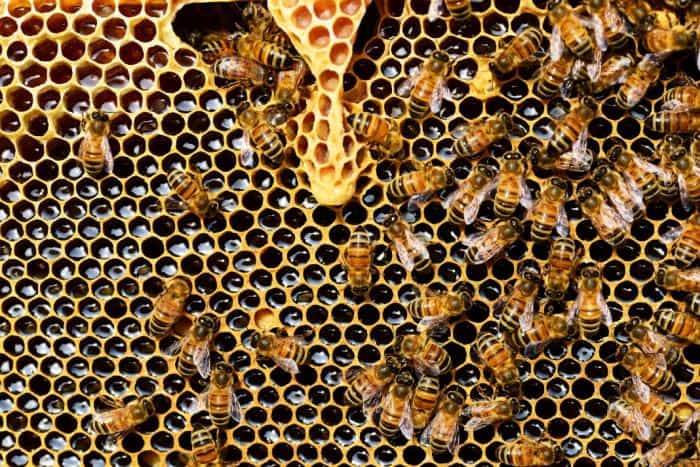 A 5-year-old male had a combination of conditions such as abdominal pain, swelling in the eyelids and lids and also vomiting. Total protein and albumin turned out to be low, and the urticarial rash was also observed.[3]

It later came into notice that the child was being given a spoon of milk along with bee pollen.

After another follow-up, it was noted that there was an increase in the abdominal pain, the gastric mucosa had hyperemia, congestion as well as edema.

Though the patch test of bee pollen was negative, upon stopping the ingestion of bee pollen, edema and abdominal pain disappeared.

Serum albumin returned to the original values. There was also a reduction in hyperemia as well as congestion of the gastric mucosa.

Propolis is another substance that may be present in the bee pollen. It is produced when the honey bees mix saliva with beeswax and it looks like gum.

It has been known to cause allergic reactions in many patients, in some cases, the reactions (dermatological as well as respiratory) were found to be life-threatening.

Bee pollen is often sold along with propolis without the mention of adverse effects of the latter on the label.

Asthmatic and atopic patients are at a higher risk of allergic reactions from propolis.

A 4 –year-old male developed rhinitis in the season of autumn. Tests with bee pollen were conducted.

The pollens used were the ones most commonly found in the local areas. The prick tests tested positive for the bee pollen as well as the local pollens.

The bee pollen samples were from Rosaceae, Asteraceae families, and Quercus genus. Hence, foods derived from bee and bee products can be harmful to those allergic to it.

Upon comparisons between patients suffering from honey, and bee pollen allergies, it was observed that the airborne pollen also contributes to the reactions.[4]

Sometimes, people develop allergies to honey as well because of the proteins in the pollen which are present it.[5]

What does this mean? Ingestion of bee pollen can result in reactions such as rhinitis, congestion and edema of the gastric mucosa, vomiting, abdominal pain, low levels of total protein and albumin and swelling of the legs as well as eyelids. Propolis may cause adverse effects in atopic and asthmatic patients.

When a 49-year-old patient, male, ingested bee pollen for over 5 months, he suffered from breathing difficulties, systematic edema that cause excessive weight gain (20 kg), anuria as well as loss of appetite.

A renal biopsy was done and acute renal failure was reported. In such a condition, the kidneys fail to eliminate wastes from the body. However, his condition improvised once hemodialysis was carried out.[6]

What does this mean? Ingestion of bee pollen may cause acute renal failure if taken over a period of 5 months.

A patient who had a history of honey intolerance, upon ingestion of bee pollen for a period of 3 weeks experienced peripheral blood hypereosinophilia (Eosinophils are a type of white blood cells), diarrhea, abdominal pain, anorexia, asthenia, and high serum total IgE levels.[7]

The elevated IgE levels, as well as hypereosinophilia, resolved once the intake of bee pollen was stopped. This was a typical case of eosinophilic gastroenteritis.

This was because of the symptoms such as eosinophilic infiltration of the digestive tract and gastrointestinal symptoms.

Another patient developed hypereosinophilia after the ingestion of bee pollen over a period of 6 weeks.[8]

The symptoms resolved once the bee pollen ingestion was stopped.

The patient remained devoid of symptoms stated above since then.

What does this mean? Honey pollen may induce eosinophilic gastroenteritis in patients sensitive to honey and bee pollen.

Is Bee Pollen Safe for Children?

Bee pollen is sometimes considered as an herbal remedy for children and adults.

However, it can create severe allergic reactions and anyone with known or suspected allergies must not be given bee pollen.

If children are to be given bee pollen, first perform the skin prick test or prick-by-prick test with all allergens like bee pollen, dust mites, local pollens, animal dander, and common fungi.

The bee pollen composition will be analyzed and other tests were done of the local pollen and bee venom extracts.

When such tests were carried out, the prick tests came positive for local pollen and bee pollen extracts but came up negative for all other allergens.

Hence, it was concluded that foods or supplements that contain bee pollen are unsafe for children or adults who have allergies.

There is some evidence that propolis which is an ingredient that combines beeswax and bee pollen is said to provide relief for ear infection in children.

However, this again can produce allergies, hence check with your pediatrician before giving your child any bee pollen product.

In Poland and France, doctors include bee pollen in the diet of anemic children and found some improvement in their blood analysis.

It is also considered an excellent food supplement to help growing teens and children for it is a rich source of natural foods.

There is no set dosage for bee pollen. The daily dose can be mentioned on the labels of the products.

Adults are advised to take 1-3 tablespoons daily of bee pollen for asthma and allergic symptoms.

Always perform an allergy test with tiny doses of bee pollen to check for any reactions before taking the actual dosage.

Even if you administer your children the right dosage, it is important to keep watching them for signs of allergies for in rare cases, although they may tolerate it initially, reactions can occur after a certain dosage threshold has been crossed.

Inform your doctor that you are giving your kids bee pollen.

Test for bee pollen allergies before giving them to children. If your child demonstrates even the slightest allergy, you must discontinue the product immediately.

Allergic reactions include redness, itching, hives, shortness of breath, swelling and in extreme cases it can lead to anaphylactic shock.

If children suffer from any medical conditions or have allergic asthma, blood or liver disorders bee pollen must not be given.

Since there is a lack of evidence about the safety of using bee pollen, doctors usually advise parents not to give them to children.

Another reason why bee pollen is not recommended for children is that you will not know if the supplement is contaminated by fertilizers or pesticides.

While children over 2 years can be given bee pollen, it is important to check the source of the product before administering it.

Is it Safe to Take Bee Pollen While Pregnant & Breastfeeding?

There are many questions raised about the safety of including herbal supplements like bee pollen in the diet of pregnant or breastfeeding women.

There are differing opinions and most nutritionists advise people to consult their OB/GYN.

It is possible that bee pollen is taken orally (via the mouth) could act as a uterine stimulant and create problems during pregnancy. Hence taking bee pollen orally it should be avoided.

Pregnancy is a very critical time for you are responsible for both your health and that of your child. During and after pregnancy women get stretch marks on her breasts and belly.

There are several topical products that are available to get rid of these unsightly marks. Most of them contain essential oils, vitamin E or bee products etc.

One product contains comfrey, elderflower and bee pollen in sweet almond oil and olive oil and this is said to help the skin expand and avoid the formation of stretch marks.

These products are safe to use during the first trimester.

Honey that contains bee pollen can be safely given to pregnant women.

However, it is generally advised that pregnant women avoid un-pasteurized pure honey since it will contain contaminants and organisms that could harm them.

Babies under 1year must not be given honey or any bee pollen products.

A study was conducted in China on the effects that Brassia campestres L. bee pollen had on pregnant women and if it affected fetal growth.

Pregnant rats were divided into 3 groups. The control group was just given a normal diet.

The other two groups had bee pollen added to their diet in different quantities apart from their regular food.

Their fetuses gained weight and there were lower death rates.

The fetuses also did not display any abnormalities like skeletal, visceral or external malformations. These results demonstrate that bee pollen could help improve the nutrition of pregnant women without affecting their fetuses.

More research is required about the benefits of bee pollen for pregnancy. Since bee pollen is also said to lower blood pressure and stress it could benefit pregnant women who suffer from these conditions.

It is also important to check the sources from which bee pollen has bee got to avoid any contaminants.

Since there is not much research on the subject, nursing mothers are advised to avoid bee pollen products as there is no evidence of its benefits and the risks could be far greater.

Honey or bee pollen that is bought must be checked for the presence of nicotenoids and insecticides such as imidacloprid as it may have an adverse effect on the nervous system.

Bee pollen may be a trend as of now, for the fact that it has a number of benefits, however, one must keep in mind that it can also cause more harm than the curing effect that it has.

READ THIS NEXT -
6 Science Backed Benefits of Argan Oil for Metabolic Syndrome
Cinnamon for Hypoglycemia
Manuka Honey vs. Kanuka Honey: What Is The Difference?
Can Quinoa Help in Cholesterol Problems?
Homemade Aloe Vera Cream
How Coconut oil Promotes Intestinal Health