The immune system is body’s defense mechanism to protect and fight against various infections. [1] [2]

It comprises of different cells, tissues, and organs that work together with several hormones, enzymes and other proteins to provide immunity or protection to the body from harmful substances and pathogens.

The white blood cells in our body are particularly responsible for immune response.

The functions of the immune system include preventing the pathogen from entering the body, detecting the entered pathogen, taking appropriate action against it to avoid further harm and restore the normal bodily functions.

An active and functional immune system is essential for maintaining a healthy body. The human body is exposed to various microbes daily which cause many diseases and infections.

A weak immune system causes various immunodeficiency diseases and cancer. The body is unable to resist the incoming bacteria, fungus, viruses, and parasites effectively, which leads to frequent illness and the person gets sick quite often.

The functioning of the immune system is affected by a person’s lifestyle, stress, dietary habits, mental health, and nutritional status.

Several nutritional supplements are known to boost the functioning of the immune system.

One such efficient and powerful source is Spirulina.

Spirulina (Spirulina platensis) is a type of blue-green algae which is edible and very nutritional. It is a rich source of several vitamins, minerals, proteins, and antioxidants.

It usually grows in warm climates and now is even successfully developed in laboratories. It grows both in salt and fresh water. 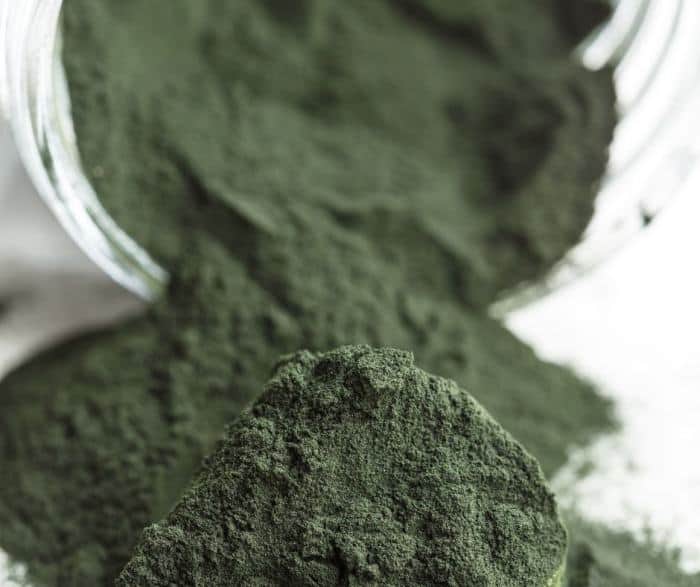 Spirulina has several benefits in boosting the Immune System:

1. It Increases the Production of Immune Cells

Several studies boast of the immunomodulating effects of Spirulina.

It primarily helps in the first defense against pathogens by activating the natural killer cells (NT cells). [3] [4]

These NT cells prevent viral infections and tumor growth. They kill the infected and stressed out cells that can harm other healthy cells.

These interferons are signaling proteins that alert other cells of possible infection so that they can initiate a response.

Spirulina is shown to increase the levels of IL-2 (interleukins-2) which is a signaling molecule and helps in proper coordination and regulation of white blood cells.

It stimulates the production of cytokines such as TNF-α (Tumor Necrosis Factor-alpha) and IFN-γ (Interferon- gamma) that help in proper coordination and communication within immune cells. [6]

This action is attributed to the presence of high levels of Vitamin A (β- carotene) and Vitamin C (ascorbic acid) in Spirulina. [7]

TNF-α helps in the regulation of immune cells and kills pathogens by initiating fever and inflammation.

It also inhibits viral replication. IFN-γ is also anti-viral and activates NK-cells while promoting the production of antibodies that fight the antigens. [8]

Studies show that the polysaccharide extract Immulina from Spirulina led to a proliferation of B-cells and T-cells (types of lymphocytes, involved with immune response) and several other immune enhancing factors and components. [9]

This polysaccharide is also known to be an activator of macrophages (cells that kill harmful cells and substances by engulfing and digesting them). [10]

All these lead to improved immune response.

What does this Mean? Spirulina boosts the immune system by stimulating the production and function of several immune cells and other components.

2. It Aids in Antibody Production

Antibodies are proteins used by the immune system to neutralize the antigens or harmful agents present in pathogens like bacteria and viruses.

They are made up of globular plasma proteins called Immunoglobulin (Ig).

They are very crucial for the removal of antigens and preventing damage to the body cells. A large number of antibodies will lead to a more efficient immune response.

What does this Mean? Spirulina stimulates the production of antibodies and helps the immune system to fight against antigens.

3. It is an Excellent Anti-Oxidant

Anti-oxidants protect the body from toxins and free radicals formed as a result of various metabolic reactions in the body.

A surge in the number of free radicals causes oxidative stress which needs to be neutralized by including more antioxidants in the diet.

These free radicals and toxins if left untreated cause damage and harm to body cells and are even known to cause cancer. [13]

During an immune response, the phagocytes (cells that digest and kill pathogens) produce reactive oxygen species to fight antigens.

Antioxidants are essential for balancing these oxygen species and protecting the immune cells from harm. [14] [15]

The pigment phycocyanin in Spirulina contains tetrapyrrolic compounds which are good antioxidants and can scavenge (search and remove) free radicals. [16] [17] [18]

What does this Mean? The anti-oxidant nature of Spirulina is useful in both protecting the immune cells and helping the immune system to protect the body against damage.

4. It is Anti-Microbial in Nature

Preventing the microbes from entering the body and causing harm is the primary function of the immune system.

Anti-microbial foods boost immunity by fighting off the germs and preventing illness and injury caused by them.

Spirulina has antibacterial and antifungal activity (particularly against the yeast Candida albicans).

Spirulina dosage results in increased levels of the cytokines TNF-α and IFN-γ which fight against pathogens by inducing fever and inflammation and creating conditions unfavorable for bacterial or fungal growth.

The polysaccharides and phycocyanin in Spirulina help in increasing the immune response against Candida albicans. [19] [20] [21]

Spirulina contains Selenium that has anti-viral and immune stimulating properties, which helps it to fight against many types of viral infections. [22]

It inhibits enveloped viruses by resisting viral penetration into the cells and preventing their replication.

This property is found useful in the treatment of viral infections like Hepatitis C and pneumonia. [23]

In a study, 66 patients with Hepatitis C infection were treated with Spirulina for the duration of six months.

The results showed considerable improvement in their condition with decreased viral influence (viral activity, replication, and absorption) in the liver. [24]

It is also helpful in treating immunodeficiency diseases like HIV (Human Immunodeficiency Virus) and used as a nutritional supplement for HIV patients.

A study conducted on 320 HIV patients who were given Spirulina supplementation, a rise in a number of CD4 cells (T-cells or a type of white blood cells that help in protecting the body from infection) was reported after just 6 months.

It also helped in the reduction of viral load (viral efficacy) while increasing Hemoglobin levels.[25]

Spirulina decreases HIV viral load by inhibiting the entry and fusion of HIV while preventing replication and increasing immune response. [26]

It also enhances the number of CD4 cells or T-cells (immune cells) that help in fighting infection. [27]

What does this Mean? Including Spirulina in the diet will help the immune system fight the bacteria, fungus, and viruses and lead to the development of a more efficient immune response.

5. It has Anti-Cancer Properties

A completely functional and active immune system prevents carcinogens from damaging the body cells. It can identify cancerous cells and kill them.

Spirulina improves this function of the immune system by exhibiting anti-cancer properties.

A study published in the Journal of Clinical and diagnostic research reports the efficacy of Spirulina in treating malignant disorders like Oral submucous fibrosis(OSMF), which is a precursor to Oral cancer.

Spirulina also did not show any side effects.

The immune boosting properties of Spirulina help in increasing the interferons (IFN-gamma) which prevent fibrosis and assist in relieving the symptoms of the disease.

This property can be used to prevent malignant growth and cancer. [32]

In another animal study published in the International Journal of Biological Sciences, it was stated that Spirulina reduced the occurrence of liver tumors by killing and inhibiting the growth of cancerous cells. [33]

Three tetrapyrrolic compounds in Spirulina have anti-proliferative properties and is known to inhibit the growth of pancreatic cancer cells. [34]

The polysaccharides present in Spirulina enhance the production of T-cells and natural killer cells which suppress tumor growth in glioma (a type of tumor in the brain or spine). [35]

These polysaccharides also help in the repair of DNA that is damaged by the carcinogens.[36]

Animal studies conducted to investigate the effects of Spirulina on tumor growth proves that oral administration of Spirulina activates the Natural killer(NK) cells which have anti-tumor effects.

These cells are capable of identifying cancerous cells and killing them. They also suppress the growth of tumors. [37]

What does this Mean? Spirulina assists the immune system in recognizing and preventing the growth of cancer cells.

6. It is Rich in Proteins

Spirulina is a rich source of proteins. About 62% of Spirulina is composed of amino acids.[38]

It has about 57grams protein per 100g intake. [39] It contains all the essential amino acids required by the body.

These amino acids are used by the body to build proteins required for several body functions.

Several proteins in the body assist with immunity and are crucial for the functioning of the immune system.

Dietary protein can be used by the body to produce antibodies, cytokines, interferons, phagocytes and other complementary proteins that support the immune system.

What does this Mean? Amino acids in Spirulina help in the formation of various proteins involved in providing immunity to the body.

7. It is Effective Against Toxins

Our immune system identifies and protects us against harmful toxins and chemicals. Toxin fighting substances can help the immune system to get rid of them and improve immunity.

Spirulina is effective against toxins and can assist the immune system in removing them.

The research was conducted to study the effects of Spirulina on 41 patients having chronic arsenic poisoning caused by contaminated drinking water.

They were treated with Spirulina extract and zinc supplements twice daily for 4 months.

Increased excretion of arsenic in urine was reported without any adverse effects. This means that Spirulina extract was able to remove arsenic and treat arsenic poisoning. [40]

What does this Mean? Spirulina boosts the immune system by helping in removal and treatment of harmful toxins in the body.

It is rich in proteins, vitamins, and minerals and full of active compounds that can be used by the body to boost the immune system and prevent infections and diseases.

It enhances immune cells production and stimulates them to mediate an active immune response.

Including Spirulina as a supplement in the diet, while taking appropriate precautions, will inevitably result in better health and prevention of diseases.