Arthritis is a condition of inflammation in the joints, causing pain and stiffness.

This condition leads to an inability for the body parts with joints (knee, fingers, ankle, wrist, neck etc) to move properly.

There are over a hundred types of arthritis. Some of the commonly occurring ones are osteoarthritis, rheumatoid arthritis, infectious arthritis, and gout.

In osteoarthritis, there is a breakdown of protective cartilage between the bones of a joint. In rheumatoid arthritis, body’s immune system attacks joints causing synovium (produces lubricating fluid) to thicken.

Infectious arthritis is caused as a result of the spread of infection. Gout is caused due to the high level of uric acid in the body.

All these arthritis conditions lead to severe pain in the joints affecting their movement. Most type of arthritis is common in women, while gout is more common among men.

For the treatment of arthritis, mostly analgesics and non-steroidal anti-inflammatory drugs ( NSAIDs) like aspirin, ibuprofen, are prescribed. Sometimes, even surgery is required.

These drugs have many side effects like stomach ulcer, headache, kidney problems, heart problems and many more. To avoid these it is better to switch to a natural alternative.

For arthritis, green tea is one of the best alternatives.

What is green tea?

Green tea is the product of leaves from the plant Camellia sinensis. It is different from the regular tea in being unfermented and unoxidized.

The other components found in green tea are alkaloids like caffeine, theobromine etc. These compounds provide stimulatory effects.

Traditionally, green tea has is used as a stimulant (increase alertness and energy), to lower blood sugar, for digestion, as a diuretic (increases urine production) and many other such purposes.

The polyphenol components in green tea are the main compounds that are beneficial in arthritis. These polyphenols belong to a class called catechin.

These compounds have antioxidant, anti-inflammatory, anti-microbial and chondroprotective actions that make them effective in arthritis.

Inflammation in joints due to one or other factor is the primary cause of arthritis. In order to get relief, the foremost treatment is the ways to reduce the inflammation.

Green tea is known to possess strong anti-inflammatory action by virtue of the presence of catechins.
Epigallocatechin gallate (EGCG) is found to have the strongest anti-inflammatory response among all the catechins present in green tea.

Its action is dependent on the type of cell.

It works by inhibition of the molecules or factors in signalling pathways that induce inflammation.

Research studies have shown the effectiveness of EGCG in rheumatoid arthritis and osteoarthritis. It inhibits certain interleukins (signalling molecules involved in inflammatory response) resulting in reduced inflammation in these arthritis.

What does it mean? It means consumption of green can reduce the pain caused by arthritis. This pain is reduced by decreasing the inflammation in the joints. The inflammation is subdued by the action of EGCG (a catechin in green tea) upon the signalling molecules that lead to swelling.

2. Green tea is an anti-oxidant

The production of free radicals in response to immune system molecules like macrophages and neutrophils is a natural process.

But in case of rheumatoid arthritis, the immune system molecules attack the synovial fluid in the joints.

The free radicals produced by the immune response attack on synovial fluid and cause inflammation.

All the green tea catechins are potent antioxidants. These compounds reduce oxidative stress by free radical scavenging and enzymatic inhibitions.

These polyphenols have been found to be effective against onset of arthritis in an animal model through their antioxidant mechanism.

EGCG has shown to be effective in the reduction of macrophages by modulating a signalling pathway in human bone cells. This shows its therapeutic potential against arthritis.

The green tea polyphenols are also effective against natural and chemical toxins that cause oxidative and in turn, lead to arthritis.

These compounds act on these toxins by free radical scavenging and chelating (binding of ions or metals by a compound) mechanisms.

What does it mean? This means consumption of green tea can furnish our body with antioxidants that can act on causing factors of arthritis. These compounds can not only help in treatment of arthritis but also in its prevention. 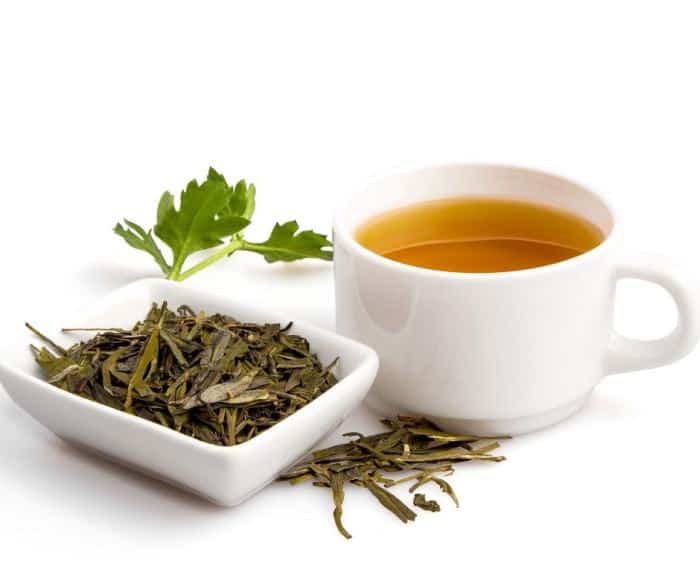 3. Green tea has antimicrobial action that benefits in septic arthritis

Some of the common bacteria causing this are Staphylococcus aureus, E.coli, and Haemophillus influenza.

These microorganisms attack the synovial fluid in the joint and cause inflammation resulting in severe pain.

Some of the catechins present in green tea have been found to have an anti microbial effect.

These compounds inhibit bacterial infection by damaging the cell membrane of the bacteria or by inhibiting the synthesis of fatty acid or certain enzymes in the bacterial cell that are important for its survival.

Certain other infections also cause arthritis as a symptom. For example, in chikungunya virus infection, arthritic pain can persist for a long time.

In a study, green tea catechins were able to inhibit this infection.

What does it mean? It means green tea can be used for treatment of various infection related arthritis. The green tea compounds can restrain the infection by preventing microbes to interact with the cells of the body.
By their antimicrobial actions, green tea catechins can prevent the occurrence of arthritis as well as can be used to relieve the pain.

In certain arthritis, like rheumatoid arthritis and osteoarthritis there is degradation of cartilage by some influence on chondrocytes (matrix releasing cells in cartilage) to destroy its own matrix.

Chondroprotective agents protect the chondrocytes and prevent cartilage degradation leading to the prevention of arthritis.

Green tea compounds, especially EGCG has been found to show chondroprotective effect in osteoarthritis in the animal model.

In another study, EGCG has been found to be a potent chondroprotective agent. In human chondrocytes, it could suppress inflammatory responses that lead to degradation of cartilage in case of osteoarthritis.

What does it mean? It means green tea can prevent certain arthritis that is caused as a result of cartilage degradation. Green tea compounds prevent this degradation by suppressing the responses in chondrocytes that cause inflammation.

Dosage of Green Tea For Arthritis

Green tea is popularly used as a beverage all around the world.

For its use in arthritis treatment, 2-3 cups per day or 250-300 mg of its polyphenols per day is recommendable.

Green tea can be used as a traditional beverage, i.e. can be infused with hot water for drinking. There are many other forms also available.

Green tea capsules having dried solid leaves can also be taken. These capsules are generally of 100-750 mg capacity. Depending on its capacity, 1-2 capsules per day can be sufficient.

Pills of its polyphenol extract are also available which can be taken 2-3 times in a week.

However, it is best to consult a health practitioner about the dosage of green tea supplements.

Green tea is generally considered a safe product for consumption. But being caffeine-containing product, care is required in many situations.

Overdose of green tea should be avoided.

Green tea in excess can cause nausea, loss of appetite, dizziness, heartburn or abdominal pain due to the extra dose of caffeine. Caffeine can also cause insomnia if taken in large quantities.

People with the following condition should avoid green tea:

Green tea in these conditions can aggravate the problems mostly due to caffeine related side effects.

Pregnant or breastfeeding women should avoid its consumption.

Children should not be given green tea. Green tea consumption by children can cause various above side effects. Even small amounts can be harmful as the dose of caffeine and polyphenols may be too high for a child.

It can be concluded on the basis of the above evidence that green tea is a very beneficial food product in arthritis.

Green tea is not only effective in the treatment of arthritis by relieving pain by reduction of inflammation, but also can prevent the occurrence of arthritis.

Green tea’s efficacy is not restricted.

It has wide applicability, i.e. it is useful in the treatment of almost all types of arthritis.