Depression and anxiety are very common in individuals with arthritis.

Plus arthritis symptoms and resultant immobility can reduce social interaction and add to depression.

Saffron is a natural antidepressant.

But in addition to its depression alleviating properties, it has been observed that saffron can help improving arthritis. It acts as an analgesic and an anti-inflammatory agent. Let’s understand this magical spice better.

Saffron is a spice derived from the flower of Crocus sativus which possesses crimson stigmas and styles. These are dried and used mainly as seasoning and colouring agent in food

It contains many pigments and active compounds such as picrocrocin, safranal. Crocin, etc.

Crocin imparts the rich golden-yellow hue to dishes and textiles.

Saffron has many uses as a therapeutic agent as well. It can act as an efficient antioxidant, vasomodulator and immunomodulatory agent.

It improves the healing process, strengthens bones and improves mood.

It is available in dried, a thread like a form, powdered form and also present in various oils\ for topical application.

It has been seen that saffron proves to be very beneficial in arthritis as it has anti-inflammatory, analgesic and immunomodulatory properties.

The means by which it helps in the management of arthritis would be discussed in the next section.

Proven Benefits of Saffron for Arthritis

Saffron can help in arthritis in several ways. Saffron is an excellent anti-inflammatory agent and thus helps in the pain, swelling, warmth, stiffness, etc. Saffron acts as an immunomodulatory agent in people who have diabetes and arthritis. It also is an effective analgesic and thus helps with pain related to arthritis. 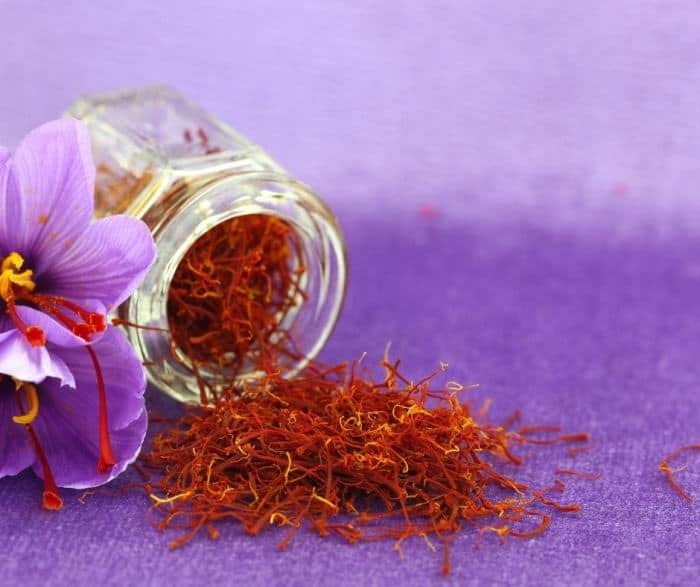 Saffron has been used for ages in traditional medicine to treat various conditions. You would be amazed to learn of the various awesome ways it helps arthritis patients in managing their condition.

1) Saffron acts as an anti-inflammatory agent

Crocin is the major active carotenoid present in saffron. It is observed to possess anti-inflammatory, antioxidant and antiproliferative qualities.

A study was conducted to observe the anti-arthritic and anti-inflammatory qualities of crocin by modulation of cartilage deteriorating enzymes and inflammatory mediators.

Cartilage degeneration is one of the characteristic features of progressive arthritis. Cartilage and synovium degeneration occur mainly via enzymatic and non-enzymatic pathways.

Several drugs have been used for arthritis treatment, but they have been reported to have severe side effects. Due to this, the need for natural supplements is increasing.

There was a significant reduction in NF-kappaB, prostaglandin, interferon six levels and cyclooxygenase expression.

Crocin revitalized the damaged cartilage and deteriorated bone along with a reduction in joint inflammation.

Thus, crocin can be an effective arthritic agent which can help reduce the secondary complications associated with arthritis.

A study was conducted to analyze the effects of crocin on the expression of various metalloproteinases in chondrocytes (cartilage cells) induced by interleukins.

It was observed that interleukin upregulated the expression of metalloproteinases in chondrocytes and this expression was inhibited by crocin in a dose-dependent manner.

It inhibited interleukin induced activation of NF-kappaB, which plays a major role in inflammation and therefore lead to a reduction in the inflammatory response.

Anti-inflammatory properties of crocin are therefore of significant therapeutic importance.

What does this mean? Saffron contains active compounds like crocin which modulate proinflammatory markers such as NF-kappaB, prostaglandins, interleukins, etc. and also regulate various inflammatory pathways such as cyclooxygenase thromboxane. Thus, a reduction in expression of these mediators leads to a significant reduction in arthritic inflammation.

When such an autoimmune condition strikes, the body’s immune system turns on itself and starts attacking healthy tissue and in the case of rheumatoid arthritis, the synovial membrane.

It has been observed that saffron has immunomodulatory properties. It helps in the regulation of immune system and can also act as an antimicrobial agent.

A double-blind placebo trial was conducted with healthy men with an average age of 21.

They were given one 100mg tablet of saffron daily for six weeks.

Blood serum levels of antibodies such as IgG, IgM, the percentage of white blood cells, platelets, lymphocytes, and other immunity parameters were measured, recorded and compared with the placebo group.

After three weeks, it was observed that saffron increased the levels of IgG, monocytes and lymphocyte levels. However, these parameters returned to baseline levels after six weeks.

No significant effects on other parameters were observed.

The results suggested that daily use of a 100mg tablet of saffron has temporary immunomodulatory effects without any major side effects.

Another study showed that as an anti-inflammatory and immunomodulatory agent, Crocus sativus modulates inflammatory markers, humoral immunity, and cell-mediated immunity.

It is also observed that aqueous extract of saffron is especially helpful to people who have diabetes.

Saffron can thus be used as an immunomodulatory in diabetic patients and for the prevention of vascular problems.

What does this mean? Saffron can be used as an immunomodualory agent in people who have diabetes and arthritis. It regulates the expression of immune system mediators such as IgG, IgM, lymphocytes, etc. It can be used for boosting immunity.

3) It acts as an analgesic agent

People who have arthritis suffer from joint pain.

It was observed that extract of the stigma of saffron and the active components present in it like crocin relieve neuropathic pain (pain caused by tissue injury or degradation) in animal models.

The effects of different doses of saffron on neuropathic pain induced by chronic injury were observed. Hyperalgesia (increased pain) was also measured if any.

There was a notable decrease in hyperalgesia after administration of saffron and crocin (30 mg/kg).

At low doses, crocin was ineffective.

These findings demonstrate that crocin and saffron can have therapeutic effects on neuropathic pain and can be explored as a potential agent for management of arthritic pain.

It is also observed that saffron helps reduce induced orofacial pain (pain felt in the mouth) in animal models.

This proves to be especially useful in people suffering from arthritic pain in joints of the jaw.

What does this mean? Active compounds present in saffron, such as crocin and safranal, provide analgesic effects in patients with arthritic pain. It can be used to alleviate neuropathic pain and orofacial pain and can act as a potential therapeutic agent for arthritis patients.

Atherosclerosis is a condition in which plaque deposits on the arterial walls and restricts the flow of blood, increasing the chances of heart attacks and strokes.

Premature cardiovascular disease is a major cause of death in rheumatoid arthritis patients.

Inflammation in rheumatoid arthritis and atherosclerosis are very closely linked.

An animal study was conducted to observe the antiatherosclerotic effects of crocin, the active compound in saffron, and its mechanisms.

The activities of various factors such as lactate dehydrogenase (LDH), nitric oxide (NO), etc. were measured using various assays after administration of crocin.

It was observed that crocin exhibited antiarthritic effects by decreasing the levels of these proinflammatory markers.

It inhibited nitric oxide synthesis in a dose-dependent fashion. It also had protective effects in endothelial cells (lining the inner surface of blood vessels).

It also suppressed the elevation of certain danger markers for heart disease and had vasodilatory effects.

These results showed that crocin reduced the progression of atherosclerosis and could prove to be of great therapeutic use for heart diseases.

What does this mean? Crocin, active compound present in saffron plays an important role in the initiation and progression of atherosclerosis and can help in treating this condition. It works by inhibiting various proinflammatory markers such as nitric oxide and can be used as a therapeutic agent in the management of arthritis associated atherosclerosis.

Dosage of Saffron for Arthritis

In the case of chronic conditions, it is advised to take 15 mg saffron, twice daily. This is the upper limit of dosage and doubling this may have a toxic effect on prolonged use.

For a single dose, 200mg of saffron is considered to be safe enough.

Saffron can be taken by having water infused with stigma extracts or using the dehydrated stigma itself. It can be taken twice daily in supplement form or foods as a spice or garnish.

High doses above 1200mg may cause nausea and vomiting. Therefore it is advised to consult a health practitioner before using.

If consumed in excessive amounts, saffron can cause various side effects such as vomiting, drowsiness, nausea.

Some more serious side effects include nosebleed, jaundice, vertigo. Pregnant and breastfeeding women are advised against excessive usage of saffron as it can cause complications.

No severe drug interactions have been recorded.

Saffron is a natural spice that is being used for ages in the culinary and medical industry.

It contains active compounds that give it various therapeutic qualities.

These active compounds like crocin and safranal act as anti-inflammatory agents by reducing the expression of proinflammatory markers.

They also act as analgesic agents by relieving neuropathic and inflammatory pain in arthritis patients.

Immunomodulation is another quality of these active compounds. They can mediate the level and expression of immunological markers and can also act as an antimicrobial agent.

Thus, it can be seen that saffron can be explored as a potential therapeutic agent for the treatment and management of arthritis and its various symptoms.