Arthritis is a pervasive disease condition characterized by pain and inflammation in the joints.

The two main kinds of arthritis are osteoarthritis and rheumatoid arthritis.

In certain cases, age and physical activity act as a trigger for the disease while in some other it arises as an auto-immune disorder.

A wide range of treatment options are available but all have certain ill-effects on prolonged exposure.

One such therapy finds its roots in China and the Far East and is commonly known as ‘Acupuncture’.

It involves the insertion of tiny needles at suitable points in the body, termed as acupoints, and then letting them stay for a stipulated period of time.

In some cases these needles can be electrocuted or else certain medication is applied to the needles before insertion into the body.

Amazingly, this therapy has been highly effective in relieving arthritic conditions like pain and joint swelling in a number of patients.

Thus due to this reason, it is one of the highly sought alternative therapy for arthritis.

How Does Acupuncture help in Arthritis?

Acupuncture is being used as a therapy for more than 2000 years now.

Just like the technique the history behind the development of this technique is equally interesting and unique.

As per the legend the technique was developed in China after some of the warriors found that arrows which struck at certain points in the body helped in curing some chronic symptoms.

This led to the identification of various different acupoints in the body to treat numerous health conditions.

According to the beliefs in Chinese medicine, our body is made up of two components named – yin and yang.

Diseases or any other health condition disrupts with the natural balance between both these elements thus affecting the flow of vital energy, known as ‘qi’ in the body. ‘

Qi’ is said to be concentrated at 12 major meridians of the body which represent 12 basic body functions. If this energy balance is disrupted it might lead to pain or other ailments.

On careful examination of the acupoints, it was found that most of these points fall near a cluster of nerves.

Placement of needles near these nerves than thus result in activation of these nerve fibres as experienced in the form of tingling, electrical sensations, and soreness by a number of patients.

Acupuncture is known to control pain in three ways:

It can also help in treating pain due to Rheumatoid arthritis.

Thus it could be used in conjunction with the medications to provide quick and effective relief from arthritic pain and inflammation.

It is, however, important to mention here that according to Oriental medicine, acupuncture needs to be combined with Chinese herb, exercise and dietary changes in order to experience best results.

Again every individual is considered to be unique in Chinese medicine.

Thus licensed practitioners always customize the treatment as per each individual on the basis of their symptoms, and lifestyles.

Thus it is quite common that two individuals might receive acupuncture therapy at entirely different points for the same disease condition. 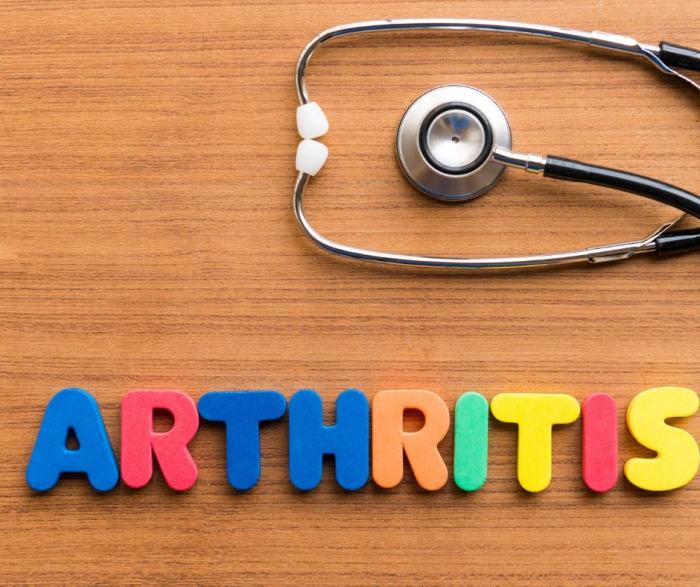 What does the research say about the use of Acupuncture for Arthritis?

A number of studies and clinical trials have been performed to study the effectiveness of acupuncture in treating various symptoms due to arthritis.

One of the longest and largest clinical trials was performed by researchers at the University of Maryland School of Medicine in Baltimore.

During the course of this trial, 570 patients suffering from knee osteoarthritis with an average age of 65 were recruited and divided into three random groups.

Each group was administered one of the following treatments for a period of 26 weeks along with the standard treatment:

By the end of the eighth week, patients in Group 1 showed the significant restoration in joint movement and pain reduction as compared to the other groups.

By the end of this study, the patients in Group 1 experienced an overall reduction of pain by 40% and improvement in function by 44 %.

This study thus proved that acupuncture in addition to the standard medication for arthritis could be extremely helpful for the patients.

Quite recently the effects of electro-acupuncture were studied for the treatment of knee osteoarthritis. The experimental group comprised of 42 patients between the ages 41 to 63.

Half of the treated individuals were administered electro-acupuncture along with the surgery while the other half formed a control group.

All the patients were followed up for an average of 15.6 months after therapy and the group receiving electro-acupuncture in combination with arthroscopic debridement showed better improvement and more motor functions than the control group.

This study thus proved the effectiveness of various types of acupuncture in treating chronic cases of osteoarthritis.

Another study designed to learn about the sustained effect of acupuncture therapy on patients with arthritis provided encouraging results.

This study looked into the clinical efficacy of acupuncture treatment over a sustained time in patients with knee osteoarthritis. 193 patients participated in this trial.

Subjects were administered immediate or delayed acupuncture therapy and the clinical symptoms were then administered after four or eight weeks’ time after treatment.

Results from this study showed that acupuncture is highly effective in improving disease symptoms in osteoarthritis and the improved functioning continues even after 4 weeks of treatment termination .

In fact, research shows that acupuncture is not just responsible to improve symptoms of knee osteoarthritis but has also been found to be of help in treating other forms of arthritis.

A recent study explored the effect of acupuncture on secondary osteoarthritis in spinal cord injury patients.

The patients in this study were divided into two groups- one receiving the western medicine for the condition and other receiving therapy along with acupuncture for a duration of 3 months.

The bone mineral density and serum concentrations of IgM, IgG, and TNF-alpha were measured both before and after the treatment.

At the end of the trial, it was found that the group receiving acupuncture in combination with conventional medicine showed a greater reduction in levels of IgM and TNF-alpha as compared to the other group.

Also, a slight improvement in the bone density of this group was observed thus proving its effectiveness in improving the symptoms of the disease condition among patients.

Similarly, a 2012 report showed that acupuncture is helpful in treating neck and back pain among the patients.

A review by the Agency of Healthcare Research and Quality found that immediate use of acupuncture can help in relieving lower back pain.

However, this therapy was not found to be effective over longer periods of time.

A Ph.D. student at the University of Michigan Medical School conducted a trial on 20 women with fibromyalgia to test the effectiveness of acupuncture in relieving the pain.

Results from this study showed that acupuncture increased the activity of pain-killing receptors in the brain of the patients thus relieving the pain in the body.

Hence all these studies prove that acupuncture is a highly effective alternative therapy for arthritis and can be used in combination with conventional medicines to get better results.

How is it performed and which type of acupuncture could be effective?

The technique of acupuncture involves the insertion of thin needles into the body.

It is important to mention here that it is not mandatory to place these needles over the affected area.

In fact, the acupoints might be located at any place all over the body of the patients like the arm, shoulder, leg or toe.

This technique enables the patient to relax their mind and body and thus patients are always positioned in a comfortable position before the procedure begins.

The skin is cleansed with alcohol before the insertion of needles.

After which thin needles are placed at the points about 1-2 cm deep into the skin.

After insertion of the needles patients are asked to relax for a stipulated period of time. During this time the needles are stimulated by the practitioner.

This stimulation can occur either manually or by using an electric current of warming lamp.

The number, length, and frequency of these sessions vary according to the severity of the disease condition of the patient.

Generally, these sessions last for about 5-30 minutes .

The procedure is comparatively painless. Patients just feel slight tingling sensation and soreness due to the needles.

But overall the benefits are quite significant. This is a drug-free means to minimize pain and improve joint function in arthritis. Thus it is free from harmful side effects.

The traditional acupuncture simply involves the insertion of needles at specific points.

But equal benefits have been obtained from electro-acupuncture which uses stimulation using electric currents among the patients.

Sujok Acupuncture is another branch of acupuncture used in modern times which is based on the concept that human hand and feet carry points pertaining to every part of the body. For example; our thumb and big toe represent the head.

Thus this technique uses the points present in the hands and feet to cure disease symptoms.

Similarly, ear acupuncture considers ear to be a replica of body parts, head acupuncture places needles in the scalp to treat disease symptoms while laser acupuncture stimulates the needles using a laser beam.

Thus many branches of acupuncture exist but not much has been reported regarding comparisons between these in treating arthritis.

Hence it is advisable that the patients choose the traditional form of acupuncture initially and then switch the branches if necessary or recommended by the practitioner.

It must be noted here that acupuncture is an approved therapy in many parts of the world including the US. Thus patients must always make sure that they visit a certified practitioner for therapy.

Generally, acupuncture is an extremely safe technique and not many side effects have been reported in the literature.

Some common side effects include mild aching, redness or bruising at the site of needle insertion, occasional nausea or light-headedness after the therapy.

However certain serious consequences might arise if it is not delivered properly.

In the case of human error, severe consequences like punctured organs, CNS injury or collapsed lungs could occur.

Hence patients must always consult a licensed practitioner for this therapy.

Again it is important that the needles used for the procedure must be sterilized and that they are discarded after a single use.

If this is not followed then patients might suffer from serious infections and disease symptoms.

Thus one must make sure that the needles used during the procedure are properly sterilized.

The procedure of electro-acupuncture is not advisable for patients with a history of seizures of cardiovascular disorders.

Also, people who take blood-thinning drugs must avoid this therapy owing to certain complications that might arise.

Acupuncture is one of the oldest therapy known to mankind to fight against pain.

It has been shown to be highly effective in treating symptoms of arthritis.

Patients with various forms of osteoarthritis, fibromyalgia and rheumatoid arthritis have shown a significant reduction in pain and improvement in joint mobility after acupuncture therapy.

In fact, the positive effects of this therapy last for a substantial amount of time as well.

Thus Chinese acupuncture is an effective therapy to be tried in conjunction with western medication to subside pain due to arthritis.