The arthritic condition can be of many types and amongst the most common type is rheumatoid arthritis.

This type of arthritis comes under the category of autoimmune diseases.

In this arthritic condition, the immune system of the body mistakes its own cells and tissues as foreign and begins attacking them.

The immune cells start to build antibodies against these tissues and cells and release them into the blood where they reach the target site and start the immune attack.

This leads to inflammation at the affected site and the most common attacked tissues are the joint tissues.

The causes for this autoimmune response include hormonal changes, bacterial or viral attack and inheritance of certain genes.

The typical symptoms of rheumatoid arthritis are soreness, stiffness, swelling and redness around the affected joints.

What is Willow Bark?

Willow bark comes from the willow trees which come under the Salicaceae family.

The willow tree first originated in China and eventually spread across the other continents.

This tree is usually found near the temperate area which has enough moisture.

There are many varieties of willow tree like white willow, black willow, crack willow, etc.

The bark obtained from any of these types of the willow tree is called willow bark.

This bark has been observed to contain several medicinal properties and people have been taking it as a treatment for many centuries.

The bark of this tree is known to have pain relieving and anti-inflammatory properties. Hippocrates was among the first to advise his patients to chew on willow bark for pain relief and inflammation.

The willow bark is known to contain a compound known as salicin. This compound has a similar action as that of aspirin, thus it is used for relieving pain in a natural way.

The chemical in aspirin, acetylsalicylic acid, is similar to salicin. It has been reported in very few studies that willow bark can be used as a potential treatment for rheumatoid arthritis.

But the properties of the salicin compound point out that it could be a potential treatment for arthritic problems. 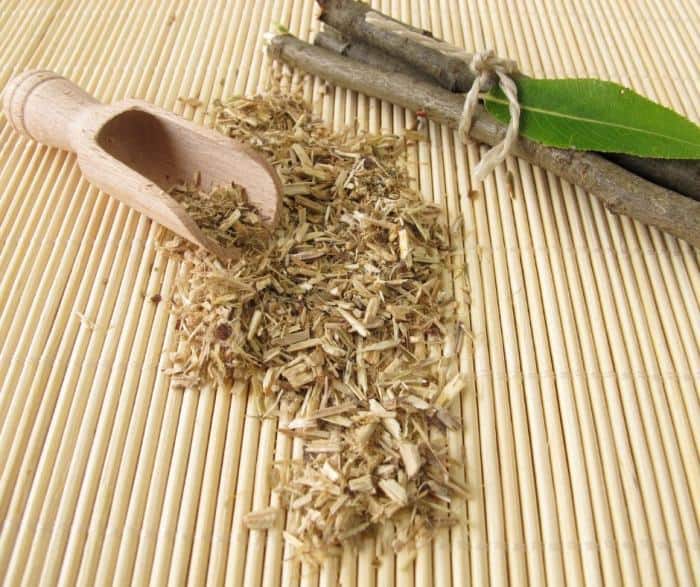 The inflammation in the rheumatoid arthritis disease is mainly controlled by up regulation and down-regulation of certain genes and proinflammatory factors.

The main factor which is involved in this inflammatory process is the NF-kB (nuclear factor kappa B-activation factor for uncontrolled growth of cells) factor.

The activation of this factor triggers other inflammatory mediators and inflammatory pathways which cause inflammation.

Willow bark being a good anti-inflammatory agent is able to down-regulate and inhibit the activation of the NF-kB factor.

This suppression in the expression of this factor downregulates other inflammatory mediators and slows down inflammation.

The active ingredient in willow bark-salicin is further converted to salicylic acid in the body on consumption.

This substance is similar to acetylsalicylic acid (aspirin) and plays an important role in the reduction of the inflammation.

This compound down-regulates the production of prostaglandins which are the substances that have the ability to control the immune system and are involved in inflammation.

The reduction of the prostaglandins leads to easing of pain and reduction in inflammation.

A study was conducted on patients suffering from pain in the back.

All in all 210 people suffering from back pain were divided into three groups namely a placebo group, lower dose group, and a higher dose group.

The groups receiving willow bark extract reported a decrease in the pain.

Although the number of people reporting relief from pain was not very significant, there were many people who reported being pain-free after intake of the willow bark extract.

The group receiving the lower dosage of willow bark extract reported that 21% of the individuals became pain-free after regular consumption of the extract.

Moreover, the group receiving the higher dosage of willow bark extract also reported that 39% of the patients reported relief from the pain in the back.

This study supports the fact that willow bark has the ability to relieve pain caused due to medical conditions.

During the progression of rheumatoid arthritis, the inflamed tissues cause pain due to soreness and stiffness of the joints.

If the willow bark has the ability to act as a pain reliever, the extract of this bark can probably be used for relieving pain caused due to rheumatoid arthritis.

Another study was conducted by a certain research group on patients suffering from osteoarthritis and rheumatoid arthritis.

These patients complained of pain caused due to inflammation.

The pain index of all these patients was studied and compared during the trails.

The group which was given the willow bark extract and had osteoarthritis reported a 17% decrease in the pain while the diclofenac was able to reduce the pain by 47%.

The patients suffering from rheumatoid arthritis and given willow bark as treatment reported 15% reduction in pain.

Although the reduction in pain in both types of arthritis on treatment with willow bark was less, the results do show that the willow bark offers a modest level of relief from pain caused due to inflammation.

How to take Willow bark in diet

The bark of the willow tree can be taken in many forms.

The most common form in which it is taken directly. The bark is dried and some amount of it can be taken and chewed. Chewing this bark regularly can benefit in numerous ways.

This bark can also be dried and powdered which can be sold. The powdered bark is available in the market can be added to herbal or decaffeinated tea to enjoy the benefits.

The powder can also be added to boiling water, strained and taken regularly. This tea can also be used as a mouthwash and it can also be applied directly on the wounds or affected region.

The powdered bark can also be added to dough’s and other food items to take it regularly in diet.

There are capsules of the willow bark extract available in the market which can be taken as advised by the doctor.

The willow bark extract is also available in the form of fluid extract and tincture which can also be taken for treating and relieving pain caused due to arthritic conditions.

The form in which one prefers to take this herb can be taken as per preference.

It has been observed that the consumption of willow bark may cause harm to children as there are chances of developing Reye syndrome.

Thus, it is not advised for children below 16 to take willow bark.

For adults, the dried herb form of this bark can be taken in the form of tea by boiling 1 to 2 tablespoons of powder in about 8 ounces of water.

The powdered herb can be taken up to 60-240mg regularly. The tincture form can be taken ranging from 4 to 6ml up to 3 times a day.

There are certain precautions which should be maintained while taking willow bark for a medicinal purpose.

It is advised that people suffering from stomach ulcer, gout, asthma, gastritis, diabetes and gastritis should not take the willow extract.

In addition to this, it is also advised to people who are allergic to aspirin to not to take willow bark.

Pregnant and breastfeeding women are also not advised to take this herb. Moreover, combining this herb with other conventional medication can alter the mode of action of these medicines and may cause harm.

Thus, it is always advised that one should consult a doctor before taking willow bark as a treatment .

Willow bark obtained from willow tree is known to have many medicinal properties like pain relieving and anti-inflammatory.

These properties can be utilized to treat the rheumatoid arthritis condition as it can reduce inflammation and pain caused due to it.