Since they have similar symptoms, rheumatoid arthritis can be easily confused with ankylosing spondylitis.

Both of them involve inflammation of the joints.

They may seem similar, but they are very different from each other.

What is rheumatoid arthritis?

Rheumatoid arthritis is characterized by the inflammation of various joints of the body.
It is a systemic disease.

This means that it may affect multiple joints at a time instead of a particular region of the body.

It is the most common type of autoimmune arthritis. Autoimmune diseases are a result of the improper functioning of the immune system due to unknown reasons.

What is the immune system?

The immune system is the defense system of our body which is responsible for killing the foreign bodies that enter into the human body.

When it starts attacking the person’s own body cells due to some mistake, it can lead to disastrous effects on the body.

What happens to the body in rheumatoid arthritis?

Rheumatoid arthritis is one such disease of the musculoskeletal system.

In this, the immune cells along with the antibodies target and attack the tissues present in between the joints. The tissues mainly include cartilage and synovial fluid.

This leads to the degeneration of these tissues, which makes the joint loose. In severe cases, the tissues may even wear off completely.

This causes the bones to rub against one another and so the joint swells.

If it continues to persist for a long period of time, this disease can destroy the functioning of the body joints and cause chronic pain.

The most affected areas are the joints of the hand including wrists, knuckles, and fingers.

We still do not know the exact cause of rheumatoid arthritis. Researchers are still trying to figure it out. However, some factors may trigger this disease.

The risk factors for rheumatoid arthritis may be:

Genetic factors – The family history involving the genes passed on from one generation to another plays an important role in determining whether a person will suffer from rheumatoid arthritis or not.

Smoking – Smoking has been found to be associated with the production of various kinds of autoantibodies, which are the antibodies responsible for killing the body’s own tissues.

Age – The risk of rheumatoid arthritis increases with the advancement of age.

Gender – Women are at a higher risk of developing rheumatoid arthritis than men. Menopause may also affect the onset of this disease due to the hormonal changes.

Silica – Exposure to silica may lead to the development of rheumatoid arthritis among people who inhale silica fumes on a regular basis.

What are the symptoms of this disease?

The disease can be diagnosed using several methods. Some of them are –

Family history – The medical history of a person’s family helps in determining the chances of rheumatoid arthritis.

Others - X rays, ultrasound and MRI (Magnetic Resonance Imaging) also help in the diagnosis of this disease.

How can Rheumatoid arthritis be treated?

This disease can be cured if treated at its early stages.

The majorly practiced treatment methods include –

Rest – Resting the joints allows the body to heal and prevents rheumatoid arthritis from spreading any further.

Exercise – Light exercise is recommended so that the joints do not become stiff.

Diet – A healthy diet comprising of high amounts of nutrients such as calcium and vitamin D help to regenerate the lost bone tissue. Other food items which are high in proteins, fiber and minerals and low in fat should be taken.

Rheumatoid arthritis is considered as a disease which has no permanent cure.

Although various treatment methods can be practiced by people, the truth is that they only provide temporary relief and suppress the symptoms instead of treating it permanently. 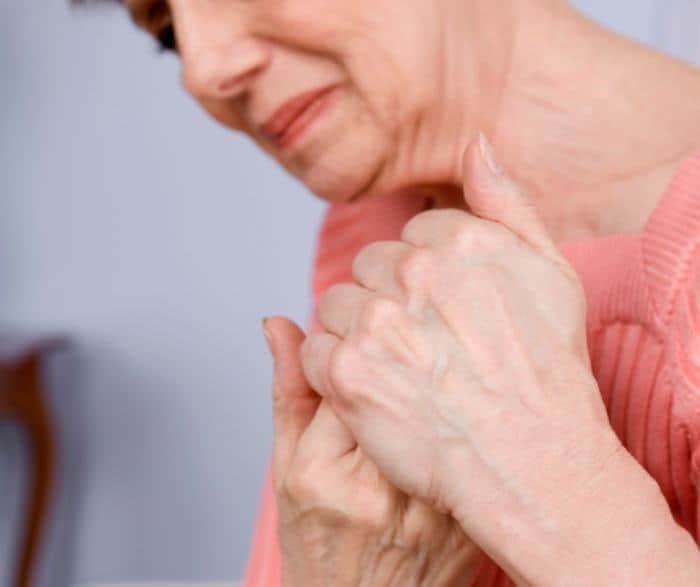 What is ankylosing spondylitis?

Inflammation of the joints of the vertebral column is known as spondylitis. It is a type of osteoarthritis of the spine.

Osteoarthritis is a rheumatic disease (affects the joints and muscles of the body) in which the tissues present between the joints degenerate.

Ankylosing spondylitis is a form of arthritis which only affects the spine and the sacroiliac joints.

These joints are present in the pelvis and provide support to the spine.

They connect the sacrum (a triangular shaped bone near the base of the backbone) to the ilium (a part of the hip bone) in the pelvis.

What actually happens in Ankylosing spondylitis?

The spine in the human body is made up of a number of bones stacked one on top of the other.

It is a part of the axial skeleton.

In this disease, the bones of the vertebral column fuse together.

This makes the spine stiff and it becomes difficult to bend the back. The bones join because the disease causes an overgrowth of the vertebral bones.

It is due to this abnormal growth of the backbone that spondylitis causes a lot of pain in the back.

This disease is a chronic systemic disease.

Like rheumatoid arthritis, Ankylosing spondylitis can also affect multiple joints at a time.

It mainly affects the ligaments and tendons near the joint and may cause them to swell up.

Who is more prone to Ankylosing spondylitis?

Various studies have found that it has higher chances of occurrence in men, mainly in their youth than in women.

What are the symptoms of this disease?

The major symptoms are:

Can ankylosing spondylitis lead to other diseases?

Spondylitis can pose as a risk factor to many diseases.

The most common health problem caused by this is a slipped disk.

Lung problems arise as this disease causes difficulty during respiration. This happens because the ribs are affected and cause chest pain while breathing.

Heart diseases may also develop due to Ankylosing spondylitis in severe cases.

Ankylosing spondylitis can be diagnosed by various methods including physical examinations, laboratory tests and X rays.

How can it be treated?

Even though this disease has no permanent cure, several options to control the symptoms are available:

Physical activity - Regular light physical activity such as walking, swimming and simple breathing exercises reduce the stiffness and allows the spine to regain its flexibility to an extent.

Posture – In order to have a better functioning and a balanced body, a good posture is essential.

Physiotherapy – Also known as physical therapy, this method involves the use of devices to promote mobility of the joints of the backbone. It helps in lowering the chest pain.

Anti TNF therapy – Studies have found out that this therapy improves the working of the body along with the productivity of the person.

Surgery – In severe cases, the joint may need to be replaced with an artificial joint.

Now that we know about both these diseases, we can see that they have many similarities as well as differences.

These have been summarized in the following sections:

How RA and AS similar?

Both the diseases are very similar in terms of their symptoms.

These include pain in the affected area, stiffness, fatigue or the feeling of tiredness, nausea, discomfort, and disability or difficulty in the movement of joints.

Rheumatoid arthritis, as well as ankylosing spondylitis, is induced by genetic factors.

They are transferred to people through their genes, that is, they are hereditary diseases.

However, the genes which account for each of these diseases are different.

They are both rheumatic diseases. This means that they evoke pain in the joints and tissues of the body.

Erosion or degeneration of the tissues lining the bones of the joint takes place in both of these health conditions.

Spondylitis is a form of arthritis too. The difference is that spondylitis affects the vertebral column while rheumatoid arthritis can affect any part of the body.

What is the difference between the two?

Rheumatoid arthritis affects people belonging to older age groups (between the ages 40-50) whereas ankylosing spondylitis generally affects younger people (teenagers or those in their twenties and thirties).

Rheumatoid arthritis is more common in women but ankylosing spondylitis is common among men.

Studies have observed that ankylosing spondylitis affects around twice as many males as compared to females.

Ankylosing spondylitis involves the axial skeleton which consists of the bones of the head and trunk of the body.

Rheumatoid arthritis mostly affects the joints of the limbs which are present at the extreme ends of the human body.

In ankylosing spondylitis, the entheses (the site where the tendon inserts into the bone) swells up.

Rheumatoid arthritis causes the lining of the joint consisting of mainly cartilage and synovium to inflame.

Ankylosing spondylitis is associated with the HLA-B27 antigen. Rheumatoid arthritis can be linked with either HLA or non-HLA antigen.

Ankylosing arthritis causes chest pain or pain while breathing because the ribs are connected to the backbone.

This does not happen in rheumatoid arthritis.

Rheumatoid arthritis has a higher risk of mortality or death among people than those who are suffering from ankylosing spondylitis.

However, this happens only in cases which are severe.

In order to prevent this, the joint can be replaced through surgery in both the diseases.

Most of the patients suffering from these diseases are not able to differentiate between rheumatoid arthritis and ankylosing spondylitis.

Despite the category of medicines being the same in both cases, the areas of the target are very different.

Using the wrong treatment methods could lead to undesirable results. Hence they should be diagnosed properly.

Studies have found that rheumatoid arthritis and ankylosing spondylitis may even coexist in the same person at the same time.

Awareness among people is necessary in order to treat both diseases effectively.