Osteoarthritis also known as “degenerative arthritis” is the most common form of arthritis affecting over 20 million patients in Unites States.

It mainly affect people in their old age mostly at the age of 65, leading the main cause of joint disability in this age group.

It causes pain, swelling and reduce movement in joints.

Pomegranate (Punica granatum L.) which belongs to the family of Punicaciae is native to Asia and widely cultivated fruit all over the world.

Pomegranate prefers mainly semi-arid temperature to subtropical climate and are naturally adjusted to the regions of cool winters and hot summers as the fruit does not prefer humid climate.

The pomegranate fruit is nearly round in shape with leathery tough skin containing juicy, sweetly acidic arils (pink or whitish pulp seeds) packed within the sacs like compartments.

Studies have shown various components of this fruit contains bioactive compounds such as polyphenolic, anthocyanin, and flavonoids having antioxidant properties.

Pomegranate was also reported to have antibacterial and antiviral properties and therefore it is promoted as a ‘superfood’ by health experts.

This fruit has marked its importance in Ayurveda from ancient times as a folk medicine where all parts of the pomegranate tree including bark, root, fruit, seed, and rind have medicinal uses.

Pomegranate fruit is one of them having antioxidant and anti-inflammatory properties and hence they are used by many health professionals in the treatment of a variety of disease such as in osteoarthritis.

Researchers believe that these flavonoids present in pomegranate helps to reduce the inflammation and pain which happens due to the destruction of joint cartilage in osteoarthritis.

Pomegranates are high in vitamins like C, K, B5, and minerals such as manganese, magnesium, potassium, calcium, zinc, and iron.

The fruit provides overall 130-150 calories where seeds are believed to have high calorie of 105 as they are rich in unsaturated oils, sugar, and carbohydrates.

But seeds are also rich in their fibre content and protein.

Similar like pomegranate fruit, its juice also poses high content of antioxidants (polyphenols) which play important role in fighting against free radicals produced in the body due to oxidative stress such as in arthritis patients, reducing the symptoms of inflammation and joint pain.

Therefore researchers believe that polyphenols such as ellagic and punicalagin are majorly responsible for pomegranate antioxidant activity.

Polyphenols are secondary metabolites synthesized by plants mainly as a part of the defense mechanism against foreign particles or external stress factors. 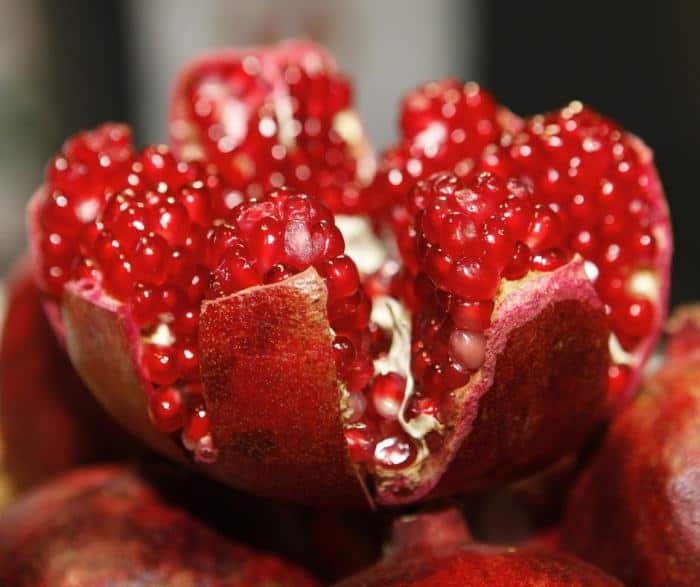 In one experiment, the study was carried out to detect the chondroprotective effectiveness of pomegranate juice on osteoarthritis.

Chondroprotection is a set of activities which helps to delay, prevent or repair degenerative joint injuries.

In this experiment mono-iodoacteate (0.1mg) which act as glycolysis inhibitor and osteoarthritis, inducer was used to cause damage to articular cartilage in the mouse model.

Subsequently, histopathological changes in mouse knee joints were studied on 1, 14 and 28 days after mono-iodoacetate injection was given.

At the same time, the effect of pomegranate juice (4ml/kg, 10mg/kg, 20mg/kg) was noted which was given orally.

The result showed that administration of pomegranate juice prevented the harmful effect of mono-iodoacetate, preventing chondrocyte damage, causing no cell inflammation or proliferation in synovial fluid and causing less damage to proteoglycan contents of cartilage tissue.

And this positive effect of juice by reducing all the symptoms of osteoarthritis was found to increase with increasing dose of pomegranate juice.

Another study indicated, pomegranate extracts (PE) and PE –derived compounds act as a MKK and p38-MAPK inhibitors thus playing an important role in the treatment of osteoarthritis and other degenerative/inflammatory diseases.

p38-MAPK are the members of MAPK (Mitogen –Activated Protein Kinase) family that are activated by some environmental stress factors and inflammatory cytokines which play a key role in expression and production of several mediators of cartilage catabolism and thus play important role in pathogenesis of osteoarthritis.

Hence inactivation of MAPK pathways by PE and its compounds showed that PE helps in cartilage protection and poses arthritis inhibitory effect.

It was also highlighted in one study, pomegranate fruit extract (PFE) inhibited the production and functioning of cyclo-oxygenase (COX) enzymes, which are key mediators for inflammation in osteoarthritis, muscle and ligament injury.

PFE is also reported to involve in inhibition of enzymes called metalloproteinases (MMPs) which play a key role in progression of osteoarthritis disease.

MMPs are tightly regulated enzymes which are necessary for tissue remodelling but when they are overproduced in some diseases like osteoarthritis they result in degradation joint cartilage causing damage to it.

Thus it was noticed that pomegranate extract has one more crucial role in preventing the symptoms of osteoarthritis, namely cartilage protection.

Cartilage is a coating on bone that helps them to slide smoothly and function properly.

And osteoarthritis is a type of disease which causes majorly breakdown in cartilage tissue causing pain, inflammation and disability.

Hence protection of these cartilage by pomegranate extracts by inhibiting the actions of degrading enzymes plays crucial role in reducing the harmful effects of osteoarthritis.

A group of studies were conducted to explore the effects of pomegranate on the pathogenesis of bone loss in number of bone disorders such as osteoporosis, osteoarthritis and rheumatoid arthritis.

It showed remarkable result where all studies concluded the positive effect of pomegranate or its juice on osteoporosis, osteoarthritis and rheumatoid arthritis thus indicating, pomegranate and its juice can be effectively used in treating bone loss conditions.

We have seen number of experiments and studies, which showed remarkable anti-oxidant property of pomegranate fruit and its juice, but along with them it is also observed that pomegranate seed oil is becoming popular and proving its beneficial effects too in arthritis treatment.

Pomegranate seed oil is an oil extracted from seeds of pomegranate which is extremely rich and nutritious.

It has number of cosmetic and medicinal properties where it can be used for internal or external purpose.

Pomegranate seeds are also found to be a good source of vitamins (C, K, and E) and various minerals like calcium, magnesium, manganese, iron, and zinc.

It was observed in vivo and vitro studies, the major component present in pomegranate seed oil (PSO) is punicic acid which poses potent anti-inflammatory and anti-oxidant properties.

In this study, the bone mineral density in test animal was found to increase when their diet was supplemented PSO (5% of the diet) as compared to control animals.

The data collected in this study also indicated that PSO was responsible in inhibition of pro-inflammatory factors expression and stimulated anti-inflammatory expression.

Thus it was concluded from the following set of experiments that PSO has also promising effects like pomegranate and its juice in decreasing the age-related bone problems which are the main signs of osteoarthritis and other types of arthritis disease.

How to include pomegranate in diet

Pomegranate is one of those complicated food to eat which contain pockets of tasty arils inside the edible flesh covered by outer hard skin.

Even though it requires little hard work to removes these arils from fruit skin, still everyone loves to eat it.

As I have mentioned above, because of its various health benefits they are considered as superfoods.

There are a number of ways to add pomegranate to your daily diet. You can use them in morning breakfast, for afternoon quick lunch or with a sweet dish at night by using these simple tips:

There is no standard consumption dose for pomegranate and eating fruit or drinking its juice as a part of healthy diet like other fruits is normally considered safe.

So around 4 - 6 ounces of juice daily is considered safe for adults.

But when it comes to children and pregnant women, it is best to take advice from doctor or health professional especially when it is pomegranate extract.

Pomegranate juice is available in liquid form and it is recommended to drink 100% sugar free packed fruit juice.

Whereas pomegranate extract is available in powder, pill or capsule form.

Pomegranate juice has the potential to interact with different types of drugs used for the treatment of various disease.

Some of the drugs which can interact with pomegranate juice are such as:

Typically the symptoms of osteoarthritis and other types of arthritis conditions are usually treated by using non-steroidal anti-inflammatory drugs (NSAIDs) which unfortunately are believed to have side effects like gastric ulcers.

But unlike NSAIDs medicine, pomegranate fruit extract, its juice, and pomegranate seed oil has no such side effects and are considered to be safe and non-toxic.

Thus proving that pomegranate can emerge as a potential new treatment in osteoarthritis.