Rheumatoid arthritis is an autoimmune disease. This arthritis is caused as a result of an attack by one’s immune system on the tissues of the joints.

The immune system attacks the synovium (the protective covering of the ends of the joints) and progresses to degrade the cartilage.

Anti-arthritic drugs have many side-effects, and many of them tend to lose their effectiveness after some time.

Therefore, need for an effective treatment through natural remedies is felt.

One of the natural remedy considered for rheumatoid arthritis is pomegranate. Pomegranate (Punica granatum) is a fruit indigenous to Iran and cultivated throughout the tropical, semi-tropical and Mediterranean regions of the world.

The diverse nutrient content of pomegranate has strong efficacy in rheumatoid arthritis. The anti-inflammatory and antioxidant potential of this fruit is capable of alleviating the pain and inflammation related to this disease.

Some of the components also have the ability to protect bones from degradation. 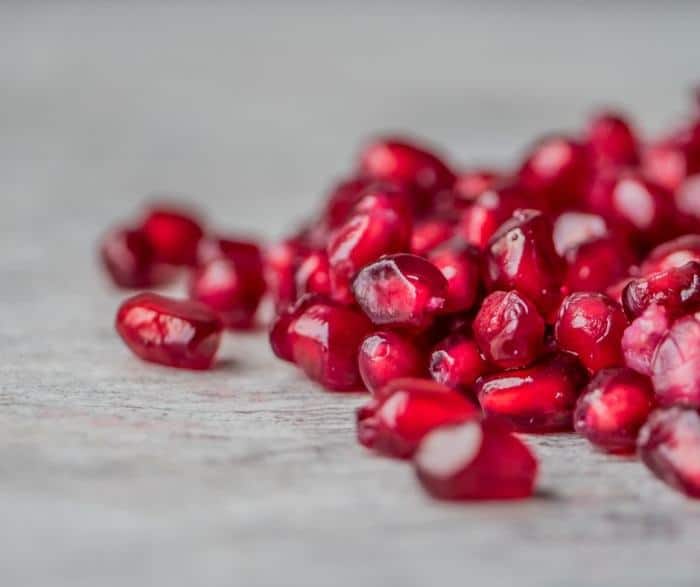 Inflammation is the main attribute of rheumatoid arthritis. Various pro-inflammatory molecules are involved in the inflammatory response in the synovium.

Pomegranate extract can reduce the levels of these pro-inflammatory molecules.

In a study, the tannins present in this fruit extract were shown to inhibit pathways that lead to the production of such molecules in the case of rheumatoid arthritis in rats.

Punicalagin (a type of tannin) from pomegranate has been found to have a strong anti-inflammatory action against many of the pro-inflammatory molecules.

Its mechanism of action is again by the suppression of many inflammations producing pathways.

The pomegranate extract has also been shown to reduce inflammation in human chondrocytes (cartilage cells) by inhibition of COX2 enzyme and prostaglandin E2 synthesis.

In a study of rheumatoid arthritis patients, pomegranate extract was found to improve the concentration of inflammatory markers in the blood.

The inflammation and pain reduced markedly.

There was a decrease in swelling, tenderness and morning stiffness of the joint. There was also an increase in the levels of glutathione peroxidase (a free radical quenching) enzyme.

What does it mean? It means consumption of pomegranate is beneficial in reducing the inflammation and pain related to rheumatoid arthritis. The polyphenols, especially the tannins of pomegranate have strong anti-inflammatory action.

2. Pomegranate has natural antioxidants that help in arthritis

The role of oxidative stress is predominant in the development of rheumatoid arthritis.

The excessive production of reactive oxygen species (ROS) results in the destruction of the cartilage.

There is a decreased level of anti-oxidants in the body of rheumatoid arthritis patients.

External supplementation of antioxidants is helpful in overcoming the oxidative stress.

It has been found in the studies that antioxidants from pomegranate extract can improve the symptoms of rheumatoid arthritis.

The antioxidant activity of pomegranate is not limited to its juice. The seeds and the peel possess strong antioxidant potential as well.

The pomegranate polyphenols have been found to reduce oxidative stress by increasing the activity of some free radical scavenging enzymes of the cells, through activation of some genes.

What does it mean? It means dietary supplementation of pomegranate can increase the body’s effectiveness in combating oxidative stress. The synergistic action of the anti-oxidants present in this fruit has strong capability of reducing the oxidative stress in rheumatoid arthritis. Thus, it is beneficial in improving the symptoms of the disease and can
prevent it too.

Loss of bone is the most detrimental feature of rheumatoid arthritis. The main cause of bone loss is cartilage destruction besides many other reasons.

Pomegranate has been found to be a potent agent against bone loss.  It has been shown to prevent cartilage destruction in rheumatoid arthritis affected rats by its anti-inflammatory action.

The polyphenols of pomegranate are effective in preventing cartilage degradation. It does so by inhibiting the action of collagenase (a collagen-destroying enzyme) on collagens (cartilage proteins).

What does it mean? It means pomegranate can prevent the bone loss associated with rheumatoid arthritis. Its anti-inflammatory action and the ability to inhibit collagen-destroying enzymes protect the bone by saving cartilage from degradation.

4. Pomegranate extracts have a pain relieving the effect

In the animal models, pomegranate seed oil has been found to exert antinociceptive (pain reducing) effect.

There have also been findings that topical application of the extract of pomegranate rind has strong pain-killing action.

This action was due to modulation of pro-inflammatory cytokines like TNF-α and IL-β in addition to inhibition of leukocyte infiltration,i.e. decreasing the number of leukocytes in the blood.

What does it mean? It means the application of pomegranate seed oil or pomegranate peel extract on the affected area can be useful in reducing the rheumatoid arthritis pain.

5. Pomegranate can protect from drug side-effects

The side-effect of drugs used for the treatment of arthritis is well known. The use of NSAIDs often causes gastric ulcers and many other such problems.

Studies have shown pomegranate to be effective against the side-effects of such drugs.

In a study, pomegranate juice has been found to protect mice from liver damage caused by paracetamol (a widely used painkiller).

The liver tissues were protected from the damage and the level of thiobariburatic reactive substances (an indicator of oxidative stress) in blood was found to be significantly lower.

This indicated the protective effect of pomegranate juice.

In another study, the pomegranate extract rich in ellagitannins showed protective effects against the gastric injury and lesions caused as a side-effect of NSAIDs.

What does it mean? It means consumption of pomegranate is very helpful in protecting our body from the side effects of common drugs used in the treatment of rheumatoid arthritis.

How to take pomegranate in diet

Pomegranate fruit is easily available in the market nowadays. This fruit can be eaten by peeling of the external skin and eating the reddish pink seeds inside.

These seeds can be added to fruit salads and enjoyed. The seeds of pomegranate are also added to food items for flavor and used as garnishing on food items.

The juice obtained from these seeds can also be taken regularly for a healthy lifestyle. The juice can be either obtained from fresh fruits or from packaged fruit juices.

Other parts of pomegranate tree can also be consumed like leaves, stem and bark.

These can be eaten directly or in the form of extract.

The extract of pomegranate is also available in the market which can be taken under the supervision of a health advisor. The extract is available in various forms like powder, capsule, and pill.

The important flavonoids found in the pomegranate plant can be found in flavored herbal teas.

These teas can be taken regularly or the extract of the pomegranate can also be added to the herbal or decaffeinated tea for health purposes .

Dosage of Pomegranate For Arthritis

Pomegranate is a versatile fruit which can be eaten as it is or taken in a juice form. It can also be included in a variety of dishes like salads, desserts, etc.

Pomegranate extracts are available in the form of capsules, pills or powder. Teas flavored with pomegranate juice can also be taken.

Pomegranate is a safe food product for regular consumption. Still, there may be some adverse effects due to many other factors. Therefore, some precautions must be taken.

Excessive consumption of pomegranate may cause the gastrointestinal disorder -  Pomegranate can upset stomach causing vomiting or diarrhea when taken in large amounts.

Pomegranate should not be taken with a few medications -  In case one is on medications such as warfarin (blood thinning drug) or drugs for blood pressure, one must consult a medical expert before consuming pomegranate. Pomegranate nutrients may interact with these medicines and cause adverse effects.

Pomegranate is a very valuable fruit for the treatment of rheumatoid arthritis.

The synergistic action of the various nutrients of this fruit is capable of reducing inflammation and pain. It is also effective in preventing cartilage destruction.

The overall effect of pomegranate is helpful in improving the symptoms of rheumatoid arthritis. It is also useful in preventing or delaying the onset of this disease in healthy individuals.