Fibromyalgia is a chronic condition that causes pain and tenderness in the muscles.

It is a neurological disorder which the pain tends to appear and disappear in some regions of the body or over the entire body.

It is not caused by autoimmune, inflammation and muscular conditions.

The pain is caused by stimulation of nerve cells and increases in levels of pain signaling chemicals from the brain. Over time the muscles become over sensitive to these signals.

These symptoms can limit one’s abilities and affect the quality of life.

The causes of this condition are unclear, but it is believed that stress, trauma, injuries or genetics may lead to the development of Fibromyalgia.

Women, individuals with family history of the disease and who have other disorders like arthritis, are more likely to be diagnosed with this syndrome.

As a treatment measure, pain relievers and anti-depressants are given to ease pain and fatigue, relax muscles and help in sleeping.

Turmeric is an herb native to South Asia belonging to the ginger family. It is scientifically known as Curcuma longa.

It has been used for generations for its numerous medicinal properties.

The rhizomes of the plant are thick and fleshy, which are boiled, dried and ground to make turmeric powder, which is used as a spice in food.

8 Awesome Benefits of Turmeric For Fibromyalgia

Studies conducted recently have identified the potential of Turmeric in treating many ailments.

The compounds Curcumin, the main active ingredient in Turmeric, is believed to be responsible for the health benefits and has been most widely studied.

Turmeric offers the following advantages to patients having Fibromyalgia: 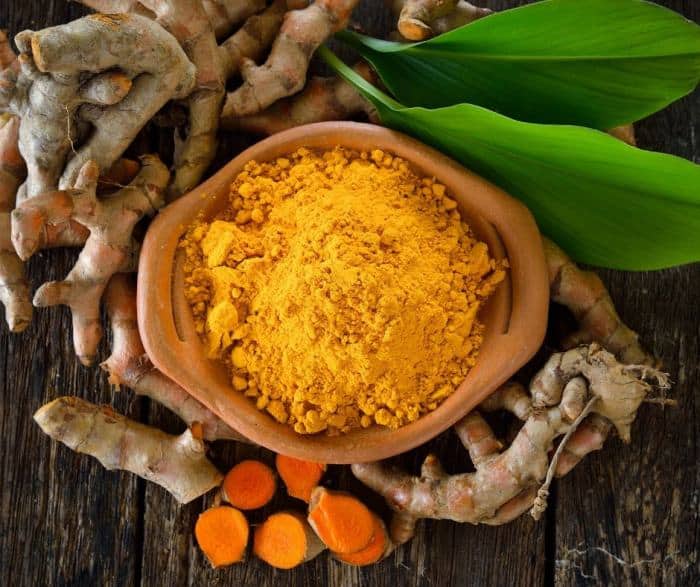 1. It helps in alleviating pain

The main discomfort among people having Fibromyalgia is the severe pain and tenderness in the muscles that affects their day-to-day functions.

Many people end up taking pain medications, which are harmful in the long run and are toxic to the liver.

These adverse side effects can be prevented by taking natural treatments to relieve pain.

Turmeric is an effective analgesic. Curcumin, a phenolic compound present in Turmeric is known to help in treating pain.

It is also believed to be much more effective than other antioxidants like ascorbic acid in relieving pain.

The pain that occurs in the case of Fibromyalgia occurs as a result of neural stimulation, which is harder to treat.

Curcumin is successful in alleviating neuropathic pain by inhibiting the expression of this protein.

It helps in the restoration of the biochemical and neurochemical factors, whose abnormality leads to pain and depression.

Flexofytol, an extract from curcumin, is used by pharmacists to treat painful conditions. It has also been used to treat pain in fibromyalgia cases with added advantages of improved muscular flexibility and function.

The analgesic effects of Curcumin are also much superior as compared to other prescribed medications like diclofenac.

Additionally, low concentrations of curcumin help in protecting the body against the toxic nature of painkillers like paracetamol, which is widely used for pain relief.

What does this mean? Turmeric can help in relieving muscular pain and headaches in Fibromyalgia patients.

2. It is an excellent anti-depressant

Anxiety and depression are the other common symptoms of Fibromyalgia and anti-depressants are prescribed to treat them.

However, some people do not respond to them, and they also pose risks of adverse effects.

Due to this natural anti-depressants are studied to provide an effective solution.

Turmeric is considered efficient and safe to use in treating disorders of depression and has great potential as a natural anti-depressant.

It is also helpful in relieving pain and depression arising from neurological disturbances.

High level of monoamine oxidase in the brain is responsible for depression and other neurological disorders.

Curcumin present in Turmeric shows anti-depressant-like effects by inhibiting the functioning of this protein.

It increases the levels of the neurotransmitters like serotonin and dopamine in the brain, which are mood enhancers and help in combating depression and anxiety.

A study conducted to examine the effects of curcumin on depression was published in the Journal of Affective Disorders in 2014 in which 56 individuals were given 500mg curcumin daily for two months.

Curcumin was able to enhance the conditions of these people by improving the mood.

Due to these effects, it is believed that curcumin can be used as an effective supplementation in relieving and preventing depression and improve the effects of other anti-depressant medications.

What does this mean? Turmeric is a natural, efficient and completely safe anti-depressant which improves neurological functions.

The active ingredient in Turmeric is known to be neuroprotective in nature and treatment with curcumin is believed to enhance cognitive abilities and memory.

It promotes the growth and development and brain tissue, which further helps in improving the brain function.

It is also able to correct the brain function by reversing impaired cognition and restoring the memory caused by stress and other neurological disorders.

Journal of Psychopharmacology reports a trial conducted on 60 older adults in which curcumin treatment helped in improving mood, concentration, and cognition.

In another study, it was found that treatment with curcumin brought about significant behavioral changes with improved cognition and protection against oxidative damage.

Also piperine, a compound found in black pepper, when given in combination with curcumin enhanced this action and gave positive results.

What does this mean? Curcumin in turmeric is beneficial in treatment and prevention of cognition and memory problems that arise in fibromyalgia patients.

4. It has anti-inflammatory properties

The exact cause of Fibromyalgia is not known.

It is believed that most often, the pain in fibromyalgia does not occur as a result of inflammatory conditions and it is perhaps neuropathic pain.

However, neuroinflammation is sometimes seen in patients.

Also, anti-inflammatory drugs are given to patients to relieve pain because these drugs can inhibit the production of prostaglandins (inflammatory mediators), which are associated with sensations of pain.

A multidisciplinary approach is taken to alleviate pain that could be caused by any reason, whether inflammation or neurological factors and ease the patient of discomfort.

The anti-inflammatory properties of Turmeric are well studied, and enough evidence is available to prove its safety and efficacy in combating pain and inflammation.

It inhibits the cyclooxygenase pathway, which leads to the production of prostaglandins.

What does this mean? Turmeric is a potent anti-inflammatory agent and beneficial for eliminating inflammation and pain in cases of fibromyalgia.

5. It is an effective antioxidant

It is believed that oxidative stress and nitric oxide play a vital role in the development of fibromyalgia.

Neurological reactions lead to overproduction of oxidative species and cause oxidative stress.

These free radicals exhibit toxic behavior and can attack the brain tissues and cause damage.

Curcumin, an active compound in Turmeric is an excellent antioxidant and protects the cells from oxidative damage.

It depicts neuroprotective behavior by acting as an oxygen radical scavenger, which can find and kill the toxins in the brain.

What does this mean? Antioxidants in turmeric help in protecting and treating neurological damages caused by toxins.

Sleep disturbances are quite common in patients with Fibromyalgia.

It is linked to the presence of other neurological conditions like depression and anxiety. Anti-depressants are used to promote sleep.

Apart from being an effective anti-depressant, turmeric is also known to improve sleep patterns. It increases the production of the neurotransmitters serotonin and dopamine, which play a fundamental role in enhancing sleep.

Turmeric has also been used in developing a herbal composition to promote sleep.

What does this mean? Turmeric acts as a sleep promoter and can be used to treat irregularities in sleeping patterns that occurs in Fibromyalgia.

7. It is anti-arthritic in nature

It is believed that persons with rheumatoid arthritis and osteoarthritis are at a greater risk of developing fibromyalgia.

Thus, arthritis needs to be treated properly to prevent the occurrence of fibromyalgia.

The anti-inflammatory and antioxidant properties of Turmeric help in the treatment of arthritic conditions and can be used as a preventive medication for fibromyalgia.

Studies have shown that curcumin in turmeric is quite safe and efficient in managing and treating autoimmune diseases like rheumatoid arthritis and osteoarthritis.

It helps in alleviating their symptoms and provides relief for the patients.

What does this mean? Consumption of turmeric can help in the treatment of arthritis and lower the risk of having fibromyalgia.

8. It helps in the treatment of Irritable Bowel Syndrome (IBS)

The reason for this is unclear, but most of the time, the patients are given medications to treat IBS and Fibromyalgia simultaneously. Also, IBS often occurs in cases of depression and anxiety.

As Turmeric has excellent anti-inflammatory properties, Turmeric helps in the treatment of IBS and other gastrointestinal disorders that occur in fibromyalgia patients by relieving the symptoms and improving their quality of life.

What does this mean? Turmeric is beneficial in the treatment of gastrointestinal disorders which occur in Fibromyalgia cases.

Dosage of turmeric for fibromyalgia

Turmeric is a very safe and versatile ingredient that can be easily incorporated in the diet. It is also beneficial to apply turmeric topically.

1-2 teaspoons per day can be safely consumed.

It can be added to curries, soups, shakes, tea, salads and many other recipes as a spice, coloring or flavoring agent.

Turmeric added to milk is considered quite efficient and makes for an excellent and nutritious supplement.

For relief from pain and inflammation, turmeric paste can be prepared by mixing with water and other essential oils and applied to the site of pain.

Turmeric has very low bioavailability and it not easily absorbed or utilized by the body.

Studies have found that the bioavailability of turmeric can be improved be consuming it with piperine, a compound commonly found in black pepper.

Thus, it will be more beneficial to take consume and black pepper together.

The exact dosage depending on the health condition can be determined by consulting with a physician or nutritionist.

Precautions while using turmeric for fibromyalgia

Turmeric is considered quite safe for use, but it poses health risks in certain individuals.

Use of turmeric has been associated with occurrences of gastric irritations, nausea, diarrhea, and dermatitis.

Curcumin in turmeric has anti-platelet activity. It is also known to interfere with clot formation. If suffering from bleeding disorders or taking anti-platelet medications, use turmeric with caution.

It has possible drug interactions, and persons with other medical conditions should always consume turmeric in low amounts or under medical supervision.

Curcumin in turmeric causes abnormalities in the gallbladder and is not recommended for individuals with gallbladder disorders.

Pregnant and breastfeeding women, children and older people should also consult with a doctor before using turmeric.

With its numerous health advantages, Turmeric is a boon for the patients of Fibromyalgia.

It helps in the prevention of the syndrome and its treatment along with helping with other conditions that may arise as a result of Fibromyalgia.

It has analgesic, anti-depressant, anti-inflammatory, antioxidant and anti-arthritic properties.

It helps in improving the neurological conditions and promoting sleep. It is also effective in treating Irritable bowel syndrome.

It is considered quite safe to use and is easily available.

READ THIS NEXT -
Can Acupuncture Help in Arthritis?
5 Reasons Why Sugar Worsens Arthritis + Foods to Avoid
6 Reasons Why Smoking Increases the Risk of Arthritis
6 Benefits of Spa & Mineral Water Therapy for Arthritis [ Science Backed]
Taking Alcohol if You Have Rheumatoid Arthritis - Read This First
6 Proven Benefits of Lavender Essential Oil in Arthritis