Among the many types of arthritis, one type is gout or gouty arthritis.

It a complex type of arthritis and it can cause burning pain, tenderness, soreness and redness in the affected joint.

The most common joint to be affected is the joint near the big toe.

The person having gout can experience a sudden attack of pain which causes burning sensation in the affected region.

Gout occurs when an excess of uric acid starts accumulating in the blood.

This uric acid starts to form crystals in the joints and the joints start to inflame.

The chances of getting gout increase if a person is taking a lot of alcohol, meat, and fish which has purines.

If left untreated, gout can reoccur several times and deform the joint completely.

It can also lead to deposition of urate crystals in other joints and under the skin. Kidney stones are also likely to develop.

To prevent further occurrences, medicines which reduce production of uric acid or help in its removal are given.

Also one can lower the risk by losing weight and limiting the consumption of alcohol and high-purine foods.

Many people opt for natural complementary and alternative medicines to prevent or treat gout and to escape the adverse effects of prescription drugs. Turmeric is one such option.

Benefits of Turmeric in Gout

Turmeric or Curcuma longa is a traditional herb from South Asia widely used for its healing powers. It belongs to the ginger family.

It is mainly utilized in the form of Turmeric powder which is obtained by boiling, drying and grounding the fleshy rhizomes.

It contains many active compounds like Curcumin, which provide many health benefits. 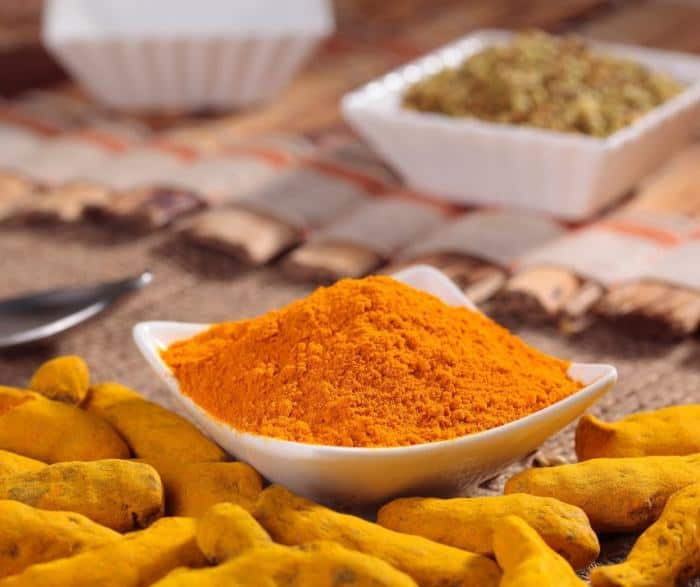 Gout attack occurs with inflammation in the joints.

The uric acid crystals deposited in the joints triggers an immune response that leads to release of immune cells and components to protect the joints.

Thus, treatment with anti-inflammatory substances is the first measure taken.

The active ingredient in Turmeric, Curcumin is known to be anti-inflammatory in nature and helps in eradicating the swelling and pain in gout.

It has been identified as a safe and inexpensive anti-inflammatory agent used for the treatment of several inflammation-related disorders.

Also, it has been proposed that it can have therapeutic benefits in the treatment of arthritis.

Clinical trials have shown that its anti-inflammatory activity is achieved by inhibition of the molecules which are responsible for inflammation.

It combats inflammation by inhibiting the following molecules, all of which play a fundamental role in the development of inflammation:

In as study comparing the efficacy of several anti-inflammatory agents, curcumin was found to be more potent than other commonly used drugs like aspirin, diclofenac, and ibuprofen.

What does this mean? Turmeric is a very active anti-inflammatory agent which can be used for treating inflammation in gout.

2. It has analgesic propensities

Inflammation of the joints causes severe and debilitating pain in gout patients. This pain affects their daily activities and their ability to work.

Turmeric treatment can be helpful in treating the pain caused by inflammation and easing the condition of the people.

The analgesic effects of Curcumin in Turmeric have been found as result of many studies.

This pain relieving effect is due to its anti-inflammatory and antioxidative activities.

In eight clinical trials involving around 606 individuals, administration of Curcumin was found to reduce pain considerably, and it was also found to be safe to use and well tolerated by patients.

A study was published in the Journal of Rheumatology and Autoimmune diseases, which described the use of a cumin extract called Flexyfytol as a supplement to treat pain in gout cases.

It was found to be very effective in relieving pain and also helped in preserving joint functioning.

Turmeric was also used as an ingredient in a pharmacological composition developed to prevent and treat joint pain.

Diclofenac and Paracetamol are two analgesics which are widely prescribed, but they have toxic effects.

The analgesic effects of Turmeric are considered to be better than the drug Diclofenac in relieving inflammatory pain.

It can also protect the body from the toxic effects of Paracetamol consumption.

What does this mean? Turmeric can treat the pain in gout patients efficiently and safely.

3. It is an antioxidant by nature

These toxic species lead to the formation of oxidative stress which is harmful and causes damage to the tissues. Oxidative stress also plays a role in the development of crystal-induced arthritis such as gout.

Curcumin present in turmeric is an excellent antioxidant which can scavenge free radicals and prevent possible oxidative damage to DNA and proteins.

What does this mean? Antioxidant activity of Turmeric helps in preventing the joints from toxins.

The kidneys are not able to remove the excess uric acid, which then gets deposited in the joints.

It can be prevented or treated by decreasing the levels of this acid.

In a study, it was found that Curcumin in Turmeric helped in lowering the urea nitrogen concentrations in the blood.

It also helped in the successful elimination of urates through urine.

Also, it improved kidney functioning and regulated those proteins which assist in the transport of urate.

Curcumin is also known to inhibit the enzyme xanthine oxidase which is responsible for the production of uric acid.

This property of Curcumin was used to develop turmeric extracts to treat diseases caused by hyperuricemia such as gout.

What does this mean? Turmeric helps in lowering of uric acid levels by various ways and preventing the disease.

Gout is an arthritic condition causing inflamed and painful joints. Turmeric has been found to beneficial in treating several types of arthritis and is a potent anti-arthritic agent.

Curcumin in turmeric helps in the safe and successful treatment of joint inflammation and prevents arthritis without any adverse effects.

It’s potential in treating and managing osteoarthritis has also been studied.

These studies show that the phenolic properties of turmeric can be used to relieve similar symptoms in other types of arthritis like gout.

What does this mean? Anti-arthritic properties of turmeric could be beneficial in treating gout.

6. It helps in weight loss

Obesity increases one’s risk of developing gout. Weight loss is suggested for people who want to prevent recurrences of a gout attack.

Turmeric can help with weight loss and aid in preventing gout. It can also reduce the chances of having gout.

In animal studies, curcumin has been proven to improve metabolism and reduce body fat and weight gain.

This effect has also been observed in human studies.

A study was conducted to investigate the effect of curcumin on obese people.

After a two-month treatment, curcumin in turmeric was able to enhance weight loss by decreasing the body fat, BMI, waist and hip circumference.

It was also well-tolerated among the subjects.

What does this mean? Turmeric aids in weight loss and management and decreases the risk factors for gout.

People with diabetes are at an increased risk of having gout due to metabolic abnormalities in their body.
Improving metabolism and regulating the blood glucose levels can be advantageous in preventing gout attacks.

Studies have shown the efficacy of curcumin in improving the metabolic status in diabetes cases.

This can help in the management of diabetes and reduce the chances of having gout.

What does this mean? Turmeric is anti-diabetic in nature which improves the metabolic conditions of diabetic patients and reduces the possibility of having gout.

Certain medical conditions like hypertension put one at a risk of developing arthritis and gout.

It is believed that high uric acid levels could be the reason for increased blood pressure.

The antioxidant nature of Turmeric helps in lowering blood pressure and suppressing any elevation in pressure levels that may occur as a result of vascular dysfunction (abnormal function of vessels).

What does this mean? Turmeric can aid in the regulation of blood pressure levels in gout patients.

How to take turmeric

While cooking turmeric is usually added as a spice to curries. imparts its yellowish pigment to the dish it is added in. besides the color, turmeric’s unique pungent flavor is also considered a delicacy.

Turmeric is most commonly used in the form of a powder where the roots of the herb are dried and ground to fine powder.

The amount to be added to curries depends on the type and amount of curry being prepared. This powder can also be added to milk and taken daily for good health.

The most important concern with turmeric is that it has low bioavailability.

This is due to the fact that the curcumin molecule is hydrophobic in nature, so it does not dissolve easily into water and water-based liquids.

However, there is a solution to increase the bioavailability i.e. to mix turmeric with healthy fats like olive oil, coconut oil, and linseed oil.

Mixing turmeric with these fats makes the curcumin easy to be absorbed.

That is why when turmeric is added to curries it mixes with the fat content and is absorbed into the system.

Another way is to take turmeric along with black pepper.

Dosage of Turmeric for Gout

Turmeric can be consumed in following forms:

A great way is to make a golden paste to take turmeric. It has both fats and black pepper.

Topical application of Turmeric is also quite useful in gout.

Turmeric paste can be prepared using turmeric powder and oil and applied to the joints to relieve pain and inflammation.

The bioavailability and utilization of Turmeric by the body can be increased by consuming it with black pepper.

Black pepper contains a compound called piperine, which increases the absorption and use of the primary compound curcumin found in turmeric.

Curcumin supplements available commercially can also be taken. The dosage depends on prevailing health conditions and can be determined by consulting with a doctor.

Turmeric as a spice is very safe. However, consuming it in high quantities can affect the health of some people, especially those with medical conditions.

It can cause biliary obstruction and is not recommended for persons with gallbladder disorders.

Turmeric is also not advised after surgery or for people having blood clotting issues as it is a blood-thinning agent and interferes with the process of clotting.

Consumption of turmeric has also been associated with the formation of kidney stones, which is harmful to a gout patient.

Therefore, in gout cases, turmeric can either be used topically or in prescribed amount.

When taken in recommended dosage, Turmeric is very beneficial for gout patients. It can improve the quality of life of people by improving the functionality of the joint and relieving pain and inflammation.

The presence of compounds like curcumin in turmeric makes it a potent anti-inflammatory, antioxidant, analgesic, anti-arthritic and anti-diabetic agent.

It also helps in reducing the levels of uric acid, blood pressure, and body weight. It is a completely natural and safe supplement for use in gout.

2 thoughts on “8 Proven Benefits of Turmeric in Gout”