Arthritis is among the most common diseases in the world.

It is known to be frequent among the elderly however it can also occur in children. Juvenile arthritis is known as the arthritic condition in children.

It is a term which describes inflammatory condition which may occur in the joints due to enhanced response of the immune system.

Arthritis mainly affects the joints nut in case of children younger than 16 years it can affect other parts of the body like the digestive tract, eyes, etc.

There are many types of arthritis which can affect the child but among these the most common one is juvenile idiopathic arthritis.

The exact cause of this condition has been hard to pin point but it has been speculated that inheriting certain genes may trigger the arthritic conditions in children .

Turmeric is the rhizome (a modified stem) of the plant Curcuma longa. It belongs to the family of the spices, like ginger and cardamom, Zingiberaceae.

This plant is native to South Asia and is used as a spice in cooking for its flavour and colour in the cuisine of these regions. It has also been used as a dye and in traditional medicine since ages.

Turmeric is rich in a variety of nutrients. These include Iron, Magnesium, Potassium, Vitamin C, Vitamin B3, fibre, α-linolenic acid, etc.

One of the most significant bioactive components of turmeric is curcumin.

Curcumin is the polyphenolic compound responsible for the yellow colour of turmeric.

This compound has been found to have health benefits. It is known to show anti-microbial, anti-inflammatory, anti-oxidant and anti-cancer activities.

Owing to these activities of curcumin, turmeric is found to be beneficial in a large number of diseases, for example, diabetes, arthritis, allergies, cancer, etc.

Turmeric’s most important activity is the anti-inflammatory action of curcumin.

Additionally, it also has pain-relieving and anti-oxidant effects which can further be useful in the treatment of juvenile arthritis.

Inflammation is the main agent of the onset and development of any type of arthritis. The attack on joints by the immune system is mediated by the pro-inflammatory molecules such as TNF-α, cytokines, interleukins, etc.

Studies have shown the presence of these pro-inflammatory molecules in the synovial fluid of juvenile arthritis patients.

PPAR-γ is involved in anti-inflammatory action by suppressing deactivating the macrophages to prevent production of pro-inflammatory molecules.

In a study, turmeric extracts were able to prevent joint inflammation in the case of rheumatoid arthritis.

In another study, turmeric was found to suppress the expression of genes involved in the production of pro-inflammatory molecules which results in reduction of joint inflammation.

Juvenile arthritis is a rheumatic disease has a most positive chance of being treated by turmeric.

What does it mean? It means intake of turmeric can help exert an anti-inflammatory action in the joints of the children with arthritis. It can reduce inflammation by preventing pro-inflammatory molecules production.

2. Turmeric can help in anti-oxidant defence

The role of oxidative stress is again a crucial aspect of juvenile arthritis, just like an adult auto-immune arthritis.

There are evidences for the role of increased production of reactive oxygen species and reduced body’s anti-oxidant defense, in the development of arthritis in children.

Curcumin from turmeric is found to have significant anti-oxidant action. It is able to scavenge various reactive oxygen species and free radicals.

It has also an ability of chelation, i.e. ability to form bonds with a metal ion. These activities of curcumin are efficient in protecting the body from damages of oxidative stress.

What does it mean? It means turmeric can be used to maintain the level of anti-oxidants in the body. This can prevent the damage related to oxidative stress and hence, can be useful in case of juvenile arthritis.

Pain is the most tormenting part of arthritis, especially for children.

Pain-killing medicines have a number of adverse effects. So, it becomes important for juvenile arthritis patients to have better options for pain relief.

Turmeric is often used for pain-relief in traditional medicine. It has also been scientifically proven to have a pain-relieving effect.

The analgesic action of turmeric has been found to significantly reduce chronic joint pain. It has also been speculated to be a better alternative than NSAIDs.

Turmeric essential oils have been found to be a better analgesic than aspirin, an NSAID.

What does it mean? It means turmeric can be very effective in reduction of the pain in juvenile arthritis patients. Since, it has been found to be a better than NSAIDs, its use can also prevent from the side-effects of these drugs. 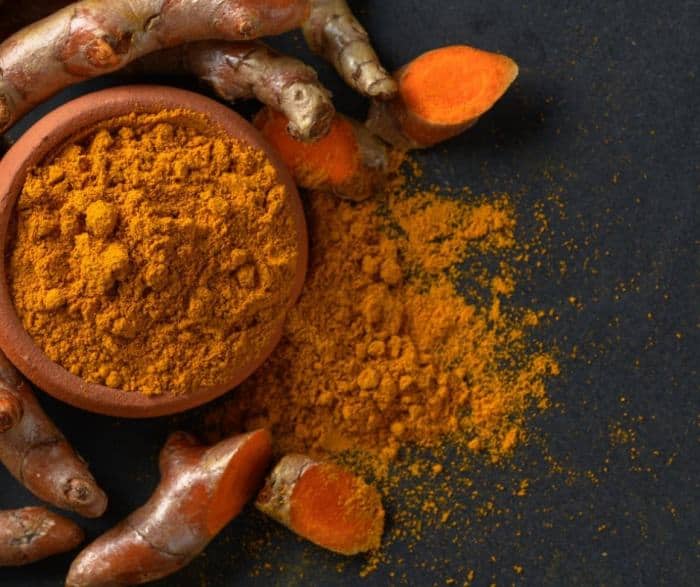 Since juvenile arthritis is an auto-immune disease, the role of immune system molecules is imperative to this disease.

Regulation of the immune response can be a very practical and efficacious approach in the treatment of juvenile arthritis.

It is also helpful in increasing the antibody response of the body, boosting the immune system.

This activity of curcumin makes turmeric beneficial for therapy of juvenile arthritis.

What does it mean? It means consumption of turmeric can boost the immunity of the body. The modulation of the immune system by turmeric can prevent the auto-immune diseases, including juvenile arthritis.

5. Turmeric can protect the stomach from side-effects of drugs

The use of common drugs like NSAIDs and other analgesics pose serious side-effects, especially in the gastrointestinal region.

Curcumin has been found to be an effective gastro-protective agent. It has the ability to prevent drug induced gastric ulcers.

The anti-oxidant and anti-inflammatory action of curcumin are able to protect the stomach from damages induced by drugs.

What does it mean? It means turmeric can be used along with the drugs used in juvenile arthritis therapy. Use of turmeric will be helpful in preventing the side-effects of these drugs.

6. Turmeric is beneficial in uveitis

Uveitis is a common complication of juvenile arthritis.

It is the inflammation in eyes that leads to swelling and destruction of tissues of the eyes. This condition can cause slight to severe vision loss.

Turmeric is a very valuable substance in the management of this complication.

Oral intake of curcumin is found to be effective in the treatment of uveitis. There was a significant improvement seen in these patients.

The anti-inflammatory action of curcumin comes in play in this condition as well. It reduces the inflammation in the eye and improves the condition.

What does it mean? It means consumption of turmeric can control uveitis and even improve its condition. As uveitis is a very common complication of juvenile arthritis, it can prove to be a boon in the children suffering from this disease.

Is turmeric safe for children?

Safety of a therapeutic product is crucial for children. What may be safe for an adult may not be equally safe for a child.

This apprehension is however of little importance in terms of turmeric’s use.

Turmeric has been used in the regular diet in the South Asian countries, especially India since time immemorial.

Turmeric is an integral part of every meal of an Indian household. Indian cuisine is incomplete without the use of turmeric. Same holds true for the Thai cuisine.

In these countries, children eat turmeric every day and no adverse effect related to it is seen.

Even in the people who rarely encounter turmeric in their diet, there have not been reports of any kind of adversity.

FDA also recognizes turmeric to be a safe food product.

Turmeric use can, therefore, be considered safe for children.

Dosage of Turmeric for Juvenile Arthritis

The dosage of turmeric in children has not been studied. Its safety can be ascertained within amounts of 500-600 mg daily.

Turmeric is not easily absorbed in the body and hence should be taken with black pepper and/or fats (healthy oils like coconut or olive oil) which aid in the absorption of turmeric.

A dose range of 1/4 to 1 tsp of turmeric powder daily is safe for children depending upon their age and vital stats.

1 or 2 pinch of turmeric powder can be included in the food preparations every day. The paste of fresh turmeric rhizome may also be used.

For pain relief in juvenile arthritis, a traditional method of taking a pinch of turmeric powder with milk can be effectively used.

Turmeric powder in the form of capsules can also be taken. The fluid extract and tincture of turmeric are also available. But their use in children should be under medical experts’ advice.

Turmeric can also be applied topically on the joints or specific affected areas to relieve pain and swelling.

Turmeric is a safe food product normally can be used without much worry.

But it is always better to practice precautions as constituents of turmeric may pose some problems with some compounds or in some conditions.

Some of the precautions to be taken with the use of turmeric are:

1. Overdose of turmeric should be avoided.
Intake of turmeric in large amounts can cause stomach upset or nausea.

2. Turmeric can cause allergy.
In people prone to allergies, turmeric’s direct contact with skin may cause irritation, itchiness or redness.

3. Adulterated turmeric must not be used.
Turmeric is many times found to be adulterated with harmful substances like lead. Such adulterants can cause severe problems in the body, sometimes even cancer.

4. Turmeric should not be taken concomitantly with any medication. Curcumin interferes in drug metabolism and hence a 3-4 hour gap should be kept between taking turmeric (mostly supplements) and other medications. Dietary turmeric is unlikely to pose such risks.

6. Gallstone patients should use turmeric with caution.
Turmeric stimulates bile juice production which may be harmful to the patients with gallstone or bile duct obstruction.

7. If susceptible to kidney stones, limit the use of turmeric as a spice. Turmeric spice is high in oxalates which should be avoided in case of gout and kidney stones.

8. Turmeric may cause mild gastric side effects. To avoid this start with low doses of turmeric and increase gradually.

Turmeric is a wonderful natural medicine with some extraordinary actions.

The anti-inflammatory, anti-oxidant, analgesic and immunomodulatory activity of its primary component curcumin are highly beneficial in the rheumatic diseases.

The immunomodulatory activity of curcumin can boost the immune system of the body, which can be highly useful in the prevention of this disease.

Its use can be considered valuable and effective in the treatment of juvenile arthritis.

Moreover, its efficacy in the treatment of the complications related to this disease and the medications used for its treatment is precious.