Rheumatoid arthritis (RA) is an autoimmune disease which means that the patient’s immune system acts against itself.

It is a common type of arthritis that causes destruction and deformity of joints.

Rheumatoid Arthritis is a multiple disorder as it also affects other organs of the body.

Omega‒3 are polyunsaturated fatty acids. There are three main types of omega‒3 fatty acids which are beneficial for humans.

These are α‒linolenic acid (ALA), eicosapentaenoic acid (EPA) and docosahexaenoic acid (DHA).

They are obtained from both animal and plant sources such as fish, flaxseed, etc.

Omega‒3 are essential fatty acids as these are not synthesized by the body and thus have to be obtained from the diet.

A novel class of bioactive lipid mediators that are synthesized from EPA and DHA enzymatically in the body are resolvins, protectins and maresins.

Omega-3-Fatty acids for Rheumatoid arthritis – Why and How they are important?

Rheumatoid arthritis is an auto-immune disorder. Thus it is only possible to manage the symptoms of the disease.

However regular medications may cause various side effects and are also not a pleasant experience for most of the patients.

But again certain natural remedies could prove to be effective in combating against the disease symptoms.

One of these remedies includes omega-3-fatty acids found in fishes and seafood.

Omega-3-fatty acids are also known as Poly-unsaturated Fatty Acids (PUFA). These are extremely important for the body and serve various functions.

Some of the chief activities in which they play a significant role are: muscle activity, digestion, fertility, blood clotting, growth, and cell division.

They are extremely important for the health of our brain as they are found in high concentration in the brain cells.

They have essential behavioral and cognitive roles in the brain.

The most important function of these fats is in monitoring the inflammatory reactions in humans.

Omega-3-fatty acids have been found to inhibit a number of inflammatory reactions in the body like leukocyte chemotaxis, expression of adhesion molecules leading to the adhesive reaction between leukocytes and endothelial cells, production of eicosanoids such as leukotrienes and prostaglandins, T-cell reactivity and production of inflammatory cytokines.

Due to all these interventions, omega-3-fatty acids are considered to be one of the best-known remedies for alleviating the symptoms of rheumatoid arthritis (RA).

Omega-3-fatty acids can be obtained in three forms from the food. The form used by the body cells are: docosahexaenoic acid (DHA) and eicosapentaenoic acid (EPA) and the one obtained from plant sources is Alpha-linolenic acid (ALA).

While EPA and DHA are responsible for the production of anti-inflammatory factors like resolvins and protections in the body.

These work at the molecular level to reduce inflammation due to arthritis. This mechanism includes the following steps:

Intake of Omega‒3 fatty acids is beneficial in many ways. For rheumatoid arthritis, it can be a part of diet therapy to treat patients. Benefits of omega‒3s in Rheumatoid Arthritis can be listed as follows:

1. Omega 3s lower the level of autoantibodies in rheumatoid arthritis

The causative factor of Rheumatoid Arthritis is an attack by immune cells of the patient against its own immune cells i.e. there is the production of autoantibodies (proteins acting against itself).

Omega‒3s have found to have a protective effect on Rheumatoid arthritis‒related autoimmunity.

Studies have shown an inverse relationship between fish consumption (animal source of omega‒3) and Rheumatoid Arthritis.

Further research is required to explore the mechanism by which omega‒3 acts to reduce autoantibodies. 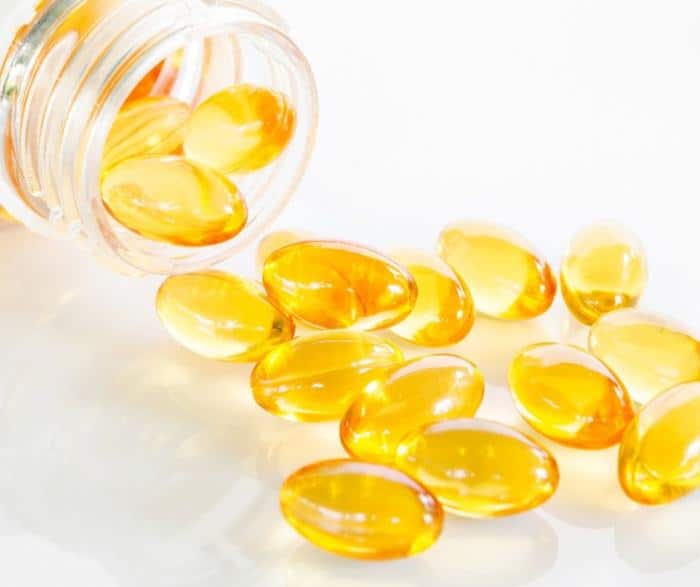 Omega‒3s, particularly DHA and EPA, have anti-inflammatory as well as inflammation resolving properties.

They inhibit cytokines such as IL‒6 which initiate an inflammatory response and further result in the activation of autoreactive immune cells (cells reacting against themselves).

EPA‒ and DHA‒ derived lipoxin, resolving, and protectin compounds play an important role in resolving inflammation by inhibiting the recruitment of neutrophils (immune cells involved in inflammation) and suppress cytokines (an inflammatory mediator).

What does this mean? The bioactive lipid mediators in Omega 3s inhibit inflammation and resolve the symptoms of pain, stiffness and swelling. This can prove very beneficial for chronic inflammatory diseases such as rheumatoid arthritis.

A significant improvement was observed in rheumatoid arthritis patients with respect to consumption of analgesics when their diet was supplemented with omega‒3s.

Intake of omega‒3s on daily basis reducesPomegranate is an excellent source of antioxidants and anti-inflammatory agents which are great for a weapon against rheumatoid arthritis the need for analgesic medication consumption.

This helps to alleviate symptoms of joint pain and stiffness in rheumatoid arthritis patients.

What does this mean? This suggests that omega‒3s act as a natural painkiller. It eases the painful symptoms of Rheumatoid Arthritis. The patient doesn’t have to depend on medications rather taking dietary supplement would resolve the symptom.

Overall, DHA exerts anti-osteoclastogenic effect by reducing the number of bone‒resoptive cells (cells responsible for the loss of bone).

What does this mean? Omega‒3s reduce bone loss by inhibiting the formation of osteoclasts. This indicates an effective resolution to prevent progression of arthritis.

It is a common finding that Rheumatoid Arthritis patients are at a high risk of cardiovascular disease.

Omega‒3 index is a quantitative measure of omega‒3 in the membrane of red blood cells which is a novel cardiovascular disease risk metric.

It also determines the risk of Rheumatoid Arthritis indirectly.

Studies in humans have shown that omega‒3 polyunsaturated fatty acids (PUFA) help in reduction of weight.

The inflammation caused by Rheumatoid Arthritis causes joint erosion which is enhanced by excess weight.

What does this mean? This means that omega‒3 fatty acids must be included in the diet to maintain healthy weight. Weight management resolves and lowers the risk of other diseases as well.

In comparison with the general population, patients with Rheumatoid Arthritis are significantly at a higher risk of developing metabolic syndrome.

A direct relationship between RA and abnormality in lipid levels has been observed.

The risk of having Rheumatoid Arthritis was 9 times higher in patients suffering from metabolic syndrome.

Fish oil supplementation has been found to improve age related metabolic changes. It significantly increases the resting metabolic rate by 14% and lowers triglyceride levels by 29%.

For patients with heart disease, combined EPA and DHA intake of 1g/day are recommended.

For patients with heart disease, combined EPA and DHA intake of 1g/day are recommended.

Although, the patient must consult the doctor in this case.

The FDA recommends no more than 2g/day dietary intake of EPA plus DHA .

If one is already on medications, one must consult the doctor before starting omega‒3 dietary intake

. Fish must be avoided in case of allergy. Skin rash and allergic responses have been reported on the intake of omega‒3 fatty acids.

One of the side effects of omega-3-fatty acids is gas, bloating, belching and diarrhea.

Thus when such effects appear patients must avoid using the supplements for some time.

If the recommended dose intake limit is exceeded it can cause bleeding. Omega‒3 affects blood sugar level and blood pressure.

So, diabetes and heart disorder patients must always consult the doctor before supplementing their diet with omega‒3.

Avoid omega 3 supplements in pregnancy and lactation unless advised by the doctor.

Make sure you get good quality omega 3 supplements free from heavy metal contamination and toxicity.

Omega‒3 fatty acids especially DHA and EPA have numerous health benefits. It is preventive against rheumatoid arthritis as it specifically inhibits the synthesis of autoantibodies.

This helps in regulating autoimmunity (immune system acting against itself) which is a very challenging issue.

Supplementing the diet with omega‒3 fatty acids has an anti-inflammatory property which helps to reduce inflammation caused during rheumatoid arthritis.

It acts as a natural pain killer which alleviates painful symptoms. The cardiovascular diseases

Omega‒3 fatty acids act as a preventive superfood in case of Rheumatoid Arthritis.

Thus, intake of omega‒3s improves and stabilizes the symptoms of chronic patients of Rheumatoid Arthritis.