Impetigo is a skin infection that is very common in children and is extremely contagious. It is most commonly caused by two bacteria called Staphylococcus aureus and Streptococcus pyogenes.

This infection is spread by direct skin to skin contact. Symptoms are generally the appearance of honey coloured scabs on the skin.

New Zealand honeys are famous for the many health benefits they provide, and one of the most well-known of these is Manuka Honey. This particular kind of honey is made by bees that take nectar from wild Manuka trees, thus giving it the name.

Manuka honey contains a compound called methylglyoxal. This is a special compound not present in other kinds of honey, and is the reason behind the unbelievable number of medicinal properties exhibited by manuka honey.

By the virtue of this compound, manuka honey has antibacterial, antifungal, antiseptic, anti-inflammatory and immune boosting effects.

3 Benefits Of Manuka Honey In Impetigo

The antibacterial effect of manuka honey due to the presence of compounds such as methyglyoxal is very well known. The effect is broad spectrum and manuka honey is effective in inhibiting the growth and the proliferation of a number of bacteria due to it.

The most common cause of the infection has been identified as the bacteria Streptococcus pyogenes and Staphylococcus aureus. There has been research into the effect of manuka honey on both of these bacteria and the results have been very promising and show a great degree of effectiveness of manuka honey against them.

In a study that was published in March 2012, the effect of manuka honey on biofilms of Streptococcus pyogeneswas seen .

During the course of the study, the biofilms of the bacteria were incubated with manuka honey and it was observed that manuka honey managed to reduce the amount of bacteria significantly.

The addition of manuka honey to the films caused a great amount of cell death and caused the cells to dissociate from other cells and the biofilm (after dissociation the cells are unable to grow and divide due to the absence of a support).

This study proves that manuka honey has immense potential in the treatment of infections caused by the Streptococcus pyogenes bacteria.

Another study that was published recently in January 2015, looked into the effect of manuka honey on Staphylococcus aureus. The results of the study were extremely promising .

During the course of the study, the bacteria was incubated with manuka honey alone and also along with four other commonly used antibiotics to study the synergy between them and the manuka honey.

The strain of S. aureus that was used is called methicillin resistant S. aureus or MRSA and it is resistant to most commonly used antibiotics.

It was found that manuka honey had a potent inhibitory effect on the S. aureus bacteria. The mechanism of this was believed to be due to the manuka honey causing an interruption in the process of the division of the bacterial cells.

What it means?
Studies show that manuka honey is extremely effective in the inhibition of the bacteria (S. aureus and S. pyogenes) that cause impetigo infections in the skin. 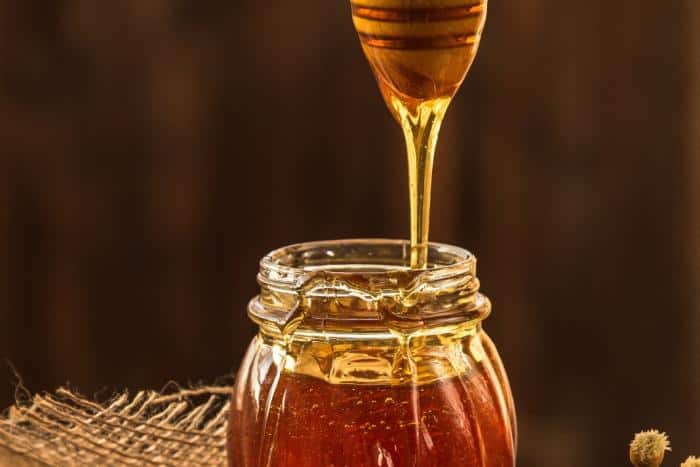 A study published in February 2014 looked into the influence of manuka honey and three other different kinds of dressings on the pH and the environment of the wound . The manuka honey dressing was found to have a very low pH that indicates an acidic environment in the wound.

An acidic environment is essential to the process of wound healing as it reduces the risk of infection and also increases the effect of antimicrobial action . It has been observed that in alkaline to neutral pH wounds, the risk of infection is far greater and the healing of the wound takes a lot longer time.

The findings of this study, therefore, proves that manuka honey can succeed in creating an environment within the surface of the wound where healing can take place faster and more efficiently.

What it means?
Manuka honey maintains a moist and stable pH in the infected area in and around the blisters and scabs formed by the infection. Additionally its skin regenerating potential facilitates healing and treatment of the scars in impetigo.

Inflammation in impetigo is characterised by redness near the patches. Tomblin et. al demonstrated that manuka honey exerts its anti-inflammatory effect by acting on Toll like receptor pathway.

This pathway plays an important role in cell proliferation, immune response and inflammation.

What it means?
Manuka honey exerts anti-inflammatory effect which can help in reducing redness and swelling in impetigo.

How to use manuka honey for impetigo?

For oral consumption, manuka honey being a natural food does not have any specific dosage. For the best results it is recommended that it be consumed in between meals 1 teaspoon three times a day, daily.

Manuka honey is best taken alone and not along with food. It may be dissolved in cold or warm water and consumed. But in such a case, care should be taken that the water is not too hot to avoid degradation of compounds in manuka honey.

Some people may be allergic to honey. Hence a patch test 48 hours prior to consumption is recommended to avert possibly dangerous situations. This allergy is more common for people that already suffer from bee or pollen allergy.

Children below the age of 12 months should not be made to consume manuka honey, for fear of botulism poisoning.

Store bought manuka honey always has a UMF (Unique Manuka Factor) rating based on the amount of methylglyoxal present in the honey. For best results, always a rating of 10 or higher should be used.

Manuka honey can be used as a very effective treatment option for the skin infection impetigo. The manuka honey has a direct antibacterial effect on the bacteria that most commonly causes the infections, and there have been studies to prove this.

1 thought on “3 Benefits Of Manuka Honey In Impetigo”