A large number of people, especially women, suffer from candidiasis or yeast infection.

Yeast is a single-celled fungus which has the ability to multiply and form chains consisting of a large number of cells.

Yeast is useful in many ways. It is used in the production of alcohol and for baking bread and other foods.

Yeast also lives in the human body in small numbers.

It aids in the absorption of nutrients and fastens the process of digestion.

However, an increase in the number of these organisms can lead to infections such as candidiasis. This is caused by a particular species of yeast, Candida albicans.

Even though this infection does not cause much harm, it is painful and causes a lot of discomforts.

Researchers have found that coconut oil can be used for treating candidiasis due to its various beneficial properties.

What is Coconut Oil?

Coconut oil comes from the fruit of the coconut tree. It is extracted from the kernel of coconuts. This oil has a number of uses because of all the health benefits it has.

Coconut oil can be applied regularly on the hair to promote a healthy growth and good quality of hair. It gives shine and strength to hair and reduces their roughness.

A massage with coconut oil improves the quality of skin and keeps it moisturized.

It reduces dryness along with wrinkles and scaly skin. Coconut oil is also good for improving the symptoms of some skin disorders.

Another benefit of coconut oil is that it reduces cardiovascular risk. It is good for the heart as it keeps the cholesterol levels down. It also maintains the blood pressure at a normal level and prevents it from increasing.

Coconut oil contains antibacterial and anti-inflammatory properties. These are useful in healing wounds and treating infections and diseases. 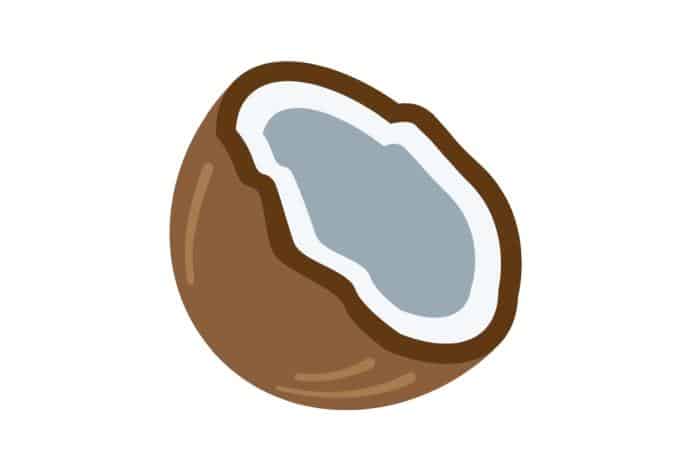 1. It has anti-fungal property

Coconut contains natural fatty acids such as caprylic acid, capric acid, and lauric acid. These are said to possess antimicrobial and antifungal properties.

The coconut tree produces a number of products such as coconut oil, coconut water, coconut kernel etc. which are said to contain antibacterial, antifungal, antioxidant and anti-inflammatory properties among others.

Studies have reported that capric acid and lauric acid are highly effective in killing yeast cells and can be used for the treatment of fungal infections.

These fatty acids control the growth of Candida and cure the symptoms while preventing any further damage to the affected areas.

Some other studies on the effects of coconut oil on yeast showed that Candida albicans is susceptible to coconut oil and so it can be used as an antifungal agent. It can be used even when yeast develops resistance to other commonly prescribed drugs.

The antifungal property of coconut has been proved in various studies and it can be said that it effectively kills yeast and prevents any further growth of yeast infection.

Oral yeast infection, also known as oral thrush, occurs when yeast begins to accumulate inside the mouth and on the tongue. The species of yeast particularly responsible for causing this infection is Candida albicans. It is a type of fungal infection caused due to overgrowth of this yeast and improper functioning of the immune system.

This infection can cause a white layer of the fungus to develop on the tongue and oral tract. This is painful and leads to difficulty in eating food. Proper treatment and medications can cure this infection.

A traditional method of treating candidiasis is oil pulling. In this method, you simply take in a small amount of coconut oil in the mouth and move it around for some time before spitting it out.

Coconut oil contains natural compounds such as glycerol monolaurin. This shows protective effects against microbes and fungus. Research studies have observed positive effects of monolaurin in treating candidiasis. However, this has only been studied in laboratories and not in the human body.

Oral candidiasis can be treated by the traditional method of oil pulling. This prevents the uncontrollable growth of yeast in mouth and cures the symptoms effectively.

Yeast infection taking place on the surface of to skin is known as cutaneous candidiasis.

This type of infection can cause a red, itchy, and scaly patch to appear on the skin. Like other yeast infections, this is also caused by the unusual growth of yeast on the skin.

However, they do not spread by touching, i.e., they are not contagious.

Coconut oil has been found to show antimicrobial properties. It can be applied to the skin as it is effective against skin infections.

Coconut oil, in addition to killing yeast due to its antifungal property, also moisturises the skin and reduces the dryness and patchiness.

Vaginal yeast infection is very common and women are very likely to experiences it at some point of their lives.

Candida albicans is a species of the fungus yeast which lives inside the vagina and maintains a healthy environment.

However, when the growth increases abnormally due to the continuous multiplication of yeast, it may cause this infection.

The main symptoms of vaginal candidiasis are itching, white discharge and burning sensation inside the vagina.

A disease known as vulvovaginitis can occur due to an imbalance of yeast. This causes inflammation of the vagina along with itching and abnormal vaginal discharge.

Studies have shown that an imbalance of pH and the microflora of vagina caused due to yeast may also lead to this disease.

Coconut oil contains medium chain fatty acids (MCFAs) such as lauric acid. This contains antifungal property which kills the excess yeast and treats the infection upon application in the vagina.

Coconut oil helps in controlling the overgrowth of yeast and maintains a healthy vaginal pH and microflora. This prevents the onset of diseases such as vulvovaginitis.

Coconut oil is a natural product. Pure coconut oil has no added chemicals and is totally safe.

These are all harmless to the body. Instead, they promote good health by eliminating the risk of various diseases.

Coconut oil can be either applied to the affected area or can even be consumed and added to the daily diet. It is an edible oil so it is even used in a cooking a variety of foods.

Hence coconut oil is beneficial mainly due to its role in maintaining a good health and because of its nutritional properties.

Coconut oil is relatively safe and does not show any known side effects on the body.

The symptoms of skin yeast infection such as dry, scaly, itchy and red skin can be treated with coconut oil. Studies have shown the coconut oil helps in the moisturizing dry skin and cures the scaly and patchy skin while providing instant relief.

Candidiasis can usually cause a lot of pain and soreness in the affected areas. This is mainly prevalent in the oral cavity, vagina or the skin.

Studies have found that coconut oil contains analgesic properties. This means that it can be used as a pain reliever.

Along with this, it also has anti-inflammatory and antipyretic (preventing fever) properties.

Coconut oil is effective in curing the symptoms of different types of yeast infections. These primarily include pain, soreness, redness and dry and scaly skin.

7. It boosts the immune defenses

A weak immune system allows yeast to easily enter the bloodstream and infect other organs of the body. The infection spreads from one part of the body to another due to this.

Yeast multiplies when and wherever it finds sufficient nutrients and a hospitable environment.

Metabolic adaptations of the yeast play a very important role in this. If a person has weak innate immunity, yeast can easily multiply and adapt its metabolic pathways according to the host.

This means that coconut oil shows positive effects on the immune system when included in the diet.

Coconut oil strengthens the immune system and prevents yeast to further infect any other body parts of the host.

Coconut oil used should be 100% pure. This means that there should be no added chemicals in the oil. Chemicals are other externally added substances may cause harm to the body on the application.

People should always test coconut oil for any allergic reactions before using it. If they are allergic to coconut, they should never use it and should consult a doctor for other medications.

Another thing to be kept in mind before using coconut oil to treat yeast infection is that the person should be sure of the infection.

One should always get tested and confirm if its candidiasis or not before using coconut oil for its treatment.

Coconut oil has numerous advantages in treating yeast infections. It improves the symptoms of candidiasis. These include dry and scaly skin, redness of the affected area, a white layer on the tongue and cheeks, pain and soreness etc.

Coconut oil also has antifungal properties which helps it to kill yeast and control its growth.

Although it cannot be used as the only treatment method, coconut oil can be used along with other prescribed medications to allow faster treatment of the infection.

READ THIS NEXT -
Cinnamon vs Chromium for Blood Sugar
5 Ways Argan Oil Benefits Skin and Fights Ageing
5 Proven Reasons Why Aloe Vera is Great for Yeast Infections
How is Kelp Different from Seaweed?
3 Benefits of Spirulina For Melasma [Science Backed]
15 Foods to Fight Constipation