The thyroid gland is a part of the endocrine system of the body and secretes a hormone that regulates a variety of functions in the body.

Overproduction of the thyroid hormone leads to Hyperthyroidism.

Hyperthyroidism may be caused due to high levels of iodine in the blood, inflammation or tumor in the thyroid gland or large amounts of thyroid hormone taken in the form of supplements.

Medications are available to treat conditions of hyperthyroidism. In severe cases, surgery may be recommended.

Research studies evaluating benefits of Kelp, marine brown algae have found that its consumption on a regular basis or its use as a drug candidate can treat hyperthyroidism.

What is Kelp and what are its Benefits?

Kelp is a large seaweeds that grow in shallow oceans. These are brown algae enriched with vitamins like vitamin A and B complex vitamins.

They are also a rich source of iodine and various other minerals.

It is commonly consumed as a sea vegetable that is highly nutritious.

Various research studies are going on to determine the effects of kelp on hyperthyroidism due to its high iodine content and thus recommending its consumption in people suffering from hyperthyroidism is considered quite controversial at the moment. 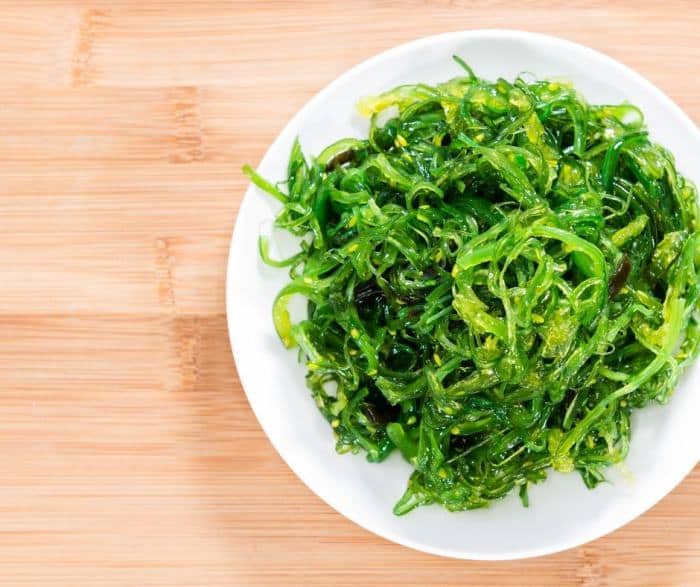 But is Kelp Safe for Hyperthyroidism?

1. Kelp is a Natural Source of Iodine

Iodine is a very important mineral found in the body that has vital functions necessary for growth and development. It is required to produce hormones by the thyroid gland.

These thyroid hormones, in turn, play other functions like regulating bone and brain development in infants.

However, if iodine content in the body is not controlled high levels can lead to hyperthyroidism resulting in the overactive thyroid gland.

Kelp is a natural source rich in iodine, and thus its consumption for the treatment of hyperthyroidism is controversial.

This should be around 1g of kelp, but the iodine contents vary with every species of kelp.

Different species contain different iodine quantities, and thus it is important to be aware of the amount of iodine you are taking in your diet from particular kelp containing food product as this can have an impact on the thyroid gland.

2. Overconsumption of Kelp tea can cause Thyroid Toxicity

A study published in the Journal of General Internal Medicine in 2006 describes the case of a 36-year-old woman suffering from hyperthyroidism.

The woman consumed herbal tea containing kelp for one month in the past.

However, her symptoms worsened.

The study observed recovery in the patient when the kelp containing tea was discontinued from her diet and she was in turn treated with anti-thyroid drugs.

This happened due to the high levels of iodine present in kelp that lead to thyroid toxicity and an enlarged thyroid gland in the woman.

It was also observed that although the recommended dietary intake of iodine-containing kelp is 1,500 to 2,500 µg/g, the woman consumed 580 to 990 µg daily which is double the amount recommended allowance i.e., 150µg.

The study recommended that patients suffering from thyroid-related medical conditions must refrain from the consumption of kelp or any other iodine supplements without prior consultation from a doctor. [2]

Another similar study published in Endocrine Abstracts in 2010 reported a case of toxicity of the thyroid gland induces on the consumption of kelp in a 59-year-old woman.

Reportedly she was consuming two tablets containing kelp for the treatment of a sluggish thyroid gland, however, the study found that kelp that contains high amounts of iodine increase concentrations of thyroid hormones in the woman leading to hyperthyroidism.

Her symptoms resolved quickly on cessation of kelp containing supplements from her diet.

Despite the withdrawal of the supplements the woman required to undergo an anti-thyroid drug therapy to cure the overactive thyroid gland completely. [3]

3. Kelp Supplements may cause Hyperthyroidism in Healthy Individuals

Few studies have reported that ingestion of kelp supplements have caused transient hyperthyroidism in healthy individuals.

A research paper described the case of a 50-year woman who consumed six kelp tablets containing iodine around 200mg each for weight loss.

She developed hyperthyroidism within two months of daily consumption of the tablets.

This case strongly points to the ill effects of supplements containing high levels of iodine in the thyroid gland. [5]

Another case published in BMJ Case Reports in 2014 reported the case of a 45-year-old woman who had no thyroid disease but was following kelp containing diet for weight reduction.

The woman acquired hyperthyroidism followed by hypothyroidism after two months.

This caused toxicity of the thyroid in the woman due to high levels of iodine content in the kelp containing diet.

The study emphasized the need for awareness of side effects like thyroid dysfunction on the consumption of high iodine-containing supplements like kelp that are being promoted for quick weight loss. [6]

Kelp has found to be beneficial in tackling symptoms and causes associated with hyperthyroidism.

However, more studies are needed to ensure its safe consumption for this condition.

It contains various essential bioactive components that play an important role in enhancing its nutritional properties.

But several case studies have shown that kelp supplements may not be safe for hyperthyroidism.

It is advised not to take kelp supplements for hyperthyroidism without doctor’s consultation.