About This Article
11 brands analyzed for rankings. 17 hours spent in research. 70+ references used for information.

Chitosan is a type of fiber derived from the outer cover or shells of crustacean species like shrimps, crabs, lobster, etc. Recently chitosan gained popularity as a weight loss aid and to lower cholesterol. [1] [2]

It has many pharmaceutical uses too like wound healing, anti-inflammatory, gum-disease, insomnia, etc. [3] [4]

It is also used as the filler in many capsules, and as a drug delivery carrier in order to control the way certain drugs dissolve; and to mask bitter tastes. [5] [6] [7] [8]

How does it work?

Chitosan fiber when moving through the intestines binds to the fat present in the intestine and carries it along out of the body, preventing it from being absorbed back into the body. [9] [10]

Chitosan shows a potent anti-microbial effect especially on gram-negative bacteria owing to its ability to dissolve and break the outer cell membrane of the bacteria which ultimately leads to the death of the bacteria. [11] [12]

Here is a quick comparison of the top chitosan supplements in the market today.

Reviews of the Best Chitosan Powder

Here are the reviews of the best Chitosan Powder available in the Market today.

Bulk Supplements is among the most popular brands in the health supplement world.
The Nevada-based company has as many as four hundred natural products sold at affordable prices.

Chitosan is a natural fiber sourced from shells of crustaceans such as crabs, lobsters, shrimps, etc.

It also prevents constipation and promotes digestive health in general.

This supplement is better taken along with ascorbic acid to enhance its health benefits.
It is lab-tested for purity and packaged in a resealable pouch to keep out possible contaminants.

Key constituents of the supplements – 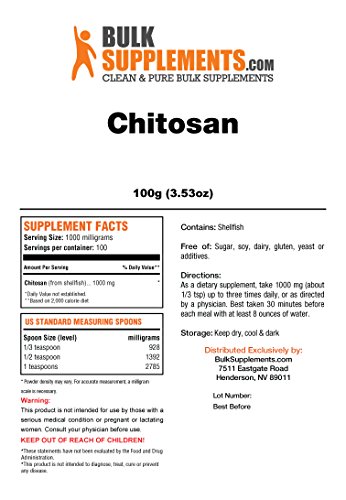 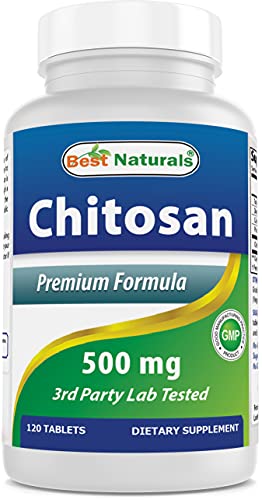 A pill supplies the body with 500mg pure chitosan, a dietary fiber obtained from crustaceans’ shells.

It can also be used to treat or prevent constipation, as it adds to stool bulk and promotes bowel regularity.Key constituents of the supplements – 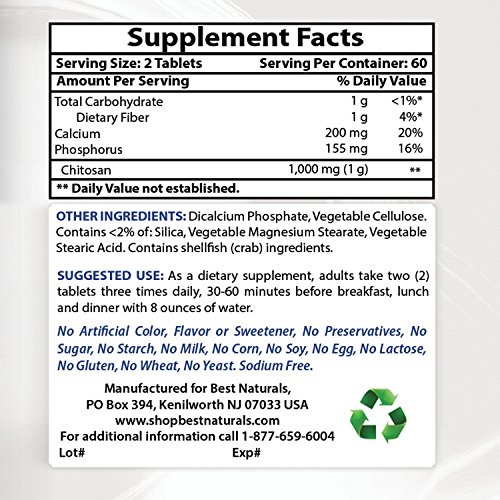 NOW is a trusted and renowned nutrition company established in the late 1960s. The brand has a line of high-quality natural products, including protein powder, maca, probiotics, among others.

One capsule of this supplement delivers 500mg of pure chitosan, a popular weight loss supplement gotten from shells of crustaceans like lobsters, crabs, etc.

Here are some of the key health benefits of Chitosan.

The brain is the most vulnerable organ with the restricted ability of self-repair if and when injured.

Mechanisms and strategies that help protect against any brain or central nervous system injury is termed as neuroprotection system.

Recently, chitosan has gained a lot of attention as an all-natural neuroprotective agent.

This enzyme is responsible for the development as well as the progression of Alzheimer’s disease (AD). [13] [14]

There are few test-tube studies reporting that chitosan helps prevent oxidative stress and cytotoxicity in the brain caused by infection and/or due to drug overuse. [15] [16] [17] [18]

Some studies showed that chitosan can stop neurons from dying and inhibit tau protein formation thus, blocking the AD progression. [19] [20] [21]

In animal studies with Parkinson’s disease, it was demonstrated that chitosan can inhibit brain cells from dying (apoptosis), protect the mitochondrial membrane potential (MMP), and relieve oxidative stress. [22]

Similar results were found in animal studies for Huntington disease, chitosan can reduce the oxidative stress on the central nervous system (CNS). [23]

Several test-tube studies show that chitosan can combine with almost all the neurotrophic factors in the human body that can help with nerve cell regeneration. [27] [28] [29] [30] [31]

Chitosan can restrict the growth of many multi-drug resistant pathogens including bacteria, fungi, viruses, and phages without increasing resistance. It is widely used as a wound dressing ointment to help repair the wound as well as protect against microbial infection. It is also used as a preservative in many packaged food.

Infections and infestation is not only major concerns in the pharmaceutical industry but in the food industry too.

There are more than 1100 studies published so far reporting the antibacterial activity of chitosan and its derivatives.

Chitosan has been traditionally used as an ointment for wound healing owing to anti-inflammatory and anti-microbial properties. [32]

The exact mechanism is still uncertain although scientists proposed that chitosan can bind to the outer cell membrane of the bacteria thus destroying it protective barrier and causing its death. [33] [34] [35] [36] [37]

It has been suggested that chitosan and its derivatives suppress viral infections and block the replication of the virulent phage in both plants and animal models.[40]

There are few experiments showing that a chitosan derivative (N-carboxymethylchitosan-N,O-sulfate) can stop the reproduction of HIV-1 in mouse cell lines. [41] [42] [43] [44] [45]

Although there are very few human trials most of them show promising results in-effect with chitosan’s antimicrobial activity.

Chitosan and its derivatives have been commonly used for its tissue regenerating and wound healing properties such as in patients undergoing plastic surgery. It can interact with the skin stem cells, helping in rapid wound healing. It has many applications in the field of tissue engineering.

Tissue engineering consists of reconstructing or regenerating damaged biological tissue in situations such as lesions, infections, and traumas.

Chitosan is considered to be the only natural polysaccharide with the ability to bond with mucous tissue, termed as mucoadhesiveness, this property has spiked great interest in tissue engineering research. [48] [49] [50] [51]

Chitosan with platelet-rich plasma (PRP) has been shown to improve joint muscle pain and cartilage repair in an animal study. [52]

Chitosan has been effectively used to treat nerve grafts and may also prevent diabetic ulcers. [60] [61]

Few studies showed that using the chitosan and honey together significantly increased the healing process of the burn wounds in animal models. [62] [63]

Chitosan has been used as a bonding agent or cementing agent to help close punctured lungs and blood vessels to avoid any hemorrhages. [64] [65]

Chitosan owing to its potent anti-microbial property can also lower the chances of wound infections. [66]

Recently, chitosan is hyped as a weight loss aid. Most of the research shows that chitosan along with a low-calorie diet results in a small amount of weight loss. But taking chitosan without restricting calories intake does nothing to improve weight loss.

In short, chitosan can help with weight loss in overweight and obese people only if paired with a restricted calorie diet and exercise.

A 24-week long clinical with 250 participants conducted at the University of Auckland showed that although the chitosan group lost more body weight as opposed to the placebo group.

But statistically, the differences were very small when compared to the placebo group. [67]

Results obtained from a total of fifteen different research studies with a total of 1219 participants showed a very insignificant effect of chitosan on the weight loss and were unlikely to be of any clinical significance. [68] [69] [70]

On a contrary, a study conducted in overtly obese and overweight patients supplemented with 3 grams of chitosan daily for 12-weeks showed a significant decrease in their LDL cholesterol level. [71]

Another study for the two-week period, treating eight normal weight adult males, with chitosan showed that cholesterol intake decreased from 340 to 276 mg/day.

Although the results were not that significantly longer treatment duration is needed to confirm chitosan effectiveness. [72]

Another mode of action demonstrated in animal studies is that chitosan can produce a highly viscous gel in the stomach thus increasing the satiety this may result into decreased food intake. [73]

5. Chitosan can help in the drug delivery system

The biodegradability and biocompatibility properties of chitosan and its derivatives make them perfect candidates for an oral as well as a sub-cutaneous drug delivery system. These polysaccharides are deemed extremely malleable and non-toxic substitutes to the current synthetic and harmful drug delivery agents. [74] [75]

6. Chitosan may be used as an alternative anti-cancer treatment

Chitosan and its derivatives are top runners as chemotherapy and radiotherapy alternatives for many drug-resistant tumors.

Cancer is the second most common cause of death after heart disease, and according to the World Health Organization the death toll may cross 10 million people by 2020. [85]

The current age conventional anti-cancer drugs generally produce severe side effects like reducing the patients’ immunity and energy to fight against the cancer and infections.

Therefore, it is important to find new, powerful anticancer agents that are highly effective but also with little to none side-effects.

Chitosan have been reported to selectively break into the cancer cells and kill them by various physiological actions. [86]

As discussed above chitosan can help boost the drug delivery system as well as improve the effectiveness of chemo-and radio-therapies.

Test-tube studies have shown that chitosan can also restrict the development and progression of various types of cancer cells. It can also make these cancer cells more sensitive to radiotherapy. [91] [92][93] [94] [95]

Most of the studies supplementing chitosan for weight loss study used dosage between 2 to 3 grams per day for a short term ranging from 7 days to 12 weeks.

It is always advisable to consult with an expert or a doctor before starting these supplements or any other dietary supplements.

Chitosan is considered safe for most people when taken orally or when applied to the skin for a short time. Care should be taken for those allergic to shellfish.

But it is known that most people allergic to shellfish are actually allergic to it meat and not the outer shell itself, so there is some divided views regarding the same.

Research shows constipation and upset stomach as possible side effects of chitosan.

In certain cases, it may impact the absorption of calcium and vitamins A, D, E, and K.

Chitosan may interfere with blood thinners like warfarin as well as some antiviral and diabetes medications.

There are some rare cases reporting of arsenic poisoning caused by long-term use of chitosan supplements.

Due to a lack of research, it is advisable to restrict supplementing chitosan in children, pregnant and/or breastfeeding women.

Does chitosan work for weight loss?

As mentioned above chitosan has mixed results with respect to weight-loss aid. Most of the studies confirm that chitosan only helps in weight-loss when combined with controlled calorie intake diet and exercise. But taking chitosan without cutting calories, doesn't improve weight loss.

Kindly refer the above section to learn more about its mode of actions.

Chitosan is believed to be effective in kidney disease and kidney failure.

In a small clinical trial 80 patients with kidney failure receiving ongoing hemodialysis treatment, half of the patients were given 1,500 mg of chitosan daily for 12 weeks and the other half did not receive any supplement.

The data from this study showed a significant decrease in urea and creatinine levels. Although the exact mode of action is still unknown and requires more investigation.

What is the difference between chitin and chitosan?

Chitin is the building material of which the outer shells of crustaceans (shellfish), insects, and the cell walls of certain fungi are made up of.

Upon enzymatic or chemical deacetylation, chitin is converted to chitosan.

Chitin has no known medical or industrial uses, Chitosan and its other derivatives, on the other hand, are well-known for their innumerable uses and applications.

Does chitosan cause constipation?

Chitosan is a long-chain polymer and difficult to digest. The most common side effects associated with chitosan supplementation are constipation, vomiting, cramping, and nausea.

The higher the fats content in the diet, the worse these side effects are. Other instances reported overdosage of chitosan.

Chitosan has several health benefits and taking supplements is one way to get those benefits. Check out the list of the best Chitson supplements below, you can click on the links to check the specs, reviews, and offers from Amazon -