Of the many weight loss remedies that we have heard, the one that says sleep your way to lose weight sounds ridiculous!

After all, sleeping is a sedentary activity how can it make you lose weight and burn fat?

Now what we tend to miss is that sleeping is not a weight loss remedy; it is one of the best health tips that you can exercise to ensure good health and well being.

However, we will go over the different ways in which lack of sleep can lead to weight gain which tell us why we should never ignore our sleep habits.

Why is Sleep so Essential for Health?

We always think of sleep only when we are tired but sleep plays multiple roles than just getting rid of fatigue:

How Does Lack of Sleep Cause Weight Gain?

A meta-analysis of 16 studies covering the responses of 285,452 adults showed that both long sleep and short sleep are associated with a risk of weight gain.

Not only lack of sleep but sleep problems are proven to be risk factors for weight gain.

Studies demonstrate that short sleep is associated with elevated BMI and prevalence of obesity but this casual link has a number of causative reasons which we shall explore.

Shorter your sleep duration, the more irritable you are and eventually more hungry.

A study was organized where hunger ratings were compared after 1 night of sleep deprivation, one night with a short sleep of 4.5 hours and one with 7 hours.

Compared to 7 hours of sleep, the volunteers reported double the hunger after total sleep deprivation and 50% higher hunger after the short sleep.

A single night of interrupted sleep is found to leave individuals less full in the afternoon and more desirous of eating after dinner compared to a night of good sleep.

The possible explanation for this is that levels of appetite-regulating hormones - ghrelin and leptin are affected. Ghrelin stimulates hunger while leptin does the opposite.

A study conducted in healthy men reported 18% decrease in leptin, 28% increase in ghrelin and 24% increase in hunger as a result of 2 days of sleep restriction.

What does this mean? Good sleep controls hunger and prevents unusual rise in appetite hormones.

Glucose tolerance refers to the body’s ability to take up glucose from the blood and return blood sugar levels to normal.

Insulin is the hormone that mediates this action.

A study of partial sleep deprivation reported a 40% lower glucose tolerance in 6 nights of 4hr sleep compared to 7 nights of 12 hour sleep.

Another study depicted that sleep deprivation for a week reduced insulin sensitivity by 11-20% and glucose tolerance by 14%.

Sleep deficiency also leads to abnormal fluctuations in growth hormone and an increase in stress hormone-cortisol which reduces insulin sensitivity.

What occurs as a result of these changes is that glucose ingested gets stored as fat rather than being utilized as energy.

Subsequently, lack of sleep increases intake of energy which is what we will be covering next.

What does this mean? Adequate sleep can ensure effective metabolism and utilisation of glucose and preserve insulin sensitivity.

3. Sleepiness can affect your food choices and make you crave for fat rich foods

Lack of sleep disturbs your cognitive performance which can in turn affect your food choices.

A study conducted in University of Pennsylvania investigated the effect of sleep restriction on calorie intake.

The study revealed that sleep-restricted subjects consumed more calories on the days that they had short sleep.

Also, their daily calorie intake increased due to larger meals and higher proportion of the calories came from fat.

These calories from fat were mainly consumed in late night hours or evening hours which means shorter sleep results in nigh time snacking.

In men and women with normal BMI 5 nights of short sleep was associated with increased calorie intake and most of it coming from fat, particularly saturated fat.

Another experimental study found that bedtime restriction was associated with increased calorie intake from snacks.

A recent study conducted in 2010 compared the effects of 2 nights of 4 hour sleep with 2 nights of 8 hour sleep only to reveal that subjects increased calorie intake by 22% and fat consumption increased by 98% on short sleep days!

A study reported that total sleep deprivation led to increased hunger and ghrelin levels as a result of which they landed up choosing larger portion size next morning irrespective of the food type.

Now this one is really interesting.

Instead of going for laboratory settings, this 3 week study was conducted in real life settings- at home! 10 overweight individuals who slept for 6.5 hours or less were recruited for this study.

After baseline measurements for 1 week, sleep time was extended to 8.5 hours for 2 weeks.

At the end of the study participants reported to be less sleepy. Appetite decreased by 14% and desire to eat sweet or salty foods decreased by 62%.

That's how much of a difference 1.6 hour extended sleep can have!

What does this mean? Good sleep reduces your cravings for fatty foods and keeps you alert enough to consume appropriate portion size.

4. A number of metabolic costs are involved with lack of sleep

One study showed that two nights of total sleep deprivation led to a reduction of resting and post-meal energy expenditure in the range of 5-20%.

To the contrary, another study reported a 7% increase in energy expenditure after 1 night of total sleep deprivation.

A review study covering all these aspects reports three ways by which sleep loss can affect our metabolism:

What sense we can make of those studies that depict rise in metabolism after sleep deprivation is that the rise is not strong enough to compensate for increased calorie intake leading to subsequent weight gain.

What does this mean? Adequate sleep protects you from metabolic disturbances. 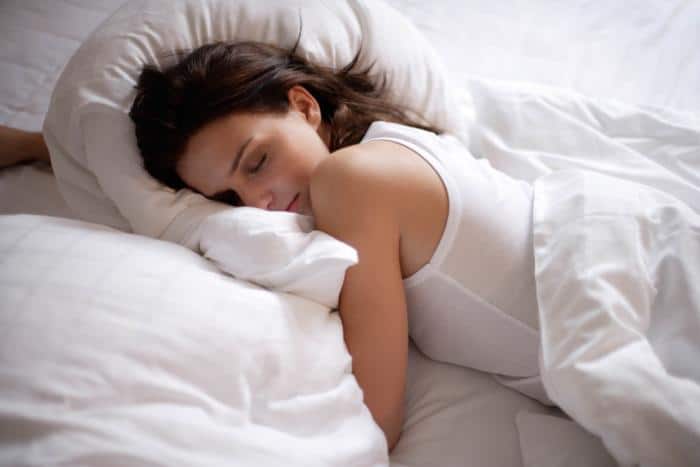 And in face of increased calorie intake, this leads to weight gain.

One study states that sleep deprivation of 30-72 hours does not affect exercise-related parameters but decreases the time to exhaustion.

However other research works do support the link between sleep deprivation and lack of physical activity.

What does this mean? A night of good sleep propels your exercise performance which torches excess calories.

6. Lack of sleep can undermine your efforts to lose weight

A study was conducted wherein 10 overweight individuals were given a moderately restricted diet and either 8.5 hours or 5.5 hours of sleep at night.

Researchers concluded that sufficient sleep is required to maintain muscle mass during calorie restriction and lack of sleep can disturb the output of weight loss intervention.

A study conducted in Canada enrolled 123 overweight and obese mean and women for a weight loss program.

Along with other measurements, sleep quality was also assessed.

Overall weight loss was around 4.5kg out of which 76% was from fat stores. Interestingly those who had good sleep quality experienced greater fat loss.

It was concluded that good sleeping habits can influence the success of weight loss program.

7. Disturbance of sleep hormone can cause fat to accumulate

The ones exposed to 12 hour cycle and continuous dark period had similar melatonin-‘sleep hormone’ levels.

However, those exposed to continuous light had low levels of melatonin and also increased visceral fat depot despite having a lower food intake than other groups.

So don’t forget to switch off the lights next time you hit the sack.

8. Inadequate sleep can increase your genetic tendency to gain weight

A study including 297 children reported that variations in obesity genes can influence the tendency of children to gain weight as a result of sleep deprivation.

Another famous study conducted on twins reported that the risk of inheriting high BMI was twice as large with sleep duration of 7 hours compared to the duration of 9 hours. Short sleep increases the genetic risks of body weight gain.

What does this mean? Better sleep suppresses the genetic vulnerability of increasing weight gain.

How Should you Change your Sleep Habits?

National Sleep Foundation has come up with new recommendations for ideal sleep duration:

Here are a few things you should keep in mind to ensure good sleeping habits:

Make it a point to schedule your work in such a manner that it does not deprive you from sleep.

Studies that establish a link between lack of sleep and high BMI sometimes do not take into account differences in physical activity, diet or genetic factors.

And when we say that sleep helps in weight loss, we don’t mean that sleeping for hours together will make you wake up to chiseled or hourglass figure.

Good sleep is an indicator of good health and good sleep will ensure that your weight loss efforts pay well and will also result in a more alert and calm you.