Fibromyalgia is the second most common type of arthritis after osteoarthritis.

It is characterized by chronic pain and palpitation at specific muscular sites.

The muscular sites become tender and weak in this condition. The probable cause for the disease is not certain and a number of factors can be responsible.

Most of the patients do not feel relief from simple allopathic medication.

Hence complementary and alternative treatment is mostly preferred by these patients.

Reiki is one such alternative treatment which is employed by many patients with fibromyalgia.

Reiki is derived from Japanese which means “universal life energy”. It is an ancient Eastern medicinal practice which involves touch therapy.

It is said to increase body’s natural ability to heal as it relieves the pain, reduces stress, induces relaxation and promotes the overall well-being of the body.

Reiki practitioners believe that every human has an aura of energy surrounding them. An increase or decrease in this energy results in pain, discomfort and health ailments.

Thus by Reiki, patients’ mind, body, and spirit could be brought in harmony thus helping in balancing the energy surrounding the patient.

In ancient times such practices were not considered to be of much use by the general practitioners owing to the lack of scientific data and facts in support of this technique.

But now more and more health professionals are realizing its significance. 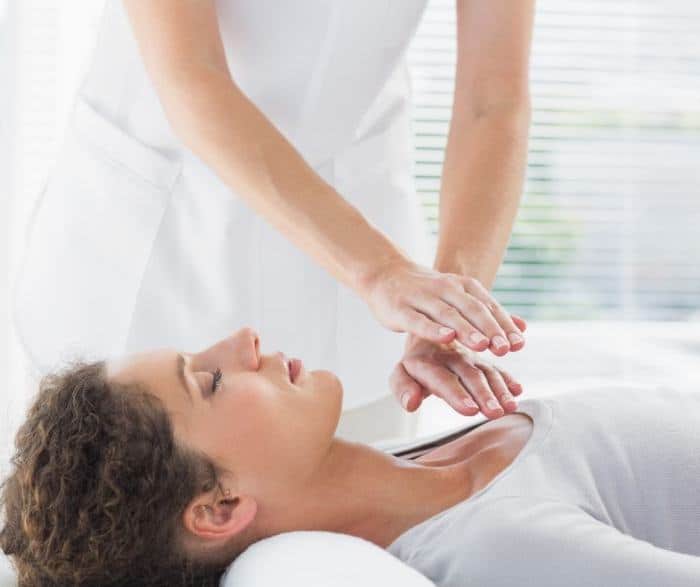 Reiki and Fibromyalgia- How it works?

Reiki is a hands-on holistic approach that includes healing by transfer of energy from the practitioner to the recipient.

It could be performed by either skimming the fingers over some parts of the body or moving the hands-on few inches of the body depending on the area of discomfort.

For patients with fibromyalgia, it helps reduce pain, soothes the muscles and even results in reducing stress and depression induced by the disease.

It must be noted however that Reiki is not a cure! It is just a means to boost the body’s immune system and general well-being.

These Chakras are considered to be the centers of reception, assimilation, and expression of life’s force energy.

Thus through these Chakras, a trained practitioner is said to transfer energy in the form of soothing touch.

Many patients fall asleep while a session of Reiki owing to the loss of fatigue and discomfort during the session.

It thus is very effective in reducing stress, depression and calming the nervous system in patients with fibromyalgia.

Scientific Evidence to prove the efficacy of Reiki

Reiki is a holistic approach is not studied elaborately by many scientists.

It is an experience and people who benefit from it vouch of its importance while for the rest it still remains a mystery.

However, there is no denying the fact that therapeutic touch, which forms a major part of Reiki, does have positive effects on patients with fibromyalgia.

One of the study published in 2004 tested the efficacy of six different types of therapeutic touch therapies on patients with fibromyalgia.

Thus this study suggested that touch therapy can be an effective way of treating patients with fibromyalgia.

This study was followed by another study that tested tactile stimulation as a complementary treatment for patients with fibromyalgia.

This study recruited 10 female patients with signs and symptoms of fibromyalgia. These patients received tactile stimulation therapy for a period of 10 weeks.

All the patients were tested for their perception of pain and discomfort at a regular interval and the results obtained showed that most of the patients benefitted from the therapy.

The bodily pain was decreased and the perception of well-being was restored in most of the cases. Patients also reported improved sleep patterns after the therapy.

This cohort of patients was followed up after a period of 6 months in which through their disease symptoms had relapsed but with reduced severity.

Thus this proved that with regular use touch therapy can help patients with fibromyalgia.

However this is just one side of the story.

Contrary results have also been reported. For instance, one pilot study tested the effectiveness of Reiki and touch therapy in particular for patients with fibromyalgia.

Subjects constituted of 100 adults that were divided into groups each receiving either Reiki treatment from a Reiki master or touch therapy from an actor.

The sessions were repeated twice weekly for a span of eight weeks.

Towards the end of this study both the groups reported similar results without any considerable improvements in pain and discomfort due to fibromyalgia.

Such results thus force oneself to doubt the use of Reiki as a treatment option for fibromyalgia.

However, it could be argued that this study was performed on a small set of individuals and the exclusion criteria for the patients was not clearly defined which might affect the end results .

Also reports about the effectiveness of energy healing and touch therapies are more in number compared to the results against this ancient practise. Studies conducted in the past claim touch therapies as an alternative treatment option for people with orthopaedic disorders . Thus need of the hour is a more directed approach to establish the true picture regarding the use and effect of this method for patients with arthritis.

Thus it can be concluded….

… That science supports the effectiveness of Reiki and touch-related therapies for patients with fibromyalgia but lack of data in this regard cause some concerns.

On the positive hand, no side effects have ever been reported due to Reiki and thus it is safe and can be tried by most of the patients.

However, due to the lack of any well-designed study conclusive results still appear to be a thing of future.

We can thus expect that in the coming years this ancient method of treatment catches the attention and curiosity of some researchers who then can unravel the true mystery behind its efficacy.

What to expect during a Reiki session?

A typical Reiki session can last from half an hour to an hour and a half.

For patients with fibromyalgia, it is advisable to have Reiki therapy once a week and no less than once a month.

During a Reiki session, patients must wear comfortable clothes. One is usually asked to sit or lie down in a comfortable position and relax.

After this, the therapist can start the session which involves minor touch or skimming of fingers over the affected areas of the body.

Most of the people benefit a lot from these sessions and feel extremely refreshed after the treatment.

However, some people might report just contrary experiences. This might be owing to some doubts or inhibitions on the part of the recipient or inexperience of the practitioner.

As Reiki involves the transfer of energy between two living systems and includes a spiritual and holistic approach to the treatment, hence submission to the therapy is of utmost importance.

Thus having faith in the technique and your therapist is crucial for successful results.

Reiki as a medical technique is harmless and is not known to have any side effects on the patients.

However, some precautions must be followed in order to avoid any unpleasant experience. These precautions are as follows:

Reiki is a holistic approach to healing and relieving the pain and suffering amongst the patients.

It is believed that during a Reiki session energy is transferred from one person to another and in this way a healing effect is experienced.

There are stories from the personal experiences of many individuals where Reiki has done wonders and improved the quality of lives of numerous patients with fibromyalgia.

However, at the scientific front data is scarce.

Nevertheless, it is an ancient methodology of healing and is devoid of any adverse effects on the patients.