The rheumatoid arthritis is among one of the most common types of arthritis which can affect both the young and the old equally.

Rheumatoid arthritis is a type of an autoimmune system where the immune system of the body starts to attack its own cells and tissues.

The immune system of the body begins to produce antibodies against the cells and tissues and then releases them into the bloodstream.

These antibodies reach these targeted cells and attack them which results in inflammation.

The typical symptoms of rheumatoid arthritis include soreness, stiffness, pain, swelling, and redness around the joints.

The condition of arthritis can be caused due to the inheritance of certain genes which are triggered due to certain environmental conditions.

Other causes include infection by bacteria or virus and change in hormones.

Chilli is a fruit obtained from sub-shrub of the chili.

The dried ripe fruit of this shrub is used as a delicacy which is added to food items and sauces. The chili plant belongs to the Capsicum genus and is a perennial plant which has a very pungent odor and taste. Many different species of the chili plant are commonly grown and found in India.

The pungency and the spiciness of the chili plat vary from species to species ranging from mild to hot.

The dried powder of the chili is very popularly added to curries and dishes for flavoring. These chilies are also added to sauces for a hot flavor.

Almost all the fruits of the chili plant have a compound named capsaicin.

This compound is what gives the pungent odor and taste to the chili fruits and decides the extent of heat. This compound is further made up of seven other alkaloids (capsaicinoids) which are responsible for the unique taste of the chili.

Three of these alkaloids cause a strong sensation towards the back of the throat and the palate while tow capsaicinoids leave a burning sensation on the tongue.

Not many people are aware that the capsaicin found in the chili fruits can be used as a treatment for numerous medical conditions including rheumatoid arthritis.

It can be used as a counter-irritant for arthritic disorders and it is also used as a pain reliever in some pain balms. The dehydrated forms of green chili are considered a good source for vitamin C.

Capsaicin is the compound present in the tissues of chilies.

It is concentrated mainly on the placental tissue (on which seeds are held), inner membranes and slightly in the flesh of chili.

This compound is a neuropeptide releasing substance, i.e. a compound which helps in the transmission of signals to the brain.

It is an irritant to mammals. When a mammal’s tissue (including humans’) comes in contact with this compound, a burning sensation occurs.

Its ability in signaling to the brain by binding with certain receptors makes it useful as an analgesic (pain-reducing substance).

The most common chili species used to extract capsaicin are Capsicum annum and Capsicum frutescens.

Capsaicin is effective in rheumatoid arthritis mainly as an anti-inflammatory and an analgesic substance.

This interaction proceeds through the ion channels, i.e. by a flow of ions inside or outside the nerve cells/ neurons.

Pain is the most troublesome aspect of arthritis. The first and foremost treatment strategy involves the reduction of pain.

Capsaicin has a unique mechanism of reduction of pain. It is actually a pain-producing compound by activating certain nociceptive (pain causing) neurons.

The repetitive contact of capsaicin with these neurons reduces sensation and deactivates them alleviating the pain.

Ion channels are a type of protein that serves as a gate and control the ions entering the cells.

There are six subfamilies under TRP and they are activated in response to hot or cold stimulus.

The Transient Receptor Potential Vanillod 1 receptor (TRPV1) belongs to this family and is activated in response to capsaicin, heat, inflammatory mediators etc. TRPV1 has different functions based on its location.

It is located at the end of nerve fibres and is responsible for the detection of pain, heat, and chemicals.

Earlier it was thought that capsaicin brings about the depletion of substance P, a brain-related chemical involved in pain sensation, from the affected nerve fibers and this leads to pain relief.

However, this no longer considered to be the case now.

Capsaicin is a member of vanilloid family of compounds such as vanillin from vanilla, eugenol from cloves, etc.

Capsaicin binds to TRPV1 and brings about a similar reaction in the brain as that caused by heat.

Therefore initially when you apply capsaicin based cream you experience warmth, itching and burning sensation.

Application of capsaicin based ointments or creams has been found to be an effective way of reduction of arthritis pain.

Studies have shown the potential of capsaicin in the treatment of rheumatoid arthritis pain. The pain has been found to decrease significantly.

What does it mean? It means capsaicin is useful in reducing the pain related to rheumatoid arthritis. It does so by interfering with molecules involved in transmission of signals through neurons.

Inflammation of the synovial tissues is the main cause of rheumatoid arthritis.

These molecules cause the thickening of the protective pad (synovial tissue) at the end of the joints by causing inflammation.

This affects the proper movement of the joints as lubrication between them degrades as well. This causes stiffness in the joints.

Capsaicin is able to inhibit responses of many of these pro-inflammatory molecules such as prostaglandin E2, COX-2 enzyme, etc.

It has been also found to induce anti-inflammatory action in case of rheumatoid arthritis, by releasing somatostatin.
Somatostatin is a molecule that has an inhibitory action on inflammation and pain signals.

What does it mean? It means application of capsaicin can reduce the inflammation in joints in rheumatoid arthritis. Capsaicin is capable of inhibiting various pro-inflammatory molecules. It can also induce production of certain inflammation inhibiting substances in the tissues itself. 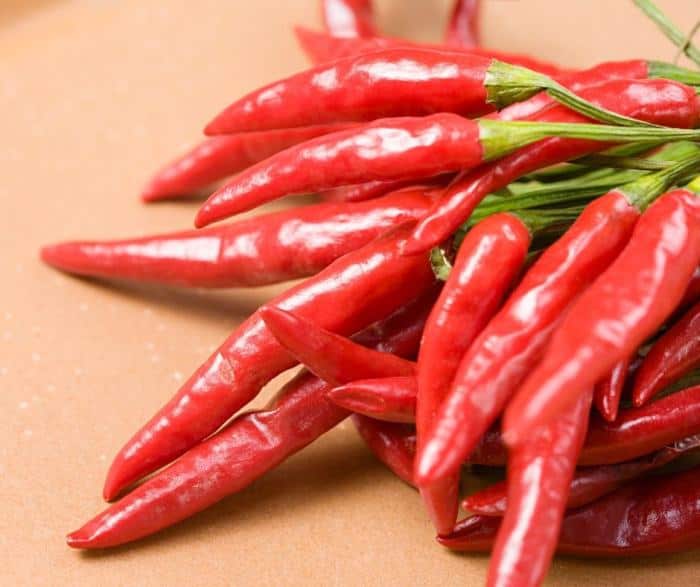 Oxidative stress has a key role in the destruction of cartilage in the case of rheumatoid arthritis.

It has been found that in rheumatoid arthritis patients, reactive oxygen species production is at an elevated rate and anti-oxidants levels in the body decline.

Many components of chilies are antioxidants.

These include polyphenols, carotenoids, flavonoids, etc. These components have radical scavenging and anti-proliferative actions.

Many varieties of chilies are also rich in anti-oxidant vitamins like Vitamin A, Vitamin C, etc.

These further add to the anti-oxidant capacity of the chilies.

Vitamin A has shown its efficacy in rheumatoid arthritis treatment by its immunomodulatory (modification of immune system response) action.

What does it mean? It means inclusion of chillies in diet can be beneficial against the oxidative stress in body, which has a role in development of rheumatoid arthritis. The anti-oxidants from chilli can scavenge the reactive oxygen species and modify the immune system. These actions are able to prevent cartilage destruction thus, resulting in an effective treatment of rheumatoid arthritis.

Dosage of Capsaicin In Rheumatoid Arthritis

Capsaicin is mainly used in the form of creams, ointments, lotions or gels to alleviate the pain.

These are applied to the skin of the affected area.

The concentrations of capsaicin in these medications vary between 0.025% and 0.1%.

The application of the capsaicin creams, gels, lotions or ointments can be done 3-4 times a day.

Capsaicin is also available in the form of high dose patch (8%).6 These are applied by medical practitioners in the affected area. These are used once in 3-4 months.

Chilies can also be included in the everyday diet but only a limited amount is recommendable.

Capsaicin being a natural irritant produces a burning sensation on the skin, which is normal.

But sometimes these effects may be elevated and there can be some additional problems.

Therefore, some precautions must be taken while using capsaicin or chilies.

Some of these precautions are:

Chilies/ capsaicin are a very effective natural product in the treatment of rheumatoid arthritis.

Capsaicin is an extraordinary compound that has exceptional pain relieving action. It is also a very effective anti-inflammatory substance.

The analgesic action of capsaicin is a unique mechanism which works on the sensory neurons.

Its anti-inflammatory action is by inhibition of many pathways and molecules that are involved in an inflammatory response.

Chilies have many anti-oxidant compounds as well.

Use of capsaicin/chilies along with exercise and other lifestyle changes can show very affirmative results in rheumatoid arthritis patients.