Rheumatoid Arthritis is the most common type of arthritis.

It is an autoimmune disorder in which immune cells cannot differentiate between the self-body cells and the foreign cells and began to attack self-cells.

This autoimmune attack leads to the production of many inflammatory components in the body which further leads to the auto-activation of the immune cells.

Due to this progressive inflammatory response, the tissue in joints gets damage to a level of disability if proper treatment is not received.

Rheumatoid arthritis affects almost every joint in the body but hands, feet, wrist, and knees are affected the most.

Along with the joints, it also affects several other organs also like heart, lungs, eyes, and mouth.

Though rheumatoid arthritis is less common than other types of arthritis like osteoarthritis yet it affects more than 1 million people in the USA.

This disease is more common in old age people above 40 years of age and women are more affected by it than men. Around 7 out of every 10 rheumatoid arthritis patients are women.

The cause of this autoimmune disorder is unknown to scientists and doctors.

Hence complete root treatment of the disease is still a challenge but if detected at an early stage its symptoms can be reduced to almost nil.

Tea can be used as one of the natural product to treat arthritis.

What is tea and what are its health benefits?

Tea is a very popular beverage.

It is consumed in almost every corner of the world with different recipes.

Tea is the processed product of the leaves obtains from the Camellia sinensis. This tea plant is grown in various tropical and subtropical regions of the world.

Tea has many components in it which are very beneficial for human health.

These components contribute to the various properties of the tea including antioxidant property, anti-aging, anti-diabetic, anti-apoptotic, chelating, anti-inflammatory property etc.

Tea also contains several bioactive components such as astea polysaccharides, thianin and polyphenols like theaflavins which help in the prevention of various chronic diseases like cancer, cardiovascular diseases, and arthritis.

On the basis of methods of production, tea can be of four types –

Out of these four teas, green tea and black tea is considered as very good for health. Caffeine is present in all types of tea, but they are also available in decaffeinated form.

Some herbal teas are also prepared which are made out of the leaves, flowers, and roots of plants other than common tea plant.

How does tea help in rheumatoid arthritis?

Rheumatoid arthritis is caused due to high inflammation in the joints due to uncontrolled production of several inflammatory cytokines and pro-inflammatory enzymes.

So it is necessary to control or modulate this inflammation to fight arthritis.

Tea being an anti-inflammatory agent can be very beneficial for this.

A study conducted by Tang et al to study the effect of catechin on arthritis. Through this study, it was found that catechin reduces the appearance of secondary inflammatory symptoms like swelling, pain, etc.

It was also found that catechin also inhibits the interleukin-1 and TNF-alpha which are responsible for inflammation.

It further inhibits secretion of inflammatory cytokines. And catechin is the major component of all types of tea.

Tea contains several antioxidant compounds that add to its antioxidant properties. These include phenolics like falavan-3-ols, epicatechin, caffeic acid, and alkaloids, etc.

Conjugates of quercetin and kaempferol are also present in a significant amount. All these compounds are known for their strong antioxidant activities.

Hence tea helps in maintaining the oxidative stress of the tea. The oxygen radicles produced due to the autoimmune response in the rheumatoid arthritis patients.

Several studies have been conducted to test the antioxidant activities of the tea and positive results were obtained in almost all. 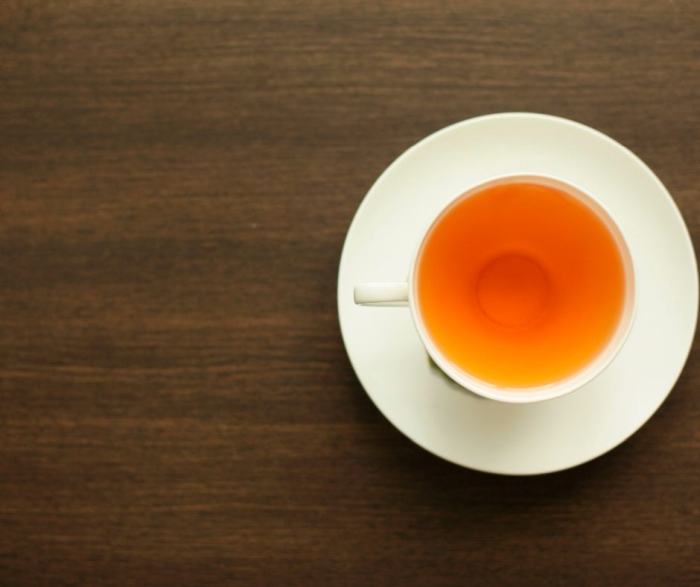 Here is a list of teas that are scientifically proven to help in rheumatoid arthritis.

Green tea is considered as most healthy tea among all the types of teas available.

Due to least process time involved in its production, it has all the quality of the tea plant intact in it and a little amount of processivity but then white tea provides it nice texture and taste and also intoxicated.

Rosenbaum CC et al in their study mention that green tea can be used as the antioxidant and anti-inflammatory supplement for the treatment of rheumatoid arthritis.

Meki AR et al study the antioxidant status during rheumatoid arthritis after being treated with green tea and vitamin C for 45 days.

They found a significant increase in enzymes concentration responsible for the breakdown of oxidative species after 45 days.

It was concluded from the study that green tea and vitamin C effectively control the disturbed oxidation level during rheumatoid arthritis.

It acts as a chemo-preventive agent in inhibiting the development of arthritis.

They proposed that green tea improve the symptoms of the autoimmune diseases by modulating the expression of CD-4 receptor on the T helper cells. T- Cells play a very important role in regulating autoimmune functions.

Green tea shows better improvement in arthritis in combination with DMARD-infliximab compared with infliximab only.

Epigallocatechin-3-gallate is one of the active ingredients of green tea.

In a research study, it has been proposed that this epigallocatechin is very effective in arthritic diseases.

It can interact with various drugs and complement their activity. It has anti-rheumatic activity.

It also protects bones and cartilage during inflammation.

The catechins in tea have an anti-obesity effect. Green tea has been found to decrease obesity by increasing fat oxidation and decreasing energy absorption.

What does this mean? Green tea is very beneficial in controlling oxidative stress in patients suffering from rheumatoid arthritis. Polyphenols present in green tea has the potential to globally suppress the inflammatory response in the arthritic tissue. Use of green tea for the treatment of arthritis can decrease the dependence on heavy drugs for treating arthritis. Green tea also benefits in weight loss which benefits in arthritis.

So it is not found as effective as green tea against arthritis.

But there are few studies which suggest that black also has a role to play in the treatment of arthritis.

Chattopadhyay C et al in their study on rats and human immune cells, throw light on the immune-modulatory properties of black tea.

Some pharmacological studies on black tea also suggest that black tea has the potential to act as both antioxidant and anti-inflammatory agent.

It is very beneficial in a chronic inflammatory disease like rheumatoid arthritis.

Ramadan G et al study the anti-inflammatory activity of black tea as compared to green tea in the arthritic rat. The result of the study shows that black tea is also very effective in the treatment of arthritis.

Though doses require are high in case of black tea as compared to black tea.

What does this mean? Black tea is a potential anti-inflammatory and antioxidant against the rheumatoid arthritis.

It is the least consumed type of tea and also least popular among scientist and medicinal experts.

Very few studies have been conducted on its effects on arthritis even less than black tea.

A research study examined the effect of tea on the physical functions of older people.

They compare the effect of three types of tea viz. black, green and oolong. The result shows that oolong is equally effective in maintaining physical balance in adults at old age.

What does this mean? Oolong tea can help in maintaining good physical condition even at old age. And can reduce chances of arthritis at old age.

Apart than above mentioned Camellia sp. tea several other herbal plants or herbs are also used to prepare tea in a different part of the country or herbs are just added to the tea to increase its nutritional efficiency.

These herbal teas are known for their several health benefits, arthritis is one of them.

Jain et al in their study on the antioxidant activity of tea with some herbs shows that addition of herbs to the tea increase the number of various types of phenolics and flavonoids in the tea and hence the tea with herbs provide best antioxidant activity as compared to tea as an individual entity.

A herbal tea known as Cat’s Whiskers tea is specially produced to treat arthritis is obtained from the leaves of Orthosiphon stamineus also known as Balbas Pusa in some regions.

Tabana et al conducted a study to test the anti-inflammatory activity of the herbal tea made from this plant.

In their study, they found that Cat’s whiskers tea is very effective in reducing inflammation and also have anti-arthritic properties which can help in treating rheumatoid arthritis.

What does this mean? Herbs with green tea or herbal tea in itself can help in the reduction of arthritis symptoms.

Dosage of Teas For Rheumatoid Arthritis

There are different methods of consuming tea and those only depend on the taste of the consumer.

Some people prefer adding lemon in green tea to add taste. Herbs like ginger and tulsi can also be added to the tea to increase its beneficial effects.

Some people prefer adding lemon in green tea to add taste. Herbs like ginger and tulsi can also be added to the tea to increase its beneficial effects.

Studies suggest that 3 cups of tea per day is good for health in the case of rheumatoid patients. More than this is not recommended on a daily basis.

It has been seen from above-mentioned studies that tea can be very effective in treating rheumatoid arthritis.

But there are few studies which suggest otherwise.

Lee et al through meta-analysis shows that high consumption more than 4 cup of tea and coffee increases the chances of rheumatoid arthritis.

Another study by Karlson et al also shows the same effects of the high consumption of decaffeinated coffee.

Mikuls et al also show that the consumption of decaffeinated coffee and tea increase the risk of rheumatoid arthritis.

A study on oolong tea shows that it can be responsible for serious symptoms like blood vessels block and hypokalemia (low potassium level in blood).

And it should be taken care that tea is not adulterated or decaffeinated as caffeine helps to maintain the number of polyphenols and catechins in the tea.

Tea is the cheapest and most easily available beverage worldwide. It can be consumed on a daily basis without any harm if its dosage is taken care off.

Its antioxidant and anti-inflammatory properties make it an ideal natural remedy against rheumatoid arthritis.

Among the various types of teas, green tea is found to be most effective against rheumatoid arthritis.

It reduces all the major symptoms of arthritis and provides a healthy lifestyle to the arthritis patient.